Luff and Understanding: Playing away from the puck and how "it’s not always just about scoring" - LA Kings Insider

Largely pushed aside yesterday was the coverage of Matt Luff’s first day of the season with the big club, which ended with two hits and two shots on goal over 9:16 of action, which included a shift on the power play. “I thought he played his role well, he was big, he was strong along the boards. You can see he gets himself into some scoring spots,” Todd McLellan said after the game.

More on Luff’s directives and purpose (from Tuesday), and what the winger knows he’ll have to do to get a firm footing at the NHL level:

Todd McLellan, on Matt Luff’s recall:
Obviously, Lewie went on IR, and he’s not going to be available to play in these next two games, for sure, so it opens up a roster spot. Matt Luff has been recalled. Luffer, throughout training camp, he probably didn’t have the camp that he wanted to have – or, at least, we didn’t see it that way. Went down and kind of got his game going. Got a bit of an awakening down there and then really got going and deserves to be recalled. We’re excited about seeing him play, and he will play to see what he can do now. Was it us missing some things at camp, or was it him missing some things at camp? It really doesn’t matter anymore. What matters is ‘what are you going to do now?’ and ‘how can we use you?’ and that’s what we’ll be trying to figure out.

McLellan, on Luff previously feeling obligated to provide offense:
You feel like you have to be a scorer to play in the NHL. There’s 32 teams, there’s only 32 leading scorers on each team, so that kind of limits your opportunity to be the top guy. Yes, you have to contribute, but the puck’s on your tape only a really small amount of time during a game. What are you doing the rest of the night? Odds are you’re on the ice between 12 and 20 minutes, especially if you’re a forward. Puck’s on your tape for 45 seconds of that time, what else is happening? What ends up being a tough thing for players is that they are drafted as scorers, they’re drafted as offensive players because they have good numbers, but once they get here, they have to figure out their niche, and it’s not always just about scoring. And maybe Luffer did overthink offense, but he’s found his game now. We’re going to see that tonight. Hopefully we’re going to see a really good game from him.

McLellan, on Luff believing his role to be to score goals:
I’ve used the words – self-evaluation is really important. You’ve got to know who you are and what you do well, and bring that first, and where that takes you within a night is exactly what you need as an individual, and it happens to lead to a goal, then great. It might lead to seven or eight defensive plays, and that helps us win, too. We just want him to play a good, solid, hard game. That sounds like coach talk, but that’s really what it is, and let’s get a real positive viewing of him and feel good about him and him feeling good about himself.

McLellan, on whether there was “one” item he’d like to see the Kings clean up against Minnesota:
If it was just that easy, just to say, ‘hey, one thing.’ Continually we’re fighting special teams. When we get a power play goal, we seem to give up two penalty kills. We haven’t won the special teams battle very often, and when you’re a team in our situation, you almost have to do that to be successful, so that’s a huge thing for us. The resilience, or the bounce-back. We’ve seen goals given up quite quickly, bang-bang. We’re trying to eliminate that. There’s still some things that we’re doing really well, so we want to grow on that. I tend to talk about the negatives, but there are some things that we’re doing well. We want to continue to be a heavy forechecking team, create chances off of that. Going back to the resilience – we had a choice to make the other day in Montreal, and individually we had to make it, and collectively I thought we made a good decision. We fought through some adversity. It didn’t look like it was going to go our way, and that was a good choice that the players made. Signs of being resilient, and then there’s other signs of not being resilient. So, lots of things to clean up.

Good backcheck by Luff. Fanned on a shot at the other end but recovered and was able to shake off Spurgeon to create separation. Low-to-high pass handcuffed Ryan a bit, but he returned to help snuff out a MIN rush.

Matt Luff, on getting recalled:
I think the big thing for me recently is every shift I think I have to be a lot harder, and I just made sure I was going back to my old ways. I think getting cut that early kind of put me down a little bit, but me and Stutts talked about it and used it for motivation. You can see it in my play – it’s been a lot better since we had a little hiccup there in Ontario, but I think it put me back on the right path. I think now getting this recall, it’s just showing I can play here, and each time I’m in that lineup, it’s about sticking in it and giving ‘em reasons why they can’t take me out.

Luff, on any correlation between the types of assists he was earning:
I think it was just using my linemates. Had a few this weekend. Having Frky on that left side on the circles is very beneficial. You throw it anywhere in his wheelhouse and it’s going in. Guy’s got an unbelievable shot. But once the points started coming, it kind of brought my confidence back, and it was just about going back to the details and making sure when I was out there I was working hard, and I think that’s really where the points come from, is when you’re working hard, that’s when you’re not gripping the stick too hard or you’re not putting too much pressure on yourself to get ‘em.

Luff, on team camaraderie demonstrated during a recent brawl:
Yeah, I think it starts from day one with Stutts. He’s all about team-first. I think you look at it in the O-zone, it’s three guys in front of their goalie at any whistle, and in our zone, it’s five guys around Cal to protect Cal and protect your teammates. When we go in those scrums, if you looked, we had five guys in there and some teams only had three. But I think at the end of the day, I think the perfect example was Iowa. You’re down one going into the third, and came in and said ‘believe in each other’ because we’ve got the talent in here, and we walked out with the win there. We had a good group and I think we know what we can do, and I think it’s … a team that could go on a good run. So, I think just believing in each other is the big thing.

Luff, on having roommates rather than living as a houseguest with the Moulsons:
It’s been good. I’ve got Cal in Ontario. Basically, we were living two guys in a three-bedroom house [with] Walks on the road a lot. I think he paid rent for all October and I didn’t see Walks twice. So, I mean, we’ve just been collecting the check from Walks. But it’s nice. Obviously having Mouls last year was huge for me, and we still probably talk once or twice a week now. He’s still a guy I look up to and he’s my role model. But, it’s nice. At the end of the day, living with whoever’s kind of fun, especially in California.

Luff, on things he wants to clean up from his game when it’s not going well:
I think I’m cheating for offense. I’m thinking about one side of the puck and not both sides. This year, we brought in Hajter (Ontario Assistant Coach Chris Hajt) again, and he’s really put me on the PK for the first time in probably a long time since I’ve been on that. So, he’s giving me a different look on both sides of the puck, and when I’m playing my best, I’m on both sides of the puck and not creating chances and not cheating for offense. I have that ability to be an offensive player, but defense leads to offense at the end of the day. 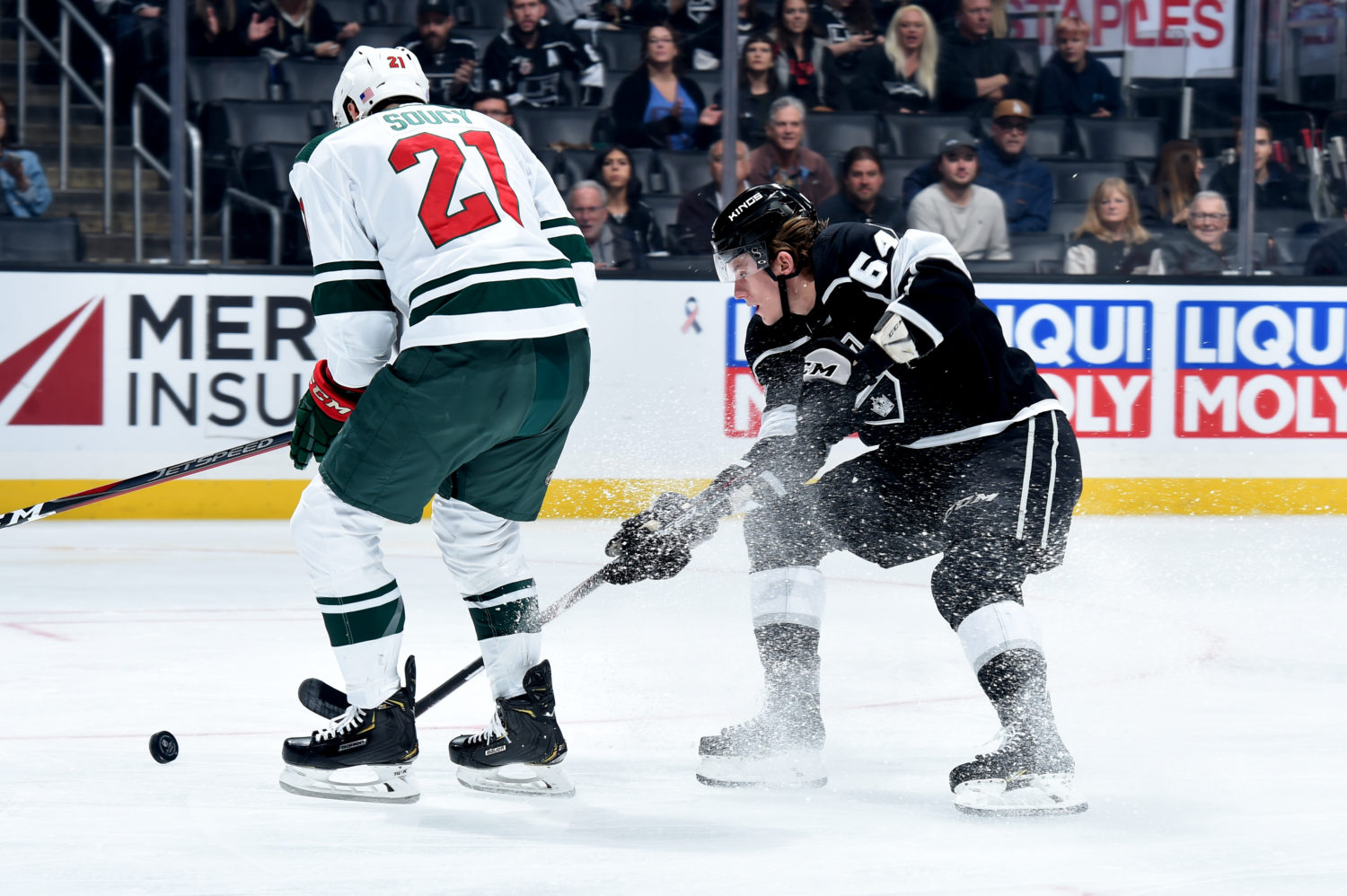