— Torrey Mitchell has retired. Stick taps and happy trails to the recent University of Vermont Hall of Fame inductee who got into 49 games with Los Angeles in John Stevens’ full season as head coach after he was, ahem, acquired at approximately 3:00 p.m. on Thanksgiving Day. May you never have to spend another day of purgatory in Detroit, Torrey.

We didn’t know Torrey for too long, but he was a good teammate, intelligent, and someone who gave off the impression that he’d continue to find success when his playing days ended. And that next chapter now includes ELEV802, a custom performance skating and work-out center near where he resides in South Burlington, Vermont, per Matt Cudzinowski of the Canadiens’ website. Mitchell last played in Switzerland’s NLA, where he experienced a concussion midway through the season and did not return to game action. He ends his NHL having amassed 67 goals and 152 points in 666 NHL games with the Sharks, Wild, Sabres, Habs and Kings.

— Getting close to game time, and I’ll have more to share on Drew Doughty later this week, but first, some quotes from him and Jake Muzzin. You may have already seen these on Instagram or in this morning’s Quick Hits, but here they are, in transcript form.

Lots of Muzzin stuff was covered yesterday. He is a senior member of this Toronto team and an emotional catalyst. He’s also due for unrestricted free agency and an opportunity to cash in on his second major NHL pay day. For players like him and Alec Martinez to endure Darryl Sutter’s undressing, emotional stimulus and reconstruction, those are some hard-earned dollars.

Drew Doughty, on what he misses about Jake Muzzin:
I just miss hanging out with him. He’s a great guy. Known him basically since I was like nine years old, so we go way back. But I just miss hanging out with him, golfing with him, beating him in golf. I miss his family and obviously miss him in the room and on the ice and everything. He was my partner for a few years and we had great chemistry and stuff like that, but it’ll be fun to play against him tonight.

Doughty, on whether he’ll “chirp” Muzzin during the game:
No, we’ll chirp each other, I’m sure. No doubt about that. Obviously, if he’s going to try to rush the puck, I’m going to try to stand him up, and if I go the other way, he’s going to do the same thing. Like everyone says in the league, no matter what, even your friends off the ice, when you get on the ice, it’s all business and trying to win. We’re going to do exactly that.

Doughty, on whether he can get under Muzzin’s skin in golf:
Oh, I can get under his skin. I don’t know about hockey. Yeah, we played against each other a while, but in golf, it’s too easy.

Doughty, on Toronto’s offensive talent:
For one, I guess keep them off the power play. Their power play is really good. But they’ve got a lot of good offensive guys. We’ve got to make ‘em play in their own zone, be good on the forecheck. We’ve got to play our game and not play their game. So, yeah, just be ready for it, play good, solid defense from all six guys on the ice, and try to contain them that way.

Doughty, on Auston Matthews:
Just his strengths. He’s so strong and obviously so skilled. Those are the toughest guys, I think, to play against in the league – guys that are really good in front of the net but can shoot the puck and can dangle and do all those types of things. So he brings a lot of tough aspects. 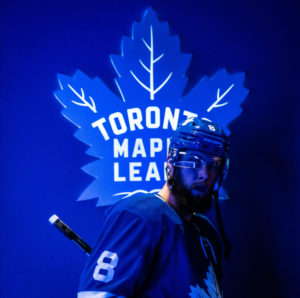 Jake Muzzin, on facing the Kings:
I try not to think about it, but it’s tough. You see the lineup on the board and then you see all the guys that you played with for a long time, so it’ll be fun tonight. I don’t know – I’ve never done it. So, it’ll be interesting to see what I feel out there. I’m kind of curious to see what’s going to happen.

Muzzin, on his takeaways from the Los Angeles organization:
Well, I was fortunate to win one there in LA and be a part of a lot of good hockey teams. A lot of lessons on the ice and away from the rink, and we had a good veteran group, so you learn a lot as a young guy coming up in that atmosphere. I just try to help the guys here where I can. A lot of the guys have done a pretty good job at looking after themselves, but when it comes down to it, just trying to help win those tough games and get ourselves into the playoffs.

Muzzin, on what he learned being around Drew Doughty:
Well, there’s a lot of things. [laughs] No, a lot of good things. His attitude towards playing, he’s a competitor every night, he wants to win every night. He’s emotional – good and bad – but it helps to play with emotion. I think it brings the best out in players and in people. But he also likes to have fun, and he learned that. As a young guy coming up, I was obviously nervous, but to watch him go about having fun on the ice and enjoying it, it helped mea lot when I was younger. Lots of good stuff I’ve learned from Dewey over the years, yeah.

Muzzin, on how long it took him to get comfortable:
In Toronto? I’m still working on it. [gestures to media] This is crazy. Comfortable with the group. We have a great group here, and they made it pretty seamless. The organization, and the way they looked after us and my wife and everything like that, it didn’t take long to feel at home, no. And I’m close to home as well, so that helps.

Muzzin, on being a veteran player on Toronto:
It’s been different this year. Throughout most of the summer I was the oldest guy on the team, so it was like, ‘holy crap, what’s going on here?’ It’s good. These young guys, they keep fun in the game. They bring energy to the rink every day, and that’s important – the season is a long, grueling task. Like I said, I try to help where I can and with the experiences I’ve had over the years, but they’ve helped me, too. They’ve brought new life into me and my career.

Muzzin, on what was clicking when he and Drew were defensive partners:
We were responsible defensively, and we kind of just had fun out there. We had little conversations here and there, but we’d just enjoyed playing with each other, reading off each other and having a good time. I was fortunate enough to get paired with him [younger] in my career, and just kind of fed off of it, so it was lucky for me.

Muzzin, on Doughty saying he can get too energized to shut down stars, and whether that happens:
I guess it is possible, because he told you he did it. Like just for myself, when I look at another lineup and key guys on the team, you obviously are aware of them and what they’ve been doing lately – have they been hot or have they been cold, what’s given them success. I look at Kopitar and top guys on their team. Maybe he just got too psyched up, but that’s Drew taking it personally and playing with that emotion and having that desire to shut down a guy like that. It’s a tough task – I mean, Matts is no easy guy to shut down.

Muzzin, on what has and hasn’t been working for the Maple Leafs this season:
I think we’ve had really good spurts and then some periods where we have to do a better job of preparation in the room, and I think that comes from leadership, so that’s on me, and I have to do a better job of that. But good things – like I said, we’ve had some really good periods where we’re doing everything right and then we just step away for a little bit. So consistency throughout the period and throughout the game I think is big for us right now. 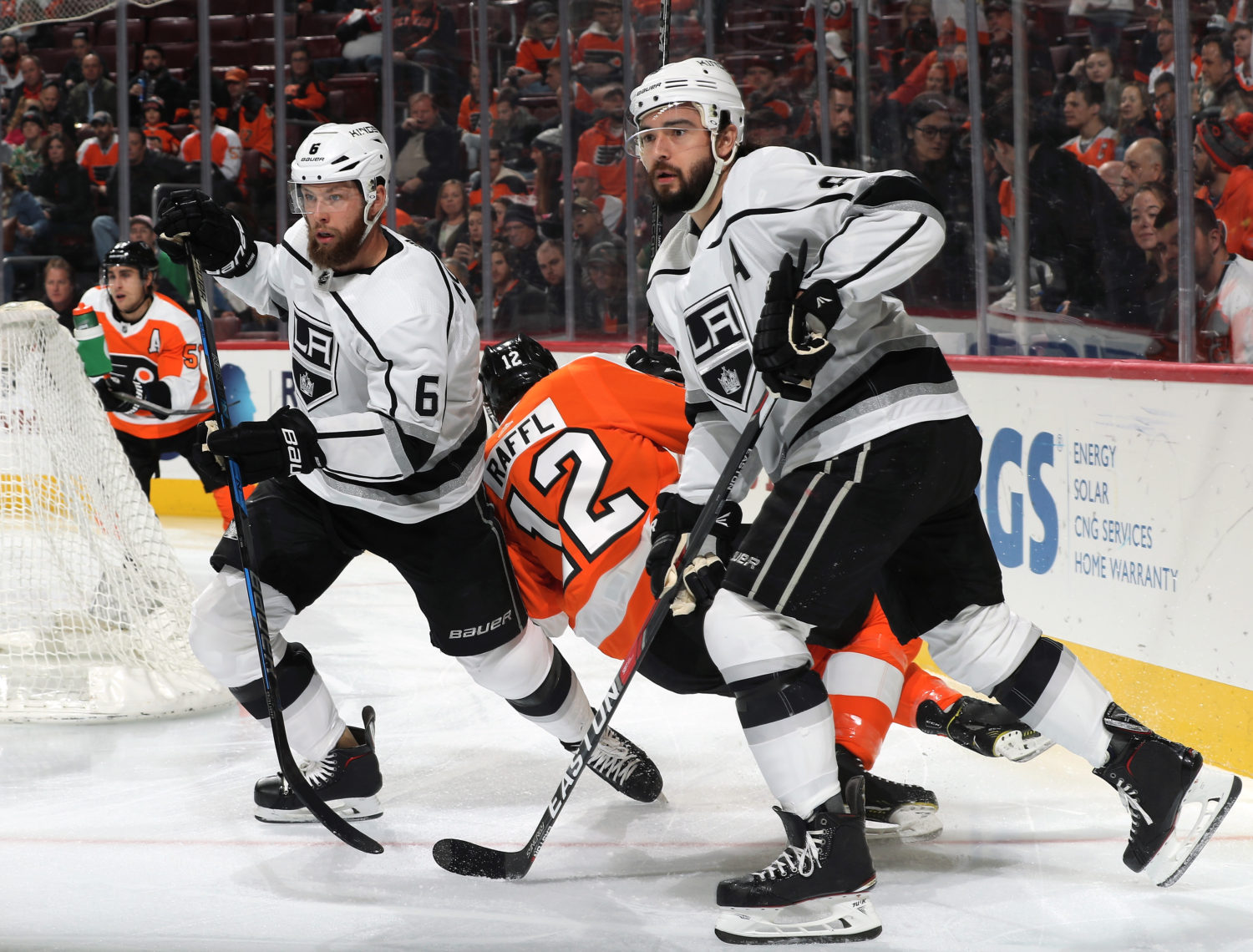