The LA Kings faltered in important moments and fell to 3-6-4 in their last 13 visits to St. Paul with a 5-1 road loss to a Minnesota team that out-shot them 14-7 in a third period that opened with a one-goal margin. You can argue that this game was lost on the power play. With the score tied at one, Alex Stalock made a good save on Jeff Carter’s net-driving redirection and then benefited from Carter and Drew Doughty missing the net on prime opportunities with the man advantage and an opportunity to take the lead. The Wild killed off the overlapping Kings power plays amidst the visitors’ consistent second period push and then benefited from an oddly bouncing puck that deflected off Austin Wagner’s stick, an ill-timed line change with the puck heading towards their own end, and Jason Zucker winning a boards battle against Alec Martinez to chip it forward to Eric Staal on a two-on-one. It was a strange sequence to set up that goal, one in which you could maybe give Los Angeles the benefit of the doubt because it did appear as though the puck would be slung back towards the offensive zone. (It looked a touch like Game 1 in Newark – though with much better ice – when a pinballing puck was played by Justin Williams from the boards to Anze Kopitar.) But, no mind – the Kings had controlled the final 10 minutes of the first period and tightened their grip during most of the second. That evaporated when Minnesota scored on the first shift of the third period, a “strange” goal, Todd McLellan said, and holy schnykies, watching the replay, I’m not sure if many people on the ice knew where the puck was after the rim-around. Toffoli didn’t; he was looking towards the net when Matt Dumba picked it up at the right point. Doughty, Carter and Blake Lizotte were all turned in that same direction towards the corner, allowing Dumba to stride in and shoot on Quick before Joel Eriksson Ek made a good netfront play to bang the rebound free from between Quick’s pads. 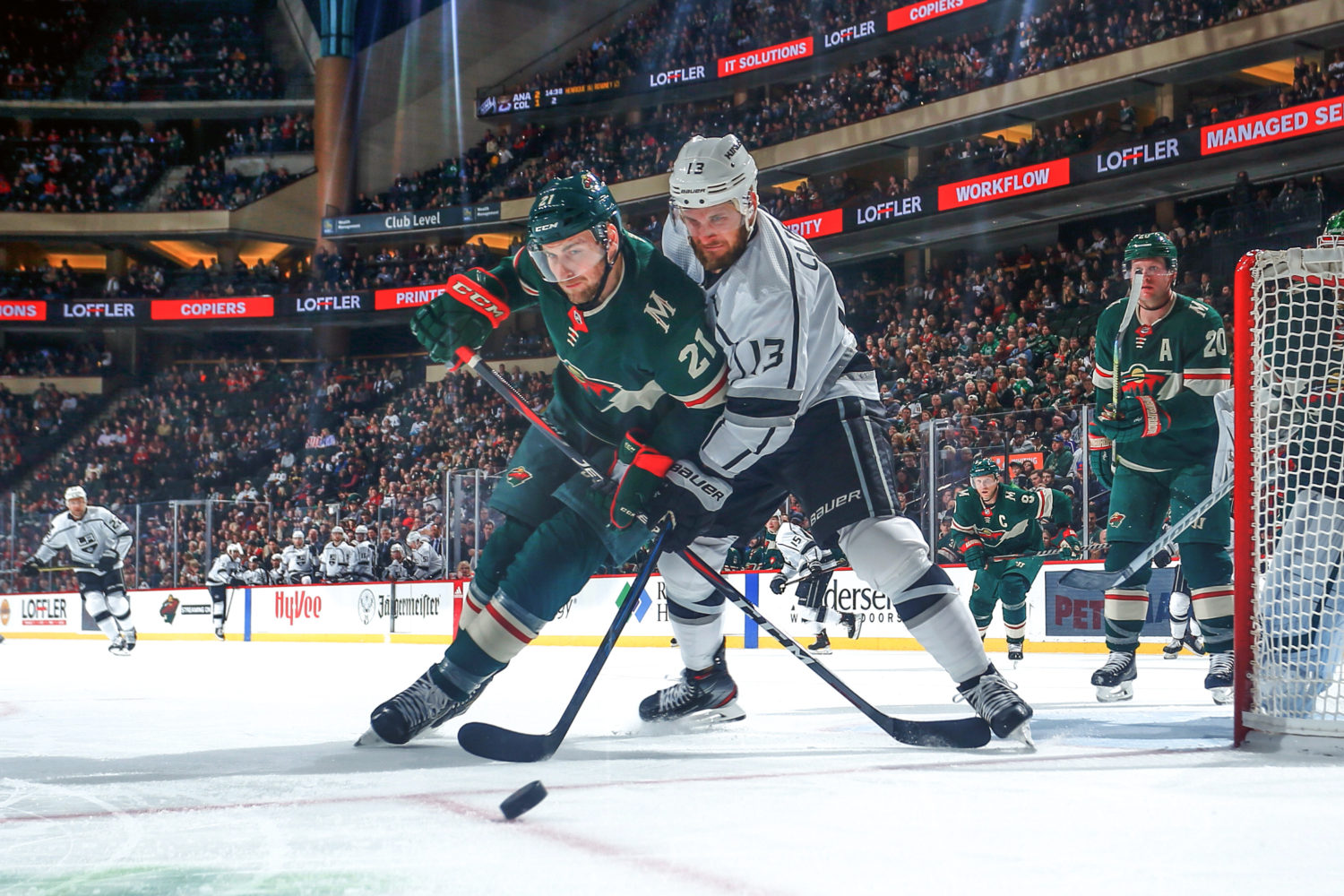 Quick couldn’t be faulted for all of the goals, but he had a rough night, and in a results-based league, the Kings rank dead last in save percentage and scoring chance save percentage, and second to last in high-danger save percentage (all 5×5; via Natural Stat Trick). Minnesota scored on their third shot; against the run of play in the second period; and on their 15th and 19th shots of the game. At the other end, Alex Stalock, only a year and a half younger than Quick and never an NHL starter, made saves on Carter and Ilya Kovalchuk’s high-grade opportunities as the game still hung in the balance. That’s a bit of apple picking to suit a particular narrative, but Stalock was the second star in a game in which the Kings assumed control of the run of play before Staal’s goal. Trading Jake Muzzin, while a coup for the team’s futures, has affected their goals-against. Los Angeles responded well coming out of last year’s bye week, winning three of their first four post-Muzzin games. But from the 5-4 overtime loss in Boston onward, Quick is 7-15-4 with a 4.17 goals-against average and an .859 save percentage. There are 56 NHL goalies who have appeared in at least 10 NHL games over that span, and there is no wider gulf in GAA and Sv% between Laurent Brossoit (3.85 / .877) and Quick, who rank 55th and 56th in both categories. 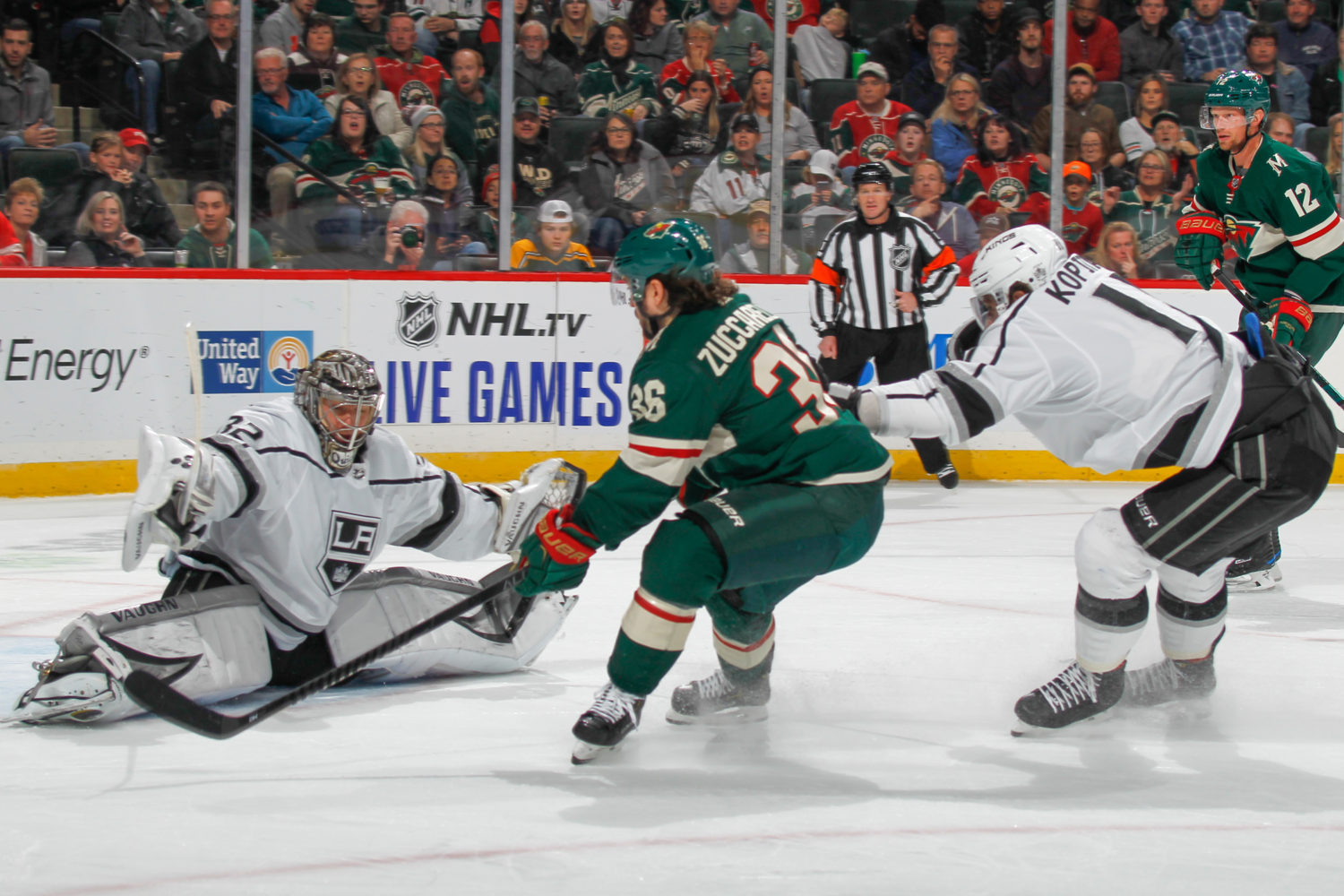 While the “will” didn’t dissipate, the structure did, and the Wild were able to pad their lead as the Kings pushed ahead and abandoned their forecheck. Sometimes that’s understandable when players will make decisions to cheat for offense while trailing by multiple goals in the third period, but for Los Angeles, the process and the belief in the system has to stay resolute. “You could see the mistakes at 3-1, especially at 4-1, started to leak, and we were lucky we didn’t give up five or six,” McLellan said. “We’re not structured well enough, we’re not built well enough yet to get out of what we’re supposed to be doing and roam, and I don’t think that works for any team in the league, quite frankly, especially ours. So, we have to continue to do it right, whether we’re up by four or down by six, and eventually we’ll get better and better at it. But right now, we want to roam a little bit when it’s not going too well, and it just gets worse.” 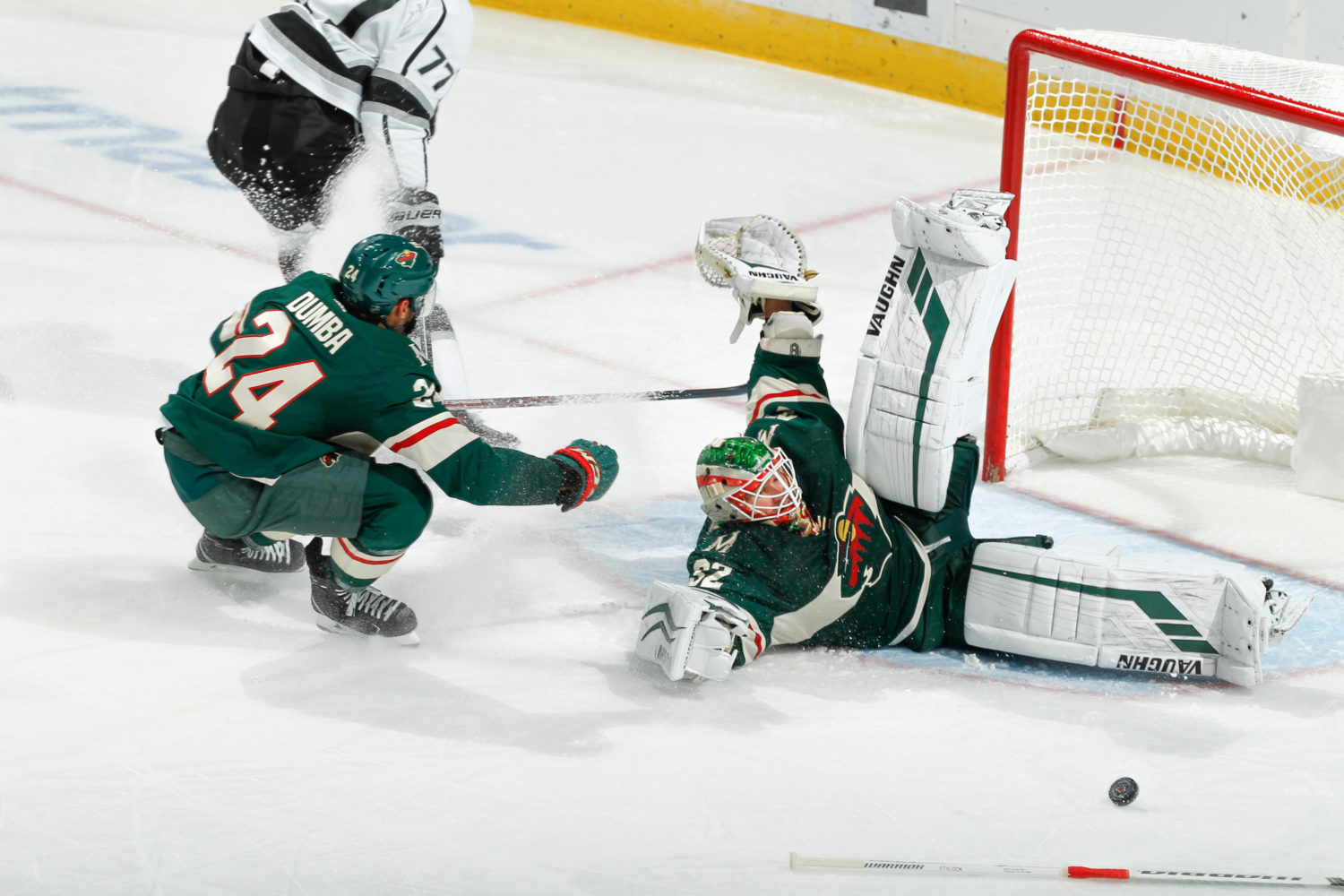 Stick taps and hockey hugs to Jack Jablonski and Jeremy Roenick. Before last night’s game, the Jack Jablonski Bel13ve in Miracles Foundation hosted its 2019 Night to BEL13VE, a fundraiser to support medical research that helps facilitate recovery from spinal cord injuries. Jack has admirably used his recognition and constitution to benefit many who’ve endured their own debilitating trauma and paralysis, a purpose that Roenick has wholeheartedly championed as the two have become close. Jablonski is part of the Kings’ media contingent and will be joining the club’s expanded podcast offerings. He’s done terrific work with Jesse Cohen in post-game wrap-ups, and I’m excited to hear what the young broadcaster will share when his new show is finalized. Click here to donate and learn more about the Jack Jablonski Bel13ve in Miracles Foundation.