There’s no right way to get to the National Hockey League. Some players go the major junior route, others the NCAA route. (Some bloggers do both.) Some, almost universally Europeans, play across the Atlantic Ocean. Most players that ascend to the NHL are drafted, a good number are not.

Jonathan Quick decided to play NCAA hockey. He spent two years at UMass-Amherst and the following year appeared in games at all three level within the LA Kings’ system. For him, the transition to college was eased by his three years at Avon Old Farms, a boarding school that supplies talent to all levels of college hockey, primarily programs in the northeast. That there was a regular pipeline from his home state of Connecticut to NCAA programs influenced his decision to play college hockey, as did the lack of familiarity with the major junior model.

Matt Roy traveled to Houghton, Michigan from greater Detroit to play for the Michigan Tech Huskies, though there wasn’t as much of a culture shock arriving in the Upper Peninsula as there was in the years that followed. “I think it was bigger coming from the U.P. to L.A., because it’s probably the polar opposite of Los Angeles.”

No two NCAA D-I programs are the same. There’s the small-town feel that Roy enjoyed, whereas there are those who play for schools in the Twin Cities, in Boston, in Tempe, Arizona. There are the elite academic rigors of Princeton and the professional golf management degree awarded by Ferris State. And that may sound as if it’s a knock on the Bulldogs, but it isn’t – it’s to illustrate the diversity of thought available to those who admirably choose to become student-athletes and that for each prospective D-I hockey player, there’s a school whose curriculum is tailored to their interests.

A good number of the rivalries stay fresh. Roy and Sean Walker (Bowling Green) were both aware that their alma maters were meeting this weekend, as were those of Blake Lizotte (St. Cloud) and broadcaster Alex Faust (Northeastern). That’s perhaps the best part of college hockey. The pageantry and traditions are palpable in a number of tremendous old rinks, such as Michigan’s Yost Ice Arena, Cornell’s Lynah Rink and North Dakota’s Ralph Engelstad Arena.

Speaking with LA Kings Insider, Quick and Roy spoke about their decisions to play for UMass and Michigan Tech, their curriculum, and how the hockey community supported them while away from home. 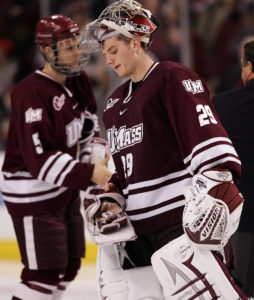 LA Kings Insider: When you were being recruited, when did you have your eyes on UMass, and at what point in high school did that recruitment really begin?
Jonathan Quick: It was junior year. I talked a few schools, went on a couple visits. I liked a couple other schools. Obviously, out east, there’s a lot of great schools, good hockey programs. At that age, you’re just kind of excited about the process. Fortunately enough, they offered me a scholarship and I was happy to accept.

LAKI: There’s no right way to get to the National Hockey League. Some go through college, some go major junior, some come from European leagues and youth programs. But why was the NCAA route important for you?
JQ: Just growing up out east, for the most part, that’s what you think the path is, right? You see older guys from a similar area and what they do – high school and then go to college, and hopefully it pans out afterwards. But you just feel like that’s the route. Not too many guys know the junior route or the North American league or anything like that. You see a handful of guys try it, but just for the most part, percentage wise, I think most guys go college, so you just kind of feel like that’s the play.

LAKI: That first year of college can be difficult. You’re away from home, you have to balance life and studies and all that type of stuff. As a student-athlete, how did you find a rhythm, and how did you build that balance into your life that first year, even with boarding school?
JQ: Well, I think it helped that I did prep school for a couple years in high school, so I had that experience of being away from home. You’re kind of on your own. Obviously there’s a little more structure than high school, but you’re growing up a bit and being more responsible for yourself. You learn that at a younger age and I think that helps a lot going into college, along with the fact that my freshman year I had 10 other freshmen with me. We were a close group, we took a lot of classes together, we were in the same room, the same dorms. We all roomed with another freshman, so that helped a lot having those relationships, for sure.

LAKI: Amherst is a great college town, and when you go there, you also had the options to take classes at the other schools within the Five College Consortium. Were you taking classes only at UMass, or did you take any other classes at Amherst, Smith or Hampshire?
JQ: No, I don’t know if I would’ve qualified for the Amherst classes. I was only there two years, so at that point you’re taking most of your gen-eds in classrooms with 200 other students, those big auditorium classes. It was after your sophomore year you pick your major and then that’s when you start working into those types of classes, and I didn’t make it that far.

LAKI: I looked at Hampshire for a couple minutes and just remember how awesome of a college town and area it was. What was it that stood out about your time in Amherst, away from the rink?
JQ: Yeah, it’s a lot of fun. It’s a big school, so there’s always something to do. It can be an advantage, and maybe sometimes a disadvantage when you start burning the candle at both ends a little bit. Like I said earlier with the other freshmen and the class we had, you’re doing something with one of those guys every day, whether you’re going out to dinner, you’re going around campus, whatever you’re doing. But it was a lot of fun.

LAKI: A lot of the college structure relies on the two-games-a-week schedule. You’re practicing and you’re in the weight room. How did that schedule and regimen prepare you for the rigors of an NHL career?
JQ: I think that’s the one thing that doesn’t prepare you as much as if you go the junior route because it’s so different from professional hockey. I understand with classes, you can’t miss too much school, so they have to stick with the Friday-Saturday scheduled games. But I remember my first year of pro, that transition from playing two games a week to maybe playing four games a week with the travel and everything like that, that’s a big adjustment. At the same time, just playing with older guys, you’ve got 24-year-olds that are seniors, 25-year-olds that are seniors, so they’re grown men. So, playing with them, the physicality of the college game I think is pretty high, so that helped prepare you in that way.

LAKI: UMass came on strong again last year. Do you stay close with administrators or with the program? Like, did you ever send a note to someone like Cale Makar?
JQ: I spoke with their coach a bit last year, and they had a goalie who set a new record for wins in a season, so I shot him a text congratulating him. It’s really fun to watch the Frozen Four last year and see how well they did. That was exciting, it was an exciting time for UMass hockey and for the alums, as well. 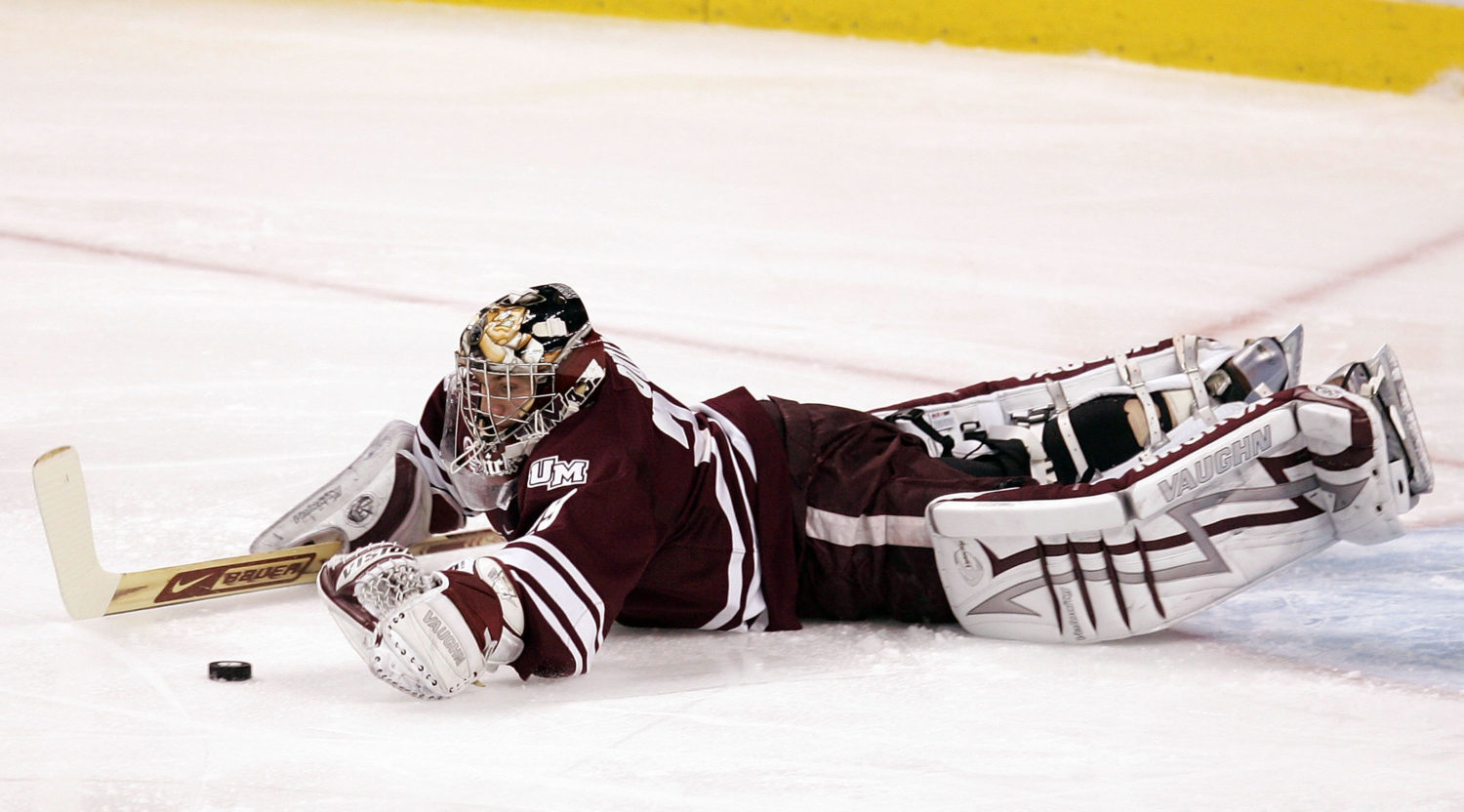 Bonus Audio: Matt Roy on NCAA Hockey
-because of an incoming call, a question towards the end of the Roy interview was cut off. It was about playing in the Great Lakes Invitational at Joe Louis Arena. 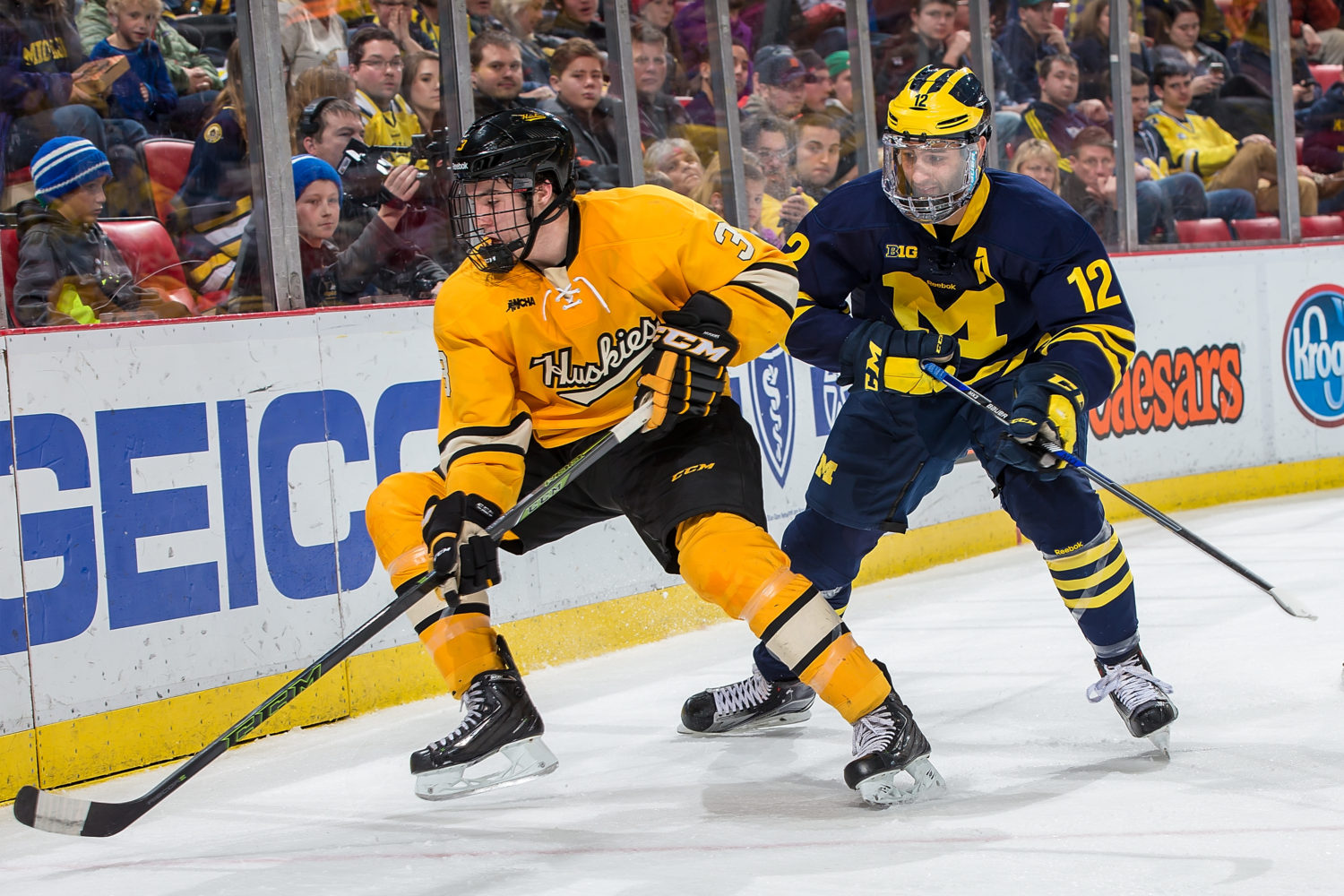