Lots of stuff to go over, Insiders, some of it important, some of it trivial, some of it [road apples]. The LA Kings took the TSPC ice shortly before 11:00 a.m. and showed the following alignment up front:

— More on today’s roster moves. First, Tobias Bjornfot ain’t going back to Sweden, as was the plan at the start of training camp. He was assigned to AHL-Ontario this morning and will be expected to spend most of the rest of the season there, where he’ll be able to get in ample work in a variety of situations and “just feel good about himself,” according to Todd McLellan.

“He’s been in this environment, he’s been in this arena, where they practice. He knows where he’s living now, he knows who his teammates are, and we have no problem or hesitation to call him up.”

Any hypothetical call-up as of today is hazy, though expect to see him to get a small handful of games in Los Angeles the rest of the way, most of which should be expected to come in the second half. He just can’t play more than nine games with the Kings – he’s at three now – or else the first year of his entry-level contract will kick in. That’s not in the team’s best interests. By signing as an 18-year-old, he’s actually eligible for a two-year entry-level slide, provided he doesn’t play more than nine games in either 2019-20 or 2020-21.

“We feel that he can develop here,” McLellan said. “He’s excited being here, whether it’s with our club or with the Reign, and I think he’s adapted really well. He’s a fun kid to be around. He just enjoys the game, took a smile on his face, and that didn’t change yesterday when he heard the news. It was actually ongoing for a little while, and he’s handled it well.”

Hockey ops said earlier today that the “plan is to keep him over here for an extended period of time,” and that should be interpreted as the full year. Barring an improbable swath of defensive injuries or unforeseen circumstances that could necessitate a recall, the expectation as of today is that he’ll be released to participate in world juniors this December.

Drew Doughty said that his advice to Bjornfot was to “just stick with it.”

“You’re a young guy, you’ve got a bright future in this league. When you’re not playing, there’s no point in being up in the NHL just sitting in the stands watching, so it’s good for him to go down in the A, get some playing time, get his confidence back up, and he’ll be back here eventually,” he said.

As for Carl Grundstrom, he’s an NHL player, as McLellan branded him. His move was to get him playing games when there might not have been an opportunity this weekend or in the near future for that to happen with the parent club. “He just needs to get a few reps and get a little bit of confidence there,” McLellan said. “He’s more a game player than a practice player, and he’ll get in some games there and then he’ll be back.”

— There was an earthquake last night! “3-0 earthquake, yeah,” offered McLellan, who didn’t feel the temblor but “was awoken to some car alarms and stuff like that.”

He’s a repatriated Californian whose family experienced similar jolts in the past, so last night’s quake was “nothing out of the norm.”

There wasn’t anything shaky about his message at practice Friday morning.

“The message was two-fold: The defensive side giving up freebies, especially early in the game and repetitive mistakes, so we tried to address that and repair a fix. And the other side of the coin was the opportunities we created – why did we create them and why didn’t they go in? So, a little bit of that. But it was more a maintenance day for our team. Keep our legs moving and get ready for a tough battle tomorrow.”

More about the impending battle to come. What about those chances – was a thesis built towards the team’s lack of finishing on Thursday?

“It’s having the poise to hold onto it a little longer, to read the play and shoot it a little bit quicker, to elevate the puck when you need it. Sometimes space is necessary in and around the crease,” McLellan said. “We tend to be chasing pucks away from the net because we’re so tight. Getting the shot off from the point maybe a little bit quicker, or maybe a little bit later. Letting people get there. There’s a lot of factors that go into it. If we could move the posts over by a half-inch, we’d be fine too, but we don’t get to do those things.”

— Doughty-Tkachuk, which is nearing Jaws 19 territory in its catalogue of chapters, episodes and sequels (the latest of which served as a compelling remake), will be reprised Saturday. “To be honest, I’m just sick of it,” Doughty said. “I mean, it is, I guess, good for the game in a way because other sports , but we don’t. But, yeah, I’m just kind of getting sick of it.”

It’s hard to blame him. The personal rivalry doesn’t register beyond engaged hockey fans in the United States, but in Canada, where hockey forms part of the national identity, the spat is national sports news. Kings fans aren’t fond of Tkachuk and fiercely supported Doughty after his emotive outburst in the penalty box during a heated encounter at Staples Center near the start of the 2017-18 season, “but they aren’t chirping him on Twitter like I’m getting chirped all the time and stuff like that, so it’s a little different,” he said, adding that he dug into his game-winning celebration at Scotiabank Saddledome last week “because my home country fans were booing me the entire game.”

But it’s not what I’d planned on asking Doughty about. His game’s a bit off, and it’s not always apparent, shift-after-shift. He’s got three goals and five points in seven games, but where his game’s at at the start of the 2019-20 season is not at the same perch as it was under Darryl Sutter or during John Stevens’ first year.

Some of that’s understandable, as written in today’s Waking up with the Kings. On the personal side, he’s a new father, he’s approaching 30. On the ice, he’s working with his third defensive partner since the start of camp amidst a much more aggressive system. He’s still making adjustments, some of which may require an extra beat of thinking and aren’t as much in line with the renowned reading, reacting and escaping that have formed a core part of one of the NHL’s most diverse and high-end defensive skill sets.

“I’m just in a different spot in the neutral zone and stuff and I’m not able to get up in the rush as much as I feel like, and I’m trying to find ways to do that,” he said. “I think I’m more worried this year, more than anything, just worried about getting scored on. It’s always in my head because I was in the top minuses for last year, and I think that kind of messed with my head, so that’s all I’m really focused on this year, which is really a bad thing, but I think my defensive game has been really good.”

There’s always been the colloquialism that he still does a number of things to help his team win even when he’s not on his game, and his eminent braggadocio supported that premise. “There still hasn’t been a defenseman better than me on the ice in any game, and that’s just a fact,” he said.

But he’s a -13.1% CF%Rel on the (early) season, even though he was well in the black on Thursday. And, as I’ve shared on this site and on television, disregard Doughty’s evaluations of himself and others at your peril.

“I think I played really well last night – really, really well,” he said. “I liked my game in Calgary, didn’t like my game in Vancouver. I mean, I didn’t like a few of my games. I feel like I haven’t been able to control the game as much as I used to in the past, but last night I thought I was pretty dominant.”

— Nikolai Prokhorkin, recalled from AHL-Ontario earlier in the day, skated through practice as an extra, and whether he’ll make his NHL debut against Calgary should be learned as Saturday’s morning skate elapses. He’s not fully fluent in English, though as someone who has played in North America and has a history with the organization, he’s able to hold his own.

Prokhorkin learned English in school, through music and his earlier time in Manchester, as well as from ex-Kings bench boss John Torchetti, who coached him at CSKA-Moscow. It also helps that Mario Kempe speaks a “little bit” of Russian. “When I practice in Ontario, it’s Mario Kempe helping me. He played in Russia,” he said.

But given Prokhorkin’s age (he’s 26) and the universal hockey language, he’s not exactly a stranger in a strange land. He certainly understood the message when Ontario GM Rich Seeley informed him he’d be changing locker rooms.

“He has experienced life in this building around teammates,” McLellan said. “He knows management, he knows the area, he was in the minors, so it’s not brand new to him. He’s old enough now and spent enough time here that he can communicate quite well. The slang that we sometimes use, the pace at which we talk or explain drills can leave him behind, but we have coaches that sit with him individually and explain things, show him visually. In my mind, that’s a language. Vision is a language, and everybody sees it usually the same. If it was somebody else that was coming over clean from Russia or somewhere where they couldn’t speak English, weren’t accustomed to North American tradition or antyihng like that, didn’t have the life skills necessary to survive and be healthy, we would provide all of that for them. We would make sure they had proper English tutors and live with perhaps a billet, meals, all that type of stuff. And we’re not the only team. Every team in the league does that.” 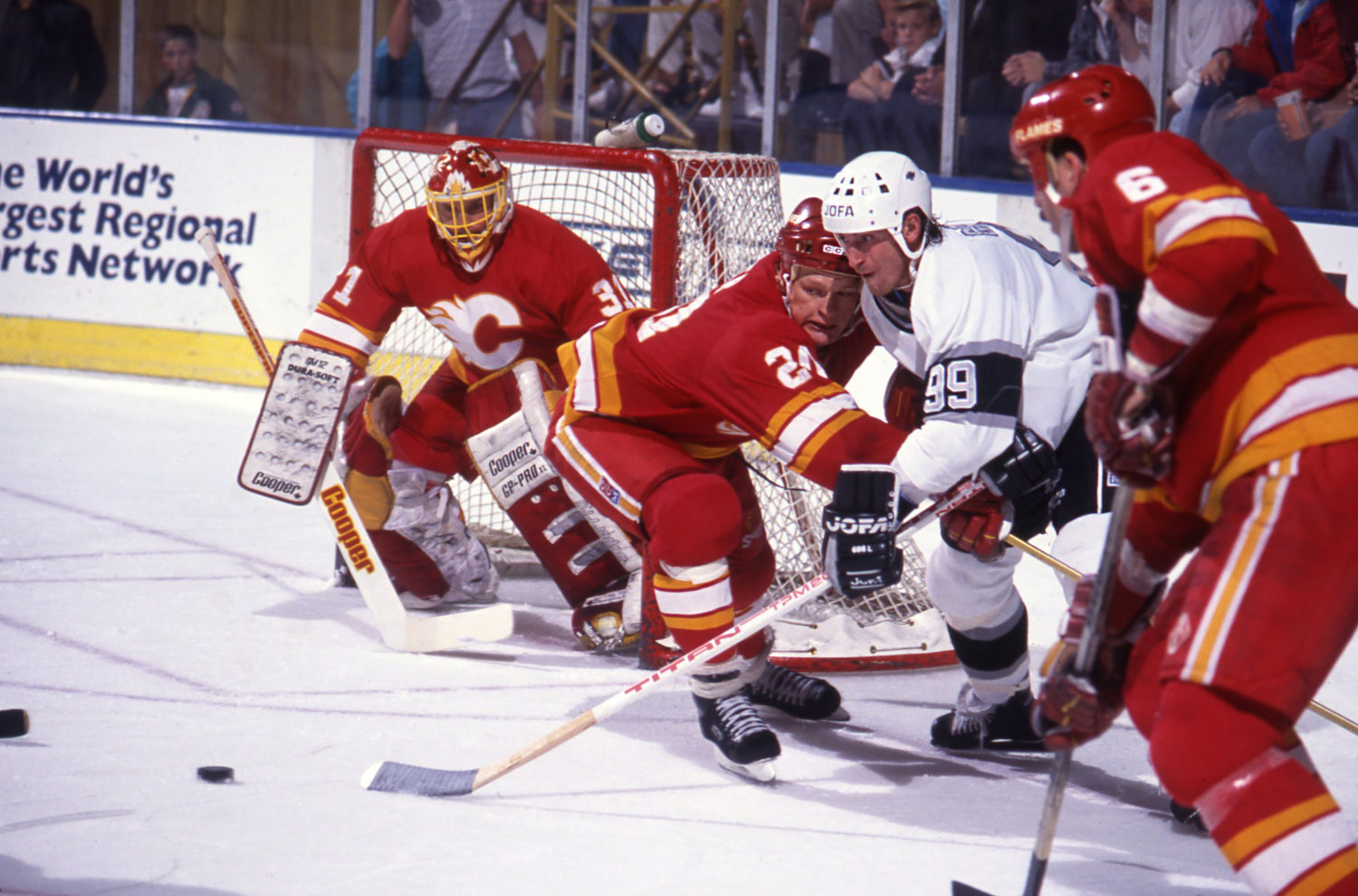