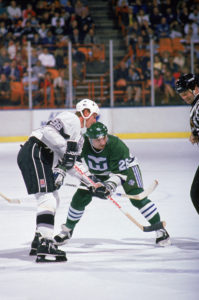 INSIDERS. A fine Tuesday afternoon to you. For tonight’s projected lineup – no changes up front; Soup – click here. It it’ll be Petr Mrazek in goal for the Canes, via Michael Smith of CarolinaHurricanes.com, who also projected forward groups of Svechnikov-Staal-McGinn, Niederreiter-Aho-Teravainen, Dzingel-Haula-Necas and Foegele-Wallmark-Gibbons and defensive pairings of Slavin-Hamilton, Edmundson-Pesce and Gardiner-Fleury. Role-playing regicide specialist Jordan Martinook [howling] is out with a core injury and Trevor van Riemsdyk with a shoulder injury. Sebastian Aho ::tugs on Superman’s cape:: has one goal and no assists in six games. For a 5-1-0 team.

— Los Angeles didn’t skate on Monday, so Tuesday’s session tended to more detail than a typical morning skate. After an 0-for-3 performance in Sunday’s loss to Vegas, the penalty kill was the focal point this morning. “The team needed a breather, so it didn’t give us time to work on anything yesterday, so we walked through some things today,” Todd McLellan said. “I wouldn’t say we practiced with any type of intensity, but we walked through some concepts and hopefully we can polish that area of the game up.”

Generally McLellan’s shorthanded work involves full-speed intensity and shot-blocking requirements, so this was more about hammering out the positioning and detail – and, importantly, repetitions.

“We’re strugging, obviously. We’re not doing well enough,” Drew Doughty said of the kill. “I think just our tendencies from what we used to do in the past, we started going back to that by accident, because it’s just what we’re used to doing. So, we just figured out something there with the rotation up front, and then obviously it just comes down to blocking shots. We’re poor in the faceoff dot right now, and that’s not all on the centermen, that’s on everyone – and, getting clears, it’s another thing.”

It was nearly verbatim to the diagnosis McLellan gave of the penalty kill, which is 9-of-16 on the season and only 3-of-7 at home. There are still regular, ingrained habits that a number of experienced players have to flush out. Right now, or at least on Sunday, it wasn’t a “reactive situation.”

“It’s a ‘think’ situation right now, and you’re automatically slower when you’re not reading and reacting to what’s happening around you and you’ve got to think your way through a scenario. Especially when you’re short an individual, it makes it that much tougher,” McLellan said.

Tied for 23rd in the league at 39.1 percent, the shorthanded faceoff rate has also been poor. But it’s not only the centers failing to win a draw, it’s more of the “faceoff execution rate” that has been a challenge. And though the team had eight days to prepare for the season, they weren’t yet able to pinpoint and attack challenges in special teams using regular season data, thus leading to a roadblock during an early-season scheduling squeeze. “A pair of back-to-backs within four days is usually odd in this league, especially with a travel day off. So, in my mind, we’ve played four games with one practice,” McLellan said. “Tonight will be our fifth, and still with a single practice. Your learning, your teaching, your feel for the game all come through video. They can watch it, but they don’t necessarily feel it or experience it on the ice, so you’re hoping they can adjust without that.”

Carolina’s power play is 5-for-20 on the season. Teuvo Teravainen has stirred the drink with four assists.

— Fun topics! Sean Walker is still the NHL’s top play-driving defenseman. McLellan was asked about him today, and several of his bytes sounded as though they came from opposing coaches in an Athlon college football preview. “Skates just as well with the puck as without,” … “defends fairly well because of his mobility,” … “arguably been one of our top two or three D-man through the first five games.” Some good praise, and pithy. But Walker has impressed his teammates and his coaching staff – nothing new for the two-time Bowling Green captain who admitted that in order to graduate with an economics degree that he’d need to find the appropriate school and hockey balance.

“Honestly, I wasn’t that good at school until I got to college. The coaches there, they don’t let you get away with being bad at school,” he said, smiling.

Specializing in supply chain management as influenced by his father, a distributor for Moulson Coors Canada, he ended up taking some classes that required more immersion than the typical hockey lifestyle affords in Wood County, Ohio.

“Calculus was no fun,” he said. “I did my time in the library, I had a tutor, so I did alright. The one class that was probably the hardest was this computer class, it’s basically Excel. You had to do all these very complicated formulas and set up stuff to find out the probabilities of everything.”

“I try not to look at anything like that,” he said.

Others have been impressed. “Particularly his teammates and his coaching staff,” McLellan said.

— More fun from McLellan, this time on the shifty and powerful ball of energy, Blake Lizotte.

“Trent Yawney says he’s like a mosquito in a dark tent. He’s just a pest. He just keeps on going and going, and I think a lot of the really good teams in the league have an Energizer Bunny, if you will, and that would be Blake in our case.”

The Kings’ coach referenced him as a player that’s dangerous both with the puck and without it and an energy conduit to linemates Tyler Toffoli and Jeff Carter. “They’re smart, they’re good positionally, they give him a little bit off size, so that line, since we’ve put it together, we like it,” he said.

Lizotte has commanded attention at an important position and even during a game with special teams shortcomings and other embedded challenges, the Kings were still able to work and create in five-on-five play, and he continued to trend well – as he nears double-digits in NHL games.

“Getting better each game is important and I’ve felt I’ve done that through the first five games,” he said. “Not just creating chances, which is what I like to do. I’m not always a pure goalscorer, if you look at my statline throughout my career, but if I’m creating chances and getting pucks to the net I feel like I’m doing my job and I feel like I’ve done that well so far.”

Using his mosquito power to buzz past Tomas Nosek and set up Jeff Carter’s high-grade two-on-one bid, he’s shown that he can play with good pace and make plays. But as a National Hockey League center, his minutes won’t grow unless he shows he’s responsible in key situations without the puck.

“As a centerman, trying to play down low, there’s big boys,” Lizotte said. “You have to play a little bit more smart, you can’t just go running in there and try to outmuscle them because at my size, it’s not likely. I’ve had to change my mindset a little bit in the d-zone, play a little more reserved and stay positionally sound as opposed to just outwilling them in the d-zone. I think that’s presented probably the biggest challenge for me so far, is moving bodies down low in the d-zone.”

He’s also mature for a player who turns 22 in two months. Lizotte’s constitution made an impression on McLellan during the preseason, when he shared with the media after a home game against Vegas that he wasn’t at his best despite recording a goal and an assist, winning five-of-seven faceoffs and earning the game’s second star.

“That’s pretty good self-evaluation. He knows himself better than anybody else does, and he’s going to hold himself to that personal standard that he set. That’s the most valuable evaluation tool an individual can have, is you live up to your own standards, and if he continues to do that and pushes himself for that high bar, we’ll be happy. So does that mean he’s ‘ahead of it?’ Perhaps he is maybe because he can just evaluate himself better than some others,” McLellan said.

— Penn State defenseman Cole Hults, tied for second in NCAA hockey with four goals after recording a hat trick in the Nittany Lions’ 8-2 win over Sacred Heart on Friday, was named the Big Ten’s third star of the week. Hults, whose ELC offer will come upon the conclusion of his season, is a safe bet to play in Ontario next season. Click here for earlier coverage on Hults, whose football team I will be rooting against this Saturday. Nothing personal, Cole. 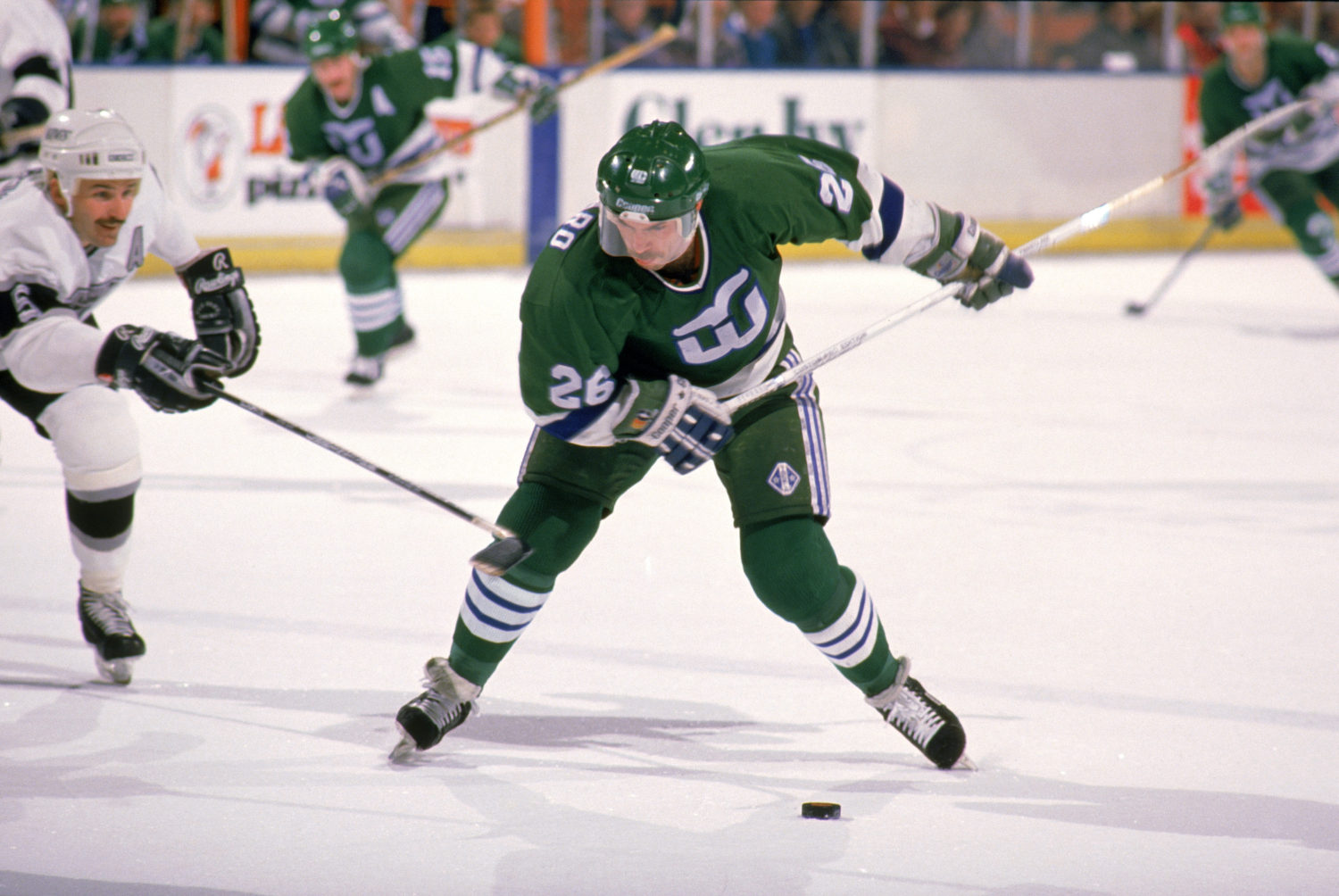