Third Period
20:00 – ONE MORE PERIOD LEFT (probably)
18:20 – 3-on-1. Toffoli-Lizotte give-and-go. Toffoli runs out of space, gets a point-blank shot off. Save, Fleury.
17:03 – PENALTY LAK. Doughty for interference.
16:00 – Smith’s deflection of a Schmidt shot passes just wide of Quick.
15:45 – Press box announcement that Alex Tuch, who left the game in the second period, will not return.
15:36 – PPG VGK. 2-1. Stastny one-timer off an Eakin pass from atop the right circle.
14:22 – GOAL VGK. 2-2. McNabb wrister from distance through some moving parts but not a ton of traffic. Looked like Quick didn’t see it well.
14:01 – PENALTY VGK. Pacioretty for roughing. Two handed shove up high on Doughty to create some space. Can’t do that.
11:35 – Lizotte-to-Wagner, who had net to work with but just couldn’t get a stick on the puck in time for a redirection. Puck freed into the slot towards Clifford, who is taken out of the play with what would be a potential first period penalty.
11:25 – Good Martinez backcheck denies Vegas a rush chance to the slot.
8:59 – GOAL LAK. Kyle Clifford. 3-2. Amadio line vs Karlsson line. Clifford wins a battle behind the net, goes to the low slot, is immovable, buries the rebound of a Walker shot past Fleury.
2:55 – Holden-to-Nosek redirection, just wide. LAKI a fan of Tomas Nosek. Best 4C in the league?
2:47 – PENALTY LAK. Martinez for tripping. Crowd standing and yelling for a preseason game. Fun! Unless it’s a preseason shootout. Not as fun.
1:53 – Roy doesn’t let Pacioretty maneuver around him on a 1-on-1. Good defending. Held his ground.
1:00 – Fleury out, VGK net empty.
0:51 – Time out, VGK.
0:39 – Carter’s helmet comes off. He must either retrieve it or head immediately to the bench.
0:00 – 4-2-1 preseason in the books. Centering pass deflects off Doughty’s skate, and the post, just prior to the buzzer. Kings win.

Second Period
20:00 – Power play. Kings moving from our right to our left this period.
18:30 – Shooting gallery around Fleury; two shots catch Brown. One in his leg or knee, one in his foot.
18:00 – Reilly Smith odd-angle shot. Not a ton of space to shoot at, courtesy Quick.
16:03 – Big Carrier (remember him?) hit on Hutton.
14:36 – Doughty a touch flat-footed as Tuch remains balanced and gains a step on him to the outside. Doughty attempts a diving poke check, which affects Tuch enough to force him towards an area where he runs out of angle.
14:22 – Toffoli-to-Wagner redirect; Fleury save. High-grade chance.
13:36 – PENALTY VGK. Holden for interference.
12:15 – Karlsson gets his stick on Martinez’s outlet, intercepting it. He spins and issues a pinpont pass to Smith, who misses wide.
11:36 – Another VGK chance. Nosek intercepts a Kovalchuk pass, but the puck rolls off the end of his stick as he attempts to lift a backhand. A few too many chances against while on the power play.
11:23 – PENALTY LAK. Walker for holding.
6:34 – Eakin denied from close quarters in front of the net. Quick comes out to challenge and gets a piece of his shot with his shoulder. Knights pressing.
5:58 – PENALTY LAK. Hutton for delay of game. Getting ready for the first week of the season with a heavy amount of special teams tonight. Only nine Austin Wagner shifts through the first 34:02 of game action.
5:20 – The umbrella shrinks as pressure increases, but Quick fends off a sharp Marchessault wrister with his shoulder.
3:00 – L.A.’s only shot in the last 12 minutes came from 146 feet out, per the official play-by-play log.
0:40 – Lewis crashes the net and bats a Fleury rebound into an open net with his glove. No goal, clear as day. Immediately waved off. Play on.
0:00 – Let’s take stock, shall we?

2-0 #LAKings after two. Quick excellent. Special teams-heavy, but LAK lost their way in the second period after a structurally sound first. Out-shot 19-1 over a 12:25 stretch in which their lone shot on goal was credited from a distance of 146 feet.

First Period
20:00 – The Golden Knights hype guy says that Chance is the “best mascot in all of sports.” You, sir, are no impartial observer!
19:10 – Good retrieval by Brown at the end of his shift leads to dangerous zone time. Kopitar’s backhand from the slot was denied before the puck hopped over Martinez’s stick on a golden rebound.
18:25 – Pacioretty doesn’t get a ton on a high-grade chance from the slot. Right pad save, Quick.
16:37 – Carter takes a faceoff on his off-side even though Kempe is on the ice. Knights with the draw, but Kempe’s stick swat forced the puck deeper into the offensive zone.
15:45 – Lizotte was caught in McNabb’s office, which has apparently widened into the neutral zone. Heavy hit.
15:37 – PENALTY LAK. Wagner for hooking.
13:37 – Dicey kill, but several important Hutton clears. Wagner exits from the box but is unable to catch up to a clearing attempt. Kopitar retrieved the puck and nearly issued it to a wide-open Wagner, but the pass was too far ahead of the winger’s stick.
10:32 – GOAL LAK. 1-0. Amadio beats Merrill and Pacioretty up-ice and while in-stride redirects a diagonal, cross-zone pass from Lewis past a vulnerable Fleury.
8:39 – PENALTY VGK. Eakin for hooking.
8:12 – POWER PLAY GOAL LAK. Iafallo chips a bouncing rebound past Fleury after Kopitar wins a faceoff to Doughty, whose wristshot forced the rebound.
4:23 – PENALTY VGK. Holden for interference.
2:49 – Kopitar blocks Merrill’s odd-angle chance down low.
1:13 – Stastny and Pacioretty get sticks on a bouncing puck around the Kings crease. Good second-opportunity looks, but no dice.
0:03 – PENALTY VGK. Marchessault for slashing Bjornfot.
0:00 – Period over. 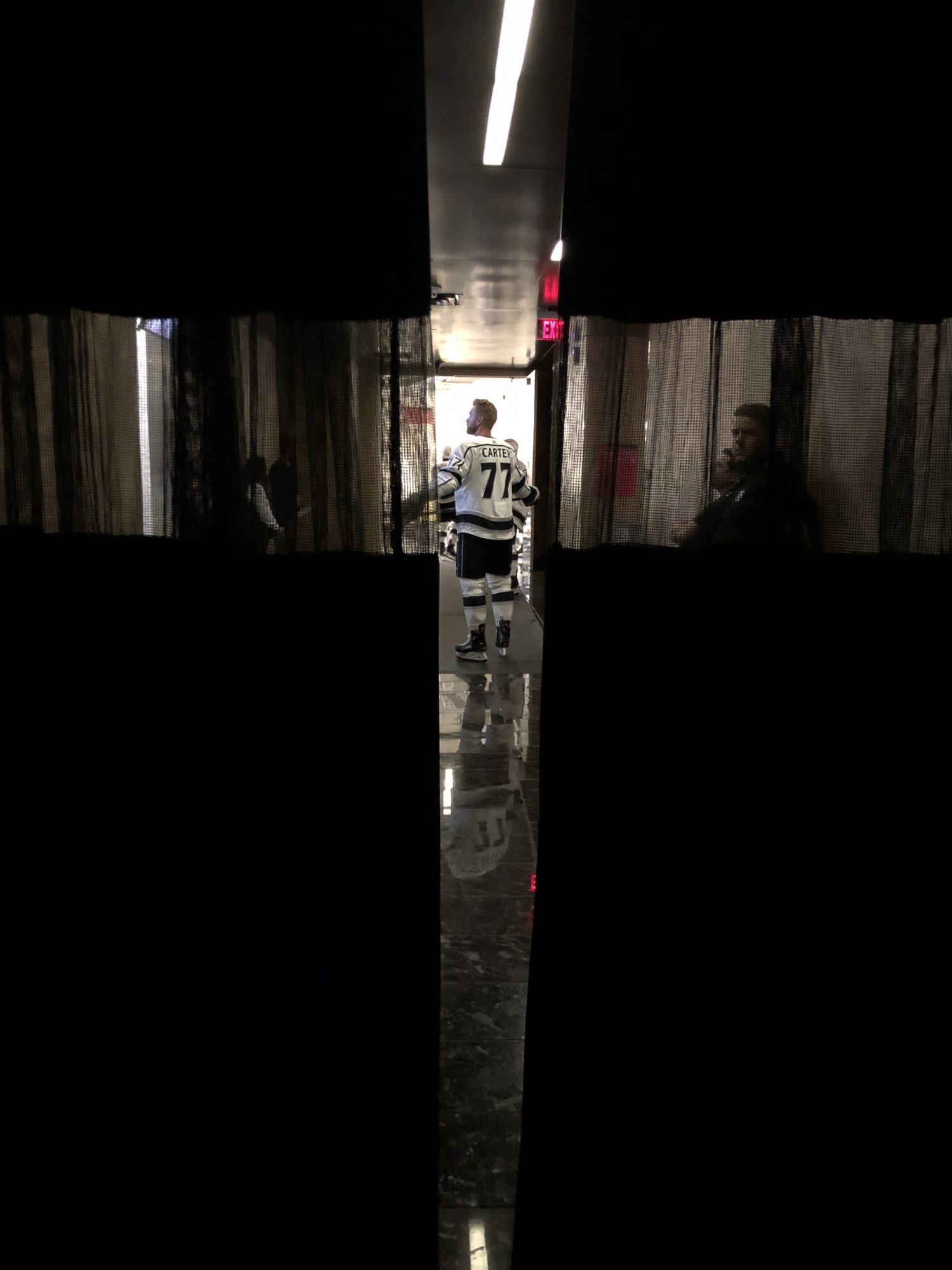 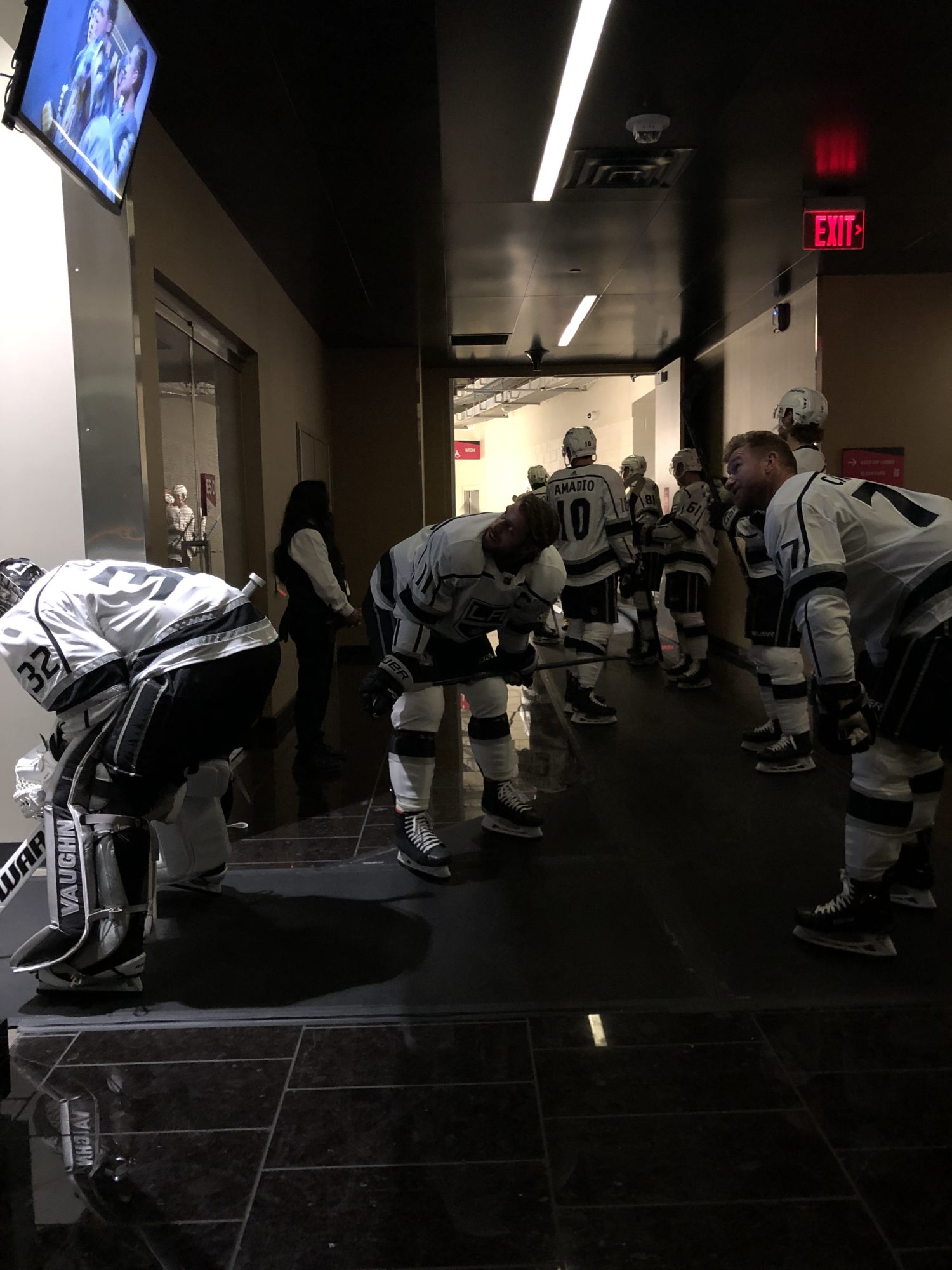 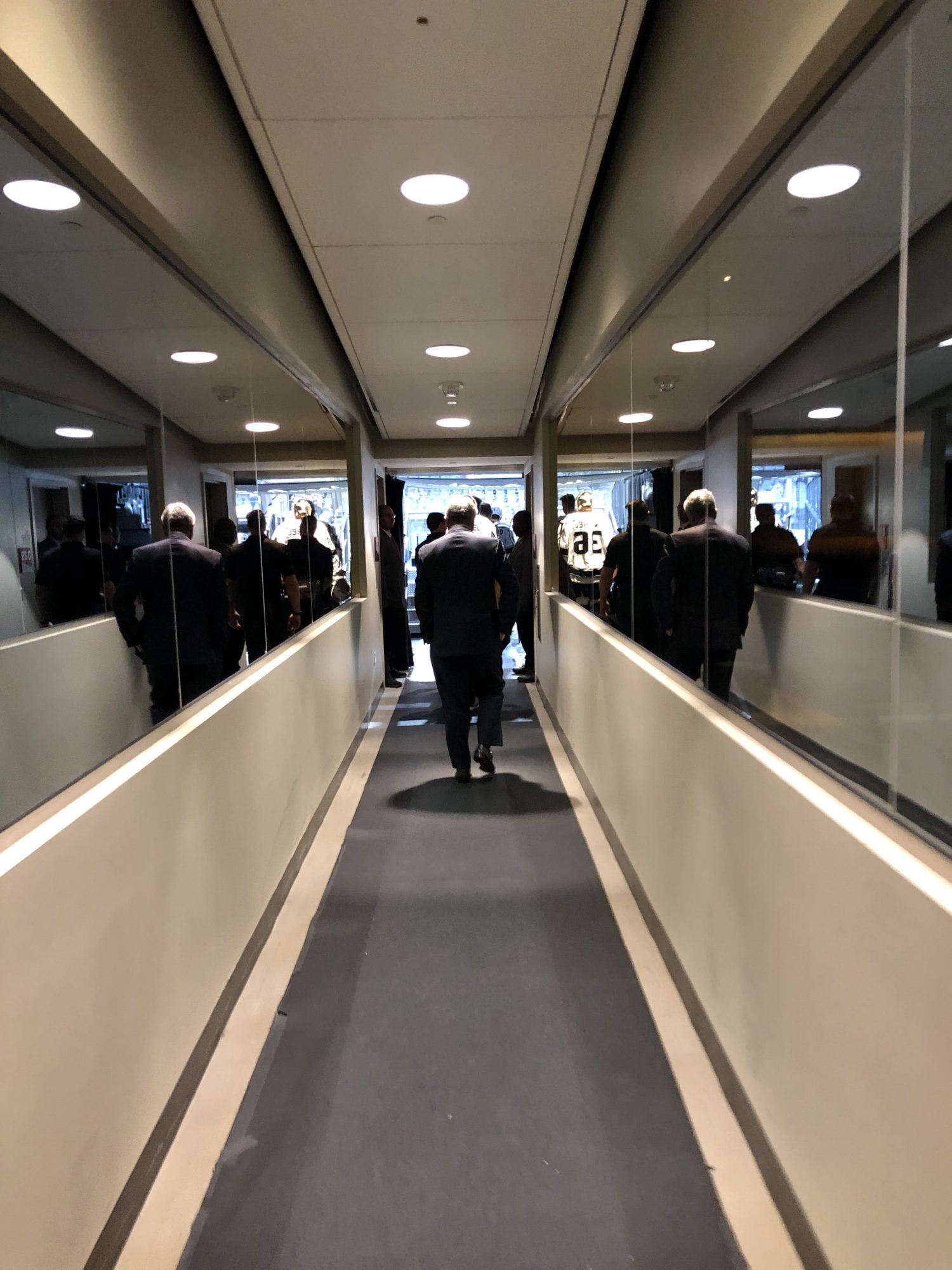 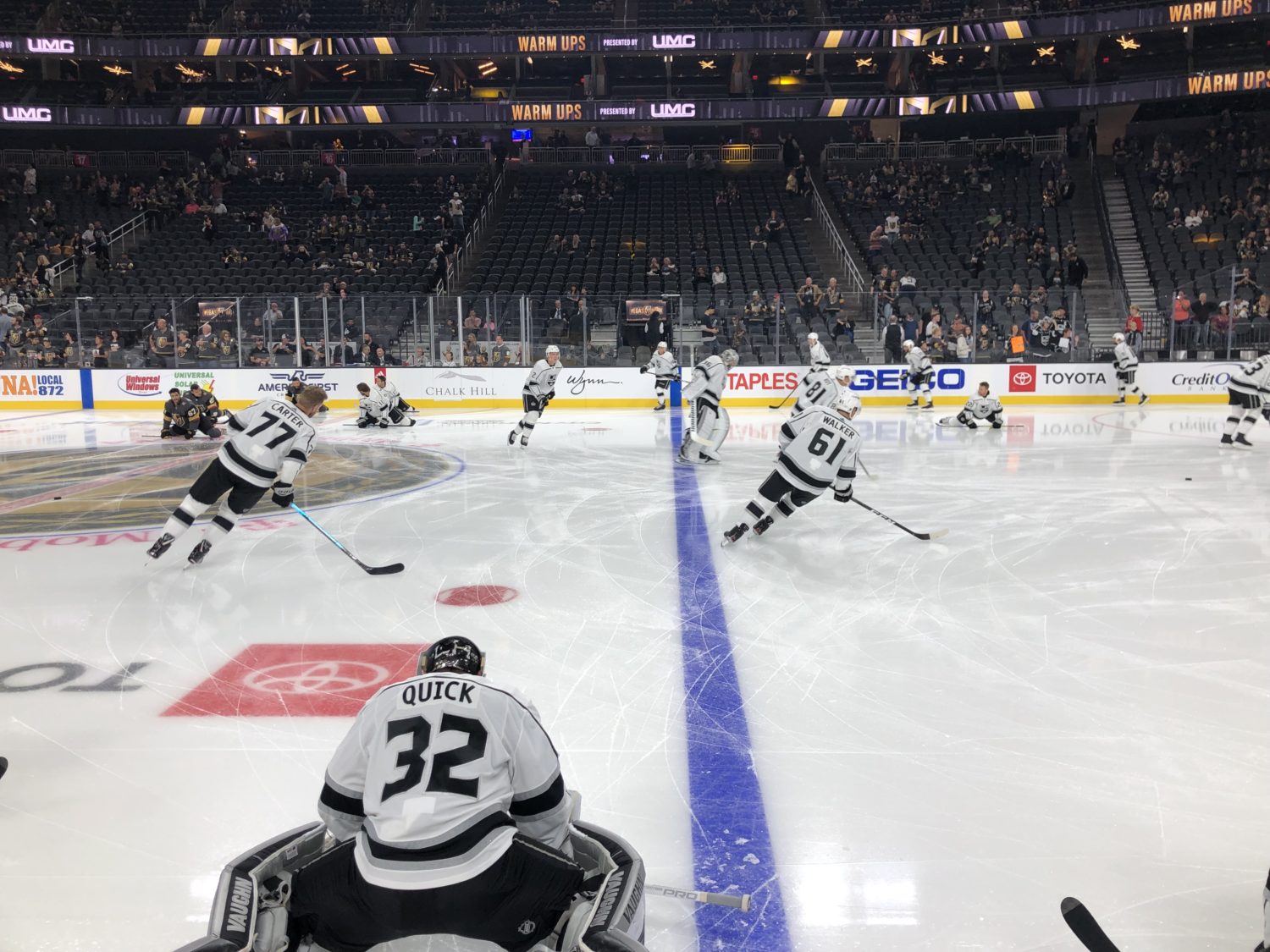 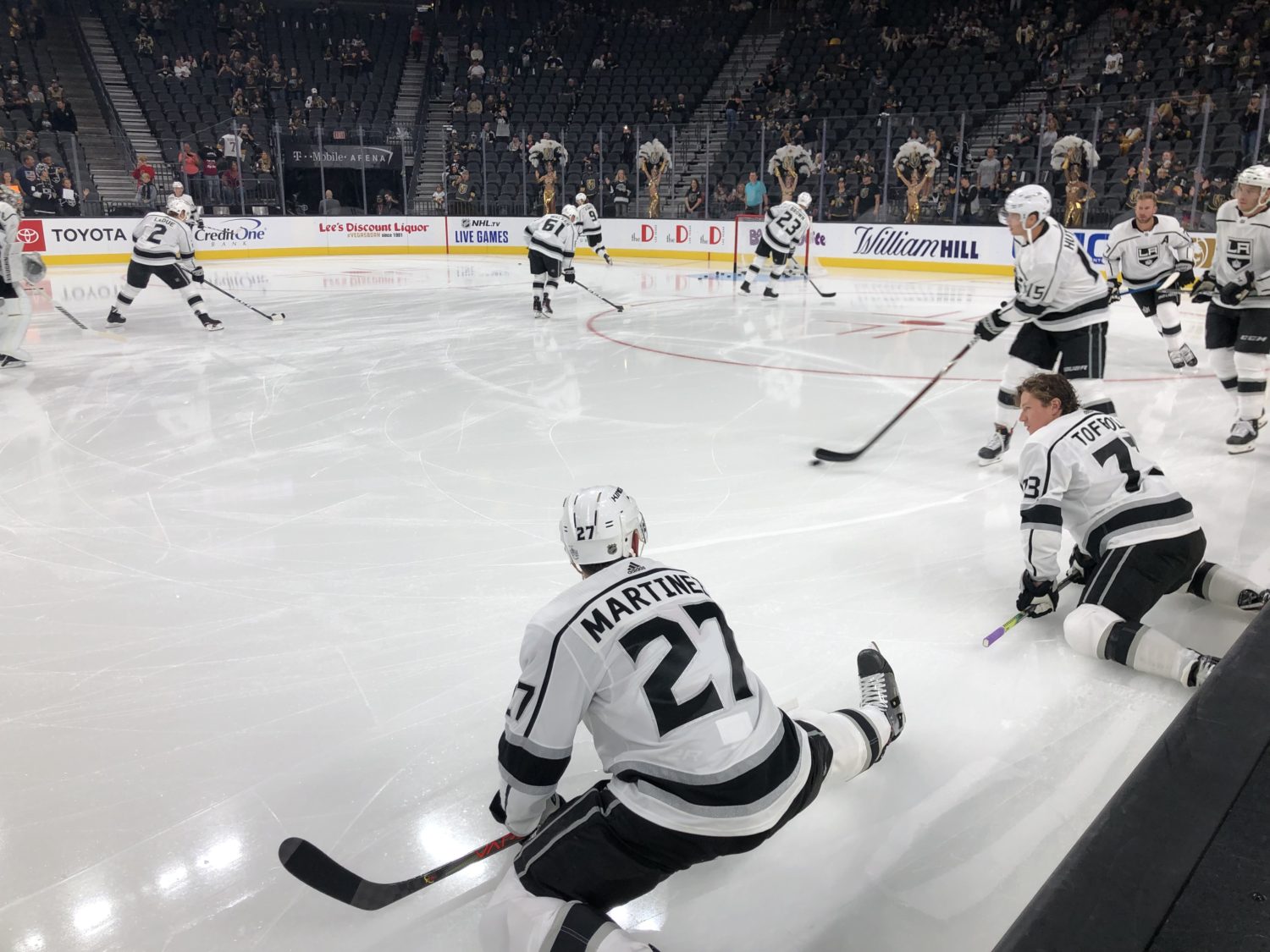 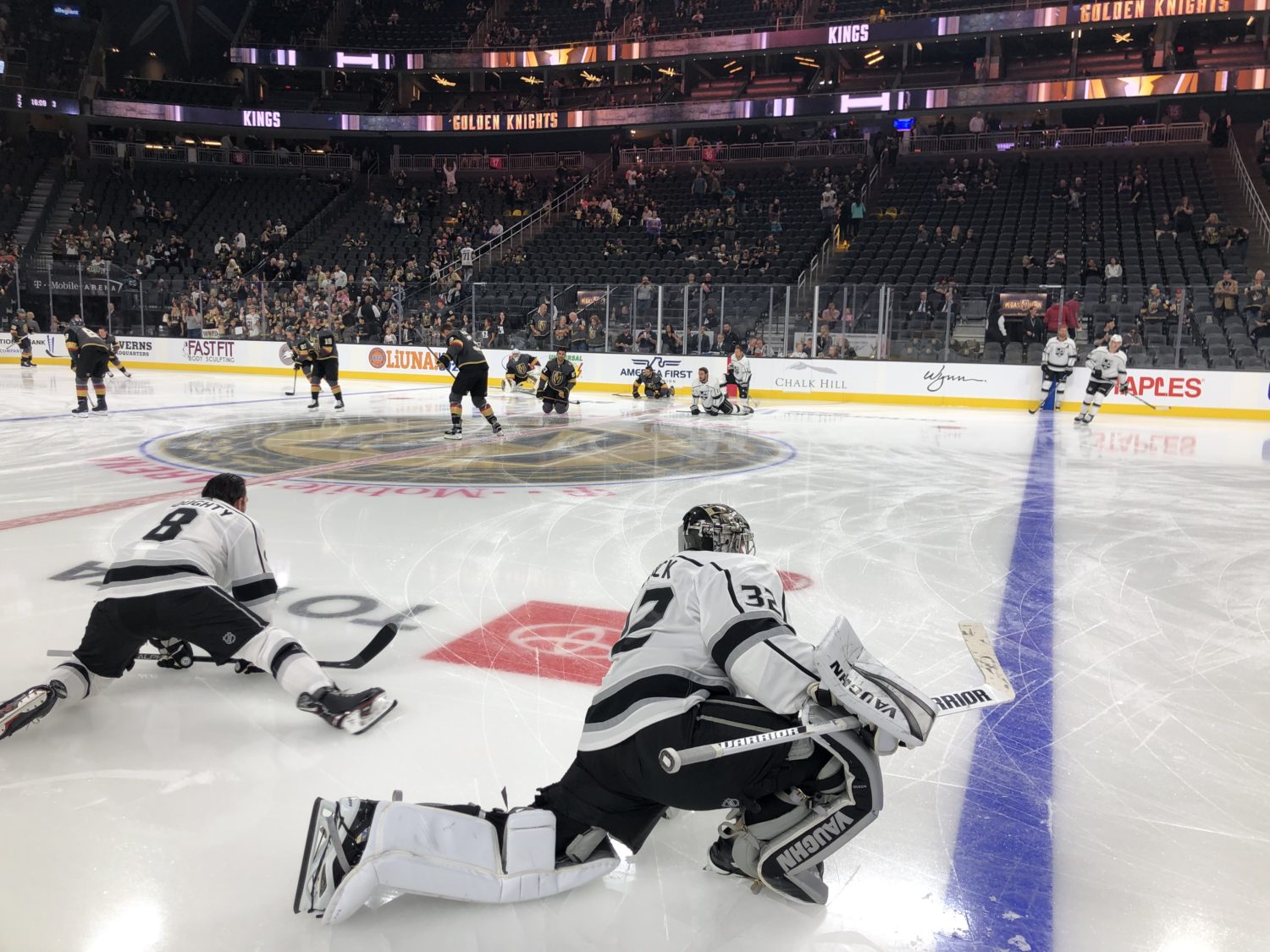 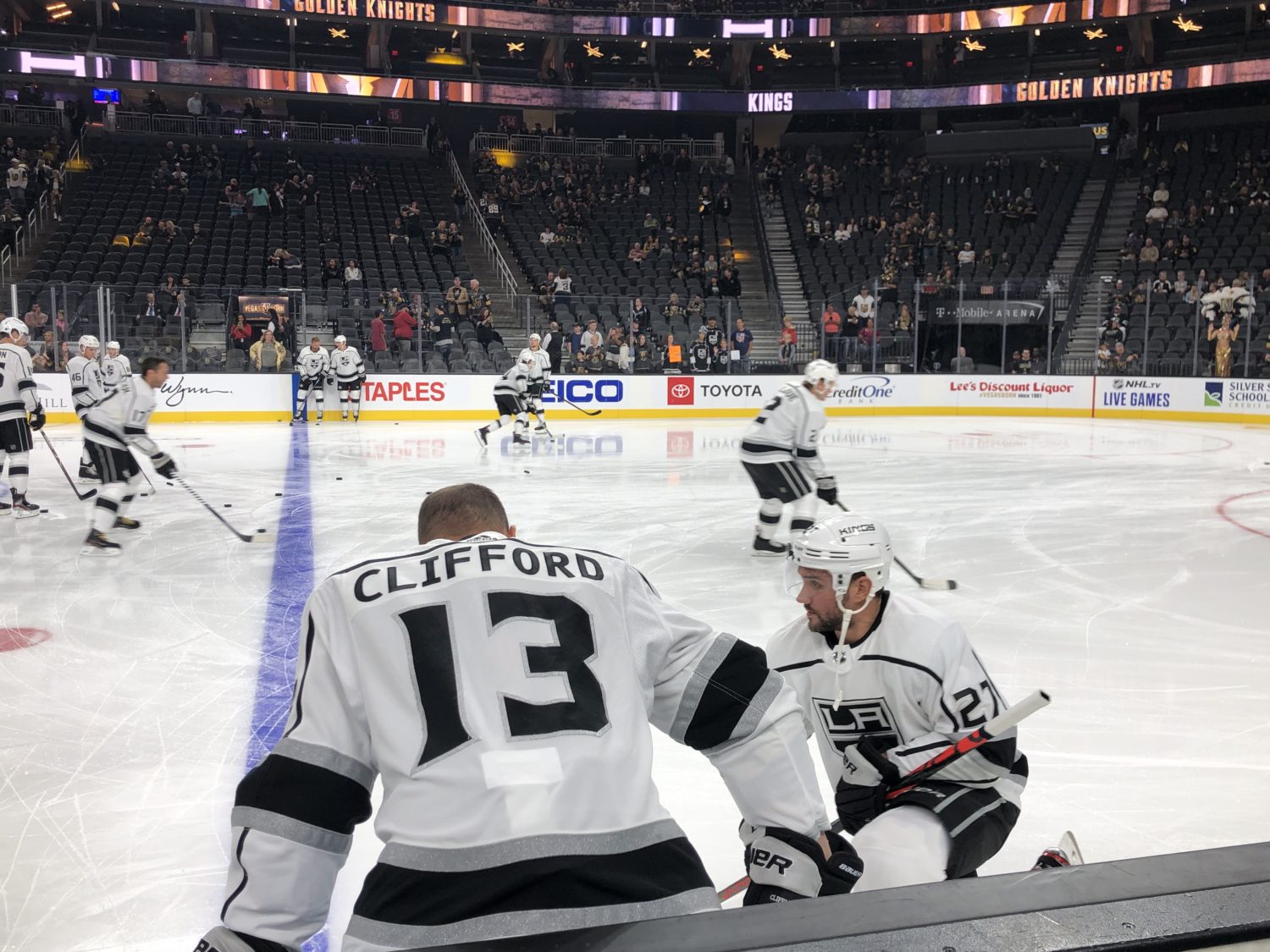