Third Period
20:00 – Third period is a go in SLC!
19:59 – Bachman has replaced McIntyre in net for Vancouver to begin the third period.
17:15 – VAN Penalty – Canucks with strong pressure to open the third, but now LA will get its third power play of the evening. Eyssimont is taken down by Graovac, who will sit for interference.
15:25 – Kings Goal – Martinez digs the puck out along the wall, cuts around the circle and into the slot and beats Bachman past the left pad with a wrister. Kings lead 5-2 and are now 2-of-3 on the man advantage.
14:13 – Weird glass in Utah….seeing pucks frequently shot high off the glass and immediately deflect out of play.
14:06 – Canucks Goal – Tanner Pearson revenge game. Brings his team within two.
13:47 – Canucks Goal – Leivo snaps one high glove side off an odd-man rush and suddenly we’ve got a one goal game midway through the third.
11:40 – Kings Goal – Frk gets behind the defense, takes a stretch pass and goes top shelf from close range. Nice finish, Kings regain the two-goal cushion.
11:05 – VAN Penalty – Kings get their fourth opportunity of the evening just 35 seconds after Frk’s goal. Graovac back to the box, this time for hooking.
9:35 – Kings goal, their third of the night on the man advantafe. Anderson-Dolan gets his second of the game, his pass hit a Vancouver defenseman and deflected past Bachman. All count the same on the stat sheet! 7-4 LAK.
6:38 – VAN Penalty Eyssimont drives down the left wing and is hooked to prevent him from getting to the net. Pearson the culprit. Kings back to the PP.
4:18 – Another big stop from Campbell, who contorts his body to deny Goldobin on the doorstep.
0:00 – Missed one Canucks goal, headed down to the locker rooms, but the Kings earn a 7-5 victory in Salt Lake City, as they improve to 2-1-1 in the preseason.

Second Period
20:00 – Back at it for the middle stanza, Kings with a 3-2 lead in Salt Lake City.
17:15 – Bjornfot is cool, calm and collected, especially for a young defenseman at this level. Think he’s had a good preseason so far.
16:15 – Clifford just planted Caufield, collision along the boards in the LAK end…..advantage Clifford.
15:50 – Kings Goal – Ben Hutton wires a shot from the left point that gets past McIntyre through a screen from Anderson-Dolan. JAD and Lewis get the assists, nice cheer as Lewis’ name is announced.
13:03 – Puck winds up behind Campbell after a scrum in front, but it’s immediately waived off. Looked like Campbell had the puck covered and was ran into, which dislodged it into the net.
10:12 – Not a ton of end-to-end play, but a couple shots each way over the last few minutes. Smooth breakout from Hutton – Martinez – Luff to evade a forecheck, leads to an Eyssimont shot the other way which is gloved and held.
10:00 – Attendance tonight is 10,014. Good turnout. As mentioned, lower bowl mostly full, upper endzones are closed off. Arena seats 18,300 for basketball.
6:42 – Two nice chances involving Bjornfot. First, Carter tees him up at the point, one-timer is saved. He activates later in the shift and sets up Anderson-Dolan in tight and McIntyre covers.
5:55 – Pettersson had a clear breakaway, but he tripped on the blueline. Still recovered to create a nice opportunity, but a bit contested and Campbell makes the save.
4:30 – Filthy stop from Campbell. Not sure he had full control of his stick, but he sprawls to his right to make the right pad save on Graovac, after he made the first stop on on MacEwen.


3:02 – Vancouver has taken advantage of the long change in the second period a couple of times now….this time Motte gets the stretch pass, slowly moving 2-on-1, fires wide and ricochets out of play off the glass.
2:02 – VAN Penalty – Too many Canucks on the ice, Graovac to serve for the visitors.
0:48 – Good strength and edge work from Prokhorkin on the PP to evade a couple of PK’ers on the break in. Impressive combination to keep control entering the attacking zone and allow for a setup.
0:00 – Kings do not convert on that last PP, move to 1-of-2 on the evening. They do, however, take a two-goal lead into the break at 4-2.

First Period
20:00 – Underway in SLC!
16:35 – Kings Goal – Anderson-Dolan drives the net hard and pokes home a loose puck through the pads of McIntyre, who couldn’t quite cover it. LAK with an early advantage. Clifford threw the puck into the crease from a sharp angle.
15:25 – LAK Penalty – Matt Roy sits for high sticking, in his own defensive zone to the left of Jack Campbell, Just 2 minutes, Canucks get the game’s first man advantage.
13:52 – 5-on-3 incoming for the Canucks as Mario Kempe goes low, almost onto his stomach, and trips up a Vancouver attacker. 28 seconds of two-men down for LA.
13:25 – One penalty killed, Campbell with a few stops to make, already has 7 in the game’s first 7 minutes of play.
12:42 – Canucks Goal – Gaudette re-directs a shot from the point from Edler, gets past Campbell who couldn’t do much else. 1-1 .
10:00 – Non-game related but a pretty good turnout in Salt Lake City. Lower bowl is pretty full, upper bowl along the sides looks pretty good too.
9:23 – Canucks Goal – Graovac moves in down the left wing, with MacDermid trying to catch up. The big blueliner gets there to force him wide, but Graovac beats Campbell from the left-hand circle.
9:14 – Kings Goal – Fast and furious! Mike Amadio’s turn. Take a feed from Mario Kempe and beats McIntyre from the slot on a 2-on-1 rush, nice finish for Amadio, who has had a strong preseason by many accounts.
5:30 – VAN Penalty – Forecheck from the Eyssimont – Prokhorkin – Luff line forces a shot into the crowd, Tanev will sit for delay of game and Kings get their first PP of the night.
5:15 – Martinez – Kempe – Amadio – Carter – Iafallo is the first PP unit for the Kings.
4:35 – Kings Goal – Amadio gets his second of the game. Great work from him to run the PP from the right-hand half wall, walks in and snaps a shot past McIntyre from the right-hand circle.

Whatever @M10amadio had for pregame meal, he needs to have before every game 🙃#GoKingsGo pic.twitter.com/S7EOydcnRT


3:17 – LAK Penalty – Anderson-Dolan sits for holding in the corner, Kings will head to the PK late in the first period.
1:17 – Nice job by LAK on the kill. Defensemen, and they rotated, did a good job of digging pucks out of corners, forwards applied pressure well. Back to even strength.
0:38 – Eyssimont fights through a hook, uncalled, at the blueline, takes it the other way and his shot is just sticked out of play by McIntyre. Had Luff streaking through the slot, though well covered.
0:00 – Kings lead by one at the break. Sneaky active first period for Campbell, who stopped 15-of-17 shots.

Carter, Martinez & Lewis have the “A”‘s tonight for the Kings. 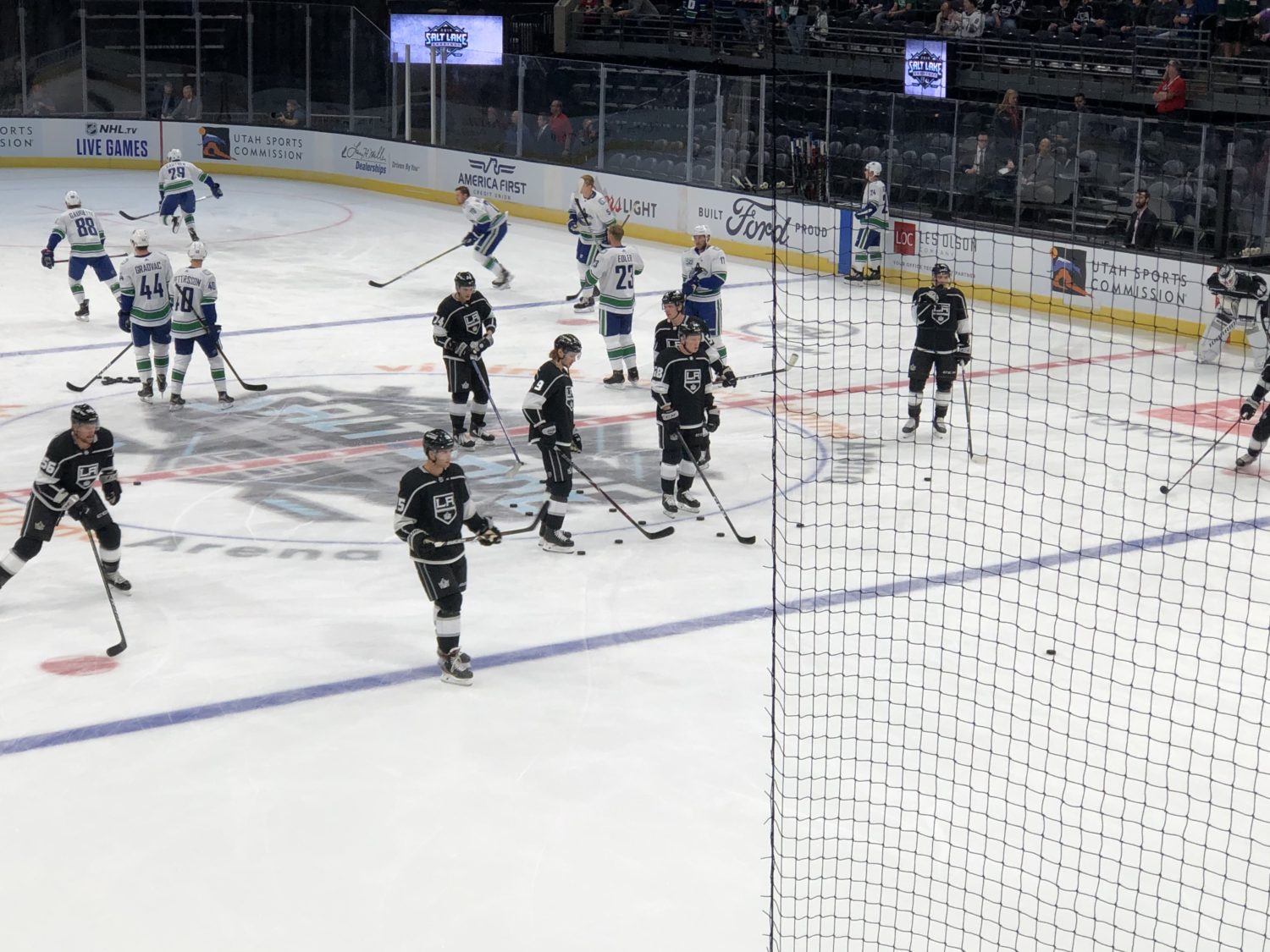 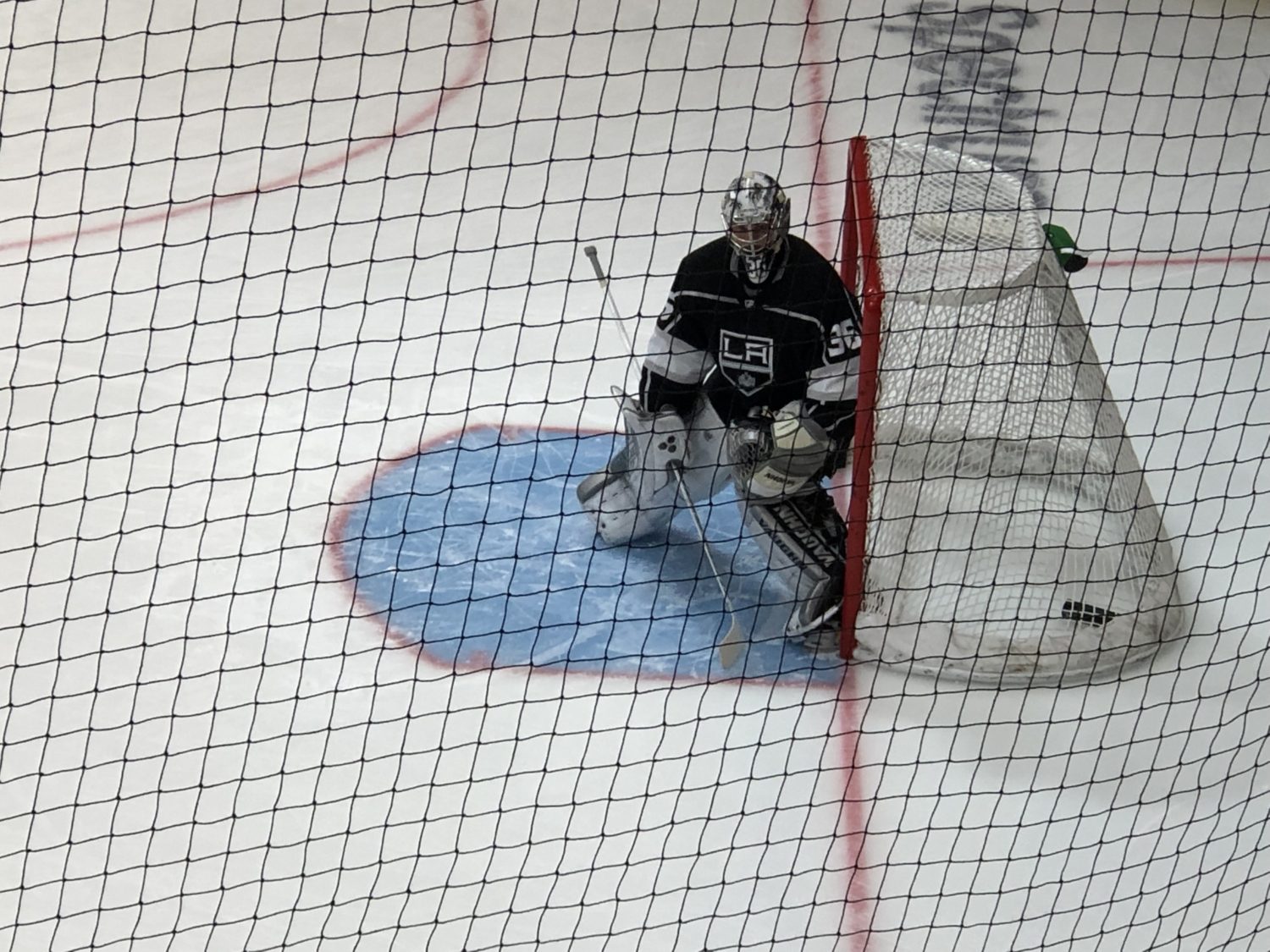 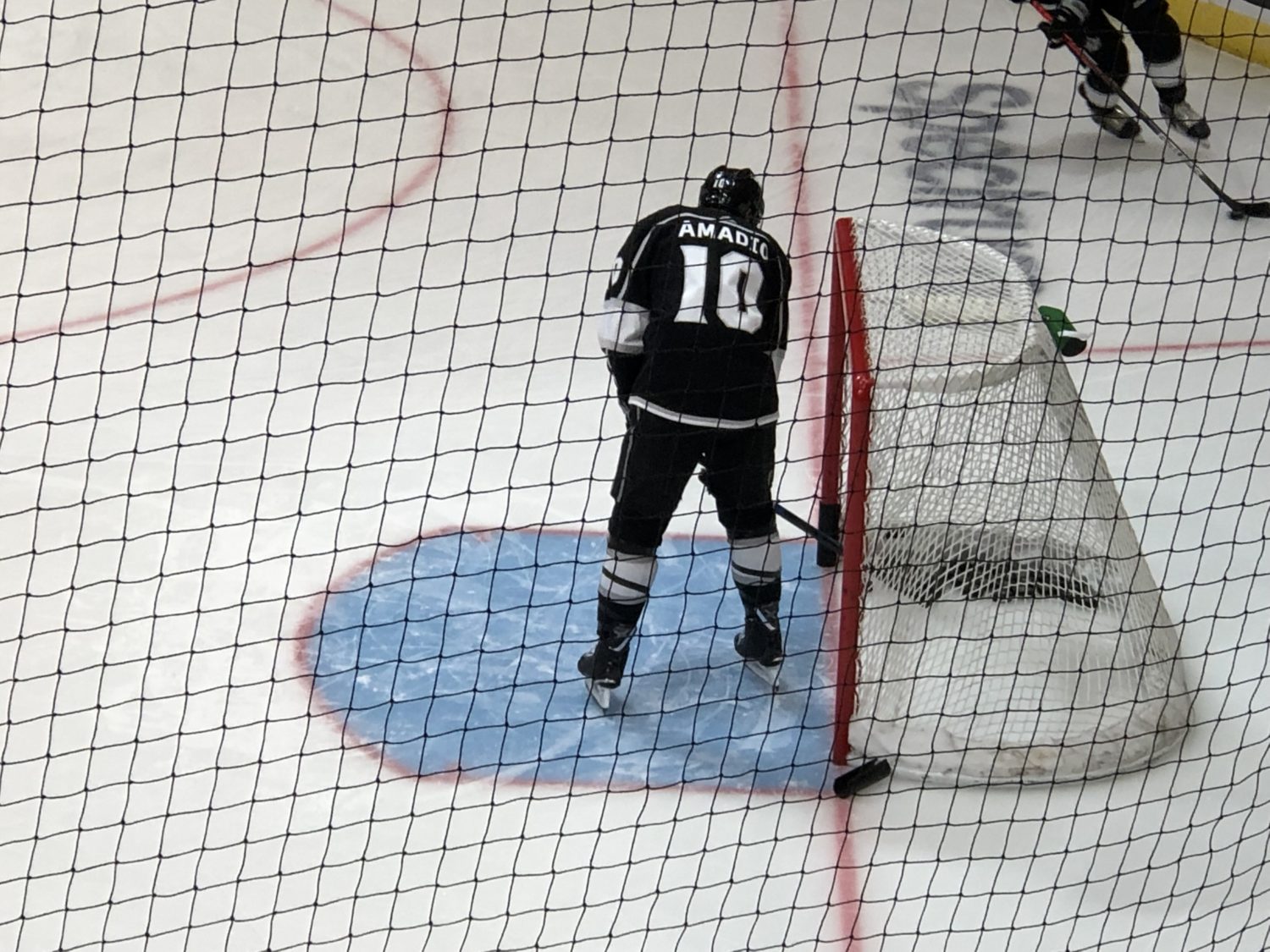 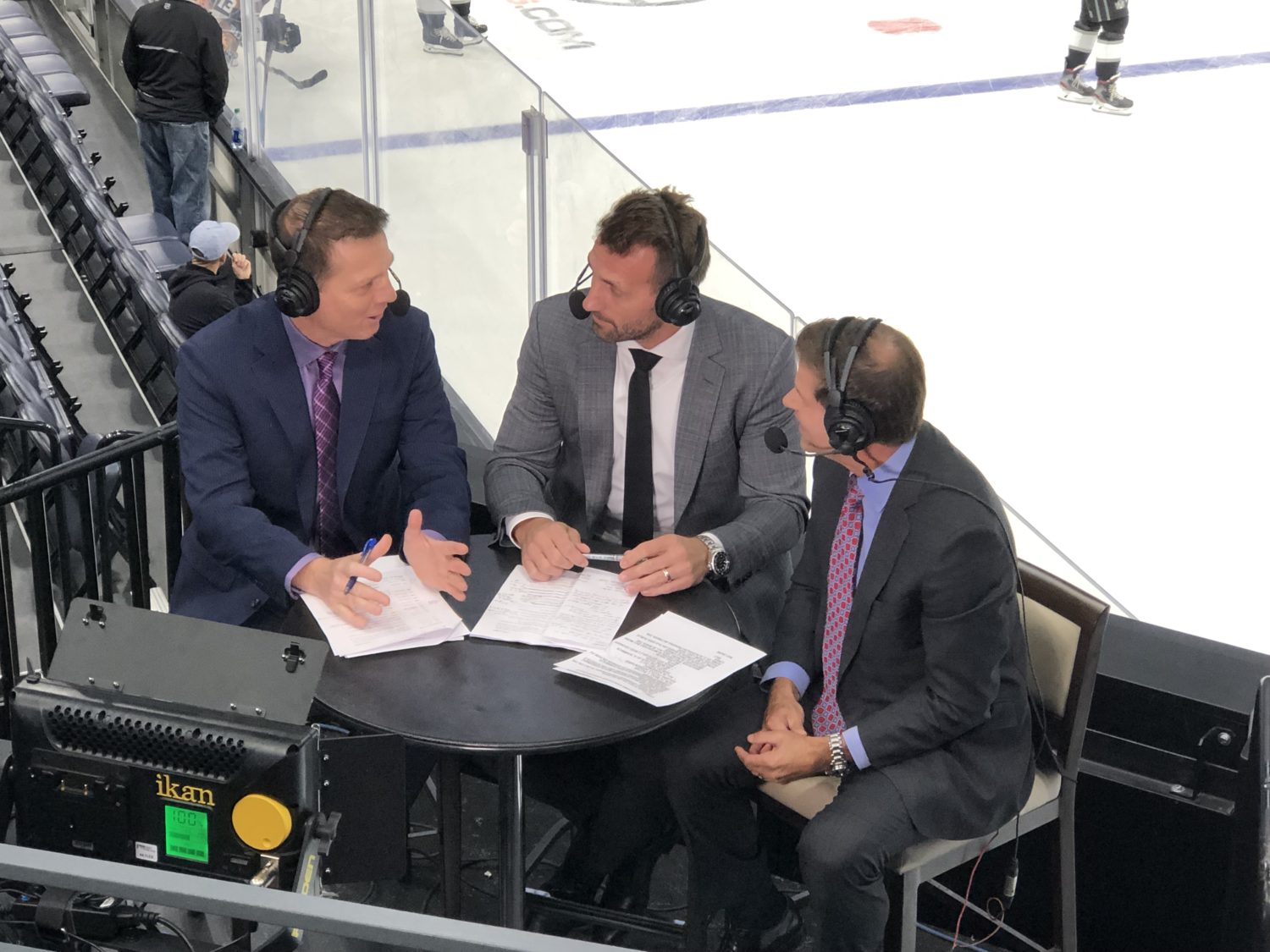