Marchesseault goes underneath the crossbar on a break during the second shift of OT; VGK wins, 3-2.

Third Period
20:00 – Toffoli up with Iafallo, Kopitar to start the third.
18:40 – PENALTY VGK. Schuldt for interference. Eyssimont-Thomas-Fagemo start the power play.
17:17 – PENALTY VGK. Eakin for tripping. 41 seconds of 5-on-3.
16:36 – Good pressure, but Kopitar can’t finish a Brown cross-crease saucer pass.
14:55 – Bjornfot caught a bit flat as Eakin dances around him wide and makes a move to the net but doesn’t get a great chance off.
7:24 – GOAL LAK. 2-0. On a rush, Toffoli issues a pass across the zone to an unmarked Lizotte, who reaches for it, receives it, and sneaks it between Dansk’s blocker and right pad.
10:44 – Brown’s wrister swallowed by by Dansk on a contested break.
10:10 – PENALTY LAK. Brown for interference.
8:30 – Good stick check by Eyssimont on Stone ends Vegas zone time. The Original Mikey having an excellent game.
6:47 – Confident Mario Kempe dangles deep into the offensive zone, but he runs out of some room and has a stuff attempt denied.
5:54 – GOAL VGK. 2-1. One a two-on-two, McKenzie’s centering pass is redirected by Ryan with a one-handed swat past Quick for an own goal.
5:00 – GOAL VGK. 2-2. Stone gets past the LAK defense and stickhandles the puck low, slipping it past Quick while Clague lunges.
4:09 – Eyssimont has some space from the right circle and wires a wrister into Dansk.
2:50 – Jimmy Schuldt turning it on. Denies a zone exit on the left side, nearly beats Quick with a shot above the right circle from the right.
2:20 – Cody Glass post. Vegas with pressure.
0:10 – With Megna draped on him, Toffoli wins a race to a loose puck and on a very contested break into the offensive zone is able to get a good backhand on net, though Dansk made a left pad save.
0:00 – To overtime.

LA's two most extended offensive zone forays have come through the Eyssimont-Thomas-Fagemo line. Eyssimont having himself a fine night. Pressure leads to Go Kings Go chants.

8:40 – Engelland plays Wagner with good cushion and doesn’t allow him to blow past.
8:20 – Wagner receives a puck wide and cuts towards the tops of the circles on a three-on-two, but Dansk stops his shot from the slot and the rebound is channeled wide.
7:22 – Clague takes a hit below the goal line but still advances the puck to Toffoli. Good job taking a hit to make a play.
6:51 – Quick swallows up Karlsson’s high-grade chance from the slot.
5:48 – Very good Quick pad save on Eakin’s bid from the mid-slot after the center found a seam and Walker didn’t react in time.
5:05 – LAK PENALTY. Anderson for hooking.
3:05 – Schuldt makes a dent where crossbar meets goalpost. Lots of posts tonight. VGK’s only really threatening PP chance; there wasn’t much for the first 1:59.
1:11 – VGK PENALTY. Duke for delay of game for putting a bouncing puck over the glass.
0:44 – POWER PLAY GOAL LAK. 1-0. Brown pots a rebound after Lizotte tees up Doughty for a one-timer. McFlurry Minute, second preseason game!
0:17 – Bad Religion’s Greg Hetson shown (and cheered) on the jumbotron.
0:00 – LAK 1, VGK 0 after two.

First Period
20:00 – Underway from DTLA.
19:07 – He didn’t stick the landing, but nice patience and shoulder fake by Anderson to get Karlsson to bite while pressured at the goal line.
17:40 – Vegas defends a promising chance well. Wagner-to-Grundstrom, who was alone in front, but Engelland gets his stick on it. L.A. with good pace early.
16:20 – Two rapid-fire good looks by Kale Clague denied. As Brown circles the net while strong on the puck, Clague activates. Brown hits him, but Dansk stops his quick release as well as the point-blank rebound.
14:40 – Duke attempts a big hit on Thomas, who stays strong on his skates and Duke bounces off him, falling to the ice.
14:05 – First Golden Knights shot. Good look from McKenzie from the high slot; pad save, Quick.
12:55 – Mario Kempe strips Karlsson, turns the puck around in the other direction. Nice defensive play.
11:30 – Good forechecking. Iafallo strips Cody Glass (?) on an attempted zone exit but feeds the puck into Kopitar’s skates to end the play. Good aggression.
8:30 – Walker, Fagemo generate quality looks as the Eyssimont-Thomas-Fagemo connection generates zone time down low.
8:05 – Sharp-angle Paul Cotter chance turned aside by Quick.
5:35 – Grundstrom follows up a blocked Kupari shot; Dansk forced into a save. Good job by Kupari staying on the puck while taking it from the perimeter towards the high slot.
3:53 – Good Quick left pad save on Duke’s goal line bid.
3:41 – Mario Kempe diagonal feed to the far post, but Dansk deflects it out of play with his stick before it finds Toffoli for a redirection.
3:21 – Stone stickhandles around Lizotte from the right circle but lifts his backhand over the net. Good chance, nice play.
2:35 – Vegas getting more comfortable in this game.
2:15 – Good Bjornfot defending, but Vegas making plays in the offensive zone. LA had chances to clear but failed and was fortunate they weren’t burned.
0:35 – Doughty one-timner blocked by Tuch; he regains the puck, drives down the left wing, but is denied by Dansk.
0:00 – ~fin~

7:00 p.m.: Looks like tonight’s lineup will be a mix of today’s two skating groups. I’ll have the alignment shortly… 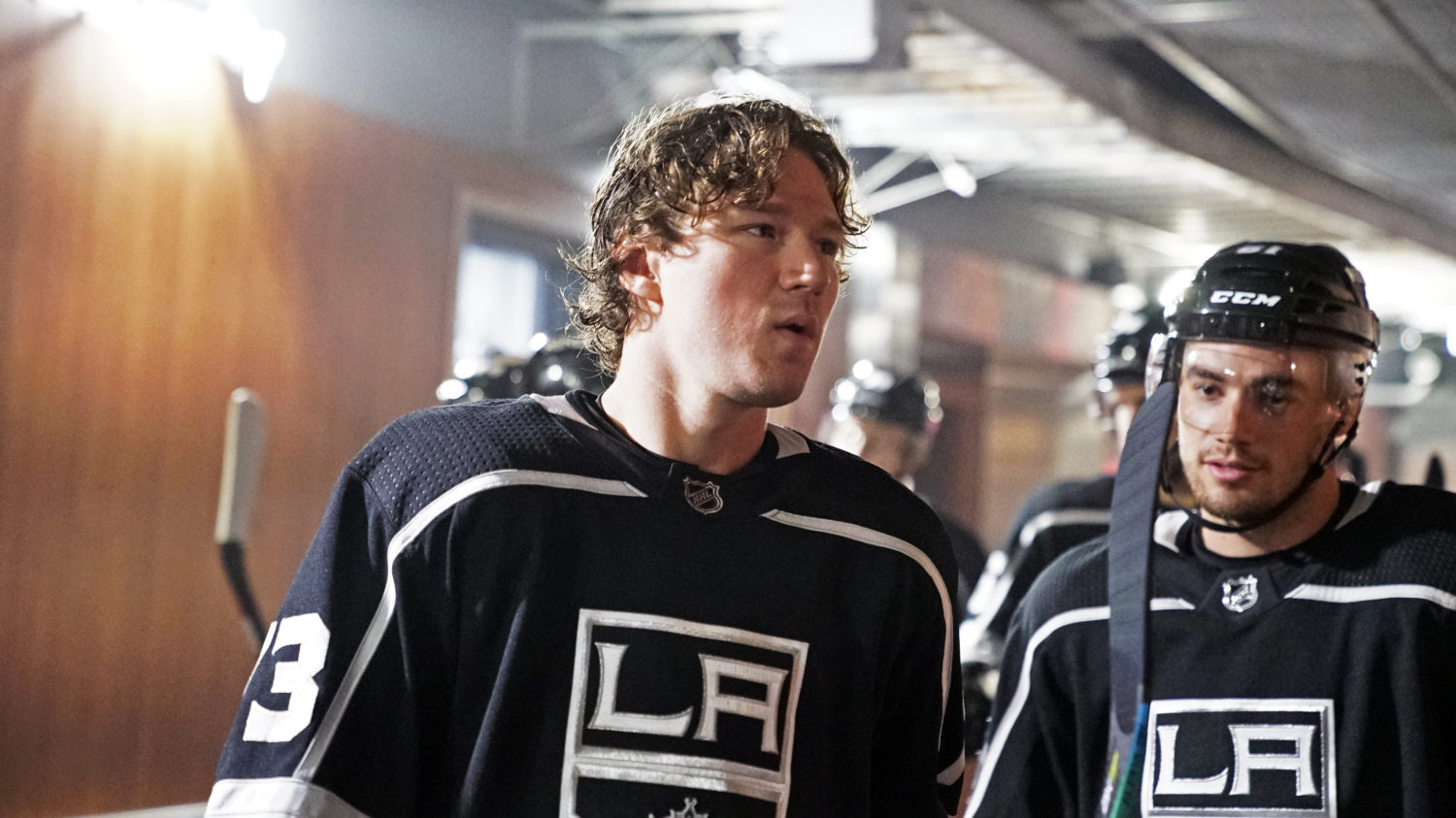 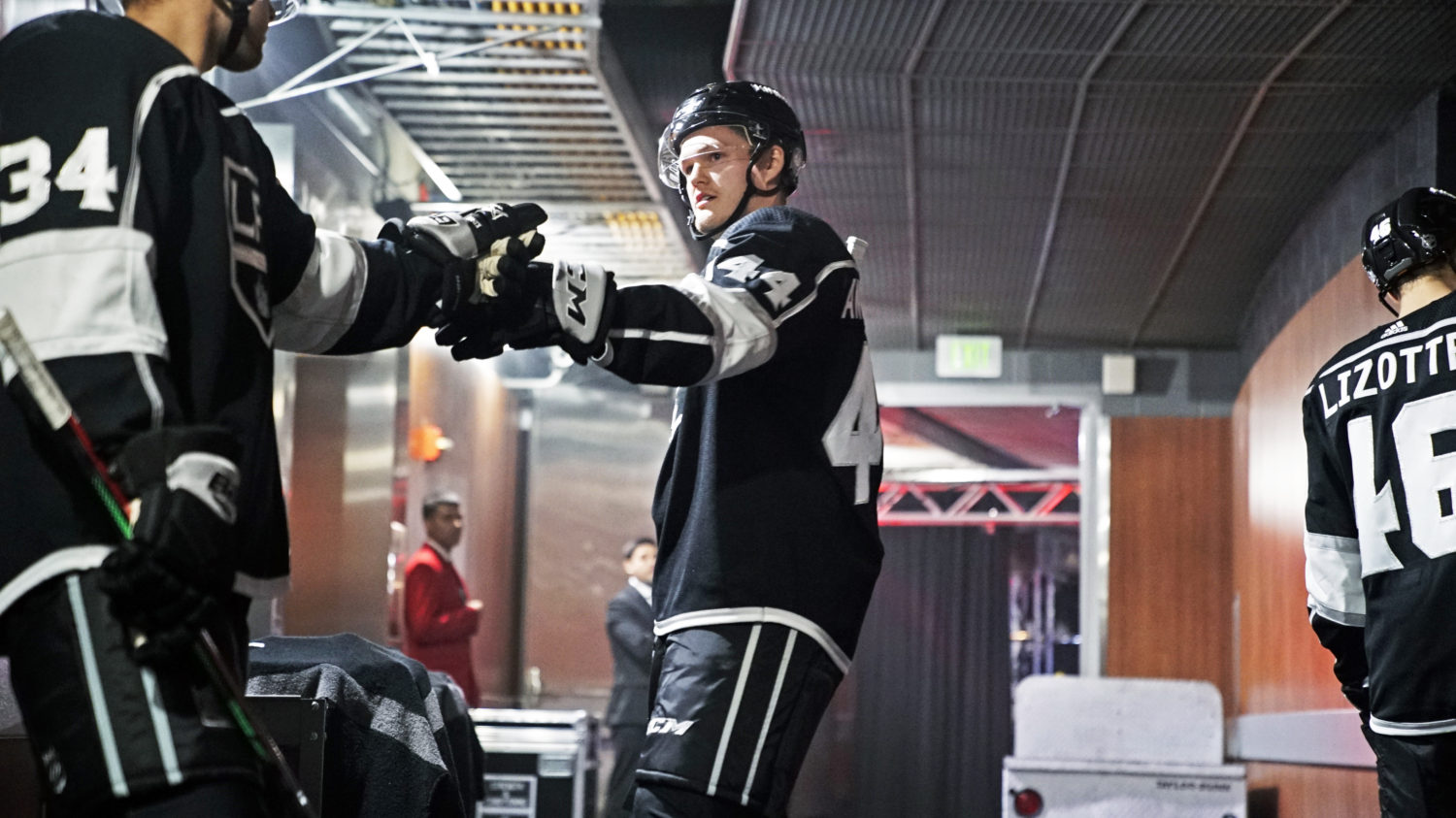 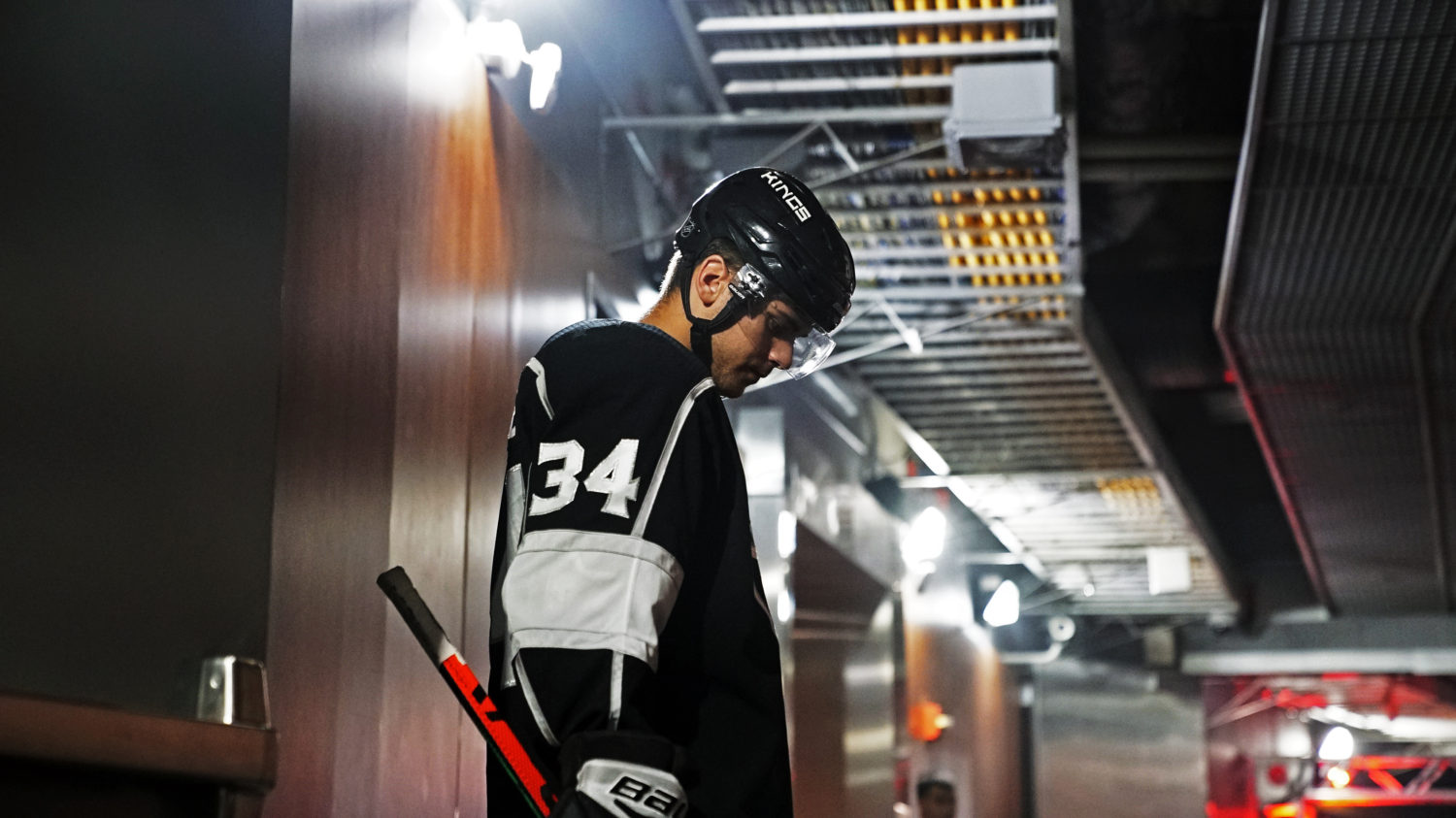 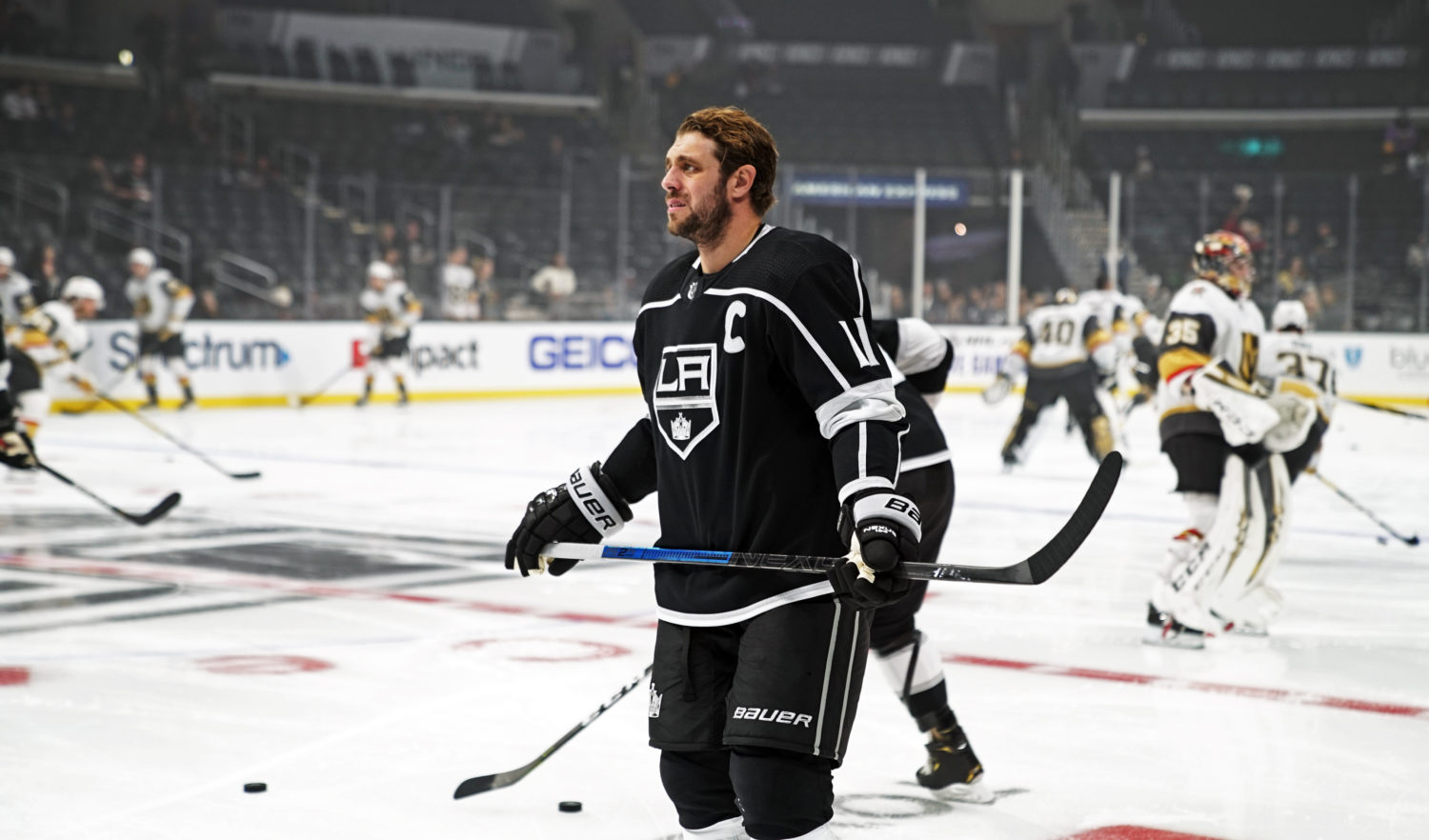