Tweaking their forecheck, the Kings want to play more aggressive. How might it look? - LA Kings Insider

Tweaking their forecheck, the Kings want to play more aggressive. How might it look?

The LA Kings were the NHL’s 30th place team a season ago, and as such, they endured a campaign fraught with ample shortcomings.

Some of the areas in which they fell short were based on personnel, on environment, on more intangible characteristics like “buy-in,” as was referenced on locker clean-out day last season.

A number of shortcomings were rooted in their structure. Some of that was on the coaching, some was on the players. Without breathing life into much of last year’s struggles, the structure that Willie Desjardins pushed wasn’t adhered to by the team in lock-step formation. “It’s not like people weren’t buying in last year, it’s just we didn’t know what page to be on,” Drew Doughty said Friday.

One issue? The team lacked a regular forecheck that matched the pressure they suffocated their opponents with during their virtually airtight zenith. It resulted in lopsided scoring chances against and the team’s first negative raw possession rate since 2007-08.

The first day of training camp was devoted to establishing that structure, and it resulted in a number of stops, starts, whistles and congregations around the white board. 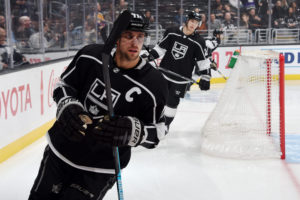 “Especially when you’re changing a forecheck, probably the biggest hurdle for the change is trying to get away from the habit of playing a 1-2-2, because for a guy like me and Kopi, that’s all we’ve played in our careers,” Dustin Brown said. “It’s not like a complicated switch, but you do something for 15 years, that’s where the mistakes are going to be. You’re going to see it in practice out there, all the reads and reacts. But having him be able to break it down for us is a big key for us.”

The key now is to implement some tweaks to the Kings’ system that strives to accentuate their forecheck and cadence. Based on what we’d heard from players on Friday, it’s going to favor aggressive pressure and a voracious bent to get the puck back that relies on the commitment by the individual.

“Battle’s such an overused word in our game, but getting there and winning them is important,” Todd McLellan said. “But what are the other pieces doing? How quick do they arrive? Are they on the scene at the right time, or are they just a little bit late? That adds pace and aggressiveness to the game. That comes through a mindset, but it also comes through some structural changes that we’re going to make to our play. We’ll see some of that in the forecheck, some of that in the neutral zone as time goes on. Right now, they’ll work really hard, they’ll probably slow themselves down because they’ll be thinking rather than reacting, and that’s what we truly want to avoid, but it’s inevitable that it happens. But that’ll give us moments to fix. By the time we get up and running and playing, hopefully it just comes to them naturally and we’re a little more assertive.”

Playing a style that was both firm and fast was a staple of San Jose’s play under McLellan, but it’s also a style employed by a good number of NHL teams. Vegas, when they’re operating well, is as fast of a team as they come, and that’s not just through their individual speed, but also through their decision-making and hellacious puck pursuit upon losing possession.

Did the team watch any San Jose video clips as a teaching model? What about any other team’s clips?

“We were looking at some San Jose clips,” Anze Kopitar said. “We were also looking at some Nashville clips. Those two, when they come to mind, it’s a very aggressive team, especially on the forecheck, so we’re trying to obviously get our own system in check, but maybe copy them a little bit.”

Todd McLellan, on the differences between his structure and previous schemes the team has used:
There’s just a little bit of different positioning – and I coached that way in the past, as well. The game’s changing a little bit. The pace and the ability to strike the puck is happening a little bit quicker. The puck is getting flushed out into different areas than it has in the past, so for us, we worked on the offensive part of the game today – entries, forecheck. The forecheck part we’ll change from what they’ve done here in the past. It won’t be significantly different. You might not notice it right away, but hopefully we end up more aggressive and turn more pucks over.

Anze Kopitar, on Todd McLellan’s message on the first day:
Definitely a great communicator. Very loud, vocal, and he gets his message across, which at this time of the year I think is very important, especially since we’re trying to implement a new system and changing the system a little bit, so it’s very important to communicate, talk and just make sure everybody’s on the same page.

Kopitar, on the challenge of shedding old habits when learning a new system:
That’s where obviously Todd comes in. Talk to him a lot and communicate. For obviously the first day, he’s encouraging us – and maybe it’s not going to sound great – to even make mistakes, but to get it right. With repetition, we’re going to get it right. Even if you make some mistakes in the beginning, it’s not a big deal. In his words, we’d rather make them now than in October, so we’re just working towards that and just trying to find it, first off, within the line, and then within the team.

Kopitar, on the team’s mood at the outset of camp:
The excitement is high, of course. Obviously after last year, everybody’s fired up to get back out there and make a difference. I think we had a good first day. It was very upbeat, very fast tempo and it’s going to be more of the same throughout training camp.

Dustin Brown, on how Todd McLellan communicates effectively:
He actually brought it up the other day – his language. Whether it’s ‘bump’ or – every coach has different words that they like to use for the same thing, but we’re changing our systems a little bit. I played the 1-2-2, and what we’ve generally played here for 16 seasons now has been a little different than what we’re playing this year, so it’s just communicating, but also being open to mistakes, because there are going to be a lot of them over here in the next little while, just adjusting to a different type of play. But I think it’s exciting. [Reporter: Do you appreciate that as a player, just having a coach that knows that?] I mean, it helps. It helps just having a guy where you know where you stand and you know what he wants. Like I said, the first practice we did, he really broke it down. Lots of whistles. Here, here. Figuring it out. It actually kind of reminded me of – I can’t remember what year it was, but we had spraypainted circles on the ice with Terry Murray. That was when we were trying to really figure out our defensive zone home base, and little kids had spraypaint on the ice to come back and stop on the circle. Very similar feel to that today, just on the opposite side of the puck.

Brown, on his initial impressions of McLellan:
Really good communicator. I mean, it’s only been one practice, but we’ve had a few meetings. We’re changing some things, so it’s important that we have that communication and understand what we need to do as players. It’s been, like I said, one day, so it’s been good.

Brown, on the mood around the team at the outset of camp:
I mean, it’s hard to tell right now. We’ve got 60 guys in here or whatever it is. I mean, every training camp kind of has the same feel. I kind of think that training camp really starts – this is like the training camp to the training camp because there are just so many guys. There are going to be guys that play in junior this year that are out there today. When we kind of whittle it down a little more, that’s when you kind of get a feel for what kind of group you have.

Brown, on whether there are more “uncertainties” this year than previous years:
I think there’s more opportunity for new players to push some other players out of the way. That’s the nature of the business we’re in. No one’s going to say, ‘I don’t want to play, you guys can have the spot.’ I think that’s a good thing for the makeup of the team and for the organization as a whole – if you don’t have younger guys pushing for spots, then you’re stuck. That’s what you want, the competitive nature, and then as an older guy, at least for me, it’s ‘come and take it if you can.’ 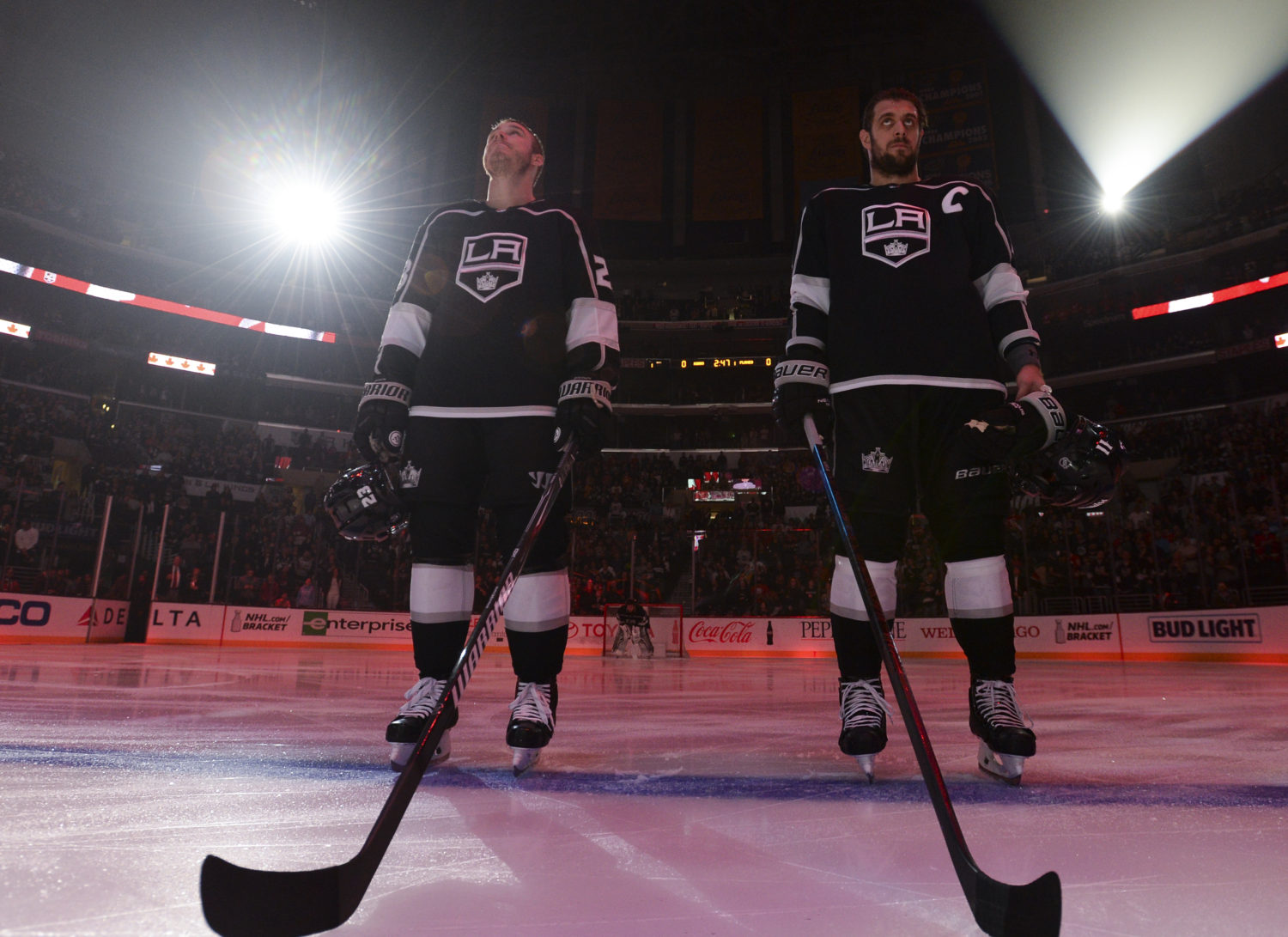