Insiders. There was some pretty big news over at TSPC this week. Notice that I no longer say “TSC” (and also no longer say ‘libary’ or ‘tomorrie’.)

The extra P is for Toyota Sports Performance Center. There’s a new partnership, a new team physician in Dr. Frank Petrigliano, and after Wednesday’s public unveiling in El Segundo, a brand new sports medicine and athletic rehabilitation center under the same roof as the three ice sheets. Moving into the practice courts and open spaces vacated when the Lakers moved across the neighborhood, the Keck Medicine of USC and Meyer Institute of Sport will provide athletic training and rehabilitation resources to both the LA Kings and local communities. John Meyer, Director, Player Health and Performance, heads the team’s training, medical and conditioning department.

TSPC’s additions provide a sizable reinforcement to sports performance and rehabilitation centers in the South Bay and the Westside, from which they’ll draw the heavy majority of their clients.

“It is pretty unique that this is not going to be closed behind iron doors,” LA Kings COO Kelly Cheeseman said. “It is a facility first for our players and our teams – not just the Kings, but also the Galaxy and Ontario and Berlin – and that was really critical, to look at it as a collective for our ownership group. But also we wanted to create a partnership that had true benefit to the community, and that’s truly what we’ve always been about. It’s pretty unique, and it’s probably a bit inspiring to be treated at the same place the LA Kings are treated at.”

Plans didn’t call for a surgery center, and there’s no MRI at the new facilities, but all other athletic training and rehabilitation features will be available under the same roof, easing the logistics for those who use TSPC regularly, including the Kings.

“Everything else can pretty much be treated on site, and the recovery process can happen on site,” Cheeseman said. “There’s internal medicine here as well with Dr. Oberle, who has a background in sports medicine but also internal medicine. Then, obviously you have Dr. Frank Petrigliano on the orthopedic side, and they’ll be able to deal with a lot of different injuries from youth all the way up to adults. That’s the beauty of it.”

Such an arrangement was the result of an extended and multidimensional process that ultimately saw the Kings transition from the Kerlan-Jobe Clinic and Dr. Ronald Kvitne, who had three decades of experience as team physician through which he developed intricately close relationships with players, coaches and club figures. More on the team’s diversifying practice facility is below:

LA Kings COO Kelly Cheeseman, on a centralized performance facility being of use to the team:
That’s exactly it – it’s a one-stop shop for our athletes from the time they’re training on a day-to-day basis to the time of a potential injury, recovery, rehab, everything’s in one stop for them. We’re able to probably focus in a little bit more in terms of the way they’re going through that process and now here today, we brought in two of the best partners in the world to operate the facility for us.

Cheeseman, on how TSPC benefits local communities:
I think it really benefits the entire westside. With the bio-mechanics lab that’ll be here and the Meyer Institute of Sport as well as the orthopedic center with Keck, there’s really no other facility like this in Los Angeles. We wanted to focus on being open to the public so that all the residents of this facility – this facility’s traffic is over 1.3-million visitors a year – can be serviced and treated by the best in the world. The best in the world are treating the LA Kings and all the AEG teams, but it also allows us to be open to learning other treatments for different types of sports and athletes and that was a big focus of our decision.

Cheeseman, on the integration of Dr. Frank Petrigliano as Team Physician:
There was nothing in terms of a decision as it relates to a lack of performance for Dr. Kvitne and Kerlan-Jobe, who were outstanding partners for a really long period of time, and we owe them all the gratitude in the world. It’s just when we made the choice to partner with Keck Medicine-USC and Keck Orthopedic, it was time to turn the page. With the partnership with them, they wanted to go and recruit the absolute best here to come and be our team doctor and the lead doctor at this facility. I think they landed a really good one, a fantastic doctor with great experience. But at the end of the day, just for us, this was always about John Meyer and the Meyer Institute of Sport leading that process for us and overseeing the health and performance for our team.

Cheeseman, on building the relationship between the team and Dr. Petrigliano and his staff:
That started from the moment he was hired. John Meyer and Chris Kingsley and Matt Price really started integrating him into the process of what his responsibilities are with the organization. Chris has been outstanding in getting to know him and introducing him to the players and the staff. And it’ll take time to establish the same relationships – but again, it’s really about the medical staffs on a day-to-day basis, the collective group, the talent that’s assembled there. It’s not necessarily about one person, it’s about the collective group, and this facility and everybody that’s going to be here – I mean, there are dozens of people that’ll be involved in the process moving forward here for the health and performance of our teams, and that’s what’s really exciting, and they’re going to be exposed to all different athletes at the collegiate level, the professional level, and that’s really exciting. The youth here and the parents here will all benefit from it, and I think Keck is already extremely happy with the amount of traffic they’ve had in the facility independent of anything else that’s gone on. 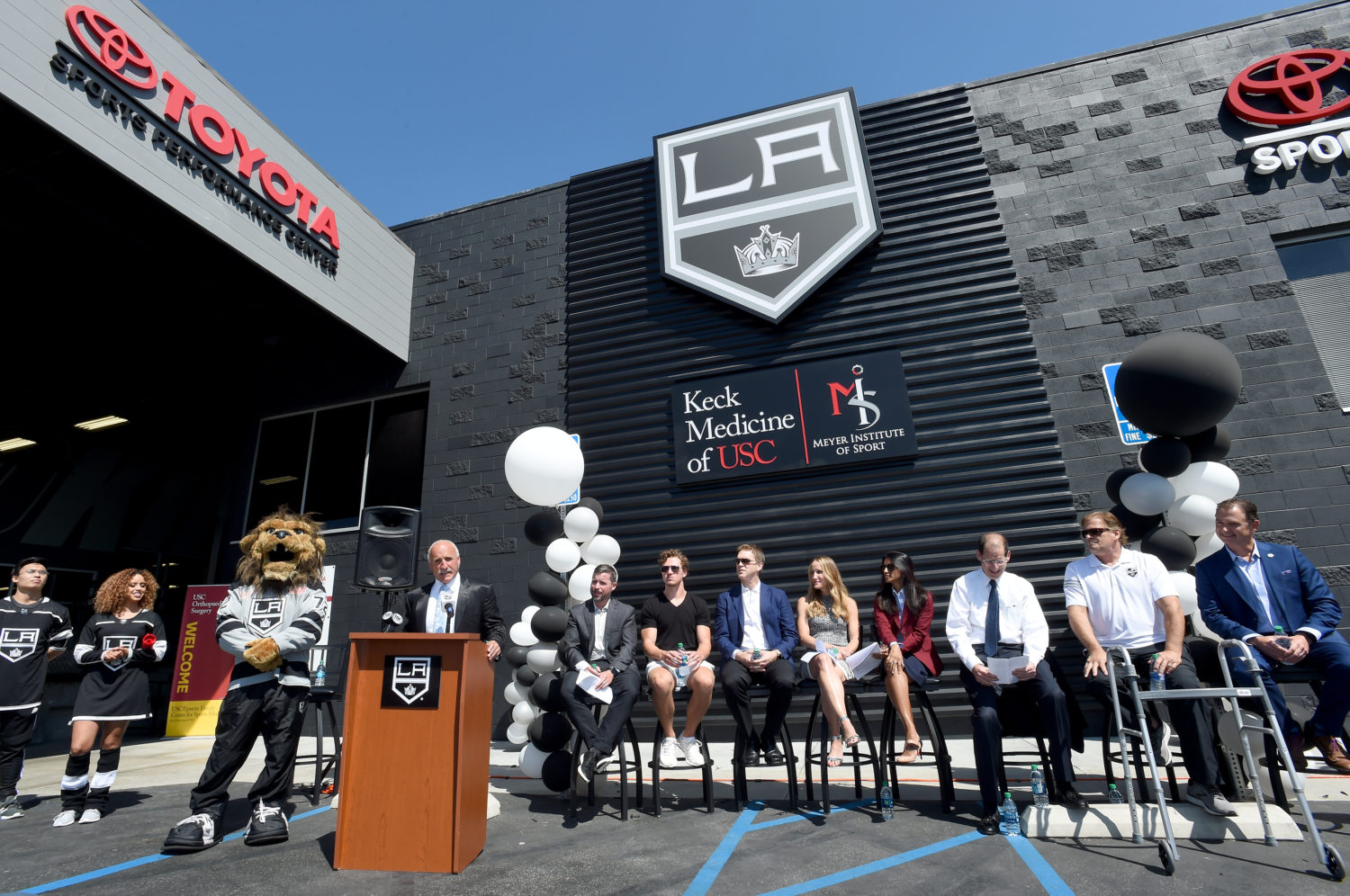 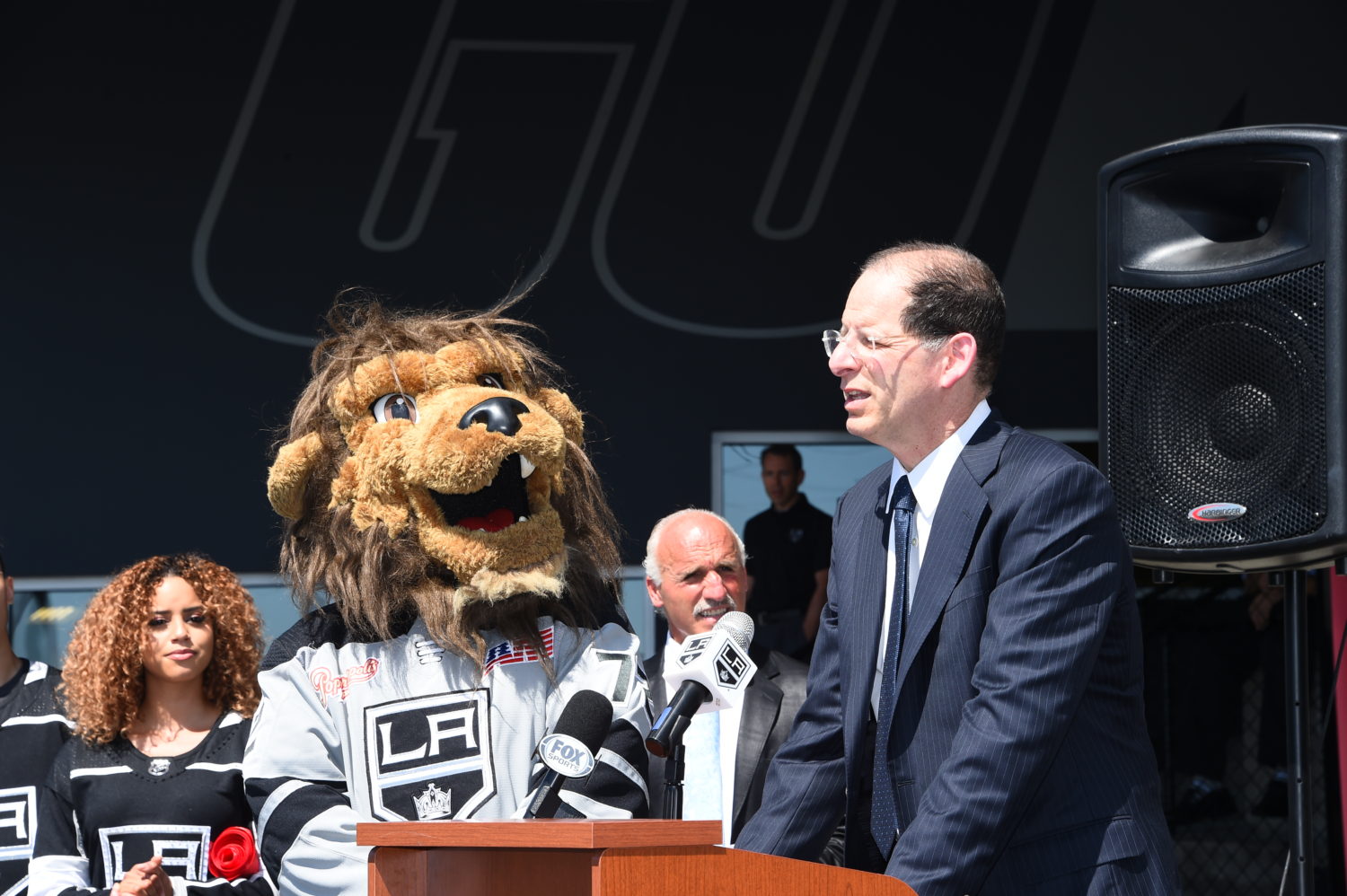 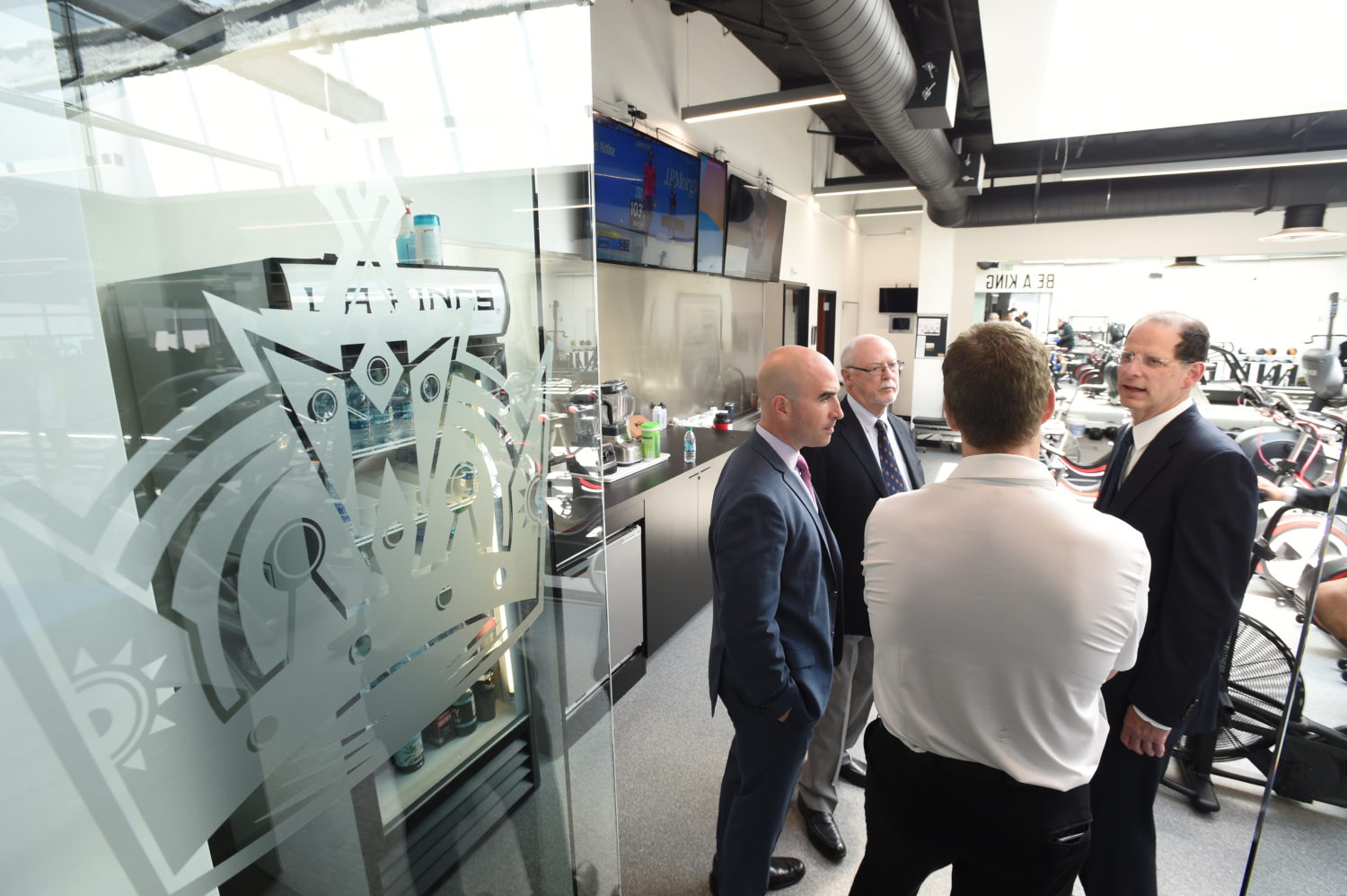 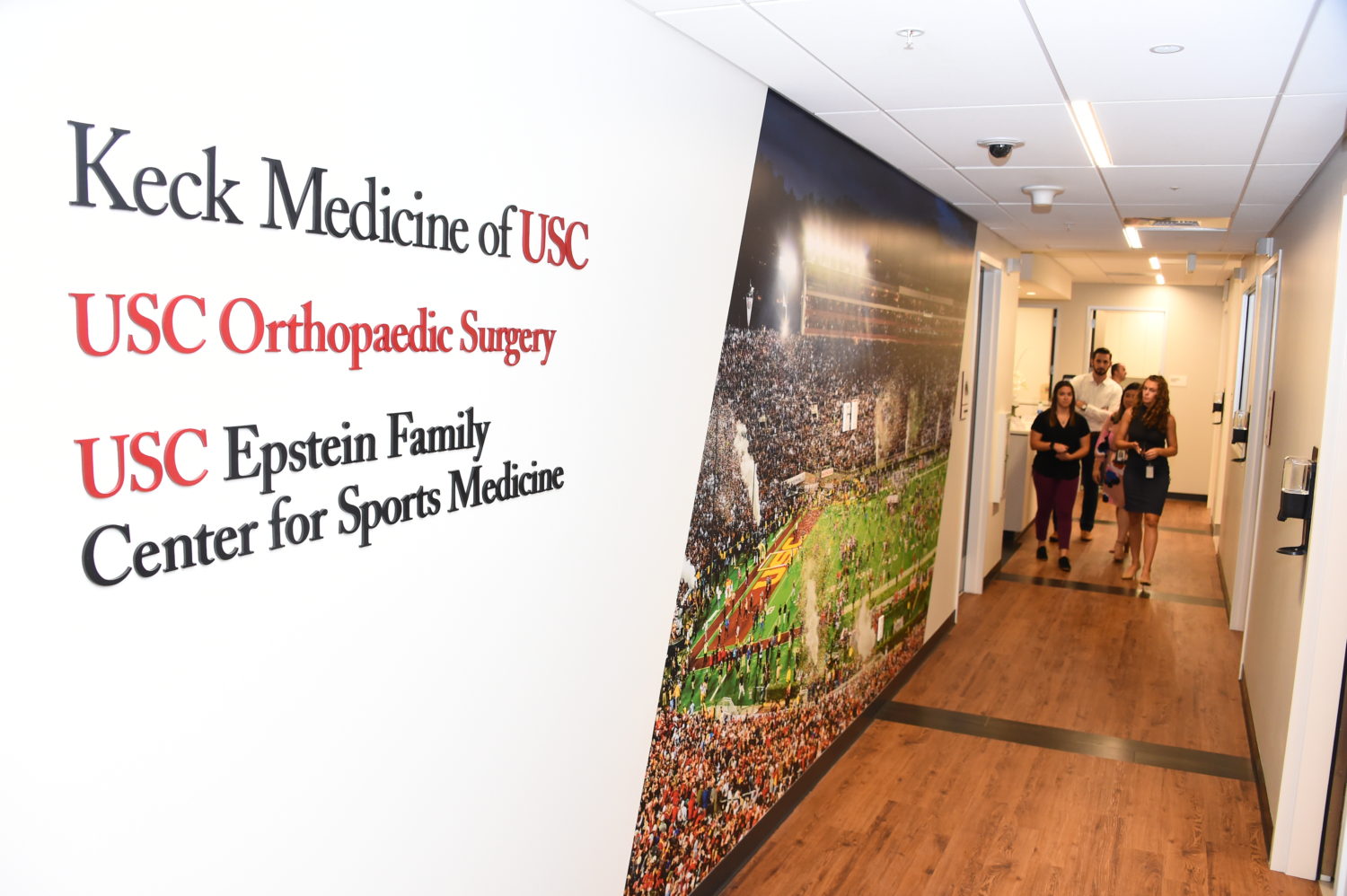 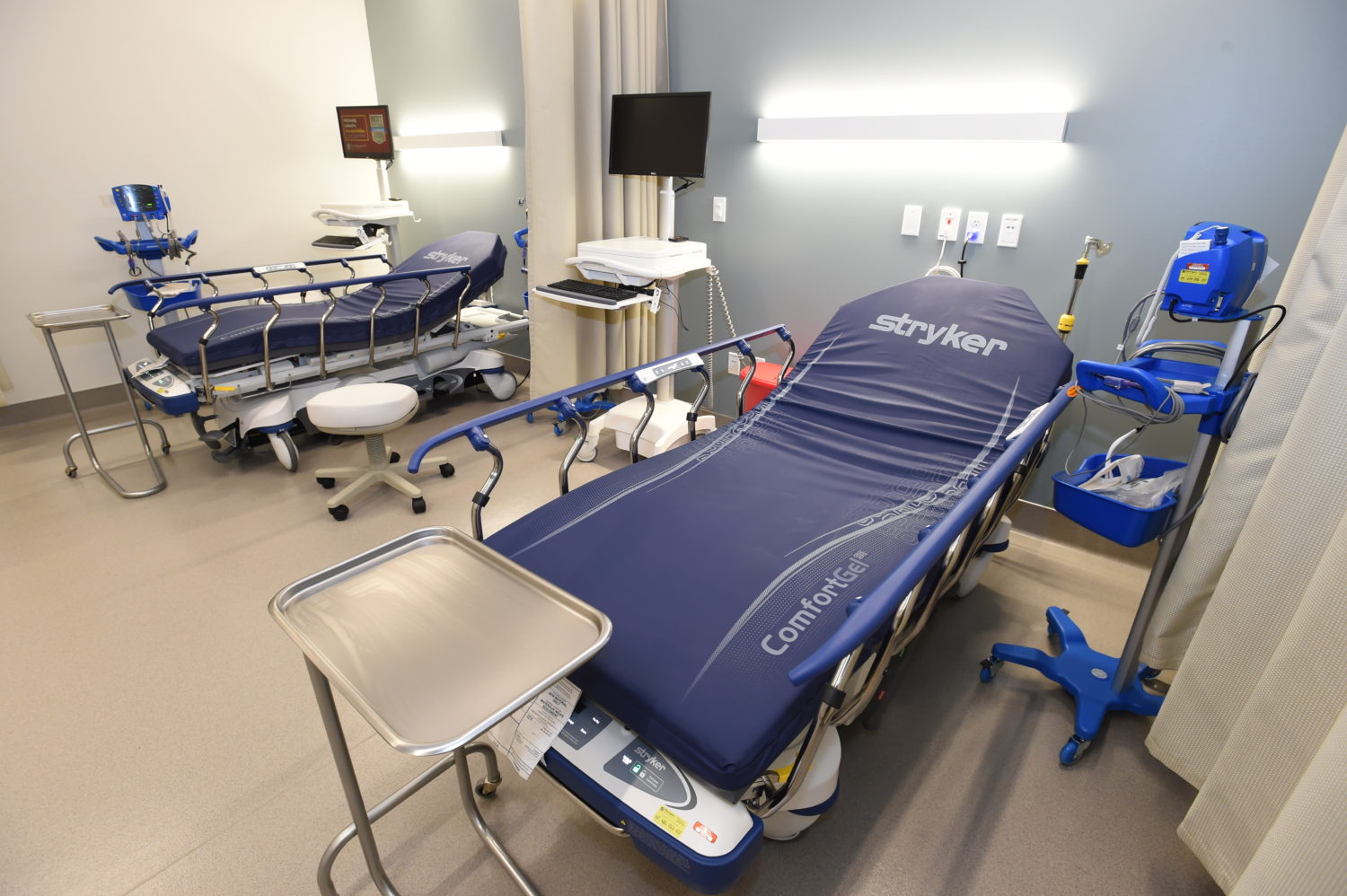 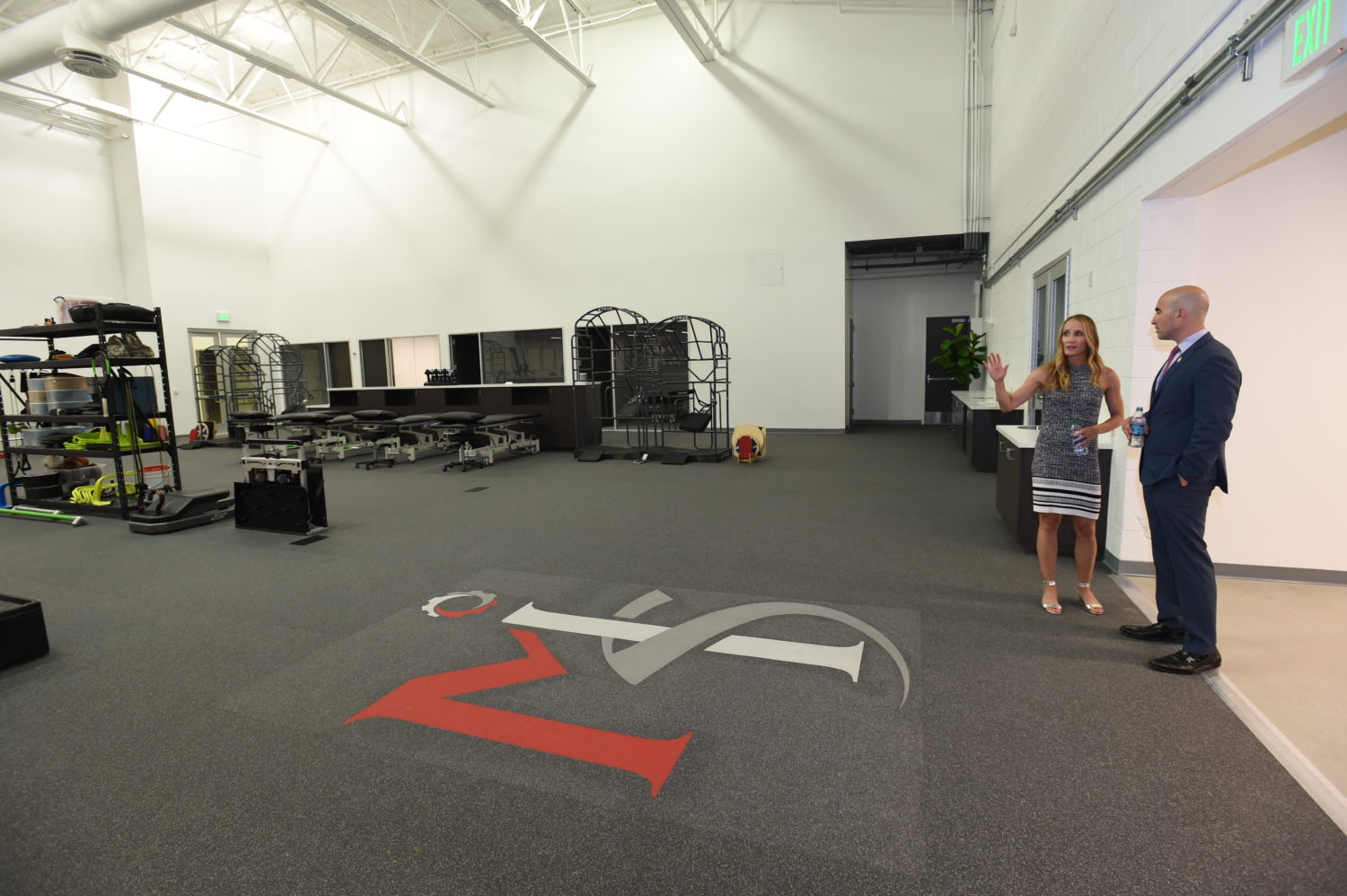 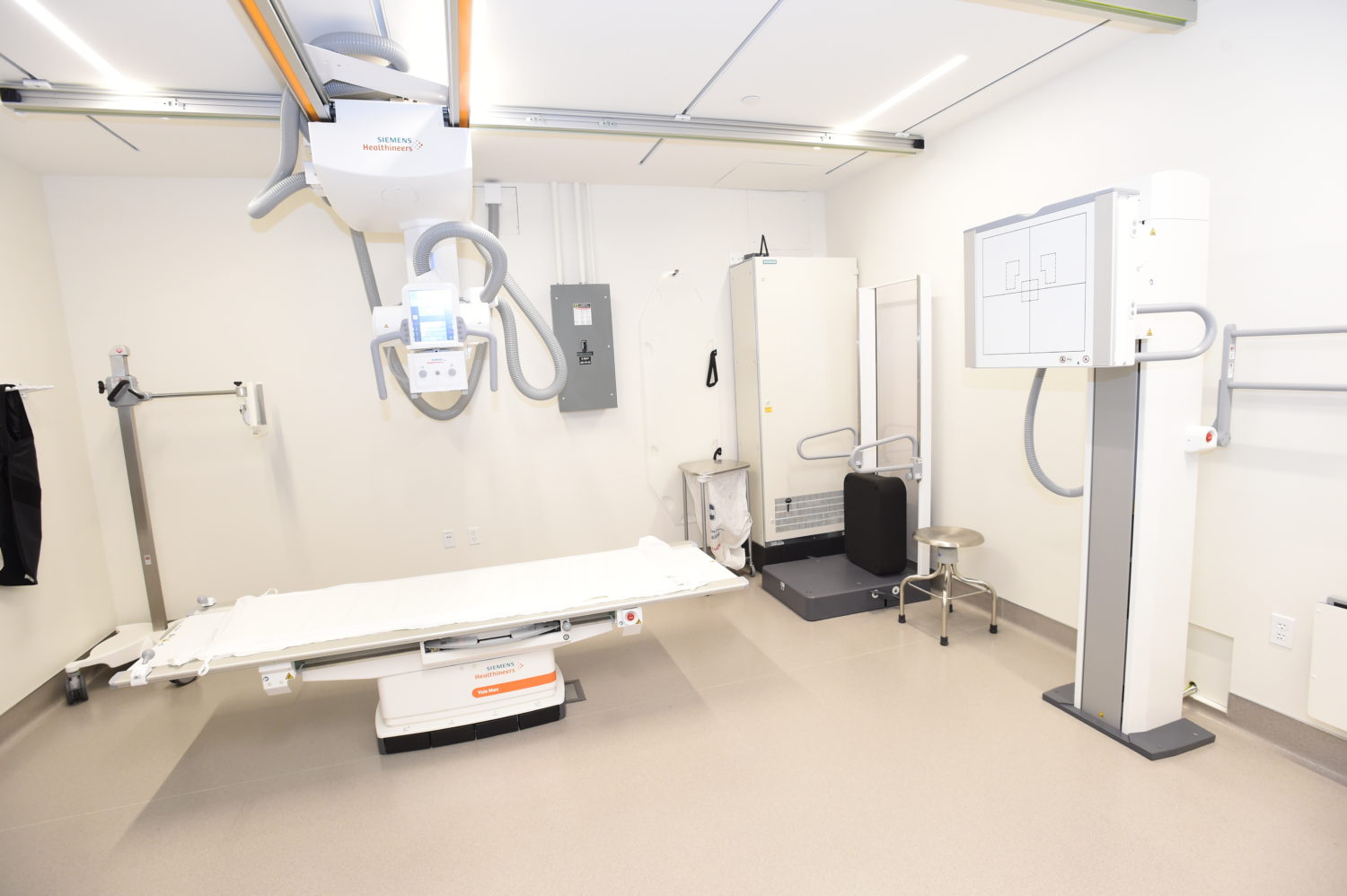 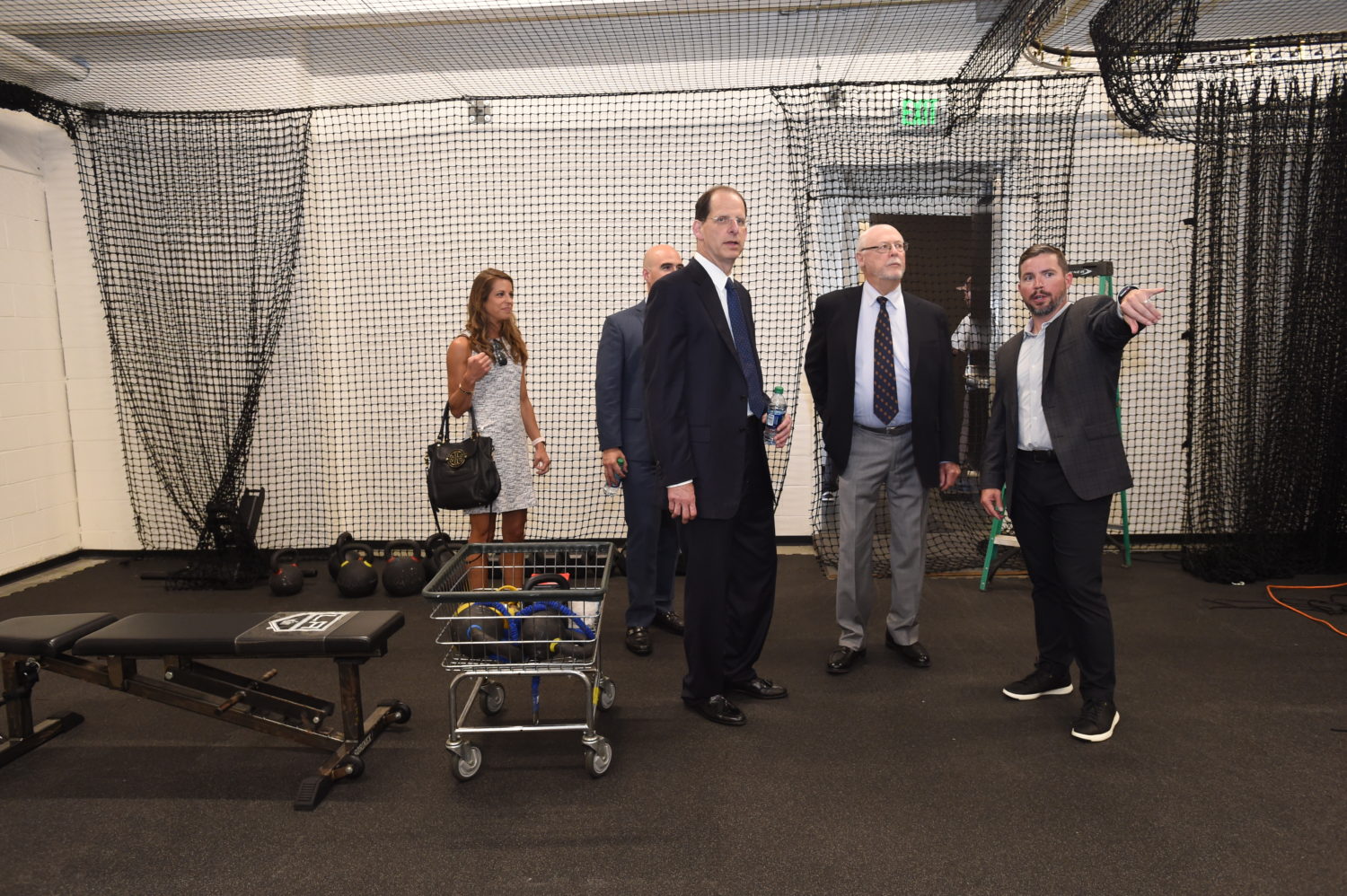 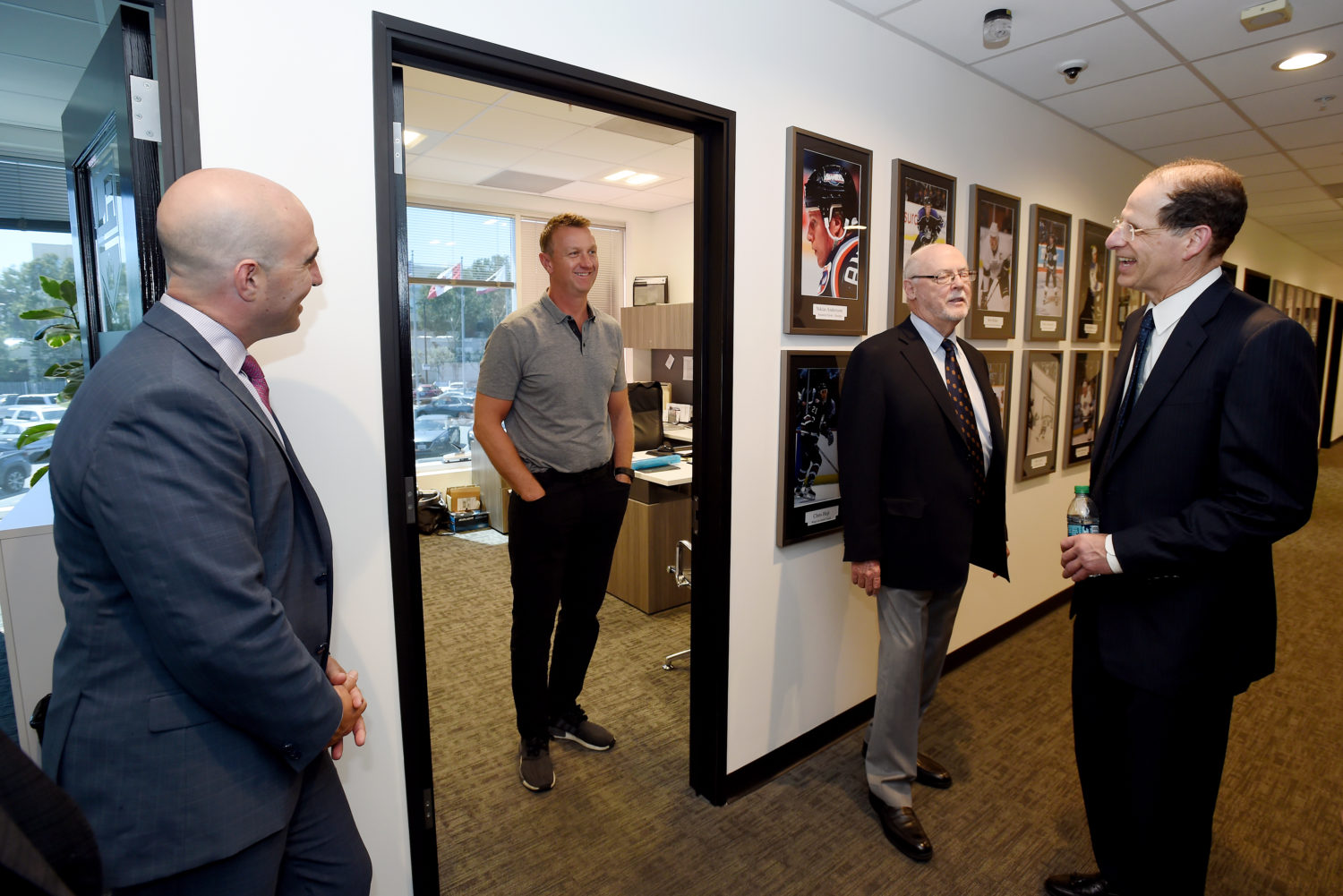 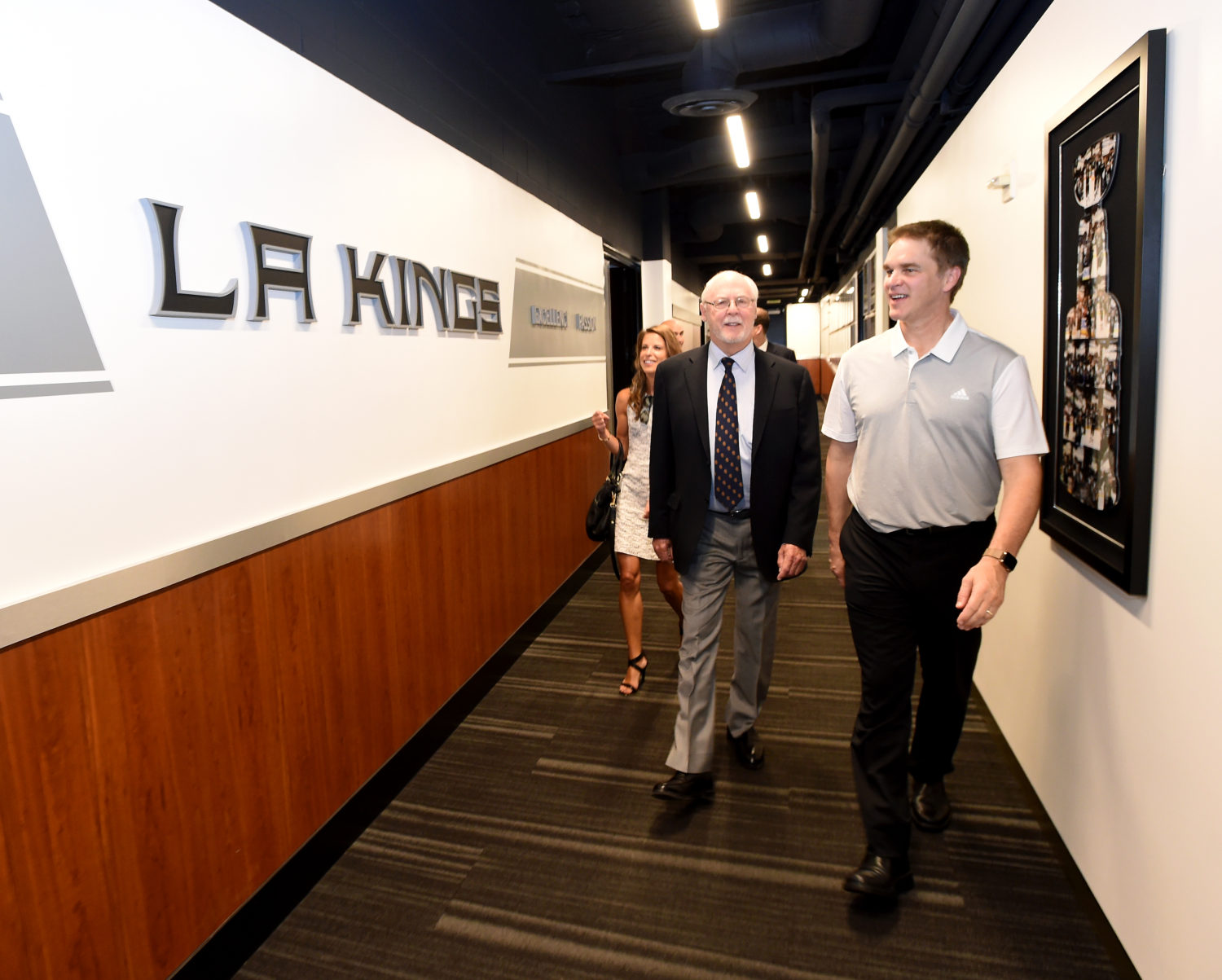 The new businesses, which will be open to the public, are in the areas of the Toyota Sports Performance Center previously occupied by the Los Angeles Lakers.

“As we set out for a new vision at our facility, our goal was to create the premier sports science operation. It was imperative to support our teams here with the Kings and AEG with the best in the world,” Kings Sports Chief Operating Officer Kelly Cheeseman said.

“We also strive to best serve the community stakeholders in the South Bay here at the Toyota Sports Performance Center. With our new partners from Keck Medicine of USC and the Meyer Institute of Sport we certainly have achieved that. We are very proud to welcome them into our home and look forward to the years ahead together as partners,” Cheeseman said.

“We are thrilled to extend our services to the LA Kings, as well as members of the South Bay Community,” Dr. Jay R. Lieberman said.

“The clinic location in the Toyota Sports Performance Center offers convenient access to our highly regarded faculty, who are committed to providing the best possible care to athletes of all levels,” Dr. Lieberman said.

“We are excited to relocate to the Toyota Sports Performance Center. We look forward to serving the Kings, other professional athletes and the community,” President and CEO of the Meyer Institute of Sport Dr. John Meyer said.

“We are proud to welcome Keck Medicine of USC and Meyer Institute of Sport to TSPC. They are world class operators who will play an integral role in our mission to develop innovative programming, services and partnerships which continuously enhance the experience of our customers,” said Brad Berman, President of American Sports Entertainment Company (ASEC), the operators of the facility.

Keck Medicine of USC orthopaedic physicians are the official orthopaedic medical services provider of the Kings and USC Intercollegiate Athletics. Experts from the USC Epstein Family Center for Sports Medicine at Keck Medicine provide advanced treatment options for athletes at all levels at multiple locations throughout Greater Los Angeles.

At the newest clinic located at the Toyota Sports Performance Center, physicians will treat the LA Kings, Junior Kings, LA Lions and other local youth sports teams in the community including participants of the LA Kings High School Hockey League.

In addition, the facility will be open to the public to serve all stakeholders, from adults to the youth sports, as well as members of the El Segundo and neighboring communities. The clinic will conveniently offer extended hours and provide urgent orthopedic care.

Also, as Keck Medicine announced on August 5, Dr. Frank Petrigliano has been named Chief of the USC Epstein Family Center for Sports Medicine at Keck Medicine and Head Team Physician for the Kings.
The Meyer Institute of Sport is led by Dr. Meyer, who is set to begin his third season as the Director of Player Health and Performance for the Kings.

As a clinician, Dr. Meyer has practiced in the Los Angeles community for more than 20 years, specializing in biomechanical movement analysis and its relationship with orthopaedic and sports injuries.

Dr. Meyer has recently completed 14 years of service for the Department of Athletic Medicine at the University of Southern California, most recently as the associate athletic director of sports science and performance.

His interests in spinal disorders, and upper and lower extremity injuries, have led him to serve as an Adjunct Assistant Professor of Clinical Physical Therapy at the University of Southern California in the Departments of Biokinesiology and Physical Therapy.

When the Lakers departed the Toyota Sports Performance Center in August of 2017, the process to re-create the approximate 35,000-square foot space began. The Kings executive offices were revamped, and at the start of this year the LA Kings Off-Ice Training Center opened in partnership with HockeyShot. Keck Medicine of USC will consist of 3,450-square feet and Meyer Institute of Sport will consist of 13,700-square feet.

The Toyota Sports Performance Center is operated by American Sports Entertainment Company (ASEC). Founded in 2006, ASEC is the largest owner/operator of ice skating and indoor sports facilities in the United States.