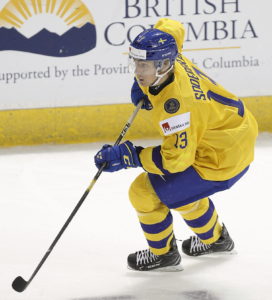 August! A time to unwind, take stock, to look reflectively towards a sunset amidst summer’s fading twilight. It is also a slower time when the news that Johan Södergran will play in North America rather than Sweden this season requires its own stand-alone story atop the page.

Södergran, a 6-foot-2, 205-pound power forward, had been ticketed for SHL-Linköping in 2019-20, where he’d fulfill the final year of his contract before making the jump to North America. The plan has changed, and that would appear to be good news for Ontario Reign fans interested in keeping close tabs on the 2018 sixth round pick who has been a clear standout during his two appearances at development camp. This was first reported by Sixten Funqvist of Vimmerby Tidning, passed along by Finland-based LAKI user Use, and confirmed by hockey operations.

“I always dreamed about playing here in the U.S., so when we talked about the contract [earlier this summer], I felt like it was the right thing to do, to sign,” Södergran said at development camp about signing his entry-level contract. “I don’t know if I’m going to get this chance again. There was no doubt about it.”

If you’re checking this site in August, you’re probably pretty aware of Södergran by now. (Click here for a large archive of Linköping video interviews.) He’s got good size, he’s strong on the puck and is known for protecting it well even when reaching away from his body. His power game allows him to drive amidst resistance to the net, where he’s good at getting sticks on loose pucks and capitalizing on secondary opportunities. He profiles as a power forward capable of finding both the hard and soft areas who showed off a crisp wristshot several times at development camp in addition to getting his touches around the net.

He’s also still a teenager. Södergran, who got off to a torrid start and ended the season with eight goals and 13 points in 42 SHL games last season, turns 20 on November 20, so he’ll enter the year among the youngest players in the AHL. He’ll compete for an NHL job, of course, but even in the interview with Funqvist he essentially acknowledged that he’s not exactly penciled in for a role on the Kings as someone with a late birthday taking part in his first North American training camp. There’s ample work to address and Södergran is by no means a sure thing, but rather an interesting member of a young but emerging Los Angeles prospect group that continues to draw notice.

Along with 2019 draft picks Samuel Fagemo – a teammate at world juniors and a player Södergran knew well before he was drafted by the Kings this summer – and Tobias Björnfot, Södergran was one of three Swedish prospects to sign with the Kings this off-season. “[Samuel is] a really nice person outside [of hockey] and really good at hockey. Tobias, I’ve talked to him some times,” Södergran said. “I’ve always known that they’re really good players and good people, too.”

Fagemo will play for Frolunda in 2019-20 – though he will still attend training camp, per John Hoven of Mayor’s Manor – while a check-in on Björnfot last month revealed that the defenseman’s 2019-20 club is “still undecided.” By signing him to an ELC, the team retains the ability to dictate where he goes – though as of last month SHL-Djurgårdens was still the most probable destination.

“Wanted him here for camp and to control the situation. One of the reasons we signed him,” General Manager Rob Blake shared via email at the time.

Considering Södergran was a player who had been held scoreless in 21 SHL games when Los Angeles chose him at the 2018 NHL Draft, that he was a world juniors selection and will make the jump to the AHL within 16 months of getting drafted represents encouraging returns from the 165th overall pick.

And, because using Google Translate on hockey stories will never stop being fun, here’s the bastardized transcript of Funqvist’s report and interview:

Soon, the adventure really begins
After a successful season in SHL, Johan Södergran is a pro in North America this fall. Whether it becomes AHL or NHL remains to be seen. – Kings have said they want a change in the team, he says.

Johan Södergran is no longer an LHC player. This fall, the 19-year-old will play in North America for the Los Angeles King’s organization. Kings is in a generational exchange and since they drafted Södergran last summer, the parties have had close contact – a contact that intensified significantly during the spring.

– After JVM it became more concrete and they wanted me over. It got a little hard, it got a little much in the skull then, he explains when we see you. I wanted to tell you, but at the same time I wanted to focus on the season.

Södergran was at various development camps already last summer and already then you could see that Kings liked what they saw. From California came reports of how the then 18-year-old forward impressed in his physical play along the sidelines and in front of goals.

– They are happy with that. It will be a big factor over there and they are focusing a lot on development camps. There is a lot about how to cover the puck properly, how to get out of the coffin and into the finish. How to challenge correctly and get off the slopes in front of goal. “If you want to take a seat here, you have to be good at the coffins,” they said.

He says that during JVM he noticed the difference in playing on the smaller, North American rink.

– I had less time. It goes much straighter on target. A lot of it is about knowing what to do with the puck before you get it.

Contact during the past season was close. There was little surprise about his development:

– I got regular advice. Much of the contact was with Niklas Andersson, the European scout. But also Mike O’Connell (development manager) and Nelson Emerson (player director).

– They had lots of stuff with what I did. Some of it was what I did worse and then it is not directly “You are wrong”, it is very detailed.

Johan Södergran has been over to Los Angeles once this summer and before he left for that time a meeting was held where representatives from the club and some young players – not all – were present.

– Kings have said they want a change in the team and that they want younger players and that now is a golden opportunity. “Now it’s up to you,” in principle, he says.

But he keeps his feet on the ground: – Realistically, it will be AHL for me.

– No, then it will be AHL, he says emphatically.

The AHL team Ontario Reign also plays their matches in Los Angeles where Ontario is a neighborhood. For this season, Reign has a dressing room next door with Kings and thus lives in the same arena. If all goes well, he will not be the only Swedish in the team. Samuel Fagemo is also going to California, but also the Finnish talent Rasmus Kupari, whom Kings drafted in the first round last summer.

– Fagemo and I are pretty good friends. We hung out together a lot during the World Cup, it was fun. And it would have been nice to have someone to split the rent with, haha!

– You have to choose whether you want to live with someone or not. Therefore, it would have been fun if someone you knew came over.

On August 11, he next raises California. A five-day shooting camp awaits. However, Södergran is not entirely sure what it means:

– I haven’t received very much information about it. I think a lot is about technology. That’s me and Rasmus Kupari and then there are some NHL players there, we are six in total. Most forwards. It will be fine.

– But they have said that they want me to come over and it is clear that I am going then.

After that, it will be a few weeks at home in Sweden again before everything gets going really well. In early September, the team’s rookie camp begins. From the start of the success of last year’s SHL, Johan Södergran has been fast. In the fall, he plays in North America. Whether it will be NHL or not remains to be seen. It’s up to him, as Kings himself put it. 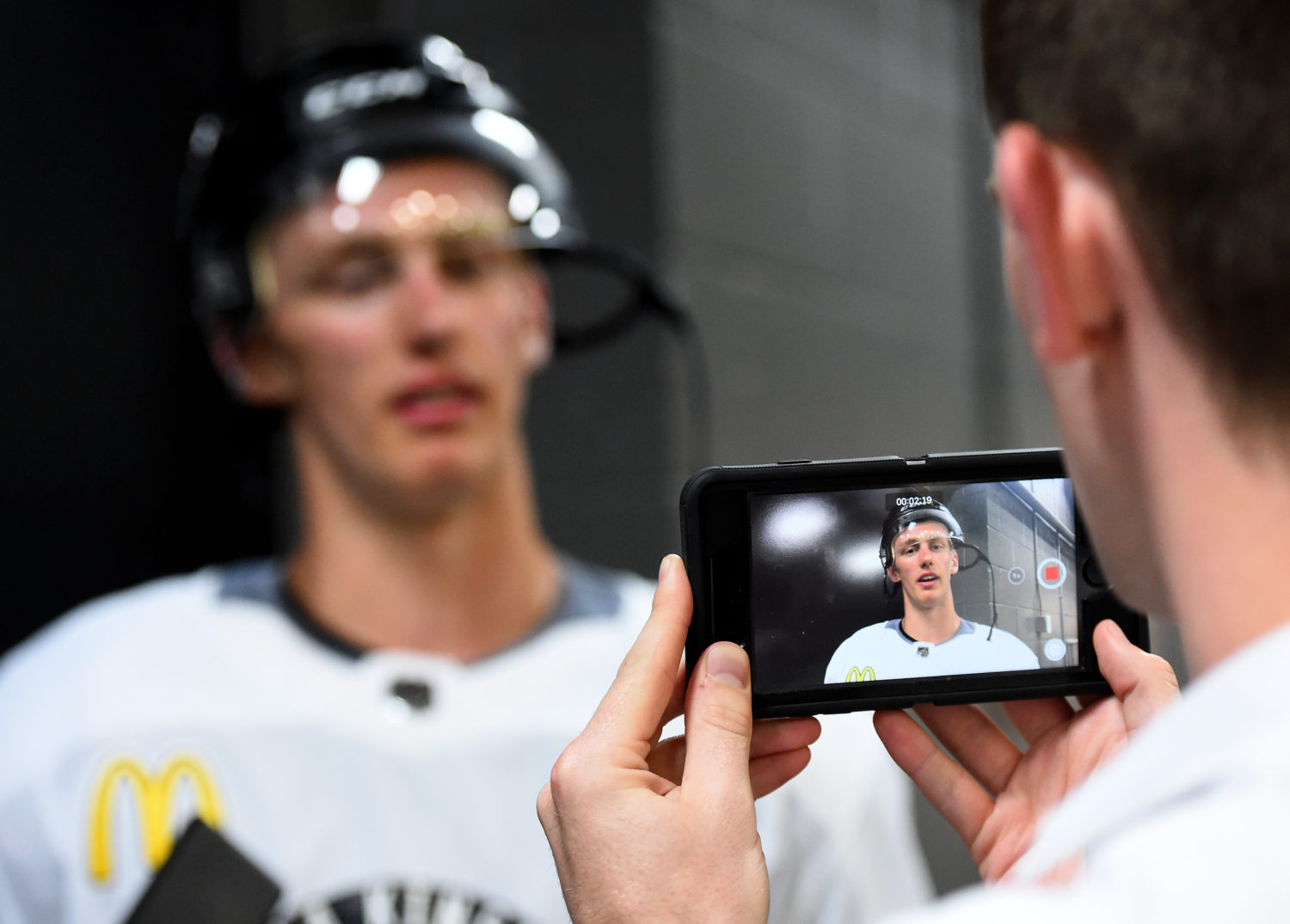