Kings encouraged by Kaliyev at WJSS; how the Hlinka restarts the scouting season - LA Kings Insider

Kings encouraged by Kaliyev at WJSS; how the Hlinka restarts the scouting season

Just as it is for players in their draft and world junior years, there really isn’t much of an off-season for the scouts or hockey operations executives, no matter how dark the dregs of August may get. European-based scouts covered national U-20 games in Finland one month after June’s Draft, and the past week has offered a pair of international tournaments widely covered and scouted by NHL teams.

Director of Player Personnel Nelson Emerson was at both of those tournaments – this week’s Hlinka Gretzky Cup (formerly the Ivan Hlinka Memorial Tournament) in Piešťany, Slovakia and Břeclav, Czech Republic, and last week’s World Junior Summer Showcase in Plymouth, Michigan. It was at the WJCC where the Kings had an NHL-high seven prospects and would’ve had an eighth if Finland found it necessary to call on Rasmus Kupari, a veteran of the previous two World Junior Championships.

The Hlinka tournament is chronologically the first tournament on the calendar for players entering their draft year, and it was at last year’s tournament in Alberta that Vasili Podkolzin (and 2020 top prospect Alexis Lafrenière) erupted offensively and fellow high picks Kirby Dach, Ryan Suzuki and Arthur Kaliyev made similarly productive statements.

“You put a name with the number or get a good indication of the player and then you can go into the season knowing who the kid is and just gets you more familiar with them,” Emerson said of how the Hlinka serves as a scouting reset heading into the next season.

But I also wanted to learn more about the Kings prospects at last week’s WJSS, the stats and details of which are below. Kaliyev led all Kings at the tournament with five points, showing that his game was at a good place one month after development camp.

“I think that’s people saw there or what you see with him in the OHL is what he is and he’s a goal scorer. The puck finds him around the net. He’s in the right spot on rebounds. He’s got a good stick. He’s got a good shot,” Emerson said. “One of the exciting things for us, and we had a number of our scouts there and we’re all watching him, is the pace of skating was fine. He was keeping up with the high pace. That was another exciting factor and fundamental that we were really happy with.”

More from Emerson in a Q-and-A with LA Kings Insider:

LA Kings Insider: For all these young kids, the Plymouth tournament is their first real public showing after they’ve been drafted. Is there anything specific that you’re looking for in a player in his first international event after he was drafted and attended his first development camp?

Nelson Emerson: A couple things. I think the first thing you’ve got to note is, Jeez, they have these tournaments and it’s a big deal and it’s in the middle of summer. It’s summertime hockey. And what’s crazy is when you go into the rink and all of the sudden it’s Canada–U.S. or Sweden–Finland, it’s serious. These kids, they’re not playing summer hockey. They’re playing for real. And they’re competing and they’re working and skating. And it is. It’s an evaluation. These kids are trying to make the world junior team come next Christmas. So, it’s for real. I don’t know if it’s good or bad for hockey that they’re having this in the middle of the season. There’s no offseason for these young kids to train and grow as players and all that, but after I say that, what we’re looking for and what we saw and what you’re trying to see is you draft a young kid at 17, he’s already 17 when we drafted him. He’s so young. What you’re looking for is what you saw when he was with his club team – if it translates into a bigger time type hockey. That’s how and then you start evaluating from there.

With Artie (Arthur Kaliyev), what you’re looking for is, number one, we drafted him because he can score. Is he going to be able to do that? Is he going to get opportunities, and obviously what we saw, he had some great success at this event, so yeah, he checked that box. But a couple of the other boxes — we know he’s got a lot of work ahead of him in the next few years with the compete and skating and work ethic and playing a faster-paced-type of hockey that we see in the NHL. And we saw actually a good indication that that’s going to happen. So, you’ve got a lot of work to do in the coming years. You’ve got to get stronger, you’ve got to get the leg strength, you’ve got to grow. Jeez, he’s so young. But if he matures, and it looks like he will, we’re pretty excited about what we’ve got there.

LAKI: Trying not to stray too much towards the individual guys, but we’ve got to talk some Alex Turcotte here. He skates with Cole Caufield again, and it looks like this is a player who could potentially be penciled into a top center role even as an underager this year. There’s no reason asking about his character — you see it and experience it everywhere you go – but in that kind of tournament, it’s his first time skating with the USA jersey again since the draft, what was it about his all around game and how he plans on using this college season ahead of him and almost certainly a world juniors season to forge that next step in his career?

NE: You know what’s really neat, Jon, is when you see how players are treated by their coaches. And you can see right away what a coach thinks of a player. Where he pencils him in, what line he puts him on, is he out there at the end of periods and things like that. So, a lot of our guys that were in that tournament, I was thinking, ‘man, these coaches are pulling for these kids to set out a great camp here … because they’re putting them in great situations.’ So, Turcotte is a kid like that. Obviously, the U.S. program thinks very highly of him and I think it’s because of his all-around and everything he does as a player. It’s his off-ice stuff, it’s on-ice, it’s how he acts around the locker room or around his players, he’s so competitive but he’s such a good teammate. That box gets checked right away and then he goes on the ice and the thing about him – and I sat with Tony Granato during the game – we’re just looking at how competitive he is every shift. There’s really never a drop off from shift to shift, so he’s coming at you in waves. Every time he goes on the ice, he’s kind of playing the same way. There’s no taking a couple shifts off in the game or having a period off, it’s kind of the same stuff, and he’s relentless and I think that’s how he plays with Caufield – he does a lot of the work and was able to do a lot of things whether it’s skating or passing. He can make plays and he played the power play. All the little things and then he does the same thing in his own end. So, he’s beyond his years in maturity and I think that’s the reason why the coaches love him and obviously one of the reasons why we picked him so high. 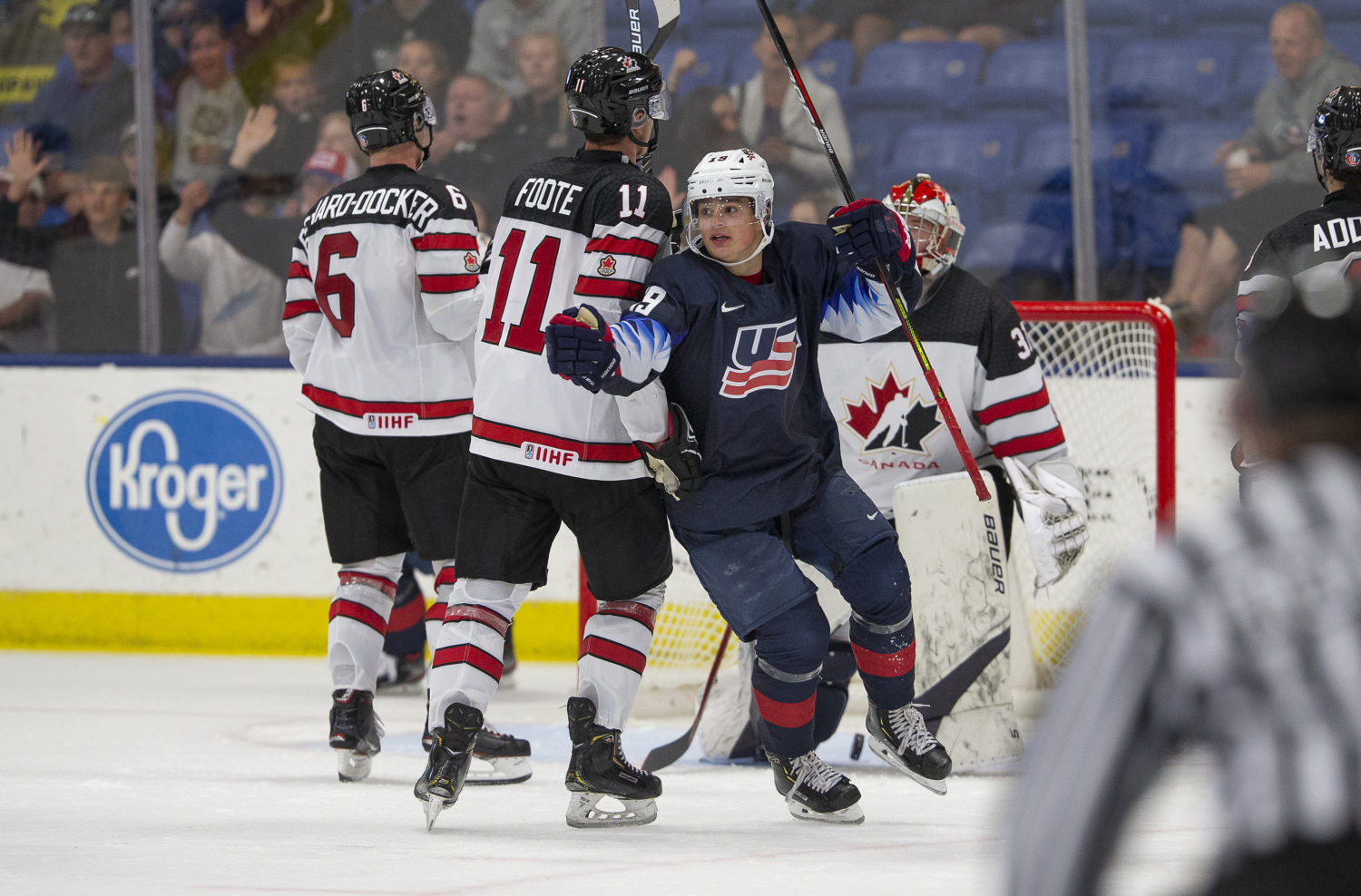 LAKI: With the Hlinka tournament, how does the staff reset? The scouts do their job, the draft takes place, and then after not too long there are a few European events and camps over the summer. How do you refocus? What are those start-of-the-year meetings like? Is there a syllabus for how the team plans to attack scouting for the 2020 NHL draft?

NE: Obviously Yank is a good one to talk to for that. He does a terrific job with putting together his curriculum and his expectations for scouts. His track record shows that, but after the draft they’re wiped out just from the long season and the preparation going into who you’re going to pick all the different scenarios in a draft, right? They’re tired, so these guys need time off. And they do get that for five weeks, six weeks, but then all of the sudden we have four to six guys at the Plymouth tournament watching and I was there too, but we had our scouts there. And then again we have I think five, six guys at Hlinka. So, they need that time off, but how they do it is they go in and they have their list right now as who might be on it for the coming season. And they have certain guys, ranks and ratings, and they just do it. It’s not set in stone right now. It’s all just names and just kind of prospects – if there’s an A or B or C prospect, that type of thing. You kind of just go and you take a look and it just helps you get organized for the season. And I think that’s how Mark has it. And the [scouts] that go to the Hlinka [may say], ‘hey, this guy is in that spot now, we’ll have to keep an eye on him.’ Or, ‘this guy is a mid-level prospect, but maybe he’s got a chance to move up, so he’s in this area.’ Then you’ve got the C-level guys that are there, but hey, some of those Cs can move to As. That’s what’s crazy about it. Like a guy like Jackson LaCombe last year. He’s a good example. It was Anaheim’s pick and the way he played in Hlinka last year and then all of the sudden he becomes a high pick in the draft eight months later. So, things change so much. That’s what’s crazy. But Yank is so organized with all of that and we kind of allow him to do that and he does a good job.

I had the chance to watch some great ⁦@usahockey⁩ the last two days at the World Junior showcase with legendary stick handling coach Real Turcotte and ⁦@HockeyHallFame⁩ er and ⁦@LAKings⁩ great Luc Robitaille. pic.twitter.com/ziVExWzE6c

There were some interesting bits from The Athletic’s always great Corey Pronman ($), who sat down for a Q&A with Sweden head coach Tomas Monten on the potential make-up of the world junior team. Stay for the notes on Samuel Fagemo, who Monten referenced as a player he’d be excited about as a top forward at this year’s tournament, as well as Tobias Bjornfot, who isn’t flashy but profiles as “a modern defenseman and the kind of defenseman that will make your team better.”

More from Pronman on WJCC standouts:

Philip Broberg, D, Edmonton/Tobias Bjornfot, D, Los Angeles
The Broberg-Bjornfot pair came together toward the second half of the tournament and was excellent. Broberg was arguably the best defenseman at the camp, making a ton of plays with his skating and skill particularly off the rush. His first game he had a rough couple of turnovers in bad spots, but the rest of the way his play was very strong. Bjornfot was his typical not flashy self, but with his great skating and brain he made stops and enough offensive plays to help drive play. This could be a possible pairing at the tournament in December. 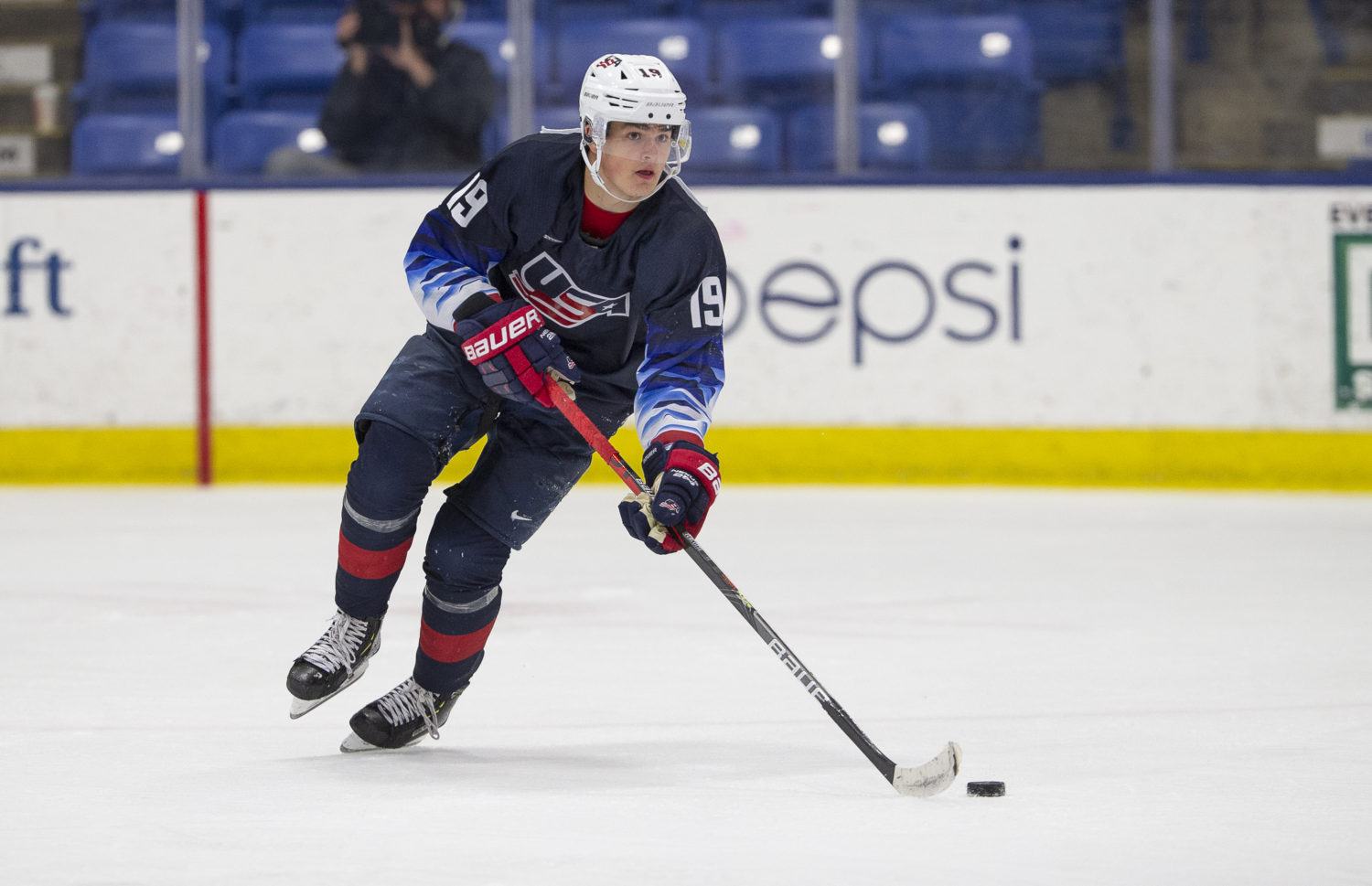 That's a whole lot of guys that can shoot the puck spread out over both units.

Arthur Kaliyev brings Team USA to within two with a PP tally late in the sandwich stanza. A great feed from Trevor Zegras and the blistering one-timer from Kaliyev. #WJSS #LAKings #LetsGoDucks #NTDP pic.twitter.com/YjiVq5k5CT 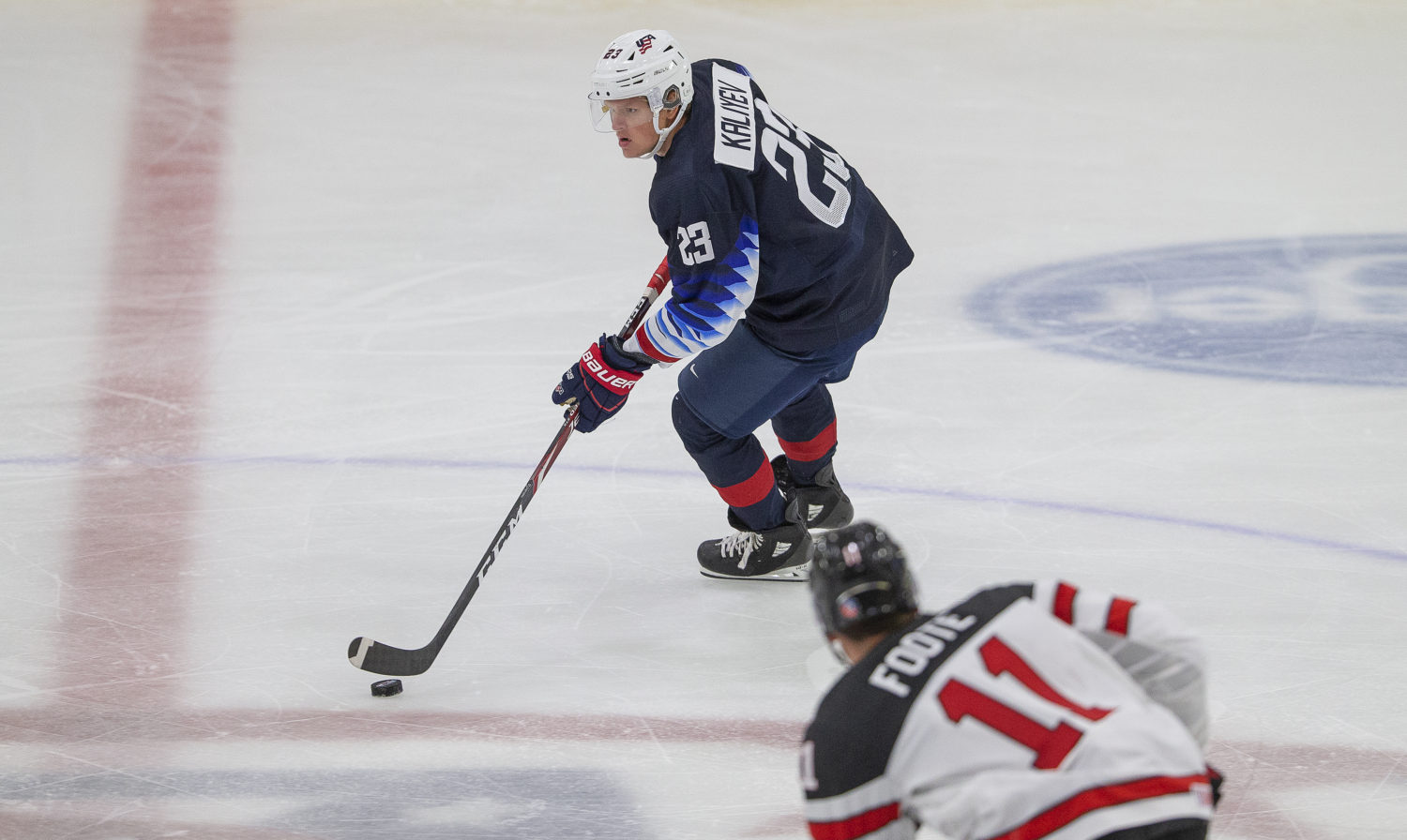