Barring someone falling, Kings have their guy; final Q&A with Yannetti

In the final story before the – my goodness, here we are! – NHL Draft starts at 5:00 p.m., Director of Amateur Scouting Mark Yannetti joined LA Kings Insider from the team hotel Friday to share some final thoughts before players start falling off the board. It’s an interesting conversation – one interrupted early on by a friendly passerby in Todd McLellan, who drew laughs by encouraging Daryl Evans and I to “go easy on him.”

Placed within the context of our conversation of a month ago, it’s another fascinating glimpse into the way the scouting staff and front office processes information and prepares for the draft. It’s also a revelatory discussion in which Yannetti shares that the Kings have their guy – barring someone falling from above, of course – and didn’t finalize that decision until arriving in Vancouver. | VIDEO: Daryl Evans and Mark Yannetti

LA Kings Insider: So, in the final hours before the draft, what are the loose odds and ends that you and the front office are wrapping up right now?

Mark Yannetti: Actually, we were finalizing our pick up until today. This might be the first time that we’ve actually — I think we usually come into the draft with the pick finalized, so this would be similar to the Doughty draft. In terms of that, in retrospect, we came into the Doughty draft knowing it was Drew and really finding out it was Drew after that sit down with the family and then watching the combine. So, it was probably between our final meetings and now. This one, we were really, really deadlocked between two players and almost split evenly down party lines. So, it took probably, from between the time the meetings ended until now, I’ll bet you we put in 100 hours’ worth of work, 150 hours’ worth of work on these guys, and a lot of it had to be done when we were together, so we spent two full days on finalizing this pick and then solidified it today. So, it might seem last minute, but the work was left to be done here. But it was probably the latest that we’ve finalized something.

LAKI: This’ll be the last and most pointed question I’ll ask about that particular pick, but when you say ‘you have your guy,’ is that barring somebody falling from three or four?

MY: Of course. We have our list from one-to-five. We have the list from one-to-whatever, but in terms of the first pick it only matters from one-to-five. So, we know for a fact, if the draft falls in the worst possible way for us, we get our pick at five. So, if it comes down to two players, it doesn’t come down to Hughes and Kakko – it comes down to three players. One was clearly a three, and then two were four and five, and as I said, it was that deadlocked, and it took a lot of really unique work. We used a full spectrum of subjective, objective, analytic scouting – emotional. The interviews, too, that’s the other thing. I thought the interviews, we did a couple of prolonged interviews. Not quite the Doughty interview, but prolonged interviews and I thought they would be the definitive one and they weren’t. They were so close. And it was cool because they were so opposite. It was really good because different personalities liked different personalities. Like, I won’t say who, but I might have gravitated towards one personality, Rob Blake might have gravitated towards another, Nelson Emerson, Mike Futa, Glen Murray — like, we all found little nuances in the personalities. I think we learned a lot from the process. And it surprised me.

LAKI: Year after year, how do you update your database when it comes to exchanging picks and how does that guide the team’s approach when to decide to move up or down? I know ultimately that’s a Rob Blake decision, but how is it guided by the data that you have?

MY: Rob’s and my approach to trading picks would be drastically different. I don’t mind calculated risk. I don’t think you gamble, and I don’t think you throw things around, but you know what? I’ll tell you, I would never pick where we picked at any draft. Ever. If we have the fifth pick, of the 50th pick, or the 100th pick, I don’t know why you would pick at those picks. You should pick at the 90th pick or the 110th pick. I’ve been fortunate enough in my career to sit down with some people who are extraordinarily successful and intelligent and sat down with Scott Pioli of the Patriots who learned from Belichick and that’s my philosophy, and I learned from them and you take things from different people. I don’t know why you would, if you’re at five, why would you not pick at six and get something else? Why would you not pick at 10 and get something else? Now, okay, now you get Rob coming in and you say, ‘Because you’re craz’.” Right? You know, because you can’t do that. Because at five, we have a guy who’s going to help change the team. Mike [Futa] used to measure me that way. Mike and I balanced each other really well because I want to go out and do that. You know what, why are we going into the draft with ten picks when we could have 15? When we could have 17? And Mike was very good at listening to me, letting me tire myself out and then you saw it. We moved quite a bit early on, but again, it comes to a point where there is a guy in this draft who can change the direction of the Kings at five and we can start that rebuild of the culture. We can start that rebuild of stockpiling the talent. Not picking in the first round and picking at 29 or picking at 20 — you don’t get a chance to affect that, and when you haven’t had the fifth pick in a long time, maybe you shouldn’t trade the fifth pick back, right? So again, I appreciate the patience he shows when he listens to me go off on my tangents. And he does. He listens and he’s thoughtful about it and it’s great that I know that he’s listening to me and then he’s saying, ‘this is how we’re going to change the franchise and we’re going to pick at five.’ And he says, “because A, B, and C,” and it makes perfect sense. But again, we have ascribed values for each pick. Pick one is not worth 100, pick two 99, 98, it doesn’t go like that. It’s an exponential curve. And I won’t give our numbers away, but just because pick one is worth 100, and I’m not saying that’s the numbers, it doesn’t mean pick two might be worth 50. You might have picks 42 to 72 all worth the same, based on historical numbers, based on tendencies. Jeff Solomon and I have created and used other people to do that and now you have a full-time guy like Rob Vollman who tweaks it and says, ‘this formula works a little bit better.’ So each year our draft value, our allotted slot, will change a little bit. It’s a little different this year than the year before. I would assume the next year it’ll be a little bit different. But in a vacuum, each pick has its own assigned number. Then you have to get out of the vacuum and do some real world stuff, too. You can’t just be cold, hard numbers and analytics. But yeah, we don’t even have a player there, we have a number there.

LAKI: You say you have your guy at five. But with the 22nd pick, how many different scripts and scenarios do you have there? Are you at all able to essentially say ‘it’s going to be one of these four or five guys?”

MY: It’s like Kupari last year. Kupari is one of the guys we thought would be there at 20. It wasn’t a certainty. We had five players we thought could be there at 20. Two were unrealistic, but not infinitesimal, and they both went. And then, three were really realistic. One of ‘em went and Kupari and one other guy who was actually the next guy after Kupari on our list, they both were there. So, at the end of it, we got one of the guys we wanted, one of the guys we thought would be there, and there was one remaining guy should Kupari have gone. So, I would say, I think there’s going to be four guys there, and we have two players targeted, that we think. One of those two players I think will be there.

LAKI: One final question – with that 33rd pick, having the second pick of the second day opens up other possibilities. That’s a commodity, that pick. Is there any unique other approach towards that pick, which has been in the realm of certain other picks the team had last decade, as well?

MY: It’s the one thing with Rob and I were talking, it’s the one pick you don’t have to plan for, because at 33 you sit there and wait. The draft unfolds and every single year we see it. Every single year there’s five teams picking, saying, ‘oh my God, how did this guy fall out of the first?’ So, there’ll be two guys that 30 teams in the league are saying, “How did that happen?” So, there’ll be 15 teams in the league trying to get 32. I’ve said it before, I don’t know to who, but we tried to get the Islanders pick, 31, to try and draft Ryan O’Reilly, and we made seven different offers. At one time it included five or six different draft picks – and we couldn’t get the pick. So, it’s a pick that everyone wants, but it’s also a hard pick to get. We’ll certainly listen to any offers that include five picks in case anyone’s reading this. You have to plan for movement in every round except if you’re picking 32, 33, 34. If you’re that, it’s the only time where you sit, you evaluate what happened in the draft and you sit in the room and you wait for the phone calls to come in. 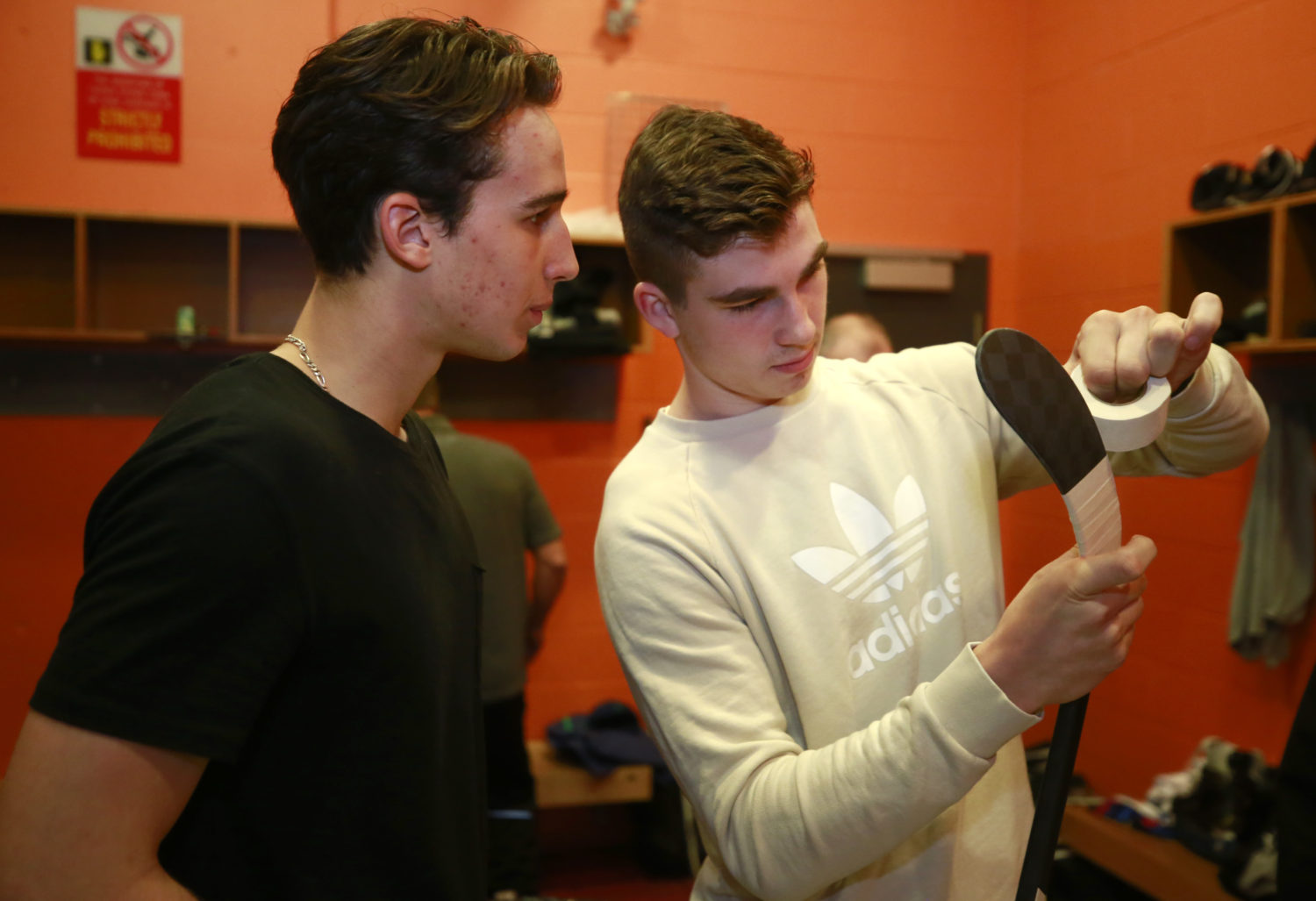