Several themes resonated in today’s media availability, and two abstracts – accountability and entitlement – were inherent in Rob Blake’s explanation of how the Kings reached this current point and the means in which he intends for his off-season plan to be executed.

One important waypoint to an April 8 locker cleanout day was February 27, the day the team returned home from a road trip shortly after the trade deadline. In their return to Toyota Sports Center after that trip, Blake met with a large group of team veterans and the leadership committee to communicate a philosophy that had evolved midway through the season and necessitated the swap of important veterans and role players for draft picks and younger assets.

“It was a tough meeting to have,” Blake said. “For me, the entitlement aspect has to disappear. We’re past the point of the championship teams. We’re gone. We’ve got to build something different. We have to restructure our roster, we all have to be on the same page, but you have to want to get better every day, and if you’re not, it’s not going to work.”

As for accountability, Blake owned the difficult position he put Willie Desjardins in and repeatedly held himself to task for not adequately communicating his plan before and after a mid-season recalibration of the team’s ability to effectively reach its goals in 2018-19.

“I didn’t do a good job of that this year at all. I put Willie in a tough spot,” he said. “When I look at it now, was he able to have success in that? Probably not. He came in on a team that I wasn’t sure was ready to buy-in and play hard enough to win again, so I made a change early. I saw it through camp. I felt it through camp. It wasn’t something that just crept in. I made the change. And these aren’t excuses, but injuries do play a part. You lose two goalies, you lose five or six key veterans at key times – Dustin Brown didn’t start the first 10 games.

“So, then we get to Christmas time and I meet with our hockey ops and everything and I change a direction I was selling in the summer completely. Any moves I was going to make weren’t to add to the team, it was to acquire picks, acquire prospects. The one thing we’ve done the last couple years, we haven’t given up those. But these guys are young. You draft a kid two years ago when he’s 18, he’s not even a pro yet. So, it does take time, I get it. But that message changed coming out of Christmas, coming into the All-Star break. Then we traded good players. Jake Muzzin – heck of a player. So, you take him out of the lineup. Now the head coach has got to try and get buy-in and try to get focus from our players? And then we go on the road and we have the trade deadline, so everybody’s like, ‘OK, who’s getting moved?’ Players are smart. They feel it. Unrestricted guys feel it. So, they get moved. And then we come back after the deadline and now we’re incorporating young players, and it was a really, really tough spot for Willie, and I take 100% responsibility for that. That’s on me. I did not do a good enough job.”

Even in response to a comment about his ownership of these challenges, he responded that “it’s my job to put this in place. I did a bad job.”

In articulating the desire to ensure that veterans are benefiting younger players and collectively working towards that nebulous endeavor to “get better,” he again took accountability while acknowledging that the players owned the onus to improve, as well.

Management expected to ultimately undertake a rebuild – they just believed they’d be able to put it off for another season or two by continuing to rely on a collective core that received tremendous returns from Anze Kopitar, Dustin Brown and Drew Doughty last season. Such levels of production did not foretell of any imminent demise, though a question could also be asked whether the team had placed too much stock in such elevated career rates while building expectations for this season.

“Did it come down pretty quick? Yeah, unfortunately it did,” Blake said. “It was just after Christmas that the harsh reality was that we’ve got to change things because this team right now is not going to win the way it is.”

The increased speed in the modern game hasn’t happened in a vacuum. There are reasons behind the spike in offense and pace rooted in the desire to allow pure skill and ability to blossom.

“We’ve got to be competitive in the way the game is played. Defending is so hard,” Blake said. “Take a look – for the last eight years, they got rid of hooking, got rid of slashing on the hands. Goalie equipment continually gets smaller and narrower, power plays, you start in the offensive zone. Any rule that’s come into play goes towards offense. You start seeing offense take over the defensive structure. That structure still has to be there, but when you defend, it’s so difficult staying on the puck, and it’s hard. Teams are just getting the puck out of the zone. So you want to play with the puck, you want to play offense, you want to be going after the other team. … But you can’t turn your back on the [defensive side]. You can’t cheat for offense, but you can manufacture it, for sure you can. There are different ways. On the power play, why are players continuing doing their forward crossing routes, or why are they doing the drop passing. You have to explain to players. ‘Well, this is why you’re doing it.’ Because you have success. But you also have to run your routes the right way, and you have to run it again because when you get it down the road – there’s a lot that goes into it. Defending’s not fun, not at all.”

Much, much more will come on coaching practices tomorrow, as well as the search for the next Kings coach. One interesting note I took today is that many younger players don’t want to simply be instructed what to do, they want to be told “why” and shown video to back up particular points. This was covered recently by Pro Scout-College Brooks Bertsch, who used video to demonstrate to Blake Lizotte during his recruitment process how he’d be used within Los Angeles’ system.

I’ll have much more on coaching tomorrow as well as some key bullet points, but additional Blake quotes on accountability and communication are below.

Rob Blake, on getting modern players to buy in and communicating with the modern player:
I think the way players are now, they have individual skill [coaches], individual nutritionists, individual strength [coaches]. You have to provide all that as a staff, too, so when they get here they have that. But the buy-in part isn’t so much that you just say, ‘go do this, go get the puck in your own zone, make sure you’re quick up.’ Why do you do it? Put the video to explain it and show the success it has and show the failure if you don’t do it right. But it encompasses a lot more than just saying ‘do it.’ You have to have the players buy-in, but nowadays you have to show them and you have to explain why. [Reporter: Because when you played, you were just told to go do it.] It was different. We didn’t have video, too. I’m dating myself a little bit. I did have video at the end, OK? I’m not that old. Times have changed, and teaching techniques and tactics and bench management and motivation techniques – you’ve got to push boundaries with players to get ‘em to respond, but there are different ways to do it. I’m throwing a lot of stuff on it – it’s hard. These coaches, I’m going to demand a lot from that head coach.

Blake, on the timeline of the rebuild:
It’s hard to put a time on our steps. There are phases, for sure. There’s a phase to the deadline, there’s a phase to the draft, there’s a phase to next year’s deadline. That’s kind of where I’m looking at the timeline. But are there difficult times ahead? Yes, for sure. And when I say that, you draft a player this year at 18 years old, he doesn’t necessarily turn pro until 20 unless he’s playing in the NHL. There’s a time period here, and the last thing you want to do is put young guys in a spot where they’re not able to succeed. They’ve got to be as well prepared and ready to step in, and at times this year I had to put players that weren’t ready to play in the NHL in the lineup, and that made it tough on our coach, and that’s my fault.

Blake, on what he’ll focus on in a comprehensive approach to choose a coach and reinforce stability:
Everything. I have to have a structured coach in there, I have to have a system and a style that I know that our players are going to buy in to. I have to make sure that our staff is on page with veterans and young players getting in there together at the same time – and there’s transition. When I say, ‘difficult times,’ yeah, there are going to be difficult trades, I know it, and I have to have that communication with the players and the coaches so that they execute that plan to the way I want it done. 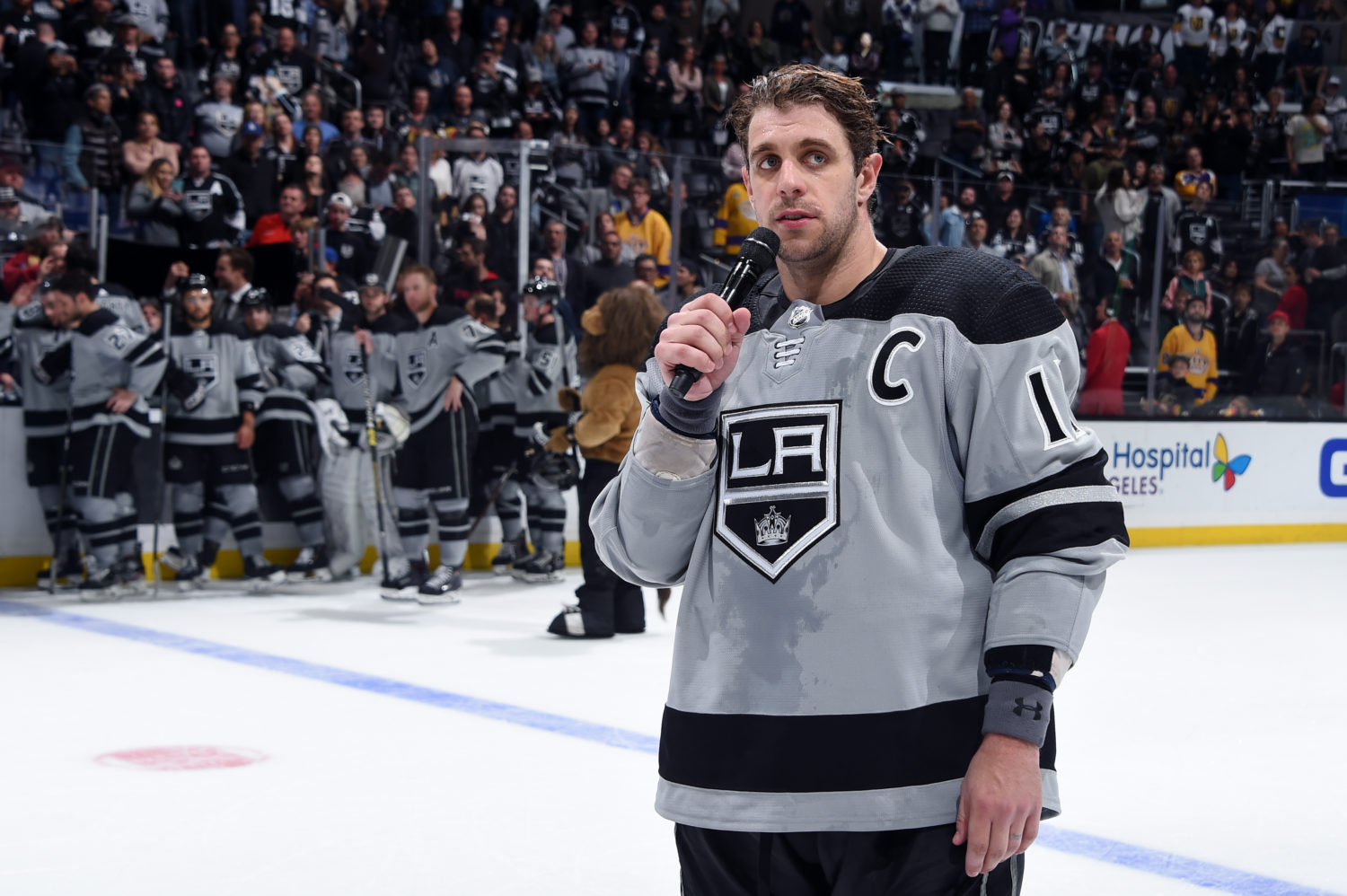