Via the LA Kings official release –

LOS ANGELES – Dustin Brown, already one of the most accomplished players to suit up for the Los Angeles Kings, will pass Dave Taylor and become the Kings all-time franchise leader in regular season games played with 1,112 when he takes the ice against the Vancouver Canucks tomorrow night.

To celebrate this monumental accomplishment, the Kings on April 1 will host a special pre-game ceremony featuring both Brown and Taylor. A special commemorative Dustin Brown poster will also be given away to all Kings fans that night.

Those events in 2003 set in motion a distinguished career highlighted by two Stanley Cup Championships as Brown (as team captain) and his teammates reached unprecedented highs that will be long remembered by all Kings fans in 2012 and 2014. As he closes in on the completion of his 15th season with the Kings, Brown continues to lead both on and off the ice, and his list of accomplishments in a Kings uniform is long and continues to grow.

DUSTIN BROWN CAREER ACCOMPLISHMENTS
• With his next game against Vancouver, Brown will pass Taylor as the Kings all-time regular season games played leader with 1,112. He tied the mark on Tuesday when the Kings played at Edmonton.
• When he plays in tomorrow night’s game, Brown will also move to within only six games of matching Taylor for the most games played, both regular season and postseason, in a Kings uniform. The team record is held by Taylor with 1,203 games played (1,111 regular season and 92 postseason) and Brown will reach 1,197 games played tomorrow night (1,112 regular season and 85 postseason).
• Brown ranks second all-time in seasons played with the Kings (15 seasons; 2003-2019); only Taylor (17 seasons; 1977-1994) has played more seasons for the franchise.
• Brown recently scored his 20th goal this season, giving him seven career 20-plus goal seasons. He’s reached the 20-goal mark in two consecutive seasons and he scored a career-high 33 goals with the Kings during the 2007-08 season.
• Brown during the regular season ranks first in all-time hits (3,359), sixth all-time in goals (281), ninth in all-time in assists (334), eighth all-time in points (615), fifth all-time in power plays goals (95), fifth all-time in game-winning goals (40), second all-time in overtime goals (9) and third all-time in shots attempted (2,906).
• Brown during the postseason ranks first all-time in hits (413), third all-time in games played (85), eighth all-time in goals (19), tied for seventh all-time in assists (28), eighth all-time in points (47), tied for fourth all-time in plus-minus (plus-14), tied for seventh all-time in power play goals (6), tied for first all-time in short-handed goals (2), tied for second all-time in game-winning goals (5) and fourth all-time in shots (197).
• Brown served as the Kings captain from 2008-16. He became the youngest captain (23-years-old) and the first American captain for the Kings on October 8, 2008.
• Brown was named the Kings MVP following the 2008-09 season. He also shares the franchise record for most times being named the team’s Most Popular Player (four times: 2012-13, 2009-10, 2008-09 and 2007-08). He was also named the team’s Most Inspirational Player following the 2017-18 and 2007-08 seasons, and he was the recipient of the Jim Fox Community Service Award in 2010-11, 2009-10 and 2008-09.
• Brown won the Mark Messier NHL Leadership Award in 2014 — in recognition of his commitment and service to charities in his community — and the NHL Foundation Player Award in 2011 for his extensive charity work in the Los Angeles community. He also represented the Kings at the 2009 NHL All-Star Game in Montreal.
• Brown also skated for Team USA at the 2014 and 2010 Winter Olympic Games. He won a silver medal with Team USA during the 2010 tournament.
• Brown’s first NHL game – October 9, 2003 at Detroit; Brown’s first NHL goal – November 22, 2003 at Colorado; Brown’s first NHL assist – November 5, 2003 at Florida.

The Kings close their three-game road trip tomorrow against the Canucks at 7 p.m. The game will be broadcast on FOX Sports West, the FOX Sports App and the LA Kings Audio Network on iHeartRadio. 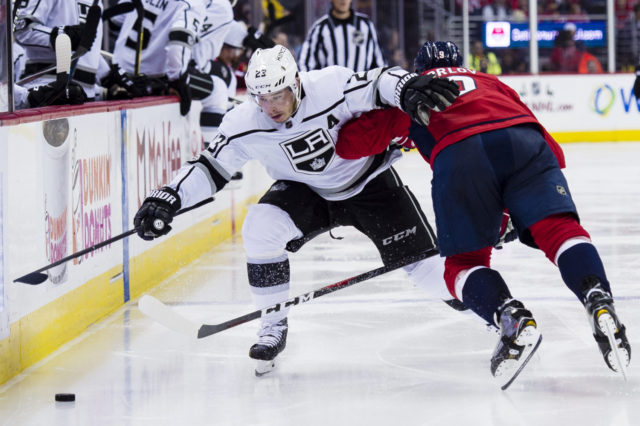 WASHINGTON, DC – NOVEMBER 30: Dustin Brown #23 of the Los Angeles Kings and Dmitry Orlov #9 of the Washington Capitals battle for the puck in the second period at Capital One Arena on November 30, 2017 in Washington, DC. (Photo by Patrick McDermott/NHLI via Getty Images)