Waking up with the Kings: March 11 - LA Kings Insider

Waking up with the Kings: March 11

Any and all Lose for Hughes daydreams are suspended when the LA Kings and Anaheim Ducks meet, and even though these might have been the dreariest stakes since the Freeway Faceoff’s branding, there were still a number of things to like about the visitors’ execution and investment in a 3-2 win. The Kings’ structure was excellent and denied the Ducks any real speed or cohesion leaving their own zone through the first half of the game. Anaheim’s third shot on goal was registered with 11:12 remaining in the second period, a testament to Los Angeles’ forecheck – and perhaps some friendly stat-keeping, because Jaycob Megna’s 51-foot shot was heading wide. Paul LaDue blocked Adam Henrique’s shot 30 seconds earlier, marking the Ducks’ first shot attempt of the period. Want more? After Daniel Sprong’s goal, Anaheim’s next shot within 35 feet of the net came with six and a half minutes remaining in the second period. Yowzers. I’ve got a theory here: the Ducks aren’t that good, either.

Du Gamla, Du Fria. Two young MODO alums whose Västernorland and Västerbotten County hometowns are separated by 120 miles of Baltic Sea coastline, Adrian Kempe and Carl Grundstrom have shared the ice for 23 minutes and 48 seconds, a span in which the Kings have taken 14 shots and the opposition seven. With Tyler Toffoli and Grundstrom on the ice, it’s a 16-7 on-ice shot discrepancy. Natural Stat Trick has the scoring chance ratio at better than two-to-one. This is a bit of an adrenaline-boosted honeymoon period; it’ll be interesting to see how Grundstrom fares in a week or two. Some younger players have responded well to added attention, and Austin Wagner has essentially forced the team’s hand to keep him up by providing some encouraging substance in his role, even after weathering the inevitable rookie-year dips. Grundstrom has come as advertised as a physical player who skates well and goes to hard areas, and that’s something opponents will become increasingly aware of as he gains experience at the end of the season, so it’ll be interesting to see how he handles this push-back. It’s encouraging that he gave a good account of himself on the road in a pair of physical divisional games against the Coyotes and Ducks. 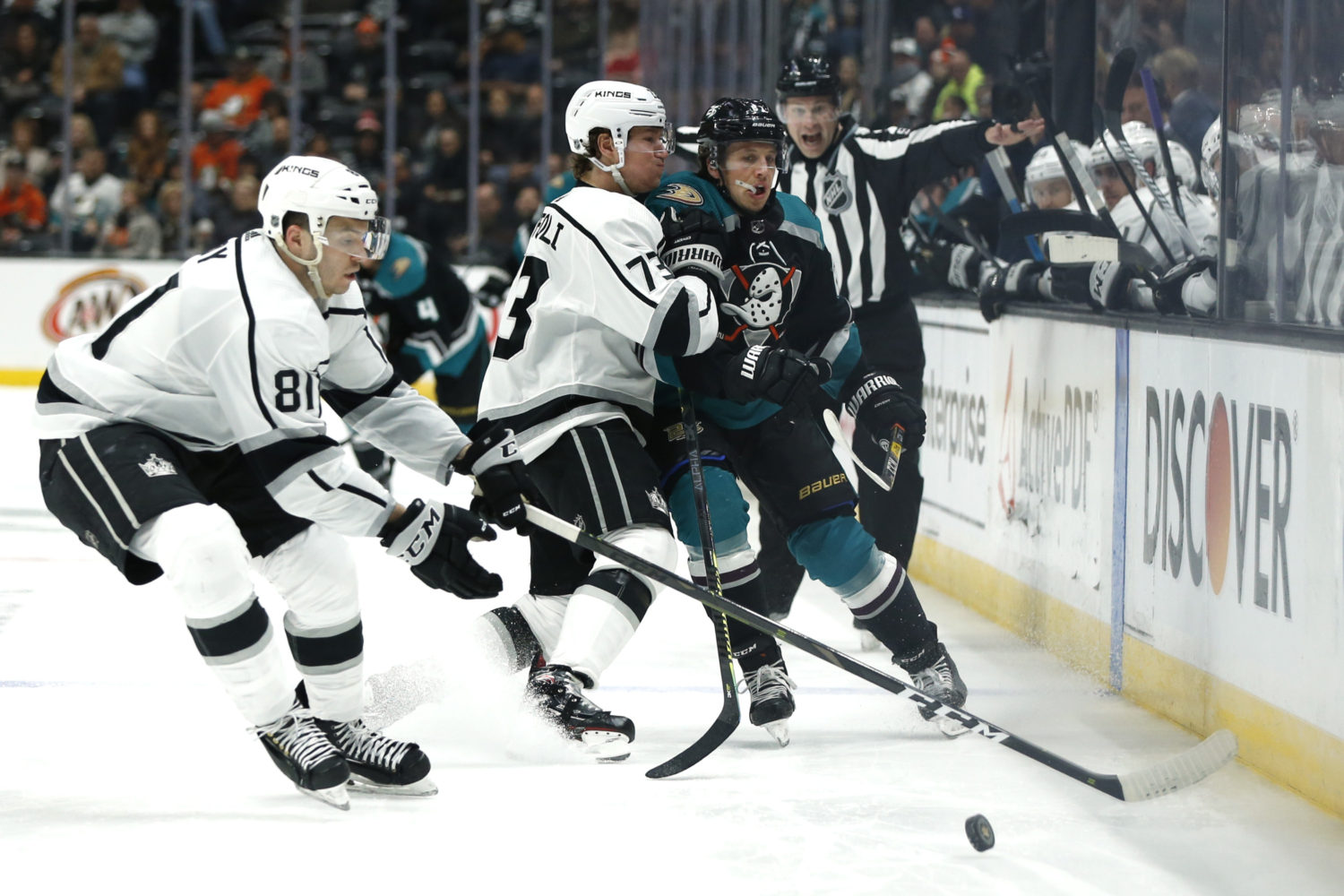 Matt Roy added another solid 14 minutes to the 20 minutes he’d played the night before, and even amidst a semi-regular defensive rotation hasn’t come out of the lineup since making his debut in Boston on February 16. His dive to break up a two-on-one feed from Ryan Getzlaf to Rickard Rakell was a significant blow to the swelling of Anaheim pressure, and for a someone who plays a poised, controlled game that to the benefit of the team doesn’t often stick out, the play served as the most visual demonstration of his heady play and underrated skating ability. Obviously this is a welcome development for a team rebuilding its back end and adds another stout dimension to a current unit that also has an offensively-minded, up-tempo option on the right side in Sean Walker. Selected 194th overall in 2015, only one player selected after Roy – Winnipeg’s Sami Niku, taken 198th – has made their NHL debut. 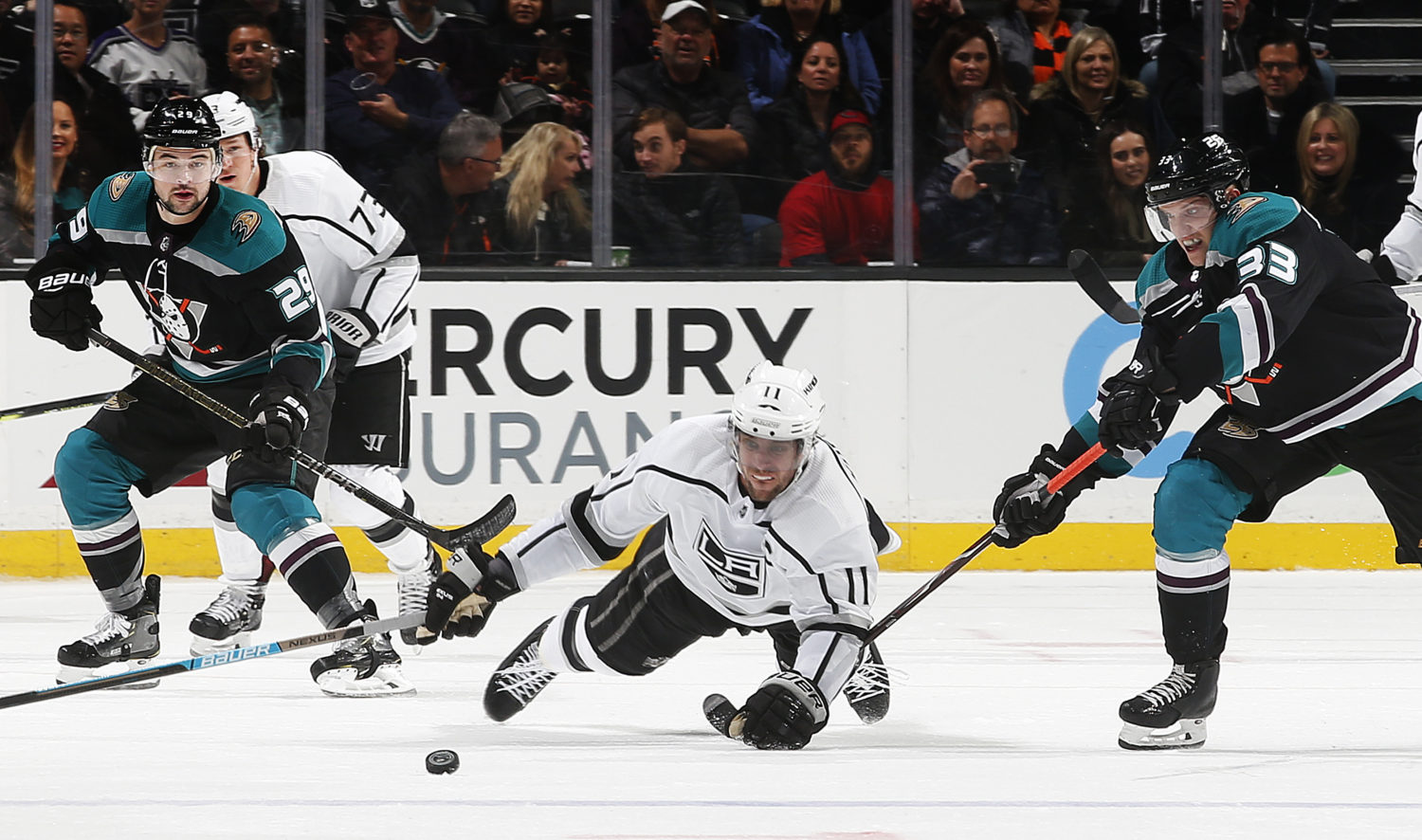 Kyle Clifford is getting rewarded for the work and focus he puts in. As the game’s pace has picked up, his skating and shot selection have improved. “Where before I was kind of getting locked in on shooting in one area, now I’m kind of picking my head up and almost picking the spots a little more and just being an all-around smarter player,” he said after the game. Receiving Trevor Lewis’ crisp pass across the neutral zone, he burned past attempted Korbinian Holzer contact, and with Megna gravitating towards Jonny Brodzinski, Clifford made a power move to the low slot and snapped the puck between Ryan Miller’s glove and left pad for his eighth goal of the season, a career-high. (He also had seven in the truncated 2012-13 season.) I don’t get the sense the personal high means a great deal for Clifford; whether he wears a letter or not, he’s a leader and captain on this team, and it’s a good model that the work he puts in has result in tangible improvements in production. This stretch has weighed as heavily on Clifford as anyone, so it’s appropriate to see him score the game-winner as the team heads into a short break off a win. 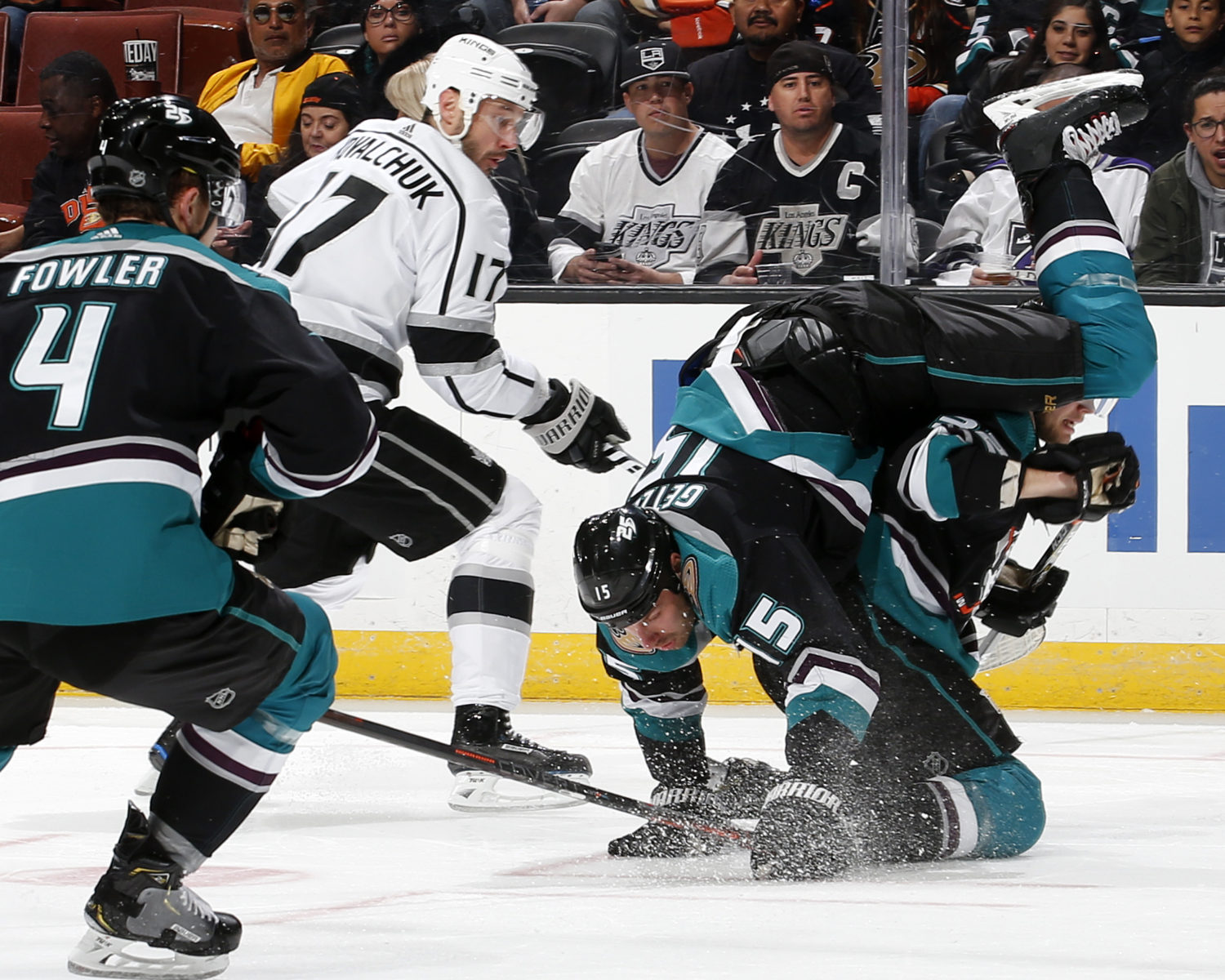