The Reign hit the ice this afternoon for a practice day in Colorado, skating this afternoon at Budweiser Events Center. Practice days on the road are rare in the American Hockey League. With games typically played on the weekends, it’s rare to see a road trip that includes a practice day, as the Reign’s seven-day swing currently does.

Here’s how Ontario lined up today –

Ontario enters the midweek back-to-back in Colorado playing some of its best hockey of the season. The Reign have won six of their last eight games, are 6-3-1 in their last ten games and have points in seven of their last nine and eight of their last 11. This is the Reign’s second-best ten-game stretch of the season, one point shy of the 7-3-0 run from November 2 through November 29.

Waiting for the Reign, however, are another hot team in the Colorado Eagles. Since Ontario shutout Colorado on February 23 in the Inland Empire, the Eagles have won six straight games, conceding just six goals in total over that span, including three shutouts. Ontario, on the other hand, has scored 25 goals over its five games played since the February meeting with the Eagles, pitting one of the AHL’s hottest offenses against one of its stingiest defenses as of late. 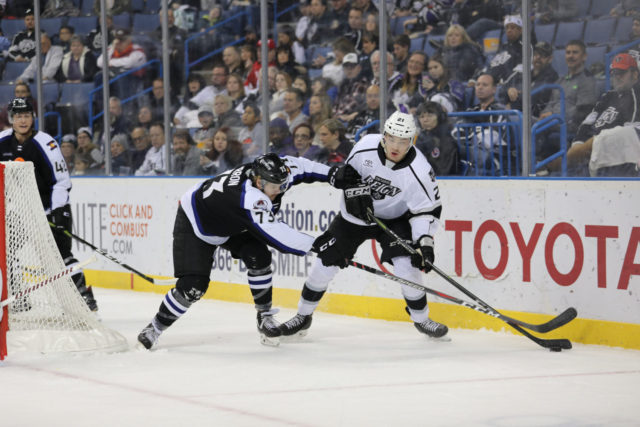 This week’s set in Colorado marks the return home for Reign forward Mikey Eyssimont, a native of Littleton, Colorado, which is approximately 90 minutes from Budweiser Events Center.

While the Reign did come once earlier in the season, that trip in October was the first time that Eyssimont had played or attended a game at the building he will skate in tomorrow and Wednesday.

The first-year forward noted that he has friends that go to both Colorado State and Colorado University, Boulder, that will be able to come to the games tomorrow or Wednesday.

Eyssimont was pretty excited to get another set of games so close to home.

“It’s super exciting,” he said after practice today. “I had always known about the Eagles growing up, and now that they’re an AHL team it’s cool to come here and regardless, it’s a really good building to play in, with the excitement from the fans and everything.”

The atmosphere he’s referring to comes from an Eagles fan base that has filled the building at a 97.6% clip this season, with an average attendance of 5,162. The small building size provides for a high noise level and a pretty strong atmosphere, one that carried over from the ECHL with the franchise.

Eyssimont found the back of the net in his most recent game, in Saturday’s win over Tucson, and is slowly but steadily adjusting to the professional game in his first season.

“Little by little,” Eyssimont said of his adjustment process. “I’m not where I want to be yet and I’m still trying to be a make a better staple in the lineup and be more a part of the wins and stuff like that. Overall though, I feel like I’m improving as a hockey player and I think that’s the main thing.”

Reign Podcast, v4
Cameron Close and I hosted defenseman Craig Wyszomirski on the latest edition of the Reign Podcast. We talked to the blueliner about his development path, going viral through his dance moves, his progression from the ECHL to the AHL and more.

The Reign and Eagles will square off each of the next two nights, with puck drop slated for 6:05 PM Pacific.