Grundstrom recalled; will debut at Arizona alongside Kempe, Toffoli

As we’d expected yesterday, Carl Grundstrom has officially been recalled from AHL-Ontario. Acquired as part of the return in Jake Muzzin’s trade to Toronto on January 28, Grundstrom, a 2016 second round draft pick, has 16 goals and 39 points in 55 games between the Marlies and Reign.

“If you look at his track record, he’s a high-end player,” Willie Desjardins said. “He plays both ways. In pro he’s been more of a two-way guy, but coming through he was a scorer, so I think he has lots to his game.”

Grundstrom played with Adrian Kempe for a pair of MODO’s junior teams in the 2013-14 season as well as Sweden’s World Juniors team in 2016 – his first year at the tournament and Kempe’s second. They’ll play on a line with Tyler Toffoli in tonight’s game at Arizona (5:00 p.m. PT / FOX Sports West / FOX Sports app / LA Kings Audio Network).

“Yeah, of course [our familiarity] helps a lot,” said Grundstrom, who will wear #38. “It feels good that I know a couple guys here on the team.”

Naturally, if you are from Örnsköldsvik or surrounding environs (or, really, if you’re simply Swedish), Peter Forsberg is your favorite player. I am yet to see an exception. Grundstrom grew up idolizing Forsberg and recently played in his golf tournament in Örnsköldsvik. Both Kempe and Grundstrom played for Forsberg while he was MODO’s assistant general manager.

Grundstrom also played for Mike Stothers, who has been known to provide memorable well-wishing to those who’ve come through the team’s system and are on the verge of their NHL debuts. “Last thing I said to Merschy was, ‘I don’t want to see you back,’” he said to Michael Mersch before his December, 2015 NHL debut.

Mersch, of course, had played under Stothers for years and won a Calder Cup under him in Manchester. Grundstrom’s elevation to the parent club didn’t follow the same type of crescendo. “No, nothing special, actually,” Grundstrom said. “He just wished me good luck and hoped that it’ll go well for me.”

Known as a north-south player with good speed and finishing ability who forechecks well and is capable of winning battles, Grundstrom has – well, let’s just let his former teammate provide the scouting report.

“He has a lot of speed,” Kempe said. “He plays hard, he’s good with the puck. I think he has a heavy game and forecheck, he’s a really good goal scorer as well. In the Swedish league he had almost 20 goals a couple seasons ago, and that’s pretty hard when you’re 18 or 19 years old.”

Kempe also noted that he hadn’t played with Grundstrom in recent years, but that the skill set should still hold true. As a coachable player with a good constitution, he’ll be expected to keep the same approach during his late-season NHL exposure.

“I think the biggest thing, wherever you go or whatever the change is, is do what you do,” Desjardins said. “The reason you got there is because of the things you’re doing, and just because you go to a new level, to me it’s like going into the playoffs. Don’t change what you were doing to get there, and I think that would be the mindset for him.”

Kempe was able to do that after joining Manchester during the club’s 2015 Calder Cup run, a span in which he scored eight times in 17 games. Grundstrom, a 2018 Calder Cup champion with the Marlies, who defeated the Texas Stars at home in Game 7, will now look to transfer his play from last year’s tournament, which resulted in eight goals and 14 points over 20 games, into the National Hockey League.

“Obviously I was very happy [to learn I would be recalled],” he said. “It’s been a dream since I was a kid, so it feels really good.” 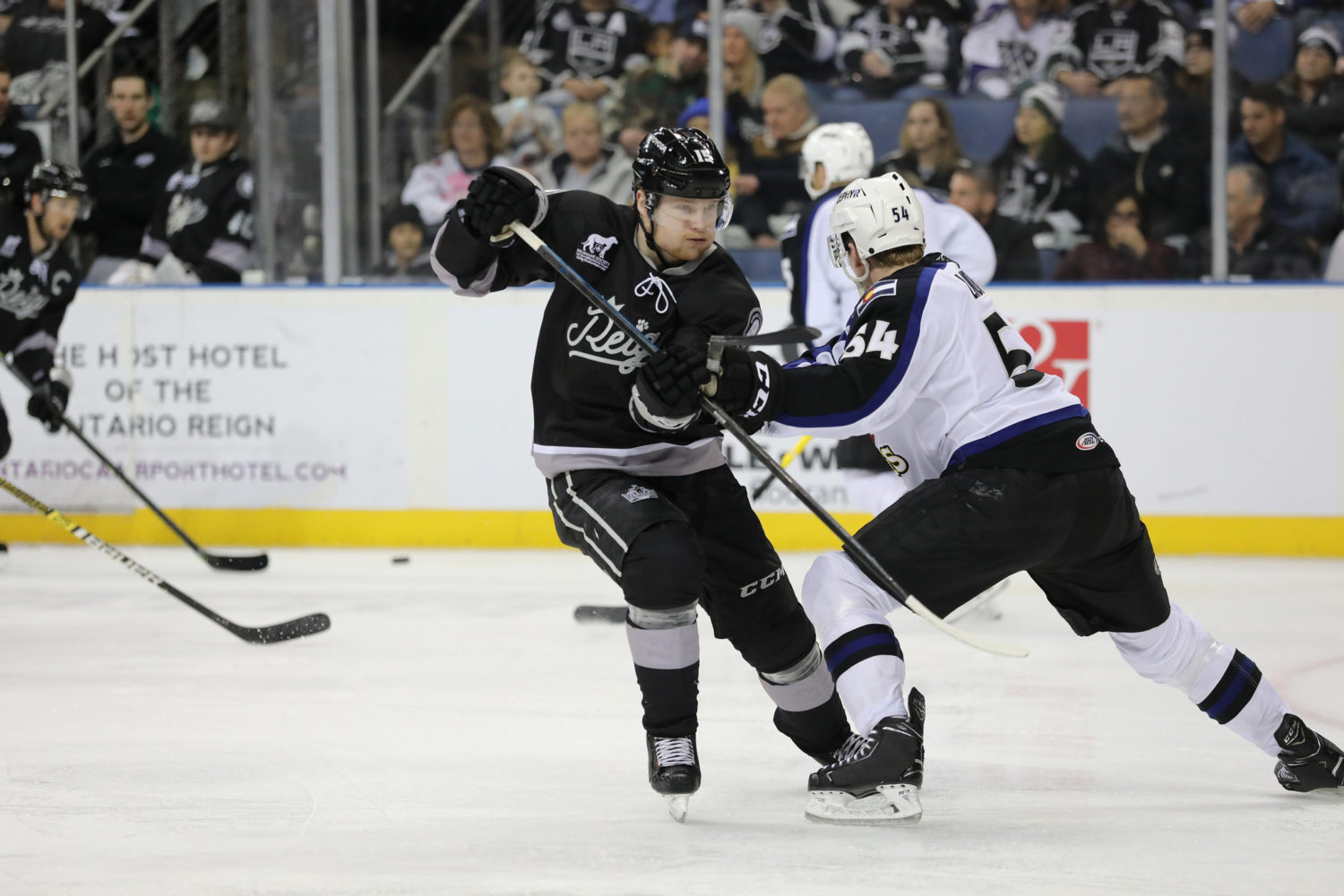 Adrian Kempe, on what Grundstrom can take away from his Calder Cup success:
It’s tough to come over right away, and we both came over onto really good teams. It’s obviously really tough to play in the playoffs. It’s another level when you get up here, but I think it’s a good experience before coming into the NHL. He had a good playoff run in the minors. Just get more experience, I think, and it’ll help you before you come up here and make your debut, for sure.

So using 5v5 scoring rates I have Carl Grundstrom as my 11th ranked AHL prospect behind the following:

Carl Grundstrom, acquired from Toronto in the Jake Muzzin trade, has been recalled and will make his NHL debut tonight In Arizona. An opening at practice yesterday was on a line with Adrian Kempe and Tyler Toffoli. FYI: Photo credit – Jeff Moeller.