INSIDERS. For the first time since the preseason, [prolonged howling].

Prior to departing for Phoenix, the LA Kings took the Toyota Sports Center ice at 11:00 a.m. and aligned differently than they had against St. Louis. First, Tyler Toffoli was moved alongside Adrian Kempe, while Alex Iafallo returned to the left of Anze Kopitar, thus flipping Dustin Brown over to the right. Also, Kurtis MacDermid was holding a spot alongside Kempe and Toffoli as the club skated one forward short. Hey, that sounds like news!

–Matt Luff was assigned to AHL-Ontario this morning. There was no corresponding move today, but “I would expect somebody will be coming up,” Willie Desjardins said. Keep in mind teams are permitted four recalls from the American Hockey League after the trade deadline and used one on Kurtis MacDermid. Luff’s recent stay was on an emergency recall, which doesn’t count against the four.

Luff, who has the team’s only goal in the last 120 minutes, played 8:19 in Thursday’s shutout loss to St. Louis and will have a wider opportunity when he rejoins the Reign, allowing the Kings use the time to evaluate other forwards at the NHL level. Luff is expected to join the team on their current trip through Tucson and Colorado.

“I think he’s a young player, he’s a guy that’s growing and learning, so I think guys like that will go up and down,” Desjardins said. “I think that’s just what will happen. There are other guys we need to look at. You just have so many call-ups through the league. It’s not like when he went out that he was bad – he wasn’t bad in the game. He scored the one. But I think it’s just the matter of a young guy, we want to look at a few guys. He needs to play. If he’s not going to play 10, 11 minutes up here, then lots of times it’s better that he gets more ice time down there. It’s just for his development. He wasn’t sent down because he was bad, he was sent down for development.”

Desjardins was then asked about the balance between issuing enough ice time that’s fair for both parties in which the player benefits from NHL-level hockey and the team is able to get a realistic assessment of his ability. He responded that it’s important for players to be put in a situation in which they’ll have the opportunity to succeed, while “at the same time, you have guys like Clifford and Lewis that deserve ice time as well.”

Austin Wagner (lower-body) skated in a track suit and a helmet under the watch of team trainers one hour before the practice. He’s no longer on crutches and is probably looking at Thursday’s game against Nashville as the earliest realistic return date.

–Anze Kopitar awoke to a pleasant surprise on Thursday: Borut Pahor, the President of Slovenia, had left a touching message on social media thanking the family for art created by Kopitar’s daughter and passed along by one of his advisors.

“We have hand-written letters from him for each of our kids congratulating us [on their births], so I thought that was really cool,” said Kopitar, who became friendly with the President earlier this decade. “After the second Cup he invited me to the Presidential Palace, so we hung out a little bit there. One of Ines’ really good friends is a special advisor to him and she was here, and Neza drew him a picture – a rainbow.”

Their bond is built purely on friendship and not out of any political coalition. The Presidency, while the state’s highest and most respected public office, is more involved in diplomacy than the day-to-day governing and direction of legislation spearheaded by the Prime Minister. “I’m a Slovenian citizen and I obviously love my country, but I don’t need to be on one side. I’m right down the middle,” said Kopitar.

His advocacy projects are all charitable undertakings. Kopitar’s annual golf tournament has raised hundreds of thousands of dollars for the pediatric department of Jesenice General Hospital, disadvantaged families and individuals and young Slovenian athletes. He also runs a hockey academy in Bled with former national team captain Tomaz Razingar, which is adjacent to Jesenice and a locus of Slovenian hockey and year-round outdoor activity.

“The one thing I want to do is I want to help kids, and my golf tournament benefits mostly kids and a local hospital that I grew up near,” he said. “If the project is right, promoting Slovenia, I’m all for it. … On our national team logo we have the lynx, so I actually shot a commercial last year to help preserve the species.”

While on a Kopitar YouTube wormhole, I came across this Jaromir Jagr interview with Slovenian television last summer in which the Czech legend compared their skill sets and offered respect to Kopitar’s two-way game. “He reminds me of myself and the way he’s built, I play that way,” Jagr said before letting out a good laugh. “I was stronger than him.”

–The best news of the day: Arizona will be wearing their Kachina jerseys on Saturday. Among the more beautiful jerseys in hockey history, the Coyotes went away from their radical brick red/green/desert sand/brown/purple-hued sweaters after the 2002-03 season. No current King faced Phoenix in their pre-2003 color scheme. 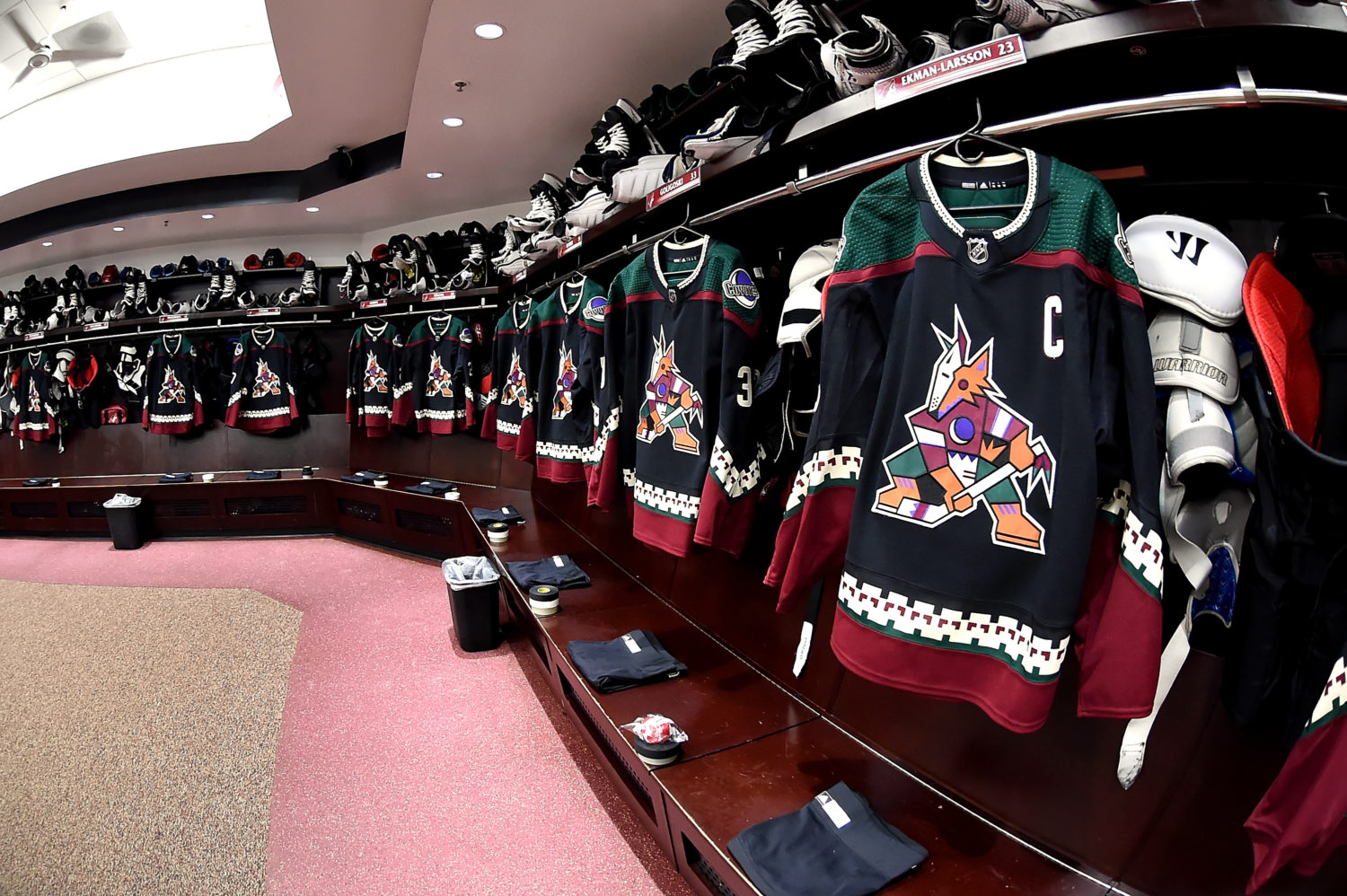 Alex Iafallo didn’t have any strong opinions towards the major redesign his hometown Sabres undertook in the late 1990’s when they abruptly switched from their traditional blue and gold palette to the red, silver and black scheme seen in a lot of Dominik Hasek highlights. Iafallo also owned a white Coyotes jersey growing up that he’d wear “just go out on the pond or something.”

During some light polling, players and coaches offered support for the more classic styles, though several 1980’s and 1990’s get-ups drew recognition.

“I’m a big fan of New Jersey when they wear the green pants,” Alec Martinez said, referencing their look from the NHL video games of his youth. Nostalgia is important here, and certainly an influence in other teams like Los Angeles, Calgary or Anaheim reintroducing vintage looks at various points in recent years.

“I wish they’d bring the actual Mighty Ducks jerseys – the green with the actual duck on it. Charlie Conway or Adam Banks,” he said before quoting D2. “Adam Banks woke up and the pain was gone.”

And perhaps this was just a ruse to talk to Martinez about Detroit-area jerseys. Even the Pistons, an NBA franchise with a storied legacy, fell into the sordid later stages of the 1990’s teal revolution.

“Oh yeah, the horse and all that. Grant Hill. I wasn’t a huge fan of that [color scheme]. I liked the ones now that say Motor City on them, I think that’s pretty cool. There’s been some good throwbacks this year with Adidas allowing the third jersey,” Martinez said.

“I liked the old Detroit [Red Wings] jerseys, where they had the stripe – they didn’t have the logo, they just had “DETROIT,” he said of their early 1990’s reprisal. “I think of Bob Probert in those.”

Willie Desjardins referred to himself as a “traditionalist” but also understood the appeal of something new and unique. And he, like the players, spoke favorably of the Kings’ black-and-white uniforms while also complementing others.

“The Blackhawk jersey is a good jersey, there are all kinds, the Canadiens. The Original Six all have great jerseys,” he said.

Regardless of what they’re wearing, Arizona should provide a stiff challenge. The Coyotes have won seven of eight to make some serious noise in the playoff race, showing good resolve amidst 328 man-games lost to injury. (Los Angeles is at 233 man-games entering Saturday.)

“For us, we better be ready. Like, if we think they’re the Arizona of old, we’re wrong, because they’re not,” Desjardins said. “They’ve gone into a lot of tough buildings and won, and they’re going to be playing hard tomorrow.” 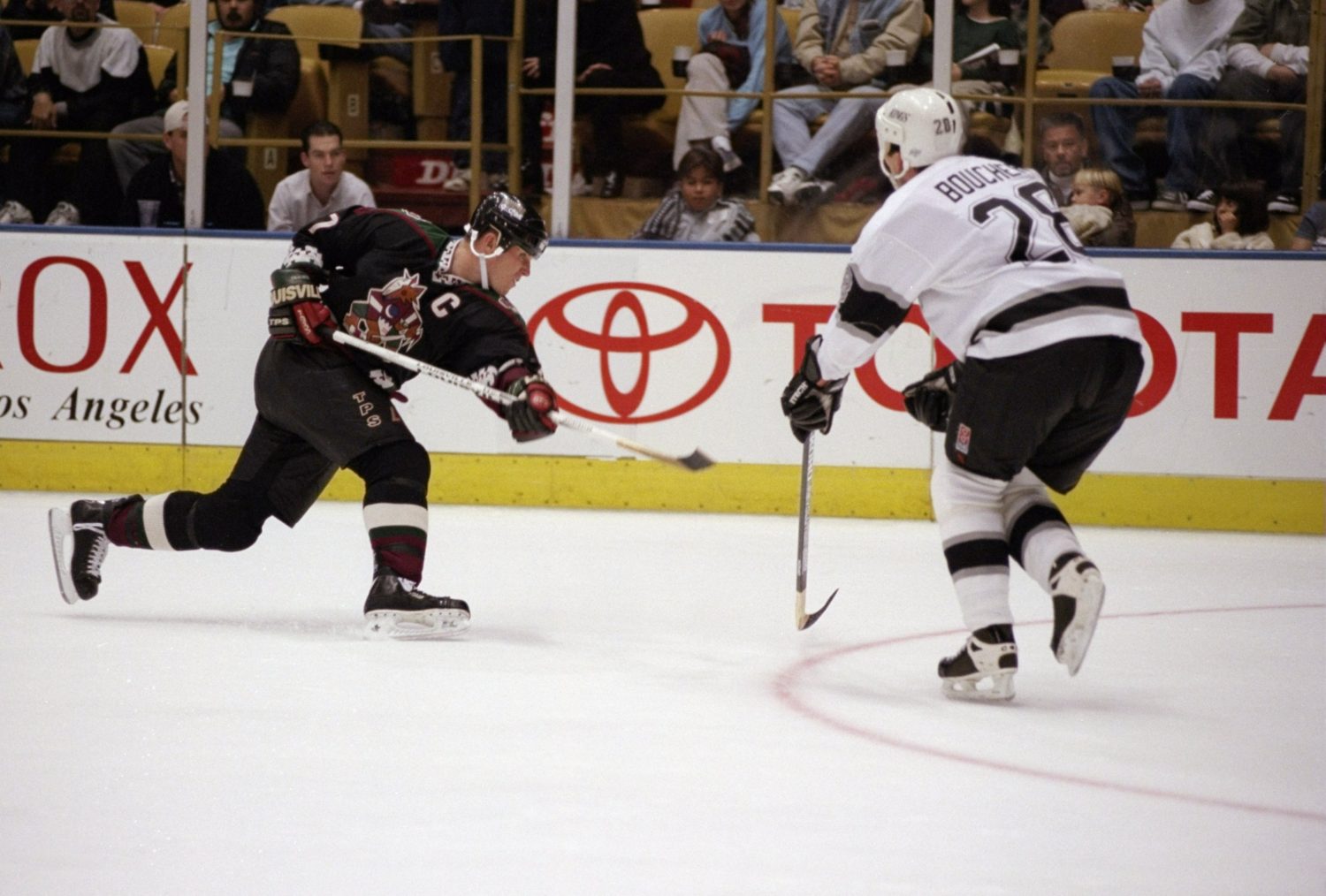