The Ontario Reign scored a season-high eight goals…..yes, eight goals, in a Friday night victory over the San Jose Barracuda. With the victory, Ontario has now won three of its last four games and has earned points in four of its last five.

Forward Matt Moulson led the charge with a four-point night (2-2-4), one of eight Reign skaters with multiple points on the evening. In his first game back with the team, forward Mike Amadio tallied a goal and two assists, while forward Sheldon Rempal ended a 10-game goalless drought with two tallies, including a highlight-reel goal in the second period.

The game began on a pretty even note, with San Jose opening up leads of 1-0, 2-1 and 3-2, with the Reign answering the bell each time. Ontario really opened things up in the second period, however, as they scored three times in less than five minutes, including two goals in less than two minutes, to turn a 3-2 deficit into a 5-3 lead.

The Barracuda closed the gap back to a one-goal game midway through the third period, as the visitors began to siege the Ontario net, but the quick-strike Reign offense, with two goals in 16 seconds, propelled Ontario to the victory, with Moulson capping off the scoring with an empty-net tally.

While the eight goals stole the headlines, goaltender Cal Petersen made 52 saves on 56 shots, as he tied a career-high for saves in a game, ironically matching a mark he set in mid-February against this very San Jose team. Reign Head Coach Mike Stothers noted after the game that goaltender Peter Budaj will get the start tomorrow evening, while Petersen will go again on Sunday afternoon. “You’ve got to have good goaltending…..especially with the way we play,” he joked after the win.

The Reign continue their three-in-three set tomorrow evening as they host the Iowa Wild at 6 PM in Ontario, followed by a rematch on Sunday afternoon. The Wild enter tomorrow’s game on a high note after ending Bakersfield’s winning streak at 17 games with a 1-0 victory earlier this evening.

Kale Clague on the eight-goal output and tonight’s win
Yeah, it was a good win. I thought our group battled hard, we stuck with it all game. Obviously there were some tough bounces earlier in the game but I thought we did a great stop of sticking with it and getting the two points.

On his progress as he enters the backend of his first pro season
I think I’ve come a long way. Earlier in the year, I had some bad habits that I needed to break, some juniors habits that needed to get out of my pro game. I thought I’ve been steady, gradually, I’ve continued to get better. I thought, throughout the course of the year, I’m getting a lot more opportunities with some guys being up, so it’s important for me to play well in those minutes and take advantage of the opportunity. Obviously it was a great win tonight, personally I need to be a little bit better tomorrow, but it was a great win.

On taking on a larger role in the absence of other key Reign defensemen
I think, with it being my first year pro, I think this is such a great opportunity for myself and some other defensemen in the room to take on a bigger role. Those guys play a lot of minutes when they’re down here, so whenever there’s a chance for guys to step up, like myself, and play more minutes, that’s important. Especially in my first year pro, it’s not too often I guess that a 20-year-old is getting these minutes in the American Hockey League. It’s important for me and I just want to help my team win every chance I get.

On what he’s looking to improve on in the rest of the season
More of the same. Just a little more assertive in the d-zone, I know that was a big thing that the development staff and the coaching staff wanted me to work on. Getting back hard for pucks is a key to my game, making a good first outlet pass and creating offense, being solid and steady in my own zone.

Mike Stothers on tonight’s game and what the Reign are playing for down the stretch
To me, this is a real tell all for the character that they have. I know the older guys that we have, I know the guys that we can count on, now it’s interesting to see how the young guys respond. We’ve got a lot to play for here. The guys are playing for positions, whether it’s with the Kings or within the organization or with the Reign next year, so let’s make sure we’re doing our thing. I liked the fact that we had an element of toughness to us tonight. We talked about that just a little bit ago. It’s one thing to not win, but how you react to not winning and when we talked about Dermy and Boko, we’ve got to get sick and tired of losing, we’ve got to get frustrated. If you play hard and you play physical, tonight was a clear example. Two guys play hard and a fight breaks out. None of this staged s**t that goes on, you talk about it, you dance around the middle of the ice, it’s just two guys, Wyz and Martin. They go into the corner, they play hard, they’re banging and crashing and the next thing you know the gloves are off. Sammy’s into it with Veil, it’s the same type of thing. It shows that you’re involved in the game, shows you care about your team and the situation. We’re playing hard, s**t breaks out. We should be responding to it. I couldn’t be happier with these guys, I love these guys, I’m proud of them. It’s awesome. 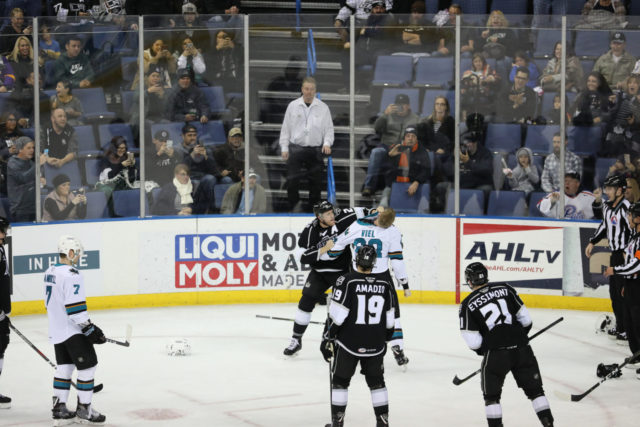 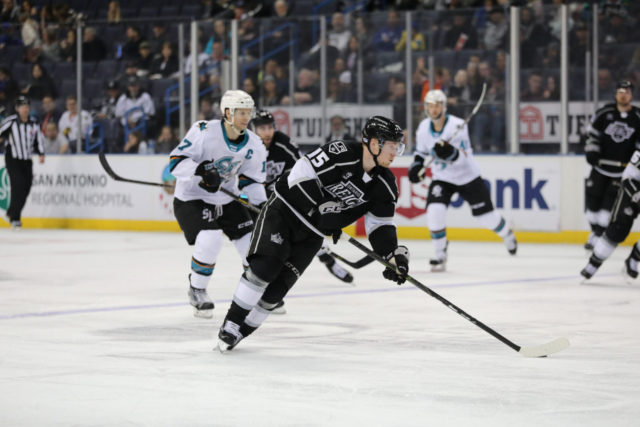 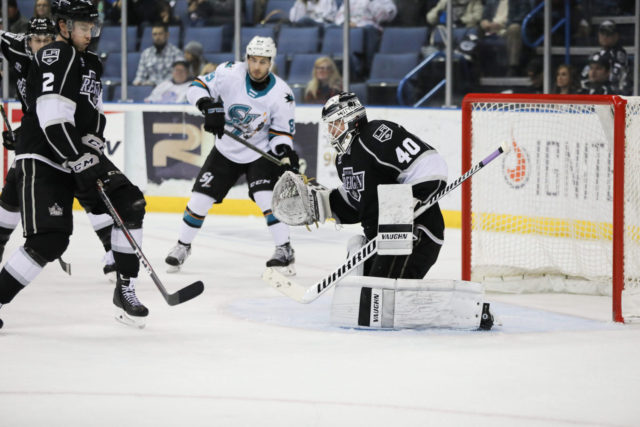