There’s not a great deal more to be said that hasn’t been said since about the LA Kings since the second or third week of the season, even as some details change. They’ve lost nine in a row. And though their team game may have been relatively healthy a week or two ago, they lost 6-1 in two of their last three games, scored only one goal in three of four and allowed their 10th power play goal since the losing streak began in Boston on February 9. Their two most significant investments, Drew Doughty and Anze Kopitar, have been on the ice for 19 and 18 goals against in all situations. For the second straight game after Rob Blake placed an onus on the veterans to be “just as competitive” as the younger players, the team was again slower to pucks early, and the Trevor Lewis line was on the ice for 10 of the 21 first period shot attempts, while the combination of Ilya Kovalchuk (1 CF, 11 CA in 8:40 5×5 TOI), Jeff Carter (2 CF, 15 CA) and Tyler Toffoli (3 CF, 16 CA) was ineffective throughout. Sure, they’d emptied the tank in Tampa, and the red-hot Hurricanes, led by Dougie Hamilton and the underrated Jaccob Slavin on Tuesday, are clicking and rejuvenated. But it’s bizarre to think that there are still questions about investment and purpose and drive when they’re looking to end the third-longest losing streak in club history, and that they continue to perform wretchedly in front of Jonathan Quick. 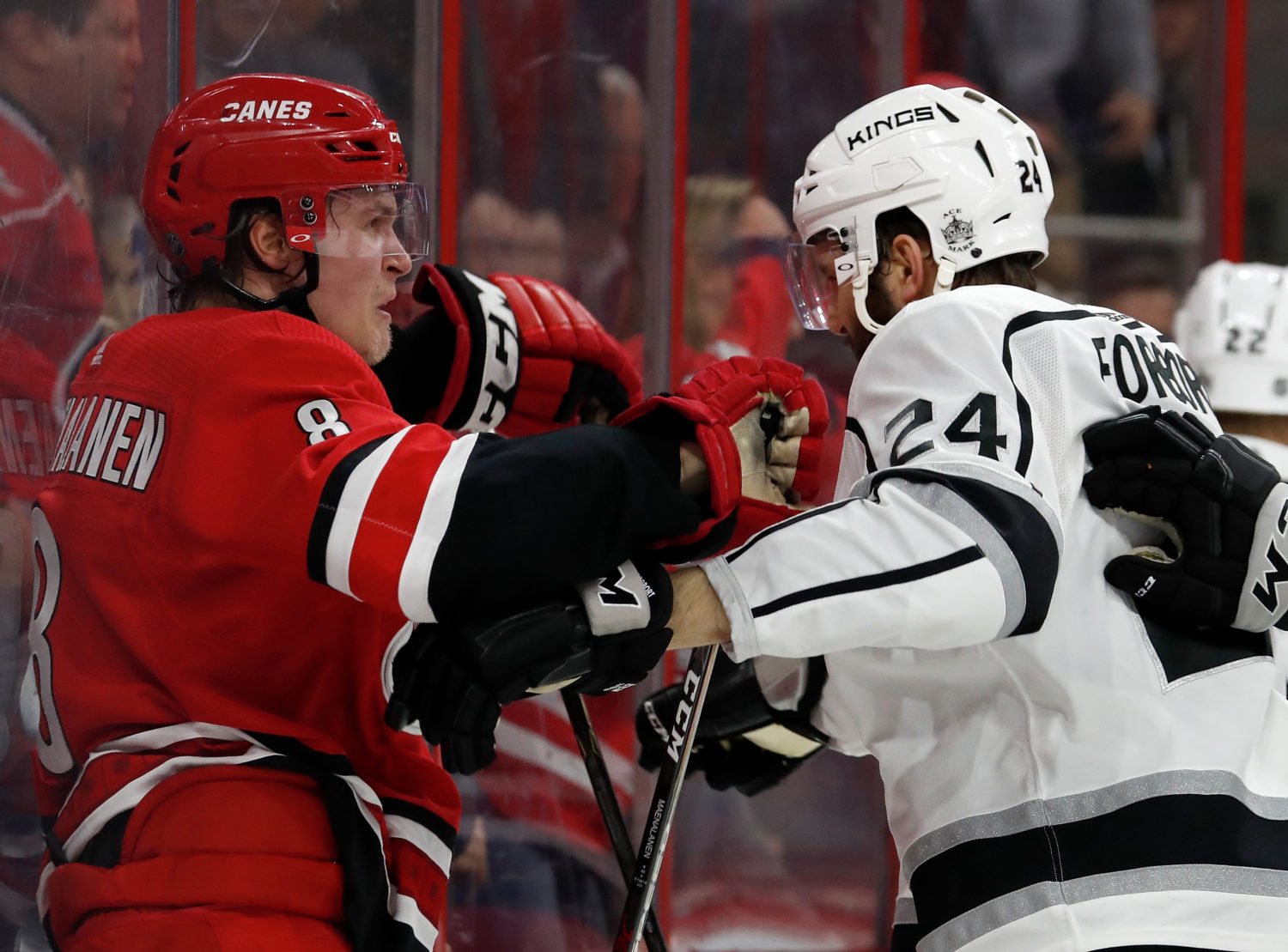 With sincere respect to Willie Desjardins, an NHL, Olympic and World Juniors head coach and a Calder Cup and two-time Ed Chynoweth Cup champion, I’m fine with Quick showing some fire in the absence of the first period challenge on Hamilton’s goal. Nothing else seems to be sparking the team at this point; maybe this demonstrative event provides some kind of twilight rallying cry. The teams’ personnel are not on equal playing fields, but when the 2014-15 team shut Darryl Sutter out of the locker room after a win in Tampa, they went on to win a franchise-record eight in a row. Something like that is fantasy at this point, but perhaps Quick restarted the pistons that allow this club to climb out of the nosedive they’re currently in. My initial reaction upstairs while watching Hamilton’s goal live was that Quick had been interfered with. After viewing the replays, it looked like Dion Phaneuf did help channel Saku Maenalanen into Quick, and that the goal would probably be upheld. But I didn’t think the interpretation would be cut-and-dry, and one never knows with the somewhat subjective and non-linear precedent in the history of goaltender interference verdicts. Desjardins showed good character by acknowledging after the game that he should have challenged the play. 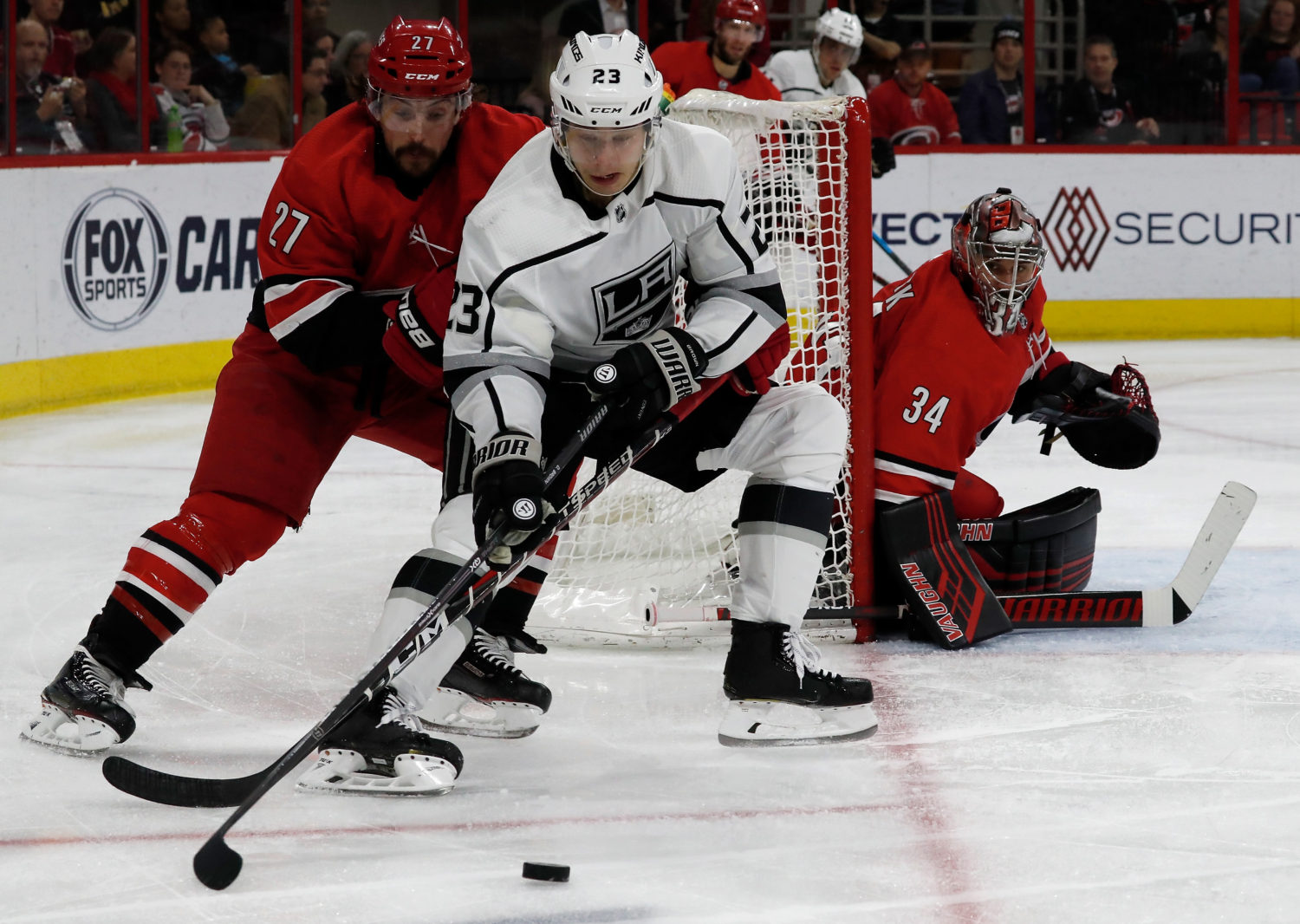 What a gift Don Cherry gave to Carolina by calling them a “bunch of jerks” and denouncing the Storm Surge, catalyzing at the perfect time a young and improving team whose captain, Justin Williams, has transferred his personality into the organizational DNA while creating a savvy and effective marketing campaign. This has resonated among Hurricanes fans, a unique and highly loyal fanbase that might get a few extra chances to tailgate this spring. Last night’s game, a Tuesday night cross-conference non-rivalry match-up, drew a larger crowd than I remember seeing during weekend PNC Arena dates, speaking to the initial success at which the team has capitalized on this opening. By winning a playoff round or two, Bunch of Jerks becomes the Rat Trick or the Rally Monkey, an organic sports talisman whose legacy is built through postseason success. A series between Carolina and Washington or Tampa (RIP, Southeast Division) would provide highly compelling match-ups.