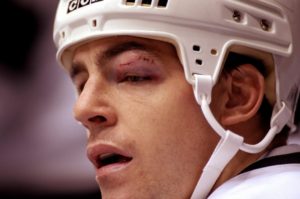 It’s Sean O’Donnell’s Legends Night at Staples Center this evening, which will provide an appreciative platform for the Kings and their fans to recognize one of the most accountable players to ever wear the crown. Around a pair of stints with Los Angeles, followed by his tenure with the club’s development staff, O’Donnell used the influence of those around him to pass along on and off-ice lessons to those who, like O’Donnell, grew into champions in their playing tenure.

“It’s nice to see the role guy get recognized instead of the star guy,” Darryl Sutter said after Ian Laperriere’s Legends Night in 2013, a notion he reinforced to Laperierre’s sons.

A similar afterword could be said of O’Donnell, who was never an All-Star and only once totaled more than 18 points in a season but was a tough-as-nails defensive defenseman willing to sacrifice his body and throw a fist or two for the greater good.

Schematics weren’t as complex, and nutrition and off-ice conditioning weren’t as advanced when O’Donnell broke into the league. The Kings were also not a good team. But in the later years of Wayne Gretzky’s tenure with the club, there were still a number of veterans O’Donnell credited with helping to establish a balanced approach and regimen in addition to 99. Marty McSorley. Jari Kurri. Tony Granato. Pat Conacher. Kelly Hrudey. Rob Blake. To be able to receive the opportunity O’Donnell did around an established collection of stars was a boon for a player who wouldn’t have received similar incubation and opportunity elsewhere.

“When I was in the minors, I was a stay at home guy that fought when I needed to, but if I had been drafted to a team back then, say a Pittsburgh or Detroit or one of those powerhouses, maybe those opportunities wouldn’t have been there to grow through the mistakes, because we weren’t a very good team,” he said. “I was able to play in a lot of situations and gain confidence from that, so team-wise it wasn’t good, but it was probably a blessing for me that I was able to break in under those kinds of circumstances.” 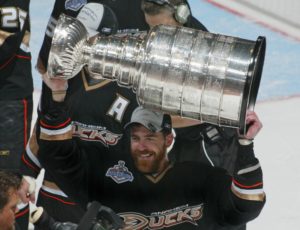 It was that second Kings stint that immediately followed a 161-game Ducks tenure in which he captured the 2007 Stanley Cup that helped lay the culture and foundation for what the Kings were able to achieve this decade. Los Angeles had young talent at the time, and the character provided by players like O’Donnell allowed their skill and ability to regularly rise to the surface.

“You look at a team, and obviously there are certain leaders on every team, but the championship teams, the really good teams, there are so many guys underneath the surface that are quiet, locker-room leaders,” he said. “Maybe it’s not a verbal thing, but I remember when I came to LA in [2008], Dean was always trying to build this organization. He was asking about the team in Anaheim – how many leaders did we have on that team? I think I told him 10 or 12, and he thought that was a crazy number, that it was ‘too many guys,’ and then they started bringing guys in like that, and I think if you look at those teams, when the Kings won in ’12 and ’14, you could probably count 8, 10 or 12 guys, and that’s really what you need. There’s the obvious guys that wear the letters and the veteran guys, but you need a lot of guys that are pulling that chain in the right direction, doing the right things in practice, pushing each other in practice, and that was the one thing I noticed, being around some teams. I was lucky enough to win in ’07, but being around some good teams, that was the biggest difference from some not good teams.”

“I think Terry Murray has to get a lot of credit … as far as putting in structure, putting in a system, putting in accountability, teaching the guys, ‘this is where you need to be and here’s why you need to be there,’” he said. “It’s one thing for coaches to say, ‘you’ve got to be on this wall,’ or ‘you have to be here, ‘but to be able to say, ‘here’s why you have to be here, if you’re here, then they have to do this,’ then it’s almost like a chess game. ‘You have to move here, because then you’re forcing them to do something they don’t want to do,’ and Terry was very good at getting that across. He loved his video. He loved the teaching part. I think it was a perfect coach at the time for the Kings to get back to playing better defensively and more sound as a unit around the ice.”

Also beneficial was his steady hand and voice alongside a young Drew Doughty, whose arrival in Los Angeles pre-dated O’Donnell’s arrival via trade from Anaheim by only three months. 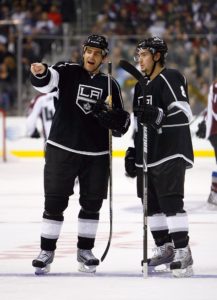 “First and foremost, he was just such a great person, a great teammate, a great leader. He helped me so much. He helped me through a lot of things, especially on the defensive side of the puck – what to do, what not to do – and he always gave me encouragement,” Doughty said.

Doughty also credited O’Donnell with offering positivity and avoiding frustration – which was perhaps difficult to bottle up in a season in which the Kings made strides but still finished in 14th place in the conference. Doughty led the team in ice time that season and was O’Donnell’s regular partner.

“I don’t think it was by accident that Dustin [Brown] was his roommate on the road, he lived with Matt Greene and we were partners not only on the ice, but we sat beside each other at home and on the road. I don’t think that was an accident,” O’Donnell said. “I think at the time Dean and the rest of the organization felt like I had been around for a while, Dustin would be a great guy to have as a roommate, and then living with Matt. So, you’re looking at three guys right there that I think helped shape Drew. Like I said, I don’t think any of us get credit for being as great a player as Drew is. I think we might’ve helped getting him there a little bit quicker, that’s all. I think Drew learned some really good lessons, and the one thing I’ll say about Drew, you teach him something once, it’s in there, it’s in the computer, and he can pull on it anytime. He’s an amazing student of the game, and he absorbed a lot quickly.”

Among the topics imparted onto the young, eager Doughty: how to behave as a rookie, how to treat veterans, how to balance a work and life equilibrium and best prepare your body for the rigors of an extended season.

“Just the way to become a professional,” Doughty said. “When I was a young guy, I had no idea how to become a professional. It isn’t probably until the last five years or so that I really did learn it, but I did watch a guy like him very closely every single day to see the things he did in practice, in the gym, and I remember them to this day.”

“I didn’t want to go in the gym ever, so he made me learn that to have a long, healthy career and play as many games as you can, you need to get in the gym and take care of yourself,” he continued. “He just taught me how to be respectful off the ice, always be good to the media, just be a good teammate first and foremost.”

There was, of course, O’Donnell’s role in the infamous altercation with Geoff Courtnall during Game 3 of the Kings-Blues first round series in 1998. With the Kings leading 3-0 in the third period and 11 and a half minutes from their first win of the series, Courtnall made heavy contact with Jamie Storr’s head while driving behind the Los Angeles net, causing it to whip back against the crossbar in a violent collision. The play occurred on a delayed Laperierre penalty against Los Angeles, so when O’Donnell was assessed a five-minute major for roughing up Courtnall, who had injured the Kings goalie but didn’t engage O’Donnell when lying on the ice, the Courtnall goalie interference penalty and Laperriere’s boarding call off-set, giving Al MacInnis, Brett Hull, Pierre Turgeon, Chris Pronger, Pavol Demitra and the St. Louis power play a five-minute third period major power play. They scored four times, winning Game 3, 4-3.

That’s a flashpoint moment but not an encompassing representation of O’Donnell’s impact or what he meant to the organization as an important figure, and it’s not appropriate that his Kings legacy disproportionately recalls that moment. There were a number of other processes that failed – Storr remained in the game despite an injury and the officials could have added an extra two minutes to Courtnall so as not to provide a five-minute major to a team that had run a goaltender, making significant head contact – in a high-tension episode in which a player was protecting a teammate.

“I guess you could say it’s the only smudge on my time with the Kings, but it’s something that I think the right thing was done. It just didn’t work out the right way,” he said. “I think if you look back, I think that maybe I could’ve done things differently, I’m sure if the referees, had they looked at it closely, could’ve done it differently. The coaching staff probably could’ve handled it differently, but it happened. They had a very good power play and they scored four goals on a five-minute major. I don’t know if we would’ve beaten St. Louis that series – they had a really good team. But when we’re down 2-0, that third game’s a huge game. It is what it is, and I still get teased by the fans – and I’m fine with it. It’s a long time ago and it’s water under the bridge, but it certainly is an interesting topic.”

O’Donnell will have some fun referencing it while addressing the Staples Center crowd later this evening in the pre-game ceremony. He’ll be joined by family, which will include his mother and sister, who flew in from his hometown of Kanata, Ontario. It’ll be appropriate pre-game pageantry to honor a player who played the game, as it is said, “the right way” and has served as a steadying and influential figure as both a player and as a member of the club’s development staff.

“He was never getting mad at me,” Doughty said. “He was encouraging me and teaching me in that sort of way. Any things I needed to go to him with, whether it was on-ice advice, off-ice advice, I went to him with it and he gave me the best advice he could. For my career, that was a huge trade for us, because without him, I would’ve been lost out there, for sure. O’D means the world to me, meant the world to me.” 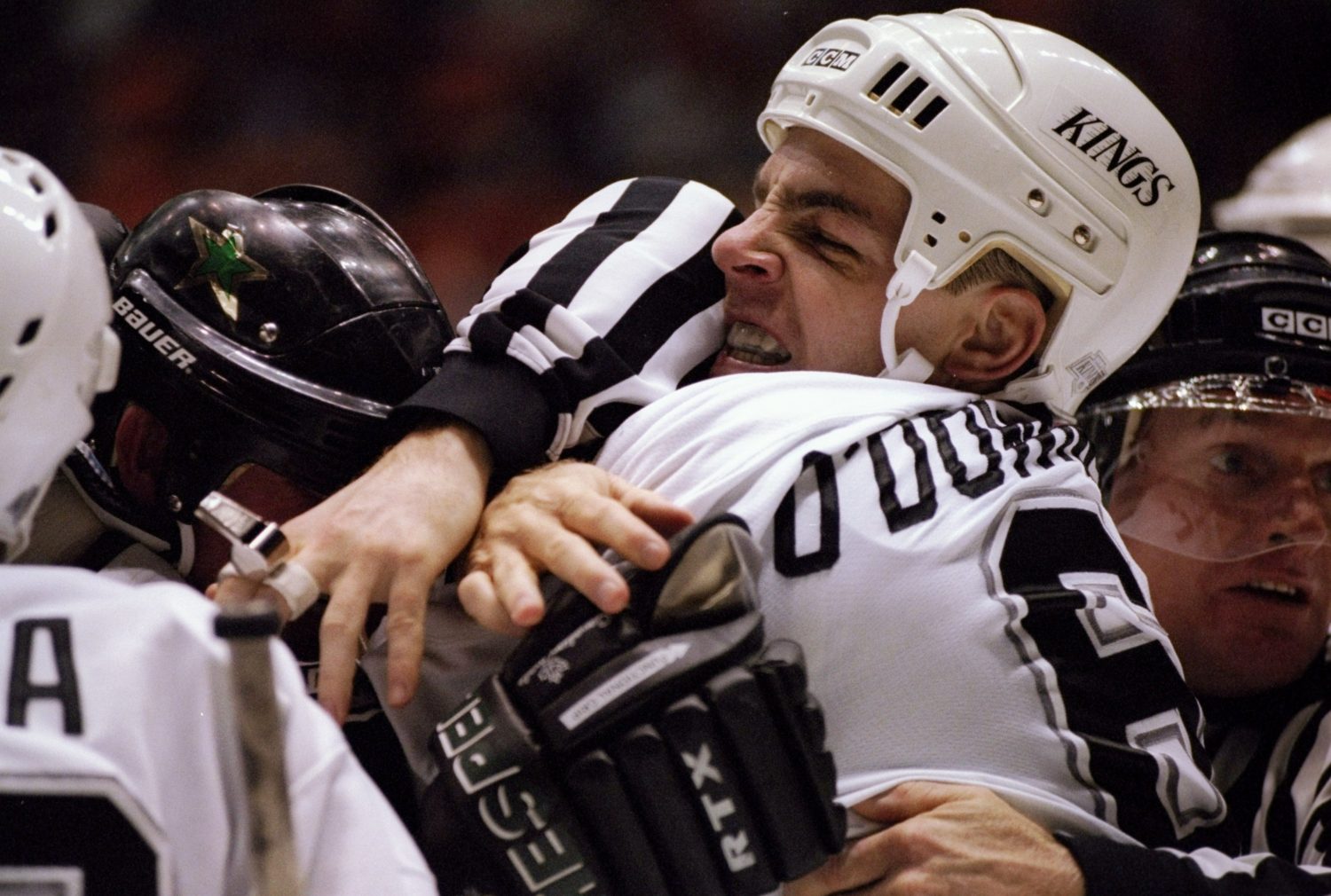