Waking up with the Kings: February 12 - LA Kings Insider

Waking up with the Kings: February 12

The Washington Capitals can both score and allow goals, and in an entertaining display of up-and-down playmaking, out-skilled and out-buried the LA Kings in the type of track meet game the visitors would have hoped to avoid. Los Angeles experienced defensive zone and transition lapses, but let’s face it, there was a pretty significant skill discrepancy on the ice; Washington has a good collection of high, high end forwards. Evgeny Kuznetsov, clearly threatened by Derek Forbort staking a claim as the most dynamic player from the 2010 draft – my word, that assist! – was back to his worldly zone entering and playmaking proficiency and was as dangerous as any opposing player in any game this season. The Kings didn’t help themselves out when Michael Amadio was whistled for a hook on a backcheck two minutes in, allowing Alex Ovechkin to set up in his office and wrist a puck from a sharp angle through Jonathan Quick. Quick wasn’t his best, and that was the most stoppable goal that he allowed on Monday, but that’s also Ovechkin’s 38th, and when you have 38 goals you’re very much capable of beating good goalies even when you don’t get your A-1 hammer on net. Credit the Kings for showing the resilience that served as a theme on the 3-2-1 trip and answering both Capitals goals with goals of their own before taking the lead on another Oscar Fantenberg long range shot early in the second. From there, Washington struck three times over the remainder of the second period, where they now lead the NHL with 74 goals, ultimately setting the stage for an anticlimactic end that followed a captivating opening 30 minutes of hockey. 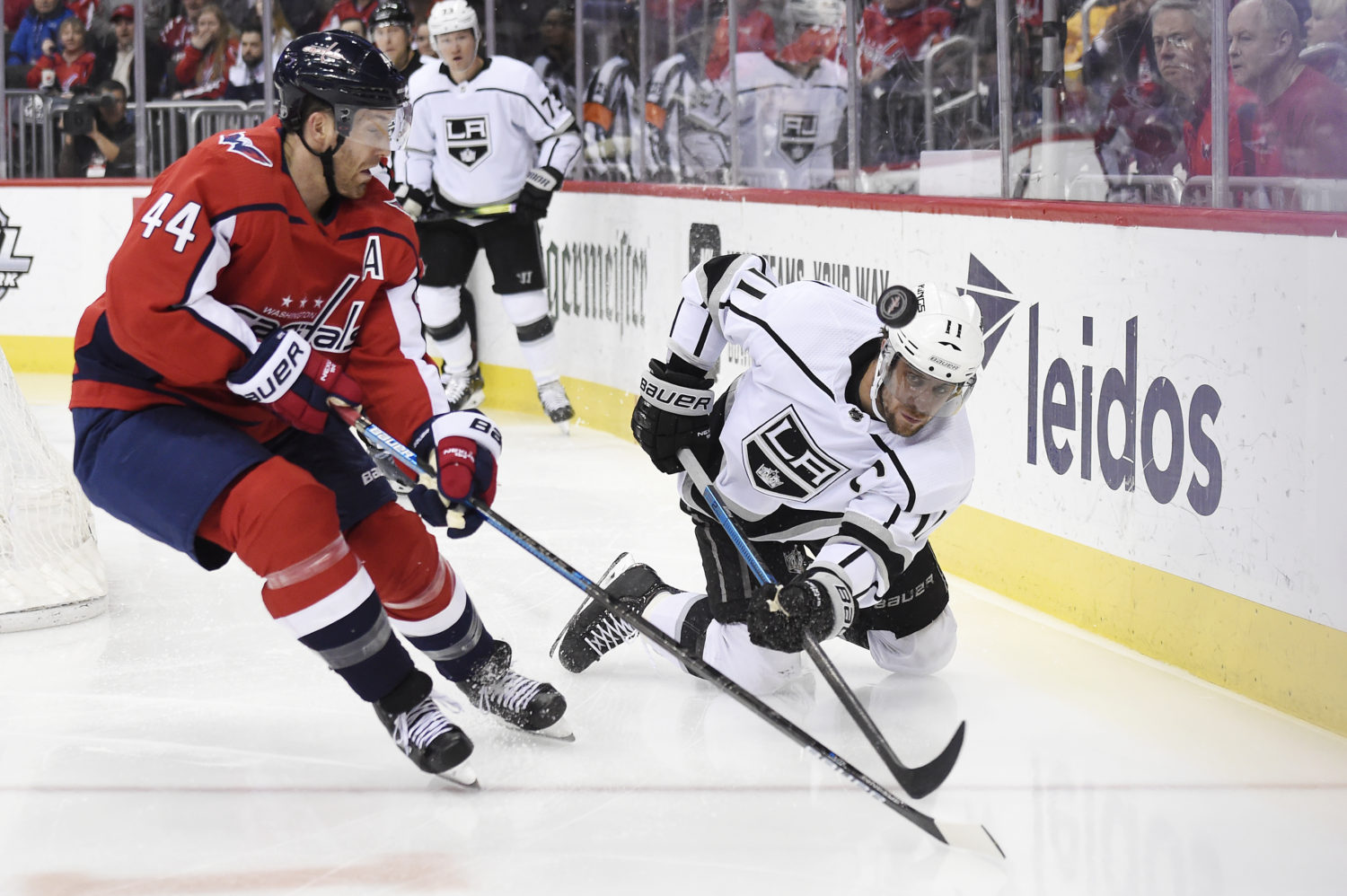 Austin Wagner scored on his first shift, less than five minutes into the game – and then logged only one shift for the rest of the first period, nine and a half minutes later. There was a penalty kill and a power play in there, but that’s still strange. That was the Kings’ fourth line scoring against the Ovechkin-Kuznetsov-Wilson line. On a breakout, Wagner confidently protected the puck, pulling it back behind a lurking Kuznetsov before issuing a diagonal outlet right onto the stick of Trevor Lewis. He dropped the puck for Clifford, whose purposeful end boards carom found an unexpectedly activating Forbort. His, um, no-look, between-the-legs drop to the crease was snapped home by Wagner. Perhaps there were efforts to shield Wagner from some of the highest-end players should those scenarios develop, but Wagner made a really poised play to keep possession of the puck from one of the game’s more skilled players and also scored later in the game when that same Capitals line was on the ice. In this game, Kyle Clifford was 21 CF/5 CA, and Lewis and Wagner finished 18 CF/5 CA, and all three were on the ice for both goals against the Kuznetsov line and no goals against. 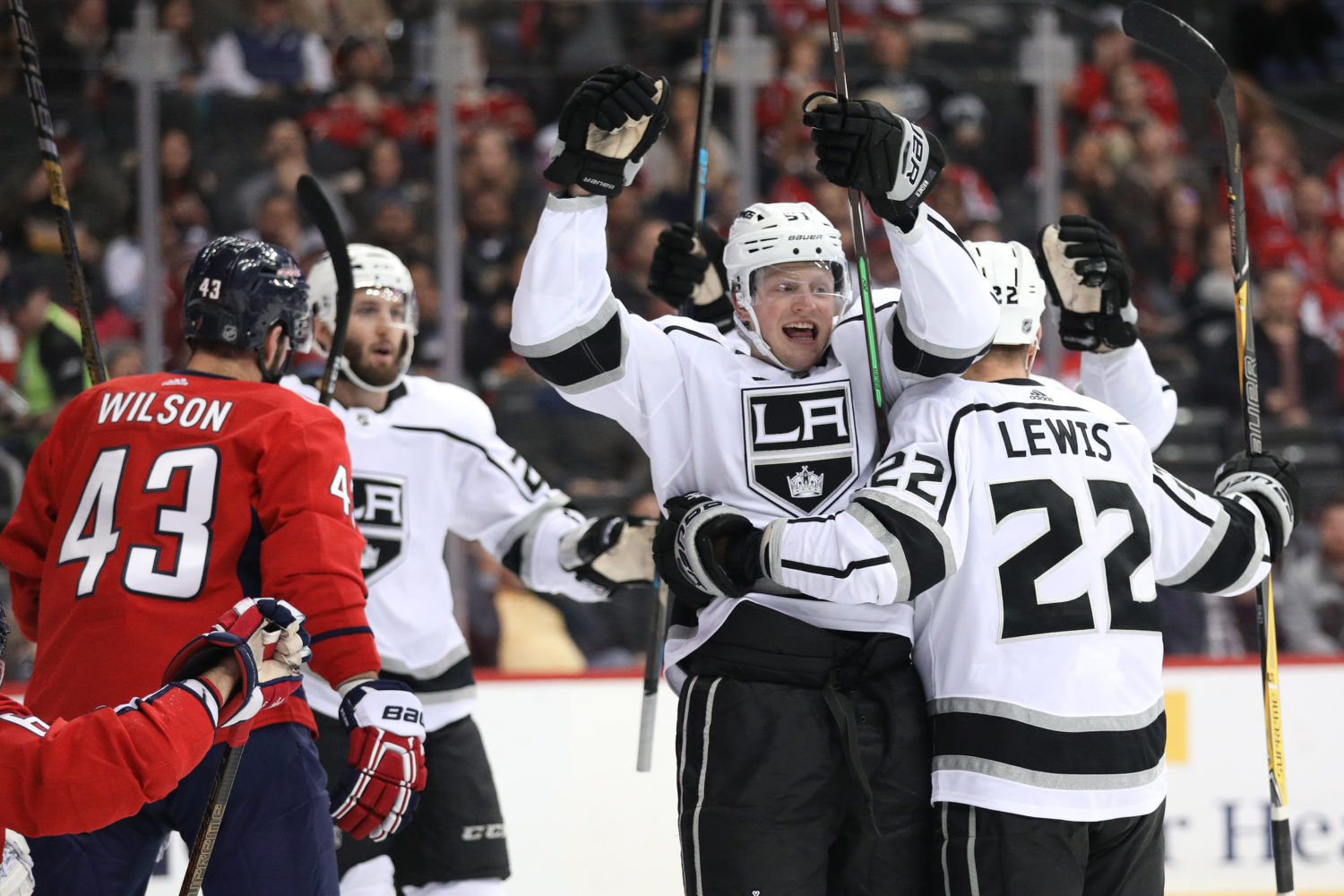 There was good fight and mettle in this game, the last of a six-game trip. There wasn’t a great deal of travel once the team was already on the east coast, but the physical wear and tear, while palpable this time of year, isn’t quite as cumbersome as the mental drain. This team has been through a lot this season. They played their way out of the playoffs a month into the season. There have been slogs – and then there have been slogs. They embarked on this trip having traded away someone who had been their best defensemen on a good number of nights this year, and they still found ways to win hockey games and put themselves in position to win in difficult buildings. The Kings aren’t going to finish in 31st place in the league, but this current spot is probably around where they’ll lay. It’s the most disappointing year by any real measure, and the number of goals they allowed on the trip, especially in the wake of the loss of Muzzin, as well as Thompson, who was more inclined to start a shift in the defensive zone than any other King, is concerning. But they showed their battle on this trip and a good commitment to practicing and playing with better structure and detail, even if Monday’s game got plenty loose. 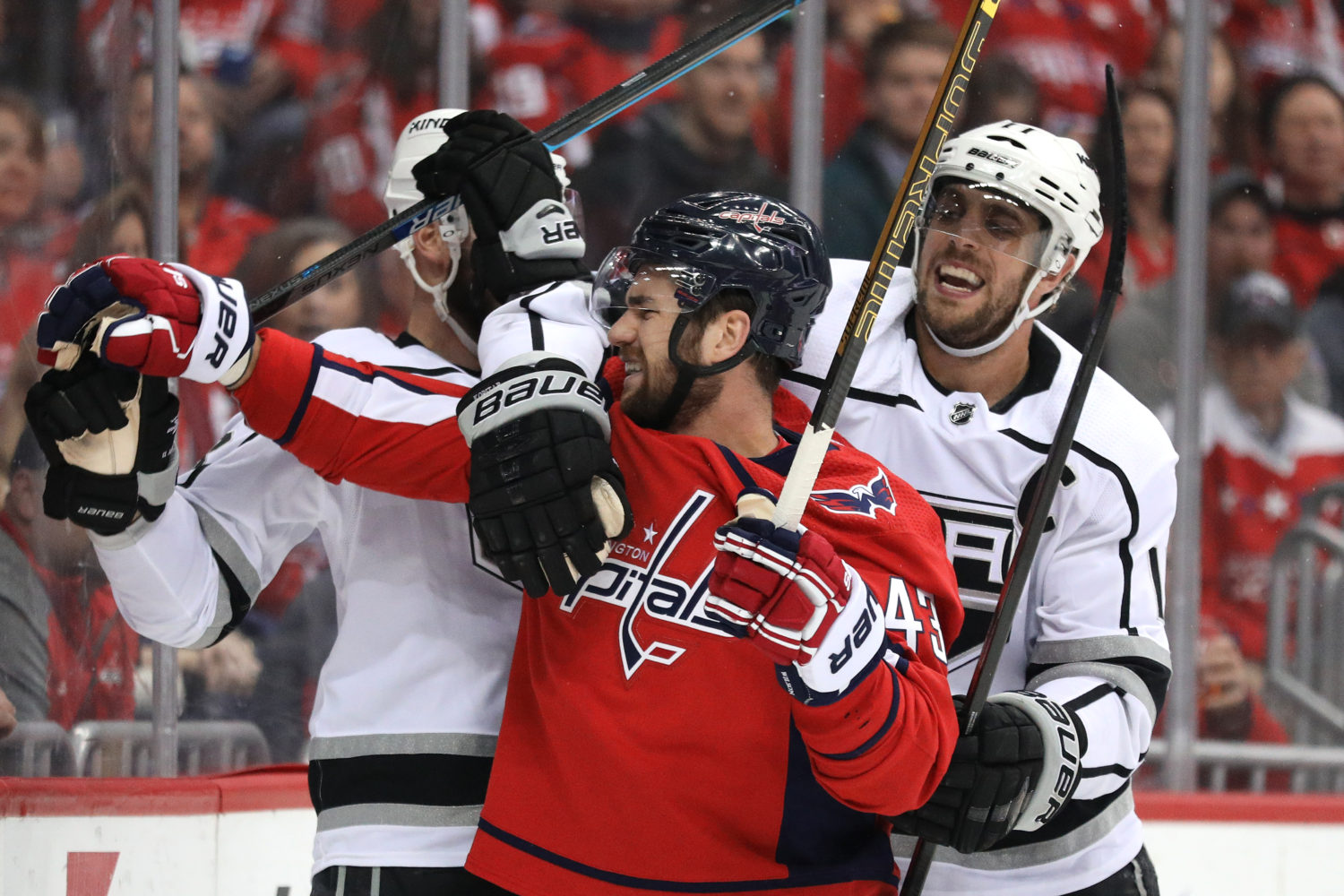