The LA Kings assembled on the TD Garden ice some 14 hours after Rajon Rondo’s buzzer beater, which continued so spark very complex emotions that as a Lakers fan I find difficult to properly describe. I saw the Lakers lose to the Timberwolves (clad in purple Prince-themed jerseys) over the bye week, and as Minnesota got into the bonus and was sent back to the foul line in a 13-point game, Rondo was whistled for an infraction that has pretty much always been a technical foul in basketball: he tossed a towel along the baseline, clearly timing it with Taj Gibson’s free throw in an attempt to distract the shooter. (Gibson made the free throw, and the Lakers lost by 15.)

On one hand, that’s funny! It was also amusing that it was met with a stiff and immediate rebuke by the officials, and who cares, the game was already out of hand. On another hand, that’s Rajon Rondo, who will have to go to farther lengths than others to endear himself to the Lakers fanbase, given his history with the Celtics, and hey, these are very Rondo-like antics. And then on some sort of third hand or appendage, he just returned to Boston and won an important game in a massive rivalry with a shot at the buzzer. Whatever feelings are summoned here likely require eight or nine syllables in German to properly convey. 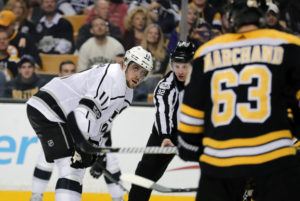 –Before getting into the nitty gritty, some updates: Jeff Carter (lower-body) skated on his own before the team’s practice. Willie Desjardins cautioned that he hadn’t talked to the trainers yet but also indicated that a potential return on this trip would be unlikely. “I know it was a short skate, so that to me wouldn’t be a great sign. I would think if he stayed out a long time it would be a better sign,” he said. Jonny Brodzinski skated and was not clad in a non-contact color.

–Matt Luff was assigned to AHL-Ontario. Luff has appeared in only two games since January 3 and has logged more than 10 minutes only once since December 18. Luff does have seven goals and 10 points in 30 games, but there had been a dip in his play, and since his last goal, the team has yielded an extreme number of scoring chances while he has been on the ice. He’ll fly back home and get into Reign home games Sunday, and then we’ll recalibrate when the Kings return home next week.

The NHL is not a developmental league, and Desjardins has imparted onto Luff multiple times that he believes he’s an NHL player. “I think he needs to get a little bit more consistent in his game. But that’s a hard thing at the NHL level. Everybody wants to play,” he said. Trevor Lewis is about to come off injured reserve, and with a crush in numbers up front, “it’s better to send him down and get him playing.”

–Lewis is probable to play Saturday but is not a lock. Decisions will be made this afternoon, and the adage that it’s not easy to change a winning lineup applies. But all signs point to Lewis getting back in for the first time since suffering a foot fracture when blocking a shot at a morning skate at the United Center on November 13. Should he return to face the Bruins, it will be his first game after a 37-game absence. “It wasn’t even a hard shot that hit me, it just hit me in the right spot,” he said.

“It sucks. It was a fluky injury, it’s frustrating. I had a little setback too there,” he said, referencing an injury that took some extra time to heal. “It wasn’t fun. It’s never fun watching, especially when you think you can be out there helping the team. There’s an end in sight now, so it’s nice to be back on the road with the guys and be around everybody and be in meetings again. I’m starting to feel good, too.”

–The Kings did not hold actual line rushes, so no hands were tipped towards tomorrow’s lineup. Never mind that! Desjardins confirmed that Dion Phaneuf will re-enter the lineup in place of Paul LaDue, and that Phaneuf, LaDue and Sean Walker are in a rotation in which two of them will play on any given night until the need arises for that to change.

Phaneuf came out of the lineup on Thursday, marking the first time in his career he’d ever been withheld from a game while healthy. This is a delicate situation, and for such a prideful player who has given so much to the game, it’s not easy for him to enter into this arrangement. Phaneuf has been nothing short of an excellent teammate and competitor and has an approach and work ethic that serve as a model for young players. But the discussion of Phaneuf as a “mentor” ended dead on arrival. He’s not a player/coach, he’s still someone working his absolute hardest to earn his minutes and help his team win.

“I’m not that old. I will say that – that I’ve got lots left,” he said. “‘Mentor,’ or whatever you want to call it, but I’ve got a job to do as well, and I feel good and I know I’ve played a long time, but I’ve got more left. Right now, it’s about working to get back in the lineup, and then when you get back in, you want to do your job.”

Likewise, it is difficult for Desjardins to broach this conversation with a 1,027-game veteran. “That’s a tough thing to do, especially when it’s never happened before,” he said. “So, I appreciate his character and his leadership. It’s something that’s the worst part of coaching.” But Desjardins also made the difficult decision to drop Ilya Kovalchuk down in the lineup and is now presented a challenge of working in Phaneuf, who scored his first goal of the season in Tuesday’s 5-1 win at New Jersey and has three points through 46 games, alongside a pair of younger defensemen with higher production rates who won’t benefit by sitting out.

“It doesn’t matter how I word it, that’s a tough conversation,” Desjardins said. “And the thing with them, we’ve started a bit of a rotation with three guys, so when I take them out, it’s not that I’m telling any of those guys ‘I don’t think you can play,’ and that’s the same with Dion. It’s not like I’m saying, ‘hey, you’re not good enough to play.’ That’s not true. He is good enough to play. But I need to look at some guys, I just do. We have guys who we’ve got to evaluate and find out exactly where they’re at, and so that makes for a tough decision. The thing I’ll say about Dion is he’s such a good pro. Once he found out he wasn’t going, for sure he’d have to be upset, but he went and got his workout gear and went and worked out right away. It’s like, ‘ok, I’m not going, then I’ll go work out and get myself ready,’ and that’s how he prepares.”

“It doesn’t mean those guys can’t get out of that rotation, good or bad, but for right now it’s a chance. I wanted to see Walker. I needed to get Walker in the lineup. Who do you pull out? All the guys are playing hard, so it makes it tough, but I needed to see Walker. That’s what you have to do. And we’re going to have those same decisions up front. Like, we’re going to have some tough decisions up front, too.”

For the time being, the point is moot. Phaneuf will re-enter the lineup Saturday afternoon and the season will continue with an attempt to win a fourth straight game. The communication of the current rotation has happened, and Phaneuf did his best to put his best foot forward in the working arrangement.

“I talked to Willie. It’s Willie’s decision. I talked to Rob. For me, I’ve got a job to do,” he said. “I come to work every day. It’s obviously something that I wasn’t happy about, but I respect the decision, I respect our team, I respect my teammates, and it’s all about winning games. I respect the decision that was made, and they were very open and honest with me about it, and I come to work today, and whenever I get in again I want to work as hard as I can for my teammates. That’s what it’s all about. It’s about being a professional, it’s about doing your job, it’s about respecting the game. I’ve been around long enough that I know it’s part of the business. You never want to be put in that position, but it happens. It’s part of the business, and I accept their decision.”

–Rise and shine: LA Kings Live starts at 9:30 a.m. Saturday morning. Matt Grzelcyk is out and Tukka Rask will start in goal, per Joe Haggerty of NBC Sports Boston. Patrice Bergeron will be presented with his silver stick for playing in his 1,000th NHL game, which should provide some excellent pageantry at an Original Six center. Per Haggerty, we could see forward groupings of Marchand-Bergeron-Heinen, Cehlarik-Krejci-Pastrnak, DeBrusk-Frederic-Backes and Acciari-Kuraly-Wagner with defensive pairings of Chara-Carlo, Moore-McAvoy and Krug-Miller. Jonathan Quick was the first goalie off the ice for the LA Kings at today’s practice and should be projected to start in goal against Boston.

Jeff Carter, Trent Frey and Miles Hirayama take a glance up at an impressive array of banners during a pause in Carter’s solo skate.