Goaltender Cal Petersen will return to play in his home state for the second time in his professional career tomorrow evening, as the Reign visit the Iowa Wild for the first of two games in Des Moines.

The Waterloo, IA native is the first from his hometown the reach the AHL, let alone the NHL, and is one of just three Iowans all-time to play at the NHL level (Scott Clemmensen, C.J. Smith). Growing up as a young goaltender in Iowa, Petersen said that he was always aware that Clemmensen was that trailblazer to reach the pinnacle of hockey as an Iowan.

Last season, Petersen made his professional debut with the Reign at Wells Fargo Center in Iowa as the Reign fell by a 3-0 final against the Wild (including an empty net goal) as Petersen turned aside 25 of the 27 shots he faced. Interestingly enough, Petersen’s professional debut came in the same building where he had previously watched another debut, the first ever Iowa Stars home game, then the AHL affiliate of the Dallas Stars.

“I never played [at Wells Fargo Arena growing up], but I actually went to the first pro game that they had there when it was the Iowa Stars,” Petersen recalled. “I went to their opening night back when they were the farm team for Dallas.”

On October 6, 2005, the Stars lost that night by a 5-4 final against the then St. Louis Blues affiliate, the Peoria Rivermen – In net that night for the Stars was current Calgary Flames goaltender Mike Smith, with several future NHL players also on the ice that night before more than 8,000 fans.

Petersen added that the Iowa Stars’ home opener was the only AHL game he went to in Iowa as a fan, saying that he mostly attended Waterloo Black Hawks games in his home town. The USHL team, for whom he would later play three seasons for, play in an arena that Petersen correctly estimated holds close to 4,000 fans (3,500) and added that the Black Hawks were a “pretty popular attraction” in his home town.

The trip from Waterloo to Des Moines is approximately a two-hour drive and the close proximity will present a large hometown cheering section this weekend for the visiting team. While Petersen noted that his parents have been able to see him and see him play, and his recent stint with the Kings presented some closer trips, this weekend’s game in Iowa will provide a chance for friends and family that he isn’t able to see as frequently with a chance to see him play in person.
“It’s awesome,” Petersen said. “I’ve been fortunate, at least the last couple of weeks with getting called up, [my parents] were able to make a few more games. They really put in a good effort to see me, but for me to come the other way and make the travel a little bit easier on them it’s really special and we’ll get some friends and family that don’t normally get to see me come out to a game so that part’s going to be really cool.”

The rarity of an Iowa native reaching this stage still isn’t lost on Petersen. Being, as mentioned above, one of just three players from his home state to reach the NHL level is something that has resonated with Petersen, who considers himself fortunate in his path to professional hockey.

“It’s really cool, it’s a testament to having a lot of people help me along the way,” Petersen said. “The biggest challenge with guys coming out of Iowa is there’s not a ton of resources, it’s still and up and coming hockey state. I was really fortunate, to be able to find the right resources to help me progress my game and make some sacrifices that normal people maybe wouldn’t have made to get to this level.”

Petersen and the Reign are traveling to Iowa today. Ontario will take on the Wild in a back-to-back set this weekend, on Friday at 5 PM Pacific and Saturday at 4 PM Pacific. 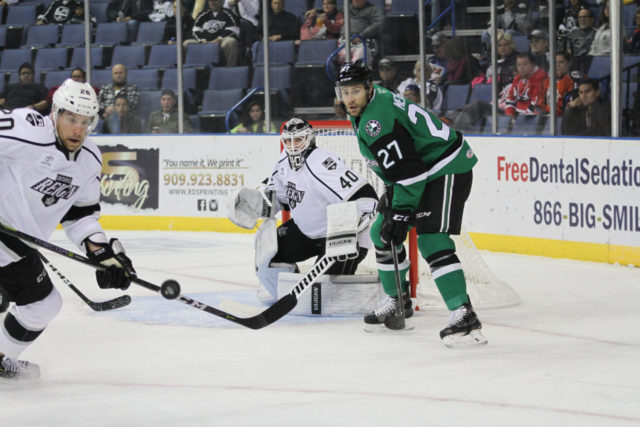