Can Kempe develop into a reliable power play figure?

Adrian Kempe has spent a total of 153:24 of his career to-date manning a position on the power play. Through that time, he’s scored one power play goal – an end-boards put-back of a Marian Gaborik shot that registered as the third and final power play goal scored after Pat Maroon, then with Edmonton, shouldered Drew Doughty in the head and was assessed a five-minute major and a match penalty in a game at Rogers Place on January 2, 2018.

Kempe, who is also looking to boost his even strength scoring, is vying to cultivate his power play role, which as of late has been to set up on the half-wall, opposite Alex Iafallo, on a second unit that also includes Tyler Toffoli, Brendan Leipsic and Jake Muzzin.

“The half-wall you do both because it depends which way the puck’s coming,” Willie Desjardins said. “The one side, you’re setting it up. If it’s on the other side, it’s kind of a seam play, so you’re the one attacking. I think that’s the upside of his game.”

Leipsic has never been a prolific power play producer in his career and is yet to record his first NHL power play goal. But some of the data, asterisked by a small sample size, indicates that the second unit, which didn’t score until Matt Luff’s goal against Vegas on December 8, has seen an uptick in production.

That’s yet to move the statistical needle with Kempe, whose career 5.87 on-ice five-on-four goals-for per 60 minutes is the second-lowest of any club forward since 2016-17 to earn a regular power play shift. (Only Toffoli’s 5.65 GF60 is lower.)

And that’s somewhat unexpected, because Kempe had been a prolific power play specialist as he combined for five power play goals over his two World Junior Championship campaigns in 2015 and 2016. The 2015 tournament, in which Kempe had only recently turned 18 years old, served as a major breakthrough. Skating at full strength with Axel Holmstrom and Oskar Lindblom – and occasionally on the man advantage with William Nylander – Kempe totaled four power play goals and eight total points that year, tying for ninth place in tournament scoring. The next year he recorded one power play goal as part of eight total points that ranked 10th at the tournament. Sweden finished in fourth place both years.

“If you look at where he was at World Juniors and how he played, I don’t think he’s quite hit that spot in the NHL, and it takes all guys time, so that’s not unusual,” Willie Desjardins said. “But I still think he has an upside to his game, which is great to us.”

Even before the team reaches the offensive zone, Kempe’s pure speed could serve as an attribute that allows his unit the ability to enter the zone cleanly and set up the man advantage.

“We’re doing all different kind of breakouts,” Kempe said. “Usually I’m the guy they want to give the puck to so I can use my speed and carry it in and try to make plays to set it up.”

Driving up the team’s power play rate may be a fruitless endeavor this year, even as Los Angeles’ special teams have shown signs of stabilizing. The power play still ranks 27th in the league but is a respectable 5-for-26 over the last 11 games. While the lack of pure skill and regular finishing might put an overall clamp on the man advantage this season, there’s still room for a higher ceiling should Kempe be able to grow and add layers to his game that could benefit the group and shore up the second unit next season.

“He’s a skilled guy,” Desjardins said. “I like where he is right now – he comes down the side. I like the movement on that power play. Right now, he’s probably a second-unit guy, but at times I think that unit’s been very good, so I think he’s fitting right in.”

Of course, whether or not Kempe is able to grow into a power play role isn’t the most pressing question directed towards his play. With five goals and 12 points in 43 games, he’s well off his 37-point pace from a season ago, so before we start talking about where he fits in the man advantage, he’ll still look to establish himself as a player capable of scoring in any situation.

Adrian Kempe, on his ideal power play placement:
It doesn’t really matter if I’m on the right or the left side. I kind of like the side that I’m playing right now, too, because I’m trying to find both A.I. and Muzz for one-timers. I don’t really care which side I’m on, but I like to be that guy on the half-wall that can make plays and shoot the puck, too.

Willie Desjardins, on Adrian Kempe’s skill level:
You look at where he was in World Juniors, and you’ve got to kind of project the same thing for here. For me, it’s the upside. Everybody has to work at it to get there. It’s not like it’s unusual, it’s not like it happens right away. But I think he’s getting more and more confident in the league. I like the spot he’s in right now. With Hagelin on the line, an older, veteran guy that can help out a little bit, and Toffoli, I’m expecting good things for that line.

Desjardins, on whether Kempe’s speed foretells of improved power play set-up:
Yeah, but you do that now with him. He’s a guy that’s bringing it up from behind, so he is a guy that we look at for that role. And he does have that skill, for sure. 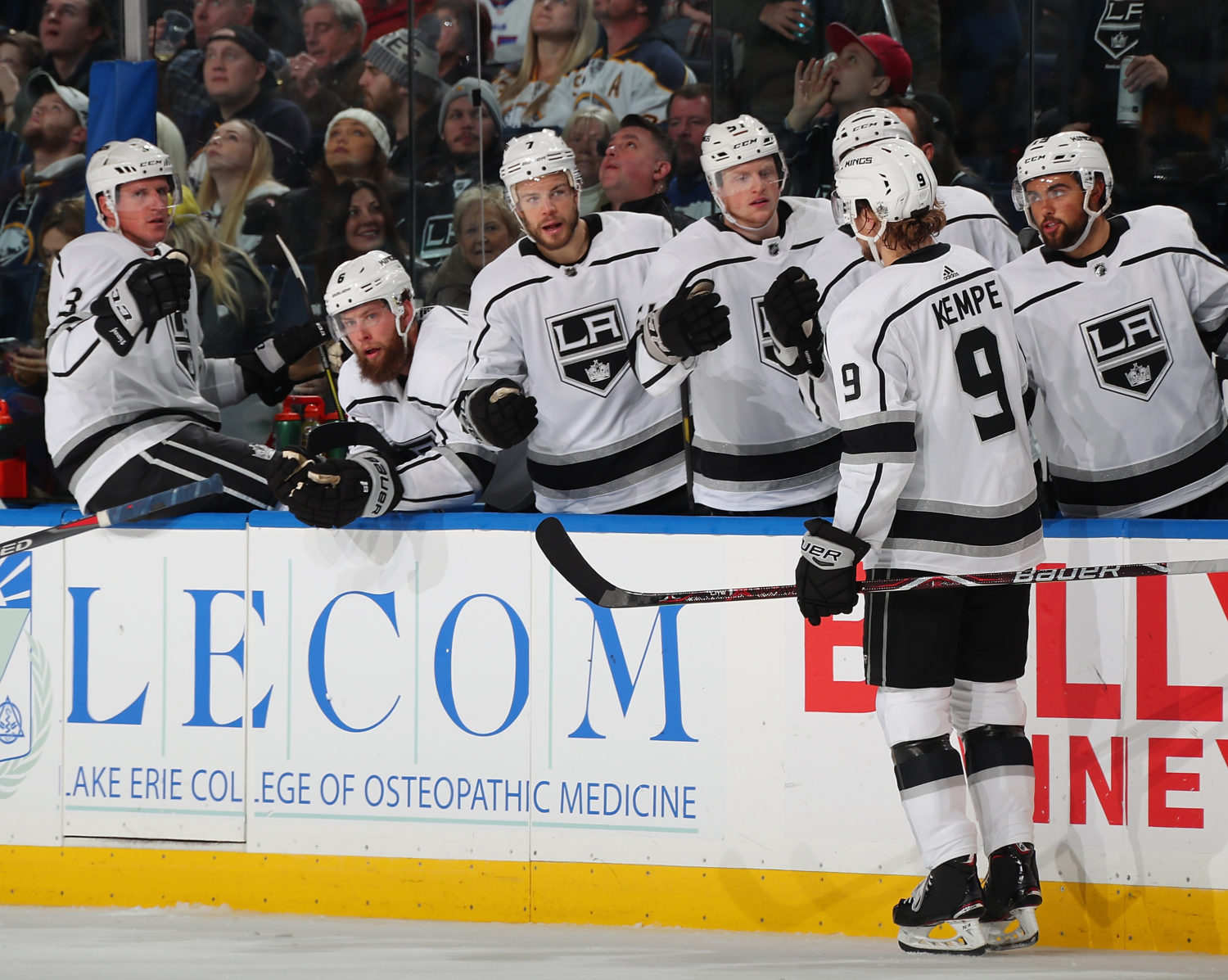