The Ontario Reign fell for the fifth straight game in a 4-1 defeat against the San Diego Gulls. The Reign played a strong opening 40 minutes but ran out of gas down the stretch, conceding twice in the third period while registering just two shots on goal across the final 20 minutes.

Ontario got a second-period tally from forward Mike Amadio, a power-play goal, as the Reign moved back to within one late in the middle stanza. Peter Budaj made a season-high 39 saves, turning in a solid effort in net, but the Reign were unable to end their losing streak, which reached five games, with nine losses from their last 10 games played and no regulation wins in their last 13.

A relatively even opening 20 minutes looked destined to enter the first intermission scoreless, but the Gulls capitalized on a turnover in front of Budaj with just 33 seconds remaining in the opening stanza, with Troy Terry feeding Sam Steel for his seventh goal of the season.

San Diego capitalized again, this time inside the opening minute, with a goal 24 seconds into the second period. Max Jones buried a one-timer from the slot, off of a feed from forward Sam Carrick, for his 11th tally of the season, and Ontario trailed 2-0 with goals less than 60 seconds of game action apart.

The Reign used a 94-second, 5-on-3 penalty kill to build momentum throughout the latter half of the second period, culminating with a Mike Amadio goal less than five minutes from the break. Amadio picked up a secondary opportunity off of a Matt Moulson shot, burying it at the near post for his first goal and fifth point of the season at the AHL level.

The Gulls, however, took over in the third period, scoring twice to close out the 4-1 victory. Carrick struck first, with a goal just 3:33 into the final period of regulation, his 18th tally of the season. Terry then completed his multi-point evening with his 15th goal 6:21 from the final buzzer.

Ontario is off tomorrow, before a Tuesday practice, which precedes a road trip to San Jose for a pair of games against the Barracuda, beginning on Wednesday evening at SAP Center.

Brett Sutter on his frustration level on the current stretch of games
No one likes to lose, obviously. Guys aren’t happy in there but, I mean, there’s nothing you can really do other than keep fighting, keep trying to get better. Like I said, no one likes to lose and that’s just where we’re at right now.

On if there’s anything he is doing as a leader to try and keep the mood from being down
You‘ve just got to come to work every day and give it all you’ve got. That’s all you can try to do. It was another tough loss tonight. I think we’ve been getting better, but it’s hard to win when you’re not scoring goals. Just keep working to get better and we’ve got to break out of it.

On a dip in the third period, after a solid opening 40 minutes
You know what, I don’t know. That first one was tough, obviously, I thought we had a real good first 40 minutes, gave ourselves a chance and then they get that early one. I think after that, you almost start cheating, pushing for those goals and the game kind of fell apart from there. We’ve got to stop putting ourselves in those positions, start playing with a lead, start scoring more goals. Our goalies are giving ourselves a chance every night. We’re not far off, but we’ve got to start finding ways. Talk is cheap.

Mike Stothers on whether he felt the team ran out of gas in the third
Maybe. I don’t know. They scored that goal and it seemed to take the life out of us. It was a hard-fought game, for like you said the first 40 minutes, but I don’t know whether it was the third period, back-to-back games, short turnaround, six o’clock to a three o’clock. They were the fresher team it looked like.

On what the team can do to score more goals
Well, there’s some guys that score more naturally than others and some teams have a lot of them and some don’t. So, if you don’t have a lot of natural goalscorers, you’ve got to create goals and get some ugly goals and we’re not giving ourselves a chance by even getting the ugly ones. We’re not ready for a rebound or a pass, we take too long to get the shot off, we miss the net, we skate by the net. There’s some guys that just have a gift, they can just throw the puck at the net and it finds a way to go in. We don’t have guys like that. So, you’ve got to stop thinking and visualizing that you’re going to score the pretty goal that’s going to get you on the TSN highlights of the week, because it’s not going to happen. Just get an ugly, gritty goal. Just get a point shot through to the net, have some traffic in front and you score on a rebound on your power play like Amadio did. Is that going to make TSN’s Turning Point this week? Is that going to make ESPN’s highlights? No, but it’s effective. 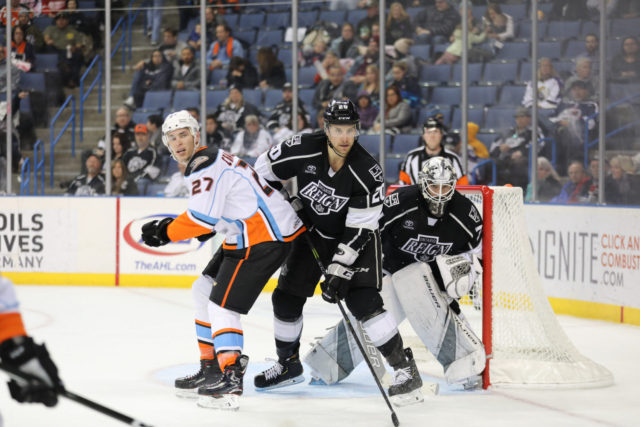 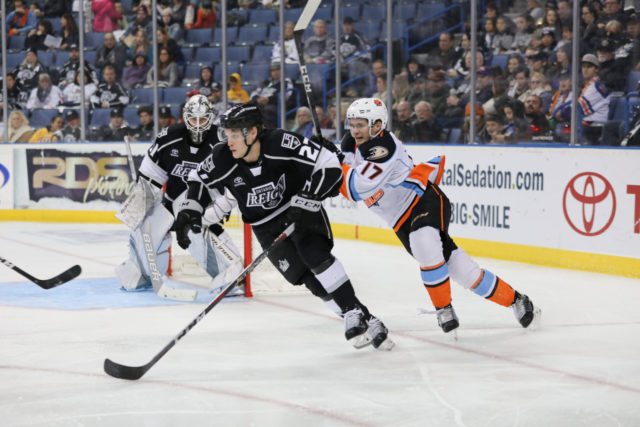 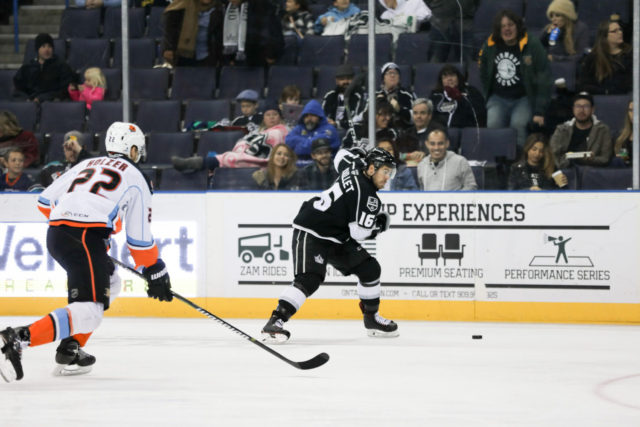