INSIDERS. A good afternoon to you from El Segundo. Several quick notes from Toyota Sports Center, where the Reign practiced at 9:00 a.m. – more on that shortly – followed by a skate including Kyle Clifford, Jonny Brodzinski (IR / shoulder surgery), Carl Hagelin (IR / knee sprain), Alec Martinez (IR / upper-body) and, ultimately Derek Forbort. After the Zamboni cut the ice, a larger group including the aforementioned skaters took part in a practice that gave way to a heavy amount of skill development. Both Jonathan Quick and Jack Campbell took the ice.

–Hagelin and Brodzinski were in red no-contact jerseys, while Martinez wasn’t. This wasn’t a practice with any real contact, so don’t pay attention to the color on Martinez’s jersey. He’s still effectively a no-contact guy, and though he’s improving, his return isn’t imminent. Hagelin, meanwhile, isn’t expected to play against Tampa Bay, “but he’s real close,” according to Willie Desjardins.

–I’ll have a story on Kale Clague either tonight or tomorrow morning. Clague, the team’s second round pick from 2017, just finished up a highly encouraging December in which he posted seven points (1-6=7) in 10 games and has demonstrated a real surge in confidence as players have been called up to the Kings and his role has grown. “You know, you always hear ‘confidence,’ and I think unless people have played, it doesn’t really matter what you do – when you’re confident going in you do things,” Sean O’Donnell, Player Development said. “You don’t think too much, you just do it because you’re like, ‘I can do this right now,’ and he’s making plays at the offensive blue line that you really can’t teach. He’s doing shoulder shakes and shimmies and he’s leaving guys behind him and you don’t do that if you’re squeezing your stick or you’re thinking too much, so I just think that he’s been put in situations now where he’s getting on, goalie’s pulled last minute and he’s the defenseman out there, power play, five-on-three, he’s the guy out there, and players feel that and he’s taking it and running with it, and I just think his confidence offensively is real high right now.”

27. Like the NHL trying different outdoor locations. It is no longer about the TV audience. You go and have a great time. It’s very hard not to have fun on them, you really have to be a Debbie Downer. Regina will be terrific. Dallas is a bit more of a gamble, but I’m intrigued by the league waiting to see who the opponent will be. Las Vegas had strong TV numbers for this year’s classic, making the Golden Knights a surprise contender. But if the league goes to West Point — which would complete the military trifecta — owner Bill Foley’s Army history might mean the Knights go there. Colorado likely gets Los Angeles for its game at Air Force.

The Stadium Series game will be played at Falcon Stadium on Saturday, February 15, 2020. Colorado previously hosted a Stadium Series game on February 27, 2016, falling 5-3 to Detroit. Los Angeles has ties to the area through owner Philip Anschutz; the Kings faced the Avalanche in a preseason game at Broadmoor World Arena in Colorado Springs, where the Air Force Academy is located, prior to the 2014-15 season.

–Wednesday’s practice was highly attended for an “optional” in the midst of a three-in-four. Among those to take the ice was Jack Campbell, who had scant rest during a performance Tuesday in which he stopped 46 of 47 shots. “Yeah, just working on my game,” he said about taking the ice the next morning to get work in. “It was nice to get back out there, but I’ve still got a lot to get better at. So just come out today, a couple guys staying out for extra work, and we just are all trying to get a little better. So, it was good.”

Campbell noted that his early lunging save on Jonathan Marchessault was a welcome-back moment that allowed him to find his game after he had missed 24 straight due to surgery to repair a torn meniscus in his knee.

“To be honest, in the first I was so excited I was a little shaky, which you know, I wasn’t seeing it very well,” he said. “And then kind of made that save on Marchessault back door and then it kind of settled in and then I was tracking it well. So, you know, it’s just one of those things, you come back, I kind of needed one or two plays to be like, ‘alright, I got it.’ And then obviously the guys boxed out and cleared my rebounds out early – that was huge – and then that kind of allowed me to settle in the game.”

All Kings will be active in the quarter-finals. Today, Johan Sodergran and Sweden are currently underway against Switzerland, while Markus Phillips, Jaret Anderson-Dolan and Canada face Rasmus Kupari and Finland at 3:30, and Mikey Anderson and the United States face the Czech Republic at 5:00 p.m. 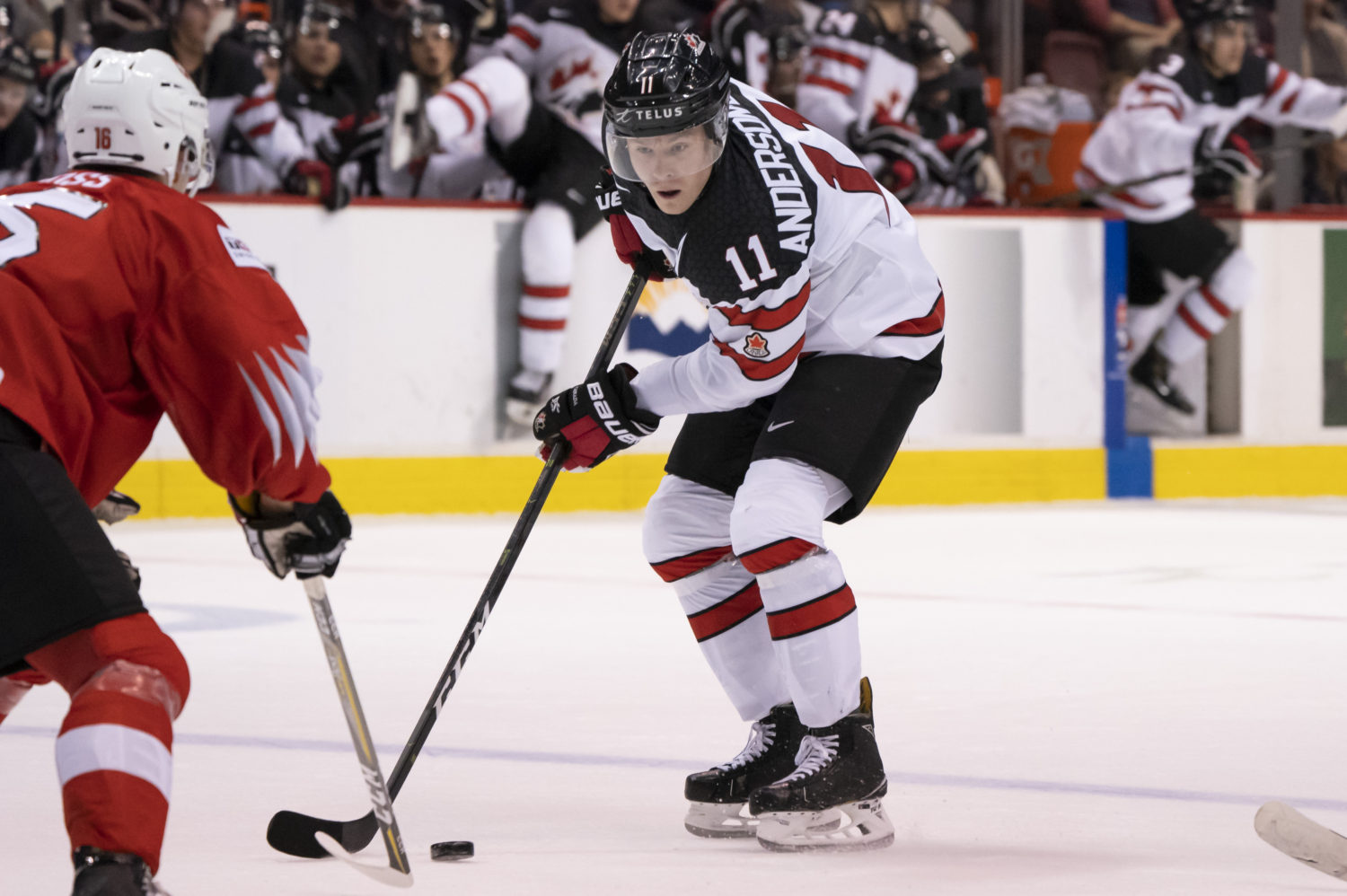 Willie Desjardins, on what he’s liked about Sean Walker’s performance:
I like his mobility. He gets back to pucks quick. He’s been able to join up on the rush. Basically, his puck-moving has been good, and his attitude, too. He comes every day working hard and ready to get better.

Desjardins, on how he uses the film of Tuesday’s game:
No, there’s good and bad. You look at the first period, we were pretty good in the first period. For me, of you can ever be good for a part of a game, there’s no reason you can’t be good for the whole game. We’ve got to look at that and realize that we can play well, and I think fatigue was a factor, for sure. I think in the first period, on our screen we had like 30 breakouts. That’s way, way too high. Your D are going to get tired by the end of the night. They’re not going to be able to get up in the play, they’re not going to be able to do the things you want, and they wore us down. We’ve got to look at them, too. They’re doing things right, and maybe we can adapt some of those things to our game.

Desjardins, on Jack Campbell’s performance Tuesday:
I could tell you it was just average, but [laughs]. It was pretty good. I would hope – I’ve seen Jack before. They’ve done a great job with Jack. Dusty, he did a really good job with him down in the minors, getting him ready for this spot. I’ve been excited to see the difference in him since I first knew him this year, since I first had him five years ago or whatever it would be, and every situation, he’s responded well. When we lost Quickie, he had to be able to carry it when he did. He stepped up and did it. We knew last night would be a tough game. It’s not like we were going in there thinking, ‘well, this is going to be an easy game for us.’ Back-to-bacl against a good team, so it was a game that didn’t set up all in our favor, so we knew we’d need good goaltending – but that was exceptional goaltending. And not just his goaltending, but the way he handled the puck was great, as well.

Desjardins, on any inkling Dusty Imoo would be a coach when he played for him in Japan:
I was kind of surprised as a goaltending coach. To tell you the truth, I didn’t see that in him. It was good I worked with him. He was a great goalie for me. He was a high-end in-a-game player – he was a guy that always got better in games – but I never really saw him being that kind of student of a game where he wanted to keep doing it. But it’s good to see him, and he’s done a great job, and the guys he’s worked with, you see they’re getting better, so it’s a real complement to him.

Desjardins, on Campbell’s growth from when he had him in the American Hockey League:
I don’t think you could put it in as a word, but he was an OK American League goaltending, and now he’s a good NHL goaltender with an upside. Like, he can still get better. Back then, he took over my starting goaltending down in the American League for a real short period of time, and then he got hurt. So, he just showed that he was just on the verge of becoming a starter down there. … It’s really great to see his game develop to this level and just how he’s matured.

Desjardins, on players he had coached that he felt had a good coaching makeup:
You always see lots of guys that you think could be that way. I had Alex Burrows, he’s going to go that way. Fiddler in Dallas, Kevin Bieksa, he was a guy that I could see him being a good coach down the road. There are quite a few guys – Dan Hamhuis – like I said, there’s lots of guys when you go through and you watch him, ‘yeah, this guy could become a pretty good coach.’

Desjardins, on Tampa Bay being an “outstanding team”:
It seems like that’s all we get is outstanding teams. Like, our schedule of late has been such a hard schedule. It’s very possible going into that schedule and not coming away with a lot, and if that happened, it would be so bad, but guys found a way, and I’ve got to give them a ton of credoit. Those were tough games, and they found ways to get points. So this game’s another game where we have to be on top of our game. If we’re going to get points, we have to be on top of our game. That’s our challenge.

Toffoli now credited for an assist after winning the puck prior to Muzzin’s stretch pass; Quick also picks up a helper. pic.twitter.com/twRNV6Arev