When the LA Kings signed defenseman Sean Walker to an entry-level contract after he had played his first professional season on an AHL deal with the Ontario Reign, one aside by a team executive caught LA Kings Insider’s ear. “We can’t recall him if he doesn’t have a contract,” it was shared of the former Bowling Green captain.

At that moment, it was clear that the team saw Walker, now 24, as someone who was going to play, potentially as a call-up midway through the 2018-19 season. And, as the Injury Tree has been shaken quite vigorously, Los Angeles has dealt with the absences of Alec Martinez, Dion Phaneuf and Paul LaDue, all of whom are capable of playing on the right side, thus intermittingly opening a door for Walker.

Walker’s yet to fully launch himself through that door with two assists and a minus-three rating over 12 games in which he’s averaged 14:34 of ice time. But, he’s taken advantage of some shielded zone starts to lead the blue line with a raw 55.5% Corsi-for, and while the team hasn’t been at its best in the win over Arizona and the loss to Vegas, Walker acquitted himself well, earning an assist on Anze Kopitar’s goal against the Golden Knights in which he ripped a one-timer at the net that the L.A. captain cleaned up after the puck was knocked down by Malcolm Subban. He’s recently been playing high-teens minutes and is coming off a career-best 18:44 in Saturday’s loss.

“I think I’ve been skating really well lately and making that first pass clean and joining in when I can,” he said. “Something that they tell me they want me to do is join the rush whenever I can, so I think lately I’ve just been more comfortable and confident doing that, so I’ve been trying to do that a little more often.” 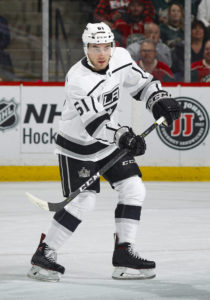 That was certainly a plan that worked in Los Angeles’ favor on Thursday. When the Kings were activating their defensemen – as they did regularly in the first period – they generated scoring chances and secondary opportunities. But while it’s promising that Walker has begun to carve out a little bit of a niche, his primary role as a defender will still be to keep the puck out of his own net, and even though he’s operated with a significant possession advantage, he’s in the red in both on-ice goals for and against as well as high danger chances, according to Natural Stat Trick. The transition to battling with NHL players as opposed to NCAA or AHL players has been a challenge that he’ll have to overcome if he’s to maintain a regular spot in the lineup.

“That’s harder for him. That’s something he’s got to learn,” Willie Desjardins said. “He’s not at the top of that part of his game, it’s probably a weakness right now, but he can get better at it.”

The NHL is getting smaller and faster, so the 5-foot-11 Walker’s entrance should work alongside league trends. And while he won’t be able to compete with pure brute strength when he goes up alongside, say, Ryan Getzlaf, there are still those whose positioning, poise and awareness make up for shortcomings in size and defensive zone battling.

“You look around the league, there are a lot of small D that do well,” Desjardins said. “[Minnesota’s Jared] Spurgeon is a guy, so size isn’t a factor. You’ve got [Troy] Stecher, you’ve got [Alex] Biega in Vancouver, so there are guys that can play, and I think he’s adding to our game. That side of the game, he’s going to have to learn a little bit. Positioning’s the key – he’s got to get in good position.”

Positioning – along with poise and escapability – has been an inherent part of Spurgeon’s game. Signed by Minnesota to a two-way deal during development camp in 2010 after he went unsigned by the New York Islanders, who’d selected him in the sixth round in 2008, Spurgeon, listed generously at 5-foot-9, has averaged at least 21 minutes in eight of his nine NHL seasons and has appeared in 546 games. He’s among the most adept in the league at retrieving pucks and avoiding mistakes. Walker, meanwhile, is capable of both passing and skating the puck out of his zone with speed, and while he doesn’t possess the same defensive zone wherewithal as Spurgeon, profiles as a player comfortable in the offensive zone and willing to put his skating and shot-readiness to use.

Sean Walker, on the development of his game:
You know, I think definitely getting out there with Muzz, he’s an amazing player and he’s easy to play with, so we go out there and we both think the same things and we both want to get up the ice, so if I’m going, he’s covering for me and if he’s going, I’m covering for him, so we both have the same mindset.

Walker, on his main focus when shooting from the point:
Definitely [shooting] past the first guy. You know, in this league, there’s definitely going to be layers of guys that are trying to block shots, so I think for the most part at the offensive blue line you’re just trying to make sure you get it past the first guy and hopefully you can get a high tip or squeak through. But everybody is so defensive and everybody is willing to block shots that there’s always a second layer, so I think the main thing is trying to get it past that first guy, and obviously if you have a clear shot, try and get it right to the net.