Insiders. A very happy Friday night to you all. The Ellen DeGeneres Show Executive Producer Andy Lassner is a massive Kings fan and will be the celebrity guest-slash-neurotic Jew on tomorrow’s Hockey Night in Los Angeles broadcast, part of a busy day of programming as FOX Sports West celebrates its second Hockey Day SoCal. On the docket are Kings and Ducks games book-ending a televised game between the 16AAA Junior Kings and Junior Ducks as part of 10 hours of programming that will also include Derek Armstrong’s return to the broadcast as an analyst. The details, in press release-form:

The themed day will be anchored by the “Hockey Day SoCal” set location at Anaheim ICE and a special hockey themed telecast launching the day at 12PM; the network will be back with “Hockey Day SoCal” updates at approximately 5:30PM. Mike Pomeranz will host the program alongside Guy Hebert, who will offer analysis as they check-in with the “LA Kings Live” crew at STAPLES Center and “Ducks Live” crew at Honda Center throughout the day.

Beginning at 12:30PM, “LA Kings Live” will preview the Golden Knights vs. LA Kings game from STAPLES Center. Hosted by Patrick O’Neal, Jarret Stoll and Derek Armstrong will deliver analysis before handing it over to; Jim Fox and Alex Faust who will then offer analysis and play-by-play, respectively. The Kings-Vegas broadcast on Saturday is also the next in the Hockey Night in LA series, a special matinee edition featuring Andy Lassner.

For the first time, FOX Sports West will feature the 16AAA Jr. Kings vs Jr. Ducks game. Originating from Anaheim ICE at 4:00PM (tape delay from 9AM), David Gascon will provide play-by-play, Hebert will offer analysis and Taylor Felix will supply reports and interviews.

To round out the day at 6:30PM, “Ducks Live” pre-game will set up the Coyotes vs. Ducks game from Honda Center with Host, Kent French, Analyst, Brian Hayward and Reporter Jill Painter-Lopez. Hayward will then join Play-by-Play Announcer, John Ahlers in the booth. Coverage will conclude with “Ducks Live” post-game, recapping the best of the day from each location.

The hockey community is encouraged to join the celebration by using #HDSoCal and visit foxsportswest.com/hockeyday for a compilation of all “Hockey Day SoCal” content. 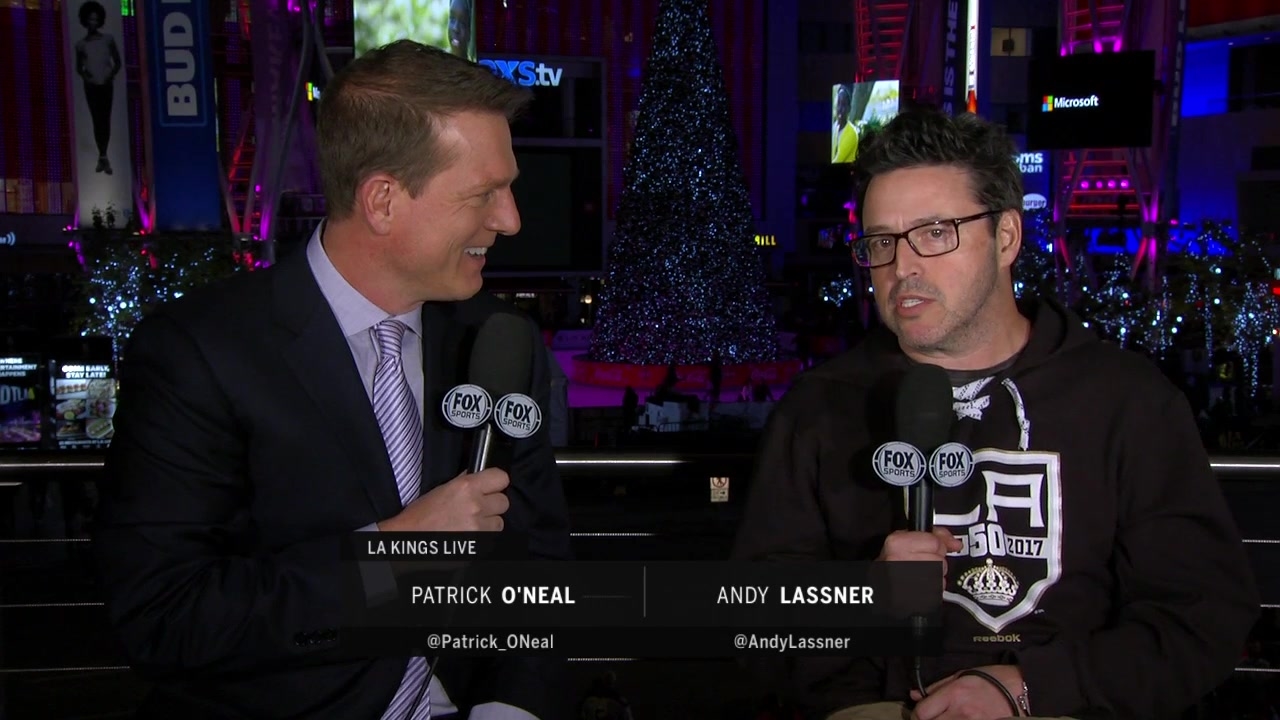 ANDY LASSNER, AWARD-WINNING AND LONG-TIME EXECUTIVE PRODUCER OF THE ELLEN SHOW, TO BE THE FEATURED CELEBRITY GUEST OF HONOR FOR ‘HOCKEY NIGHT IN LA’ ON DECEMBER 29 DURING SPECIAL MATINEE EDITION

LOS ANGELES – Andy Lassner, Executive Producer of “The Ellen DeGeneres Show,” will serve as the special Celebrity Guest of Honor for Hockey Night in LA on December 29 when the Los Angeles Kings host the Vegas Golden Knights at STAPLES Center. Game time is 1 p.m.

The special Matinee Edition on December 29 will be the fifth installment of Hockey Night in LA which the Kings, in conjunction with FOX Sports West, launched this past November. Hockey Night in LA is a series of special weekend games in which club broadcasts and activations in and around STAPLES Center have a different silver-themed feel, including celebrity guests, debate-themed programming and outdoor fan fests featuring live music acts. The Kings also wear their new Silver Jerseys for all Saturday home games.

Lassner joined the producing team of “The Ellen DeGeneres Show” at its inception in 2003 and was promoted to Executive Producer in July 2005. In addition to having a recurring segment on the talk show called “Average Andy,” Lassner and his fellow ELLEN executive producers host the behind-the-scenes podcast, “Ellen on the Go.” Lassner has earned 20 Daytime Emmy® Awards, three Genesis Awards, and one GLAAD Award for his work on “The Ellen DeGeneres Show.” In addition, Lassner has won two Johnny Carson Producer of the Year Awards in Variety Television from the Producers Guild of America. Lassner currently serves as Executive Producer for NBC’s fan-favorite game show “Ellen’s Game of Games,” NBC’s hit series “Little Big Shots,” as well as its spin-off series “Little Big Shots: Forever Young.” He previously executive produced the ABC reality show “Repeat After Me” and served as an Executive Consultant to Ellen DeGeneres at the 86th Academy Awards.

The Kings conclude their two-game road trip today, Sunday, in Las Vegas as the Kings face the Golden Knights at 5 p.m. That game will be broadcast on FOX Sports West, the FOX Sports App and the LA Kings Audio Network on iHeartRadio.