On a wild Friday night in San Diego, the Ontario Reign found themselves on the wrong side of a 5-3 final score to open a home-and-home set.

In a game that featured a scoring clock controversy, disallowed goals, three fights and a whole lot of penalties, the Reign were in it for most of the night, but wound up short when the final buzzer sounded. San Diego scored a goal that went in after the first-period buzzer had sounded, which is supported by the photo seen below. 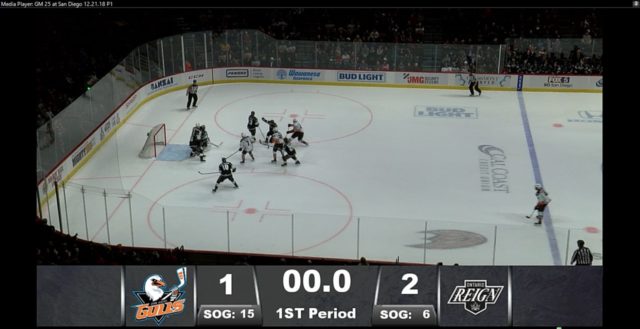 The picture says it all, it’s black and white….or in this case, black and green. The green light is on, signaling the end of the first period, and the puck didn’t cross the line. And, to make matters worse, it was judged that the goal went in with 2.9 seconds remaining in the period, due to inconsistencies between clocks. To my understanding, the officials only get access to the overhead net camera feed when reviewing a goal. Therefore, if that feed is incorrect, it’s the only evidence the officials have to go off of – That feed read that there were 2.9 seconds remaining on the clock, when in reality the clock actually read zero.

At the end of the day, it’s a play that changed the game, taking a 2-1 Ontario lead into a 2-2 tie through 20 minutes. Knowing exactly what might’ve transpired tonight is hard to tell, in an emotional game between two divisional rivals, that featured penalties on penalties and several more instances that could have led to more, and could possibly boil over into tomorrow.

The Reign did get off to an early lead 3:03 into the game as defenseman Austin Strand scored his first career AHL goal. With Ontario on the man advantage, the 6-3 blueliner sent his shot from the point through traffic and past San Diego netminder Kevin Boyle for the game-opening goal.

Less than three minutes later, San Diego tied the game at one as forward Sam Carrick made a power move down the left wing, skated in on Budaj and went to his forehand for the goal, his team-leading 13th tally of the season.

The Reign pulled back in front just shy of the halfway mark of the first period as forward Brett Sutter capitalized while a man down for the 2-1 lead. After Sutter fed defenseman Alex Lintuniemi, the Finnish blueliner put a perfectly timed, cross-ice return feed back to Sutter, where he buried on the empty net for the goal, his sixth of the season.

As detailed above, a San Diego goal was scored after time had expired, tying the game at two through 20 minutes. Defenseman Luke Schenn fired a shot past Budaj from the slot, which was judged by the officials to have gone in with 2.9 seconds remaining in the period, despite evidence, explained above, to the contrary.

San Diego jumped out to a fast start to the second period, scoring twice in less than a minute to open up a 4-2 lead.

First, while on the man advantage, defenseman Andy Welinski scored his third of the season from the left point, firing through traffic in front of Budaj. Forward Max Jones got on the end of a Carrick pass at the back post just 50 seconds later, putting the hosts ahead by a pair.

Ontario moved back to within a goal inside the final five minutes of the second period with its second shorthanded tally of the evening. After Sutter forced a turnover deep in the offensive end, Kyle Bauman swung in and deked out Boyle for his second goal of the season, both of which have come shorthanded.

The Gulls regained their two-goal advantage with 14:06 left in regulation with the game’s final goal as Carrick collected his second goal and third point of the evening, beating Budaj on a wraparound on the backhand.

The game as a whole was taken over by penalties, with the two sides combining for 82 PIM’s. Ontario finished the evening 10-of-11 on the penalty kill, in addition to the two shorthanded goals. The two teams won’t have much time to sleep off this one, with a 3 PM rematch tomorrow afternoon at Citizens Business Bank Arena.

Mike Stothers on trying to move past decisions that are out of his and the team’s control
Well as a coach you try to deflect that distraction off the players, and put it on yourself and your staff. It’s up to us to try and rectify. San Diego scored a goal after time had expired and the green light was on. Inexcusable incompetence but you have to press on. The guys played hard and battled through a lot of elements, as well as their opponent. I am sure the guys were frustrated but it is just another learning experience.

On taking tonight’s frustration and channeling it towards tomorrow’s game
Put frustration in the rear view mirror and focus on the road ahead. We get another crack at these guys in less than 24 hours. It was a playoff environment in San Diego and we will try create it again at home Saturday

Brett Sutter on moving past what happened at the end of the first period
You know what, I thought we had a pretty good first. We probably could have played a bit of a harder game than we did in the first, but all in all, when you come out even after a first period on the road, you give yourself a fighting chance. We thought we could build off of that, we thought we were getting some scoring chances, even when the shots didn’t really show it. I don’t know, I don’t have much to say really.

On helping keep the team on track as a leader during an emotional game
You know, we had a fighting chance all night. When you’re in a close game, you want to try to stay out of the box and give yourself a chance to win. Unfortunately, we didn’t quite get the job done tonight, but in less than 24 hours, we’re going to get another shot at them and emotions are going to be high again, as they always are in a divisional game, especially these guys.

On taking the frustrating feeling from tonight’s game and channeling it towards tomorrow’s game
I just think, if you look a the standings right now, we’re on the outside looking in but we’re right there. You string a few wins together and you’re right back in the playoff picture and right now, much the same as last year, every win means so much, especially, like I said, these division games. We’ve got to dig deep, it’s going to come from the guys in the room, we’re not getting any knight in shining armor coming to save the day right now, so it’s got to come from us and it starts tomorrow.

Austin Strand on keeping emotions in check when things outside of their control don’t go their way
It’s tough. Obviously you don’t want to think about the refs too much. We were on [the Gulls] pretty hard, so it’s something we’ve just got to leave that alone and stick to our game, because I think if we don’t worry about the refs and we stick to our game, we could’ve had that game.

On taking as many penalties as they did
It sucks, especially for a guy who doesn’t kill many penalties, it just sucks. Being on the bench, it’s hard to keep your legs into it but we killed [10-of-11], that’s pretty good, that’s really good. It’s good to know that our penalty kill has that kind of a stat, but we can’t be taking that many penalties, especially with a team that’s got a really good power play, it just kills momentum.

On getting his first AHL goal
Yeah, it was nice. It was really good, especially being the first goal of the game that’s nice, I was super fired up. I was happy to score, especially on the power play. We were watching power-play video and I think our power play hadn’t scored in a couple of weeks, so it’s nice to get out there. That was my bread and butter back in juniors, so it’s nice to translate that into this game and to pro. 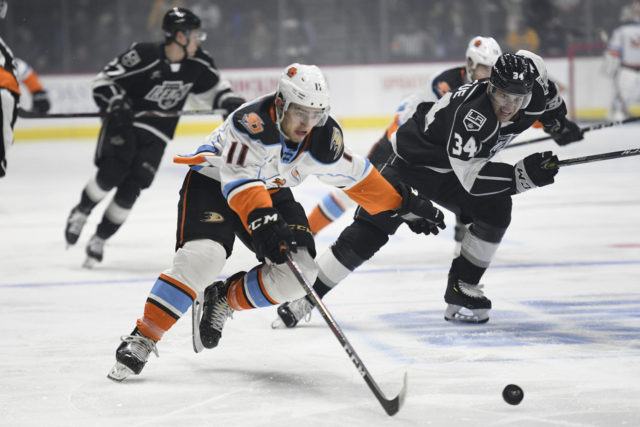 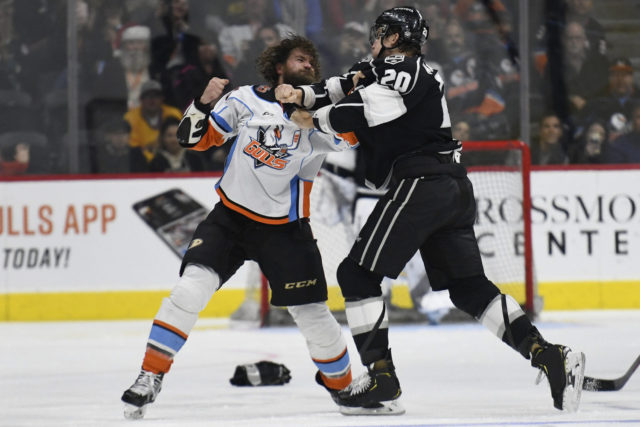 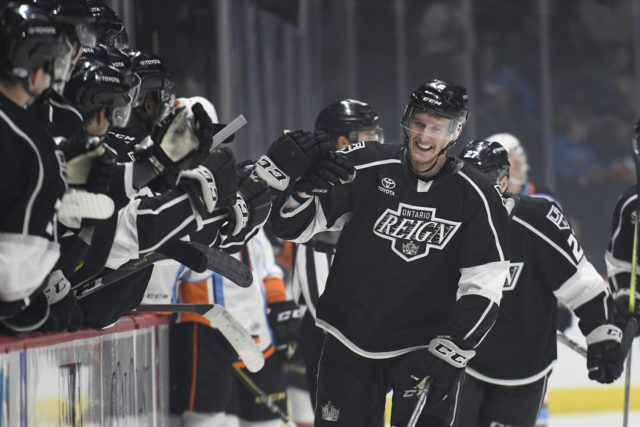