By Zach Dooley For LAKingsInsider.comDecember 19, 20180 CommentsProspects and Scouting
via Ontario Reign

With a lack of game action available in the AHL, with a collection of six defensemen playing most nights in the AHL, both blueliners saw time in the ECHL with Manchester. Strand collected a goal and two assists from nine games played, while Reddekopp collected four assists from ten games. Both defensemen spoke highly of their time in Manchester, noting the ability to play big minutes in all situations.

“Getting reps back into the game and getting ice time,” he said, when asked about his time in Manchester. “[Manchester Head Coach Doug Christiansen], he put a lot of trust in me with power-play minutes and penalty kill minutes down there. Just getting back into the lineup is a good feeling, it was nice to go down there, get some games and get that confidence back.”

Reddekopp echoed many of the same thoughts, taking the move positively and as an opportunity to play regularly.

“It’s nice just to go down there and get some playing opportunity, playing in all situations,” Reddekopp said. “I got to play on the power play and the penalty kill a lot more and obviously get more ice time than you would here, with how many good defensemen we have up here. Getting that extra ice time and your confidence up, it helps a lot.”

Let’s look at Reddekopp first. The 6-4 blueliner is a steady, reliable presence on the blueline, taking care of his own end, before focusing on the offensive side, to go along with a physical presence, something that he feels he can bring to the lineup at the AHL level as well.

“With my size, I’ve got to play bigger and use it to my advantage,” Reddekopp said. “Finish checks, take away time and space. If I’m doing that and I’m being hard to play against, I think that’s what my goal is. Like I said, I’m going to be physical out there and if you worry about your own end first, I think the offense will come later. Right now, I’m just trying to be hard to play against.

That confidence should serve him well back in the AHL. Partnering with defenseman Matt Roy, who has been a leader on the Reign blueline this season, Reddekopp collected an assist in his first game back and has posted two points (0-2-2) from five games played this season.

“I really liked Redd,” Ontario Head Coach Mike Stothers said following Saturday’s game. “I thought he was heavy, he was physical, he was hard to play against, he was determined in our end and he’s a guy that just has to keep his game simple and I thought he did a really good job of it tonight. He’s good for us and he’s a good penalty killer too. Another big body with some reach and understands the game, works hard, got an element of toughness to him. We haven’t seen that yet, but we’ll keep poking the bear, see if we can get him mad.”

With the recent set of roster moves, that sees two of the regular six defensemen up in the NHL with the Kings, Reddekopp sees his current situation as an opportunity to prove himself at the AHL level. How does he do that? It’s all about the little things. 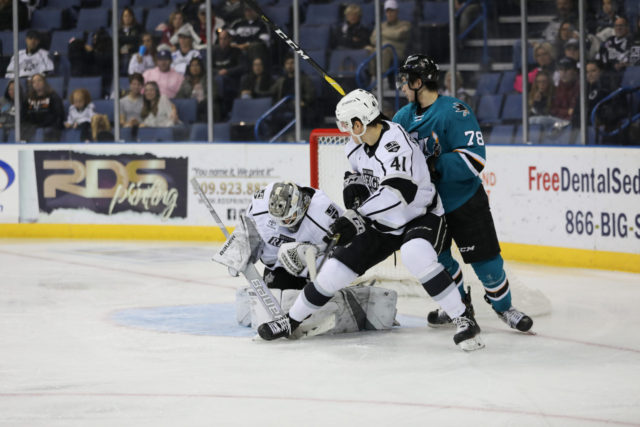 Taking a look at Strand, the right-handed shot blueliner provides a bit of a different look to the Reign. Strand is coming off of a season where he amassed 25 goals in the WHL with Seattle and has an offensive component to his skillset.

He admitted that there were some challenging moments with not getting into games regularly in Ontario.

Strand found himself inserted back into the Ontario lineup for both games this weekend. The 6-4 blueliner has collected an assist from three games played, overall, in the AHL and is still adjusting himself to the professional level. His Head Coach was happy with how he took advantage of his opportunity on Saturday. 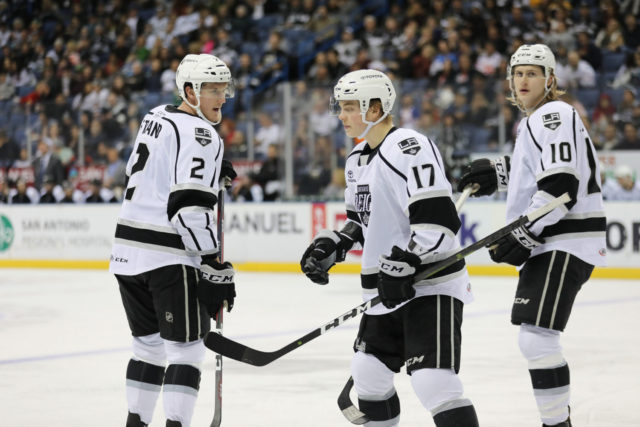 “He got in because of an opportunity presented and that’s a good thing,” Stothers said. “That’s what young players need to do and then you’ve got to take advantage of that opportunity and I thought he handled himself pretty well. I mean, obviously you can see he has some mobility and some puck skills. I guess the good thing was he wasn’t trying to over-do things. I think he played within himself and I thought it was a good second game.”

While both Strand and Reddekopp stand at six-foot-four, the two players provide a different skill set to the Reign. Strand, a right-handed shot blueliner, is coming off of a season where he amassed 25 goals in the WHL with Seattle and has an offensive component to his skillset. It’s the other end of the ice where Strand has worked the most, trying to move the puck quickly and effectively to keep his team out of its own end.

“My game is just being a solid two-way d-man,” Strand said. “I don’t like to spend a lot of time in the d-zone, I think I’m pretty good at making plays to get out of the d-zone, so we’re not spending a whole lot of time in the d-zone. In the o-zone, I’m just trying to help out offensively, whether it’s making a play on the blueline or using my speed in the o-zone to try and stir their team up and create havoc down low.”

The adjustment from the ECHL to the AHL did take the rookie a bit of time to figure out. “I just had to adjust to the speed and everything and get back into it,” Strand said about Saturday’s game against Colorado. He said that he felt more comfortable in the lineup on Sunday against San Jose.

“Sunday, I felt like I had my game back,” he added. “I had a good amount of ice time and I was just able to skate a lot, legs felt good, I felt good. I thought I was making some good plays and helped try to make a couple offensive plays too, I thought I had one or two nice plays in the o-zone. In the future, I’ve just got to help get the puck in the back of the net.”

For the forseeable future, both defensemen should get an opportunity to earn their roles with the Reign. With defensemen Alec Martinez and Dion Phaneuf both injured in Los Angeles, opportunity should continue to trickle down to the Reign, with both young players in a prime position to make an impact.