Waking Up With The Kings: December 12 - LA Kings Insider

Waking Up With The Kings: December 12

By Zach Dooley For LAKingsInsider.comDecember 12, 20180 CommentsUncategorized

It’s Wednesday afternoon at 1 PM local time in Ohio and Jake Muzzin is still on the ice for another shift in Buffalo. The 6-3 defenseman was the non-injury related story of last evening’s game for the Kings. Muzzin collected a goal and an assist in the 4-3 overtime defeat and logged a regular-season career high 30:35 on the blueline with Drew Doughty and Dion Phaneuf leaving the game with injuries. Muzzin logged difficult minutes all night, especially in the game’s final 42 minutes. “He’s a great player,” Kings Head Coach Willie Desjardins said. “Every time he goes out he plays hard and he gives us both offense and defense. A lot of times guys see him as an offensive defenseman, but he can do it all and he’s a big guy and he loves to play, and he’s got such a good attitude around the locker room as well, so a big effort by him tonight.” 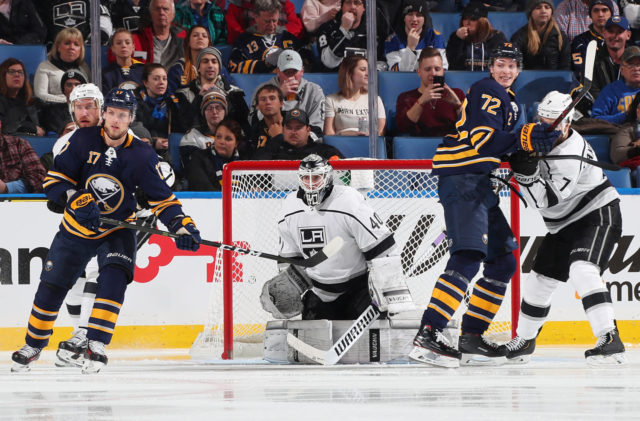 BUFFALO, NY – DECEMBER 11: Vladimir Sobotka #17 and Tage Thompson #72 of the Buffalo Sabres surround Cal Petersen #40 of the Los Angeles Kings looking for a tip attempt during an NHL game on December 11, 2018 at KeyBank Center in Buffalo, New York. (Photo by Bill Wippert/NHLI via Getty Images)

The Kings earned their first point of the four-game road trip by hanging on to force overtime in Western New York. Things seemed to be going positively for Los Angeles through 40 minutes – The team held a 3-1 lead, courtesy of goals from Adrian Kempe and Matt Luff in the second period but the third period began slow for the Kings and the momentum began to swing. First, Jack Eichel wired home a power-play goal 3:47 into the third period and less than four minutes later, Johan Larsson re-directed the game tied. All that good work, seemingly evaporated 1/3 of the way through the third period. From there, it felt like it was only a matter of time, as the four-man defensive unit continued to battle, but a gritty effort, combined with a standout, 43-save performance from Cal Petersen, pushed the game to the extra session, albeit with the Kings shorthanded. When the feeling throughout the building was waiting for if, not when, the Sabres would breakthrough, the Kings showed resolve in a gusty effort to force overtime. 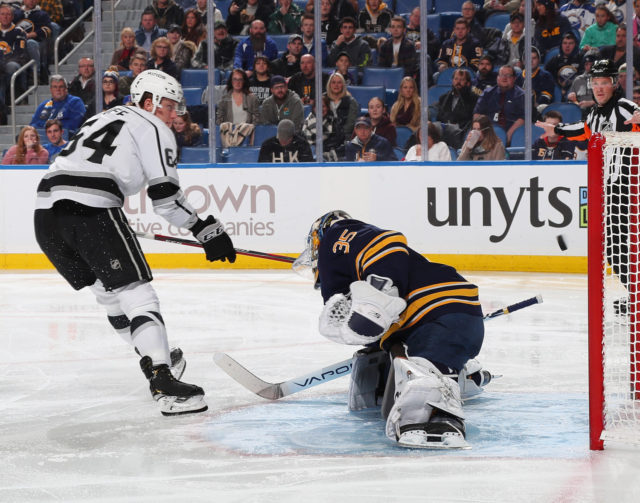 BUFFALO, NY – DECEMBER 11: Matt Luff #64 of the Los Angeles Kings scores a second period goal against Linus Ullmark #35 of the Buffalo Sabres during an NHL game on December 11, 2018 at KeyBank Center in Buffalo, New York. (Photo by Bill Wippert/NHLI via Getty Images)

The unit of Muzzin, Derek Forbort and Anze Kopitar nearly killed off the penalty, with Desjardins even taking his timeout midway through to rest his top killers. Jeff Skinner had different ideas, however, ending the game with just seven seconds remaining on the kill. While the Kings sit at just 0-1-1 on the current road trip, you can say that the effort and the compete has been there through two games, even though the team can rest on just the single point. After the game, Muzzin acknowledged the effort and battle put in by the defensive unit, but still ended by saying that the Kings have “got to start finding ways to win hockey games”, calling yesterday’s loss frustrating. In the NHL, there’s no such things as moral victories and seeing a 3-1, third-period lead fall through the cracks to earn just one point isn’t a game that will qualify as one with this group.

Next in line for the Kings is Columbus, which lost a pair of third-period leads last evening against Vancouver on home ice, falling 3-2 in regulation after a Jake Virtanen goal inside the game’s final minutes. The Blue Jackets sit in second place in the Metropolitan Division, but have lost four of their last five entering tomorrow’s game with the Kings 1-3-1 in their last five.

As of this morning, have not received any updates regarding Doughty or Phaneuf. Kings are on the ice today at 2 PM for an optional skate – Will have reports from the team later today following practice. 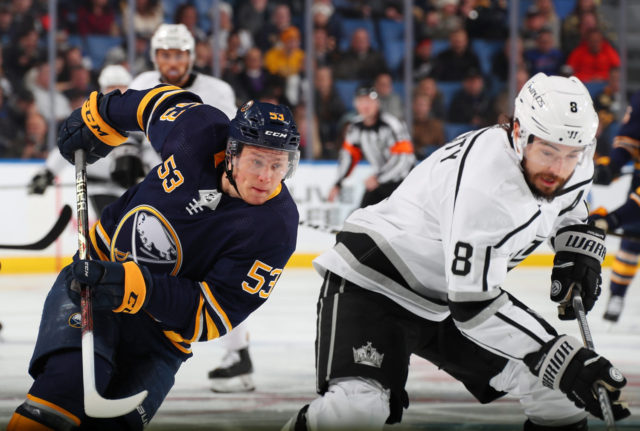 BUFFALO, NY – DECEMBER 11: Jeff Skinner #53 of the Buffalo Sabres and Drew Doughty #8 of the Los Angeles Kings follow the play during an NHL game on December 11, 2018 at KeyBank Center in Buffalo, New York. (Photo by Bill Wippert/NHLI via Getty Images)