The Kings announced today that defenseman Sean Walker has been recalled from the AHL’s Ontario Reign, while forward Gabe Vilardi, off of his conditioning stint with the Reign, has been loaned to Team Canada for training camp for the upcoming 2019 IIHF World Juniors Championship tournament.

As reported this morning, defenseman Alec Martinez is day-to-day with an upper-body injury, leaving Los Angeles with exactly 18 skaters as of today’s game. Walker joins the Kings with one assist from four NHL games played with the Kings, in addition to 17 points (6-11-17) from 20 games played in the AHL with Ontario. Walker ranks tied for seventh in the AHL in goals by a defenseman and tied for ninth in points, as well as fourth amongst defensemen with at least 20 games played with 0.85 points-per-game.

Prior to the start of the season, Ontario Head Coach Mike Stothers had the following to say on Walker’s playing style –

“I think he’s been most impressive in the fact that his skating ability, it’s unreal how he can make things happen out there. He can skate himself out of trouble, he can get up in the rush, he can get back and cover up if there’s something wrong or something’s gone haywire, and you know what, he’s a good hockey guy, he has a good hockey IQ.”

Vilardi is coming off of a four-game conditioning stint with Ontario, where he totaled one assist. Vilardi made his professional debut last week on November 29 in Bakersfield, before he collected his first career professional point on December 2 in a 5-4 overtime win over Tucson. Vilardi was a late scratch on Saturday in Tucson in what would have been his fifth and final game on his conditioning stint.

Following Vilardi’s professional debut against Bakersfield, Stothers had the following to say about the young forward.

“I thought, for his first game, with as long as he’s been off, he certainly shows a real hockey sense,” Stothers assessed of Vilardi’s debut. “He’s got an awareness of where he should be, what he should be doing, sorting things out, whether it’s a neutral zone forecheck or defensive zone coverage. I think that’s really encouraging, that there’s a good hockey mind there to go along with the talent that he has.”

Vilardi’s injury, which caused him to miss Saturday’s Reign game, was undisclosed and today’s update of being loaned to Team Canada, does not provide any further insight into that. Vilardi joins fellow Los Angeles prospects Markus Phillips, Matt Villalta and Jaret Anderson-Dolan on Canada’s WJC training-camp roster – Anderson-Dolan is doubtful for the tournament due to injury.

At the Reign level, goaltender Cole Kehler was reassigned to Ontario from the ECHL’s Manchester Monarchs. Additionally, goaltender Charles Williams has been released from his PTO. 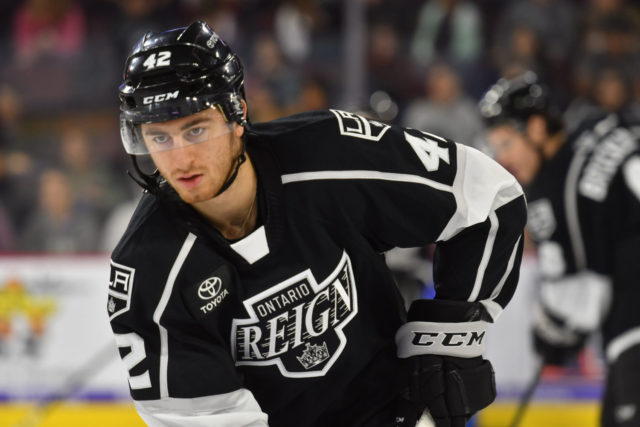