–The vitals: Jonathan Quick was the first goalie to leave the ice, so he’s projected to make his first start since his outing at Dallas on October 23. Looking for his first win on the season in his fifth start, he’ll face an Edmonton team against whom he’s found a great deal of success, going 21-5-5 in 31 career games with a 1.85 goals-against average, a .931 save percentage and two shutouts. “He’s a big part of our team,” Dustin Brown said. “He has been for the last decade, so when you get a player like that back, it just gives you a boost. Cal’s played great on the ice. Getting Quickie back, just having the voice in the room for us, he’s been one of the pillars of our team, so when you get a guy like that back it should give you a boost of energy.”

Oscar Fantenberg and Michael Amadio remained on the ice for extra work and are not expected to play tonight. There are several milestones approaching. First, Tyler Toffoli will play in his 400th career regular season game. “Obviously the most memorable moments are the ones in the playoffs,” he said when asked about his favorite regular season memories. “Your first one – scoring your first NHL goal. Your NHL first a lot of those things where you finally make it to the NHL, so you’ve got to look back at those moments.” 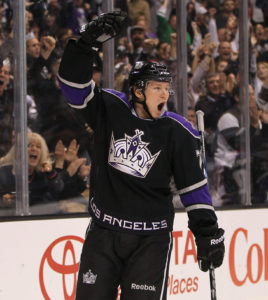 Naturally, Darryl Sutter wasn’t about to wax poetic about a rookie after that game, saying, “I put him on the ice on the power play. He should come and thank me.” There are good Darryl quotes from that night, a 4-0 win over the Phoenix Coyotes in which Los Angeles wore purple and black jerseys for the second-to-last time ever. After the game, Toffoli said the puck from his first career goal would “probably” go to his parents after he had given them the pucks from his first career OHL and AHL goals.

“Any kid dreams to play in the NHL and to score, and to be playing with the linemates I’m playing with now, it’s an honor, and I just want to keep playing my game,” he said after finishing with a goal, an assist and a plus-one rating in 12:18 of action while playing at five-on-five alongside Mike Richards and Jeff Carter.

In addition to Toffoli’s 400th game – and Edmonton forward Alex Chiasson’s 400th game – it’s Alex Iafallo’s 100th career game tonight. “I’m for sure still a young guy and learning every day from all these guys. It’s been fun so far,” he said. “It’s pretty cool, and to share that with Toff at 400, coming up here is pretty cool.”

Iafallo, who has 14 goals and 35 points through his first 99 games, said that he got past the wide-eyed realization that he was an NHL player and settled into some additional layers of confidence “probably a little past halfway” of his rookie season. “Just trying to take everything in and the teams you’re playing against and the type of play you have to have every night. Just having that mentality every game, I feel like [I became more comfortable] halfway through last year, a little past that,” he said.

Another milestone within reach: Drew Doughty’s next assist will tie him with Rob Blake (333 assists) for the most all-time among Los Angeles defenseman and eighth place on the club’s overall list.

–Their vitals: Six-foot-seven goaltender Mikko Koskinen – a.k.a “Three Meters Koskinen” – has been excellent in net and will draw the start against the team that took a pretty strong look at him three off-seasons ago. At home, Ilya Kovalchuk’s former SKA teammate is 3-0-0 with a 0.83 goals-against average, a .973 save percentage and two shutouts. Kevin Gravel will replace Jason Garrison and return to the lineup after sitting out Edmonton’s 1-0 overtime win over Dallas two nights ago. “It was different,” he said of facing his former teammates on Sunday at Staples Center. “It was kind of fun to be back and see all the guys. They’re guys you spent the last three or four years with, and then all of a sudden you don’t see them at all anymore. So, it was good to see them and catch up after the game. It’s cliché, but once you get to the rink all that stuff, it’s still a hockey game. You have a job to do and you turn a blind eye to all those friendships and then catch up after the game or whatnot. It was good. It was weird to be on the other side.”

Per NHL.com correspondent Derek Van Diest, expect the Oilers to line up with forward groups of Draisaitl-McDavid-Chiasson, Caggiula-Nugent-Hopkins-Puljujarvi, Lucic-Brodziak-Kassian and Khaira-Spooner-Russell and defensive pairings of Klefbom-Larsson, Nurse-Russell and Gravel-Benning. Edmonton is without Los Angeles alums Andrej Sekera (Achilles) and Tobias Rieder (upper-body), both of whom are on injured reserve.

–More on Toffoli. He’s been stuck on five goals and 12 points for three straight games and hasn’t scored in six. But he was robbed twice on Tuesday – once early, and once late on a timely kick save by Jacob Markstrom on a two-on-once rush – and has been generating chances that just haven’t hit pay dirt. “Obviously, the points and production aren’t there, but I think for the most part we’re creating a lot of opportunity,” he said. “I think we’re playing really well. If we can keep playing the way we have the last few games, the goals and everything are going to start coming. I don’t think we’re really too worried about that.”

His grouping opposite Kyle Clifford on Jeff Carter’s line began on Sunday at home against Edmonton and continued its encouraging play Tuesday night.

“I was happy with that Carter line,” Willie Desjardins said. “I thought that line produced a lot of chances. I had them as the top producing line, so I think things are going to come for that line. They just have to keep playing the way they are. I think Carter’s playing well, as well. He’s a little bit snake bit right now, but he looked good in practice today.”

–The Kings did a pretty good job containing the lethal combination of Connor McDavid and Leon Draisaitl in the team’s recent meeting, limiting the all-world duo to just one point in a 5-2 win. “Yeah, I thought we did a good job against [Connor McDavid],” Drew Doughty said. “He obviously got the one assist on the power play. I thought we did a good job with him. He got some chances, but … if you’re going to let him get all that speed through the zone, he is going to go around everyone. That’s just the bottom line. Obviously, he’s going to want to do more out there tonight, so it’s going to be a lot harder for us.”

When facing the Kings since the start of the 2016-17 season, McDavid has played the plurality of his minutes against Doughty, followed in order by Derek Forbort, Anze Kopitar, Jake Muzzin, Brown, Tanner Pearson, Toffoli and Alec Martinez. He actually owns worse possession numbers against Muzzin and Martinez than he does Doughty, so the stats don’t necessarily depict anything too concerning when McDavid faces the preferable match-ups at home.

“We played a pretty good game. We got off to a really good start,” Dustin Brown said of the teams’ meeting Sunday. “I think that’s important, especially against this team. Scoring the first goal is huge for us. It’s been a problem of ours as a group all year. Obviously you’ve got to pay special attention to McDavid. He’s a special player, so we’ve got to make it hard on him, and that’s going to take five, six guys on the ice to do it.”

Edmonton’s production obviously isn’t just contained to McDavid and Draisaitl. 2018 Stanley Cup champion Alex Chiasson, who inked a one-year contract with the Oilers after attending training camp on a PTO, had Edmonton’s two goals Sunday and ranks third on the team with 10.

–I’ll be joined by Marco Sturm outside the dressing room and Iafallo from the bench during the LA Kings Live pre-game show. There’s more to come from Reign Insider Zach Dooley on Gabe Vilardi (UPDATE: here), who made his pro debut today, taking two shots and finishing with an even rating in Ontario’s 3-2 win at Bakersfield in the AHL version of tonight’s match-up. It’s a game day, Insiders. Let’s talk soon.

Gabe Vilardi’s conditioning assignment with AHL-Ontario began this morning. Coverage to come on both @lakinsider and @reigninsider. Photo courtesy @condors.