–The vitals: Cal Petersen left the ice first and is projected to make his seventh consecutive start in goal. But wait, there’s more! Jonathan Quick was the only other goaltender on the ice this morning and has been activated from injured reserve. Peter Budaj, no longer with the team, has been assigned to AHL-Ontario. Trevor Lewis has been placed on injured reserve. There are 22 players on the active roster, with Oscar Fantenberg and Michael Amadio the two extra skaters who remained on for extra work with Quick. And thus ends the lineup and roster portion of our broadcast.

“I feel healthy, I feel good,” Quick said. “I feel healthy out there. It’s just like I said, I’m happy to be practicing with these guys full time and getting the opportunity to come on the road with them. It’s been a while since I was able to do that with these guys, so it’s fun.”

–Their vitals: Brock Boeser will be activated from IR and return after missing 11 games with a groin injury. Jacob Markstrom is expected to start. There are interesting Jake Virtanen and Dion Phaneuf notes in Ben Kuzma’s game-day notebook, which also projects an alignment of Roussel-Horvat-Gagner, Goldobin-Pettersson-Boeser, Virtanen-Granlund-Eriksson and Leipsic-Gaudette-Motte up front and defensive pairings of Edler-Biega, Hutton-Gudbranson and Del Zotto-Tanev. Brandon Sutter (shoulder), Sven Baertschi (concussion) and Jay Beagle (broken arm) remain on injured reserve.

Last Sat neither @Canucks or @LAKings scored in 1st period. #Canucks have scored 14 1st period goals (29th in @NHL) while LAK have a league-low 12 goals in the opening 20 mins…

–Gabe Vilardi has officially been sent to Ontario on a conditioning assignment. As shared earlier this month, my understanding is that Vilardi is eligible to play in three games with Ontario on the assignment, though Los Angeles could petition to extend it for an additional two or three games. He’s ready. The sense as of the past week is that he’s done all he can do in practices, and now it’s time to continue the checklist with actual professional games. Vilardi (back) transferred his rehabilitation to the ice when he skated in a track suit during the third week of September and graduated to full gear near the start of the season. He has recently skated regularly with the Kings and on Tuesday morning practiced with the Reign, who play at Bakersfield at 10:30 a.m. Thursday, at Stockton on Friday and host Tucson on Sunday. I’m not expecting this rehabilitation to continue past a hypothetical December 7-8 series at Tucson, but let’s not look that far ahead yet.

–Kovalchuk skating on the fourth line was a topic of conversation for the second consecutive day, with Willie Desjardins asked how he plans to “get through to him” the need to be responsible and productive.

“I don’t think it’s a matter of ‘getting through to him,’” Desjardins responded. “Like, he has a great attitude. He wants to go every shift, he’s excited about it, he was the first guy in when he didn’t get ice time to go out in the game day skate. He’s not hanging his head, it’s nothing like that. But it is hard to find it. When you’ve always been a top-two line guy for sure, all of a sudden somebody puts you on the fourth line, it’s going to be hard for him to find his game, so it’s not fair to him in some ways, either. I’m making him play to his weaknesses. At the same time, I’ve got to look after a team and I’ve got to find where he fits on those lines. So, that’s still a little bit of a work in progress, so his attitude’s been great.”

Desjardins is very much aware of the ramifications across the room and the effect this episode could have on a star player’s morale. “He wants to play. Any player in that spot would react the same. So you think about that and you also think about the team, the message you’re trying to send to the team, and how that applies. You take all those things into consideration before you make a decision.”

He also noted during a follow-up that there wasn’t a specific message he was trying to send to the team in reducing Kovalchuk’s minutes. “I just made that decision because it gave us the best chance that game, and I think it gives us the best chance down the road, too. Today’s a new day, and we’ll evaluate it as we go.”

–This represented Willie Desjardins’ first media availability at Rogers Arena since leaving the Canucks in 2017, and much of the discussion after the morning skate was about his Canucks tenure and other opportunities that have come along, such as his position as the head coach of Canada’s men’s national team, which he guided to bronze at the PyeongChang Games. He had spoken to teams about potential opportunities, but said, “I don’t think my heart is really into being an assistant coach. I wanted to be a head coach, it’s what I wanted to do.”

He had the opportunity to reflect on his Vancouver tenure in which he guided the Canucks to 101 points and a playoff berth in his first season in 2014-15 before a pair of playoff-misses during a span in which his personnel did not necessarily match-up favorably against the California-based balance of power at the time.

“I think Vancouver had its challenges,” he said. “I never left here thinking I was the reason the team didn’t do well. I never felt that. They had to make a move, and I was the one they decided to make, and that’s the way it goes in our business. It was never I felt that I didn’t do a good job. I think that’s something that when I looked, I thought I’d get a chance – but with the Olympics and that, it was good. That was an amazing opportunity, something that I’ll always cherish.”

–More to come this afternoon from Jeff Carter and Kyle Clifford. Tonight’s officials are referees Francis Charron and Eric Furlatt and linesmen Bevan Mills and Travis Gawryletz. Patrick O’Neal will have a one-on-one with Jonathan Quick, and I’ll be joined by Derek Forbort from the bench. A second intermission Rosen Report will cover some of the prospect topics shared yesterday evening. Let’s talk soon, Insiders. 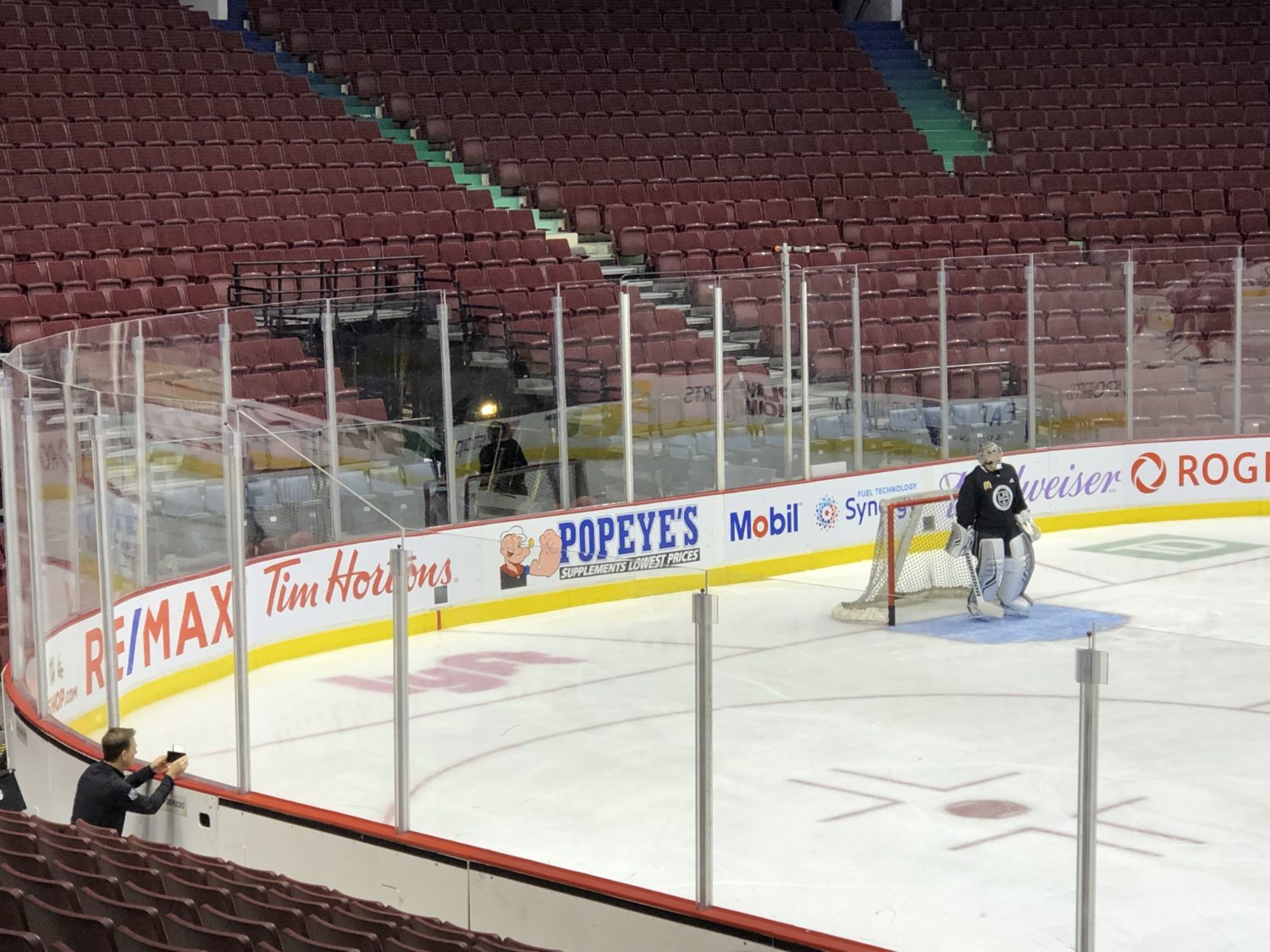