LA Kings Assistant General Manager Michael Futa recently returned from an overseas trip to Helsinki, St. Petersburg and beyond, having observed prospective free agents as well as Los Angeles draft picks in his evolved role in which he has added player recruitment to his traditional scouting duties. He returned with fresh reports on 2018 first round draft pick Rasmus Kupari, as well as a direct and honest appraisal of where things stand with Nikolai Prokhorkin and Dominik Kubalik, whose recruitment he compared to the movie Groundhog Day. It’s an interesting look at how the team structures its overseas scouting network that has grown and evolved significantly in recent years.

LA Kings Insider: We’ve seen the production that Kupari has had this year. He’s scoring, he’s making plays. In person, how did he look?

Michael Futa: It was fun to watch first of all. His pace was excellent. I had a chance to watch him the night before on video. I was traveling with Christian Ruuttu and he had one in particular, but two assists that were world-class, I mean, just basically speed, poise, making plays. The one he circled the entire zone, made a high-level play to [Aleksi] Heponiemi, just the kind of assist that’s special. And then the next night I saw him live and he was a little tired, a little bit more fatigued. He had just come back, I think he played in the Under-20s and he played four or five games in five days, and plus it was back to back nights, so one thing you could see, he’s playing a ton, his skating again was excellent, it was a real physical game, which was good to see him compete in a game like that, and that’s when you can see sometimes when you talk about guys, it doesn’t hurt to leave them over there for an extra year when they’re playing in a league like that. He was going head to head against that [Kaapo] Kakko kid who’s rated second overall and it was just an excellent hockey game and again, a sold out building so it was good to watch him play. He’s making huge strides and he looks like a different kid on the ice as far from a physical standpoint, too. He looks like he’s growing up.

LAKI: Did you get the chance on this trip as well to spend some time with him away from the rink or was he with his team and playing games?

MF: No, I think Nelson was there a couple weeks earlier and spent some time with him. I know Christian’s been down to speak to him. I know they talked to him at the tournament. In most cases, like when I have my trip to Russia, I always spend time with the players, but in this case it was more of a travel need. I was flying out the next morning and had to get back.

LAKI: When you were in Russia to see SKA, were you there to see Nikolai Prokhorkin, or was it primarily more scouting?

MF: Well, it’s the same. Blakey, we talked about this new group, I’m combining it. I’m looking for free agents and just looking for skill, and it happens that I always try and see our own guys when I’m over there as well. So, the Kupari thing worked out well. I met with [Jacob] Moverare. He didn’t play the night that I was in to see him. And then Prokhorkin’s game, the first night he was coming back from the Deutschland Cup I believe, and they sat him out, which was frustrating. And sat [Alexander] Dergachyov out, which was frustrating. It’s not like you’re going down to the South Bay to watch an exhibition game when I get to Russia, but I think the thing with Prokhorkin is he’s really produced this year, and the next game he dressed and he had three goals and two assists. Pavel Datsyuk sat out that game and he played in the top line and he was excellent.

LAKI: Is there a good bond between you two?

LAKI: Is this the final year of his contract there?

MF: Yeah, and again, he gave me his word that he wasn’t signing a new deal.

LAKI: Was this a trip in which you worked a lot with Matjaz Kopitar, or were you primarily working with Christian Ruuttu?

MF: Ruutts is our Director of European Scouting. So, Ruutts does the amateur stuff and he’s tireless as far as this stuff is. He does a lot of the pro stuff and what I’ve tried to tell those guys like Ruutts and Nick Andersson and Jussi [Kari-Koskinen], that if they can kind of give me a heads up – if there’s a college free agent, everybody knows that next year he’s ‘coming out,’ so to speak. But with the NHL European free agents, you’ve got to be prepared to jump right on ‘em, and some of these guys, you’ve got to know their contract situations, and those guys do a superb job of giving us a heads up now. In the case of Yuri Khmylev and Matty [Kopitar], this is the first time, well Yuri’s been scouting for a long time, but Matty, this is his first time doing it. We really enjoyed our time, this is the first time I’ve been with him at a tournament at the Karjala Cup and it’s just a process going over with him what our expectations are from reports. And obviously, he’s seen a ton of NHL games and he’s coached at a high level, so it’s something that’s new for him. He seems to really be enjoying it. Again, we went over the type of reports and what we’re looking for and I think part of the biggest thing is getting used to your travel. That whole schedule, you know you’re not traveling with the team, is booking your own flights and getting your own cars and getting to the rinks, finding your way around. But he’s very fortunate. I know Christian Ruuttu spent some good time with Matty. I know I spent some good time with Matty, made sure he was well-fed, took him out to dinner. Stefan Ustorf was there from Berlin as well. It’s our first time together really as that group, so I’ll go back and meet with Matty at the Channel One Cup. We’re going to meet in Moscow again and that’ll be the next time. I’ve kind of given him some players and names to look at between now and then and then he’ll go back, I think he’s going to Spengler Cup in Switzerland in January. So, when you look at it, with his hockey background, it should be a really good fit. It should really be helpful to us. 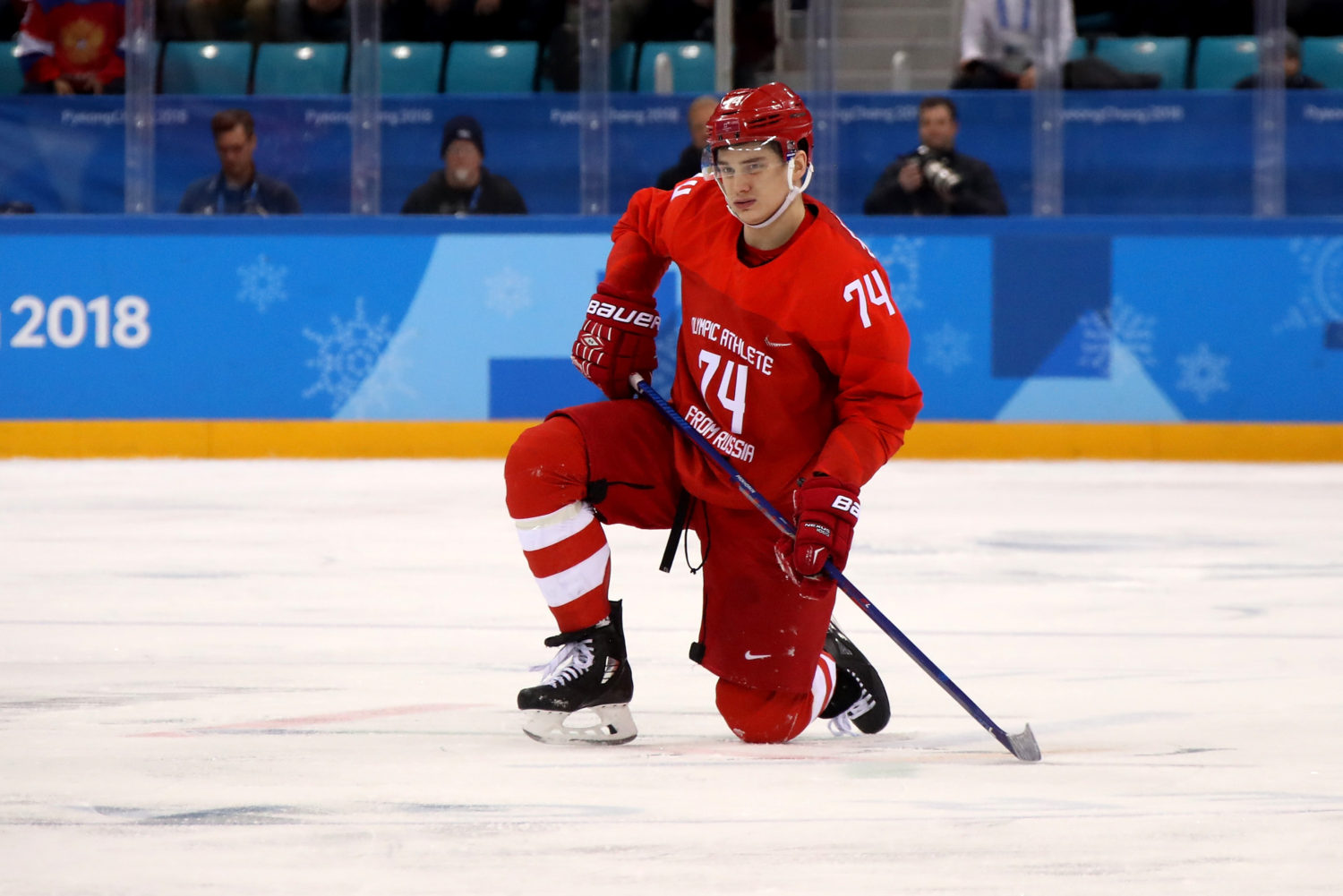