Ontario Reign forward Philippe Maillet led the team with two assists in yesterday’s win over San Diego. The 5-9 center has now collected a point in four straight games, with six assists combined over that stretch.

While he hasn’t attributed his recent success to anything in particular that he’s been doing differently, Maillet credited the guys around him and hard work for the points coming together.

“I think I’ve just been trying to play hard on every shift,” Maillet said. “I’ve been getting some bounces and guys have been making some good plays. We’ve got a good thing going now with a lot of wins and it’s fun to contribute.”

Expectations were high for the second-year player after he ended the 2017-18 season on an absolute tear. Maillet totaled 31 points (15-16-31) and a +10 rating from 33 games played in the second half of last season. He led the Reign in goals during that stretch, was second in points and his 15 goals were tied for tenth in the AHL throughout that 33 game-span. Maillet collected a point in 21 of the 33 games and never went back-to-back games without picking up a point.

Fast forward to this season and the Quebec native started a bit slowly with a goal and two assists from his first nine games played. While you could see his high skill level, Maillet admitted that, at times, frustration did set in a bit as he felt he was overthinking things on the ice.

“I think I was just trying to think too much and maybe force some plays,” he said. “If you play the right way, good things are going to happen so I kind of brought my game back to that and so far it’s going well right now.”

Ontario Head Coach Mike Stothers cautioned to not get too high in any small sample size, as is the norm, but did note that things seem to be trending the right way for one of his higher-end offensive talents.

“I hope so,” Stothers said when asked if it seemed that Maillet’s game is falling into place. “Frenchie’s a little bit streaky and you keep your emotions in check and you don’t want to get too worked up that things are falling into place for him and that’s good, they should be. Much the same as when they’re not, you try not to let his momentum or body posture exude anything other than confidence and that’s a tough thing. Sometimes the points are there and sometimes they’re not. It’s real good that he’s contributing right now and let’s hope that he continues to do so.”

A big part of Maillet’s game has been performance on the power play, with one of his two helpers last evening coming via the man advantage. Maillet has tallied three power-play assists so far this season, tied for the fourth most on the Reign. Getting contributions from special teams has proven to loom large with winning hockey games and Maillet noted that after yesterday’s win.

“Especially in this league, special teams are huge,” Maillet said. “[Last night], I feel like our special teams gave us a lot of momentum. We had a lot of big kills in the second and a big goal too from our PK so obviously it gives you wings.”

Maillet’s game has, in a way, been similar to the Reign as a whole this season – Slow to start but never down and out. In last night’s game against San Diego, the Reign conceded three goals in the first period and fought back to earn the victory. While last night’s start, at least on the scoreboard, wasn’t as desired, the Reign’s resilliancy has never wavered.

“We’re starting to get a taste of victory and the boys have started to realize it feels pretty good to win,” It was a tough 0-3 start [tonight] and the boys stuck with a couple good power plays and PK and the guys are showing a lot of character right now.” 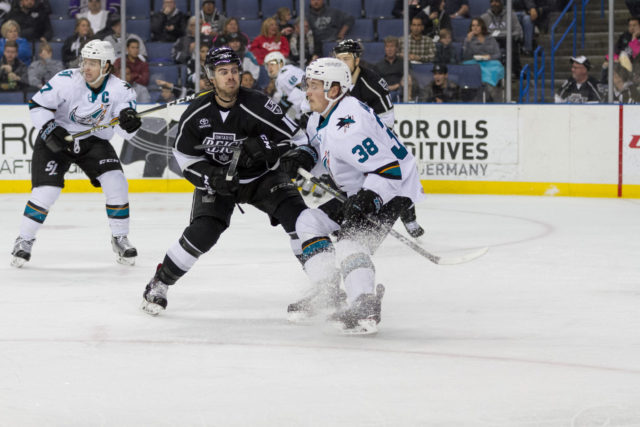