Waking up with the Kings: November 17 - LA Kings Insider

Waking up with the Kings: November 17

Several abbreviated thoughts about the LA Kings’ 2-1 shootout win over the Chicago Blackhawks:

–The Kings weren’t graceful out of the starting gate, but between the halfway mark of the first period and until the midway point of the second, they played some of their best attacking hockey of the season. That’s not saying a whole lot, and woe are the Blackhawks, and L.A. really got pushed back over the first half of the third period, but there were indications that they were trending towards the type of hockey they want to play at five-on-five. Of course, there were penalties that complicated things, but interestingly, Los Angeles scored their goal shortly after a Chicago power play ended, and Chicago scored their goal shortly after a Los Angeles power play ended. Aside from the Toronto game, the penalty kill has shown real signs of growth this month – as should be expected from the team that finished first in that category last season – and was a significant influence in the victory. 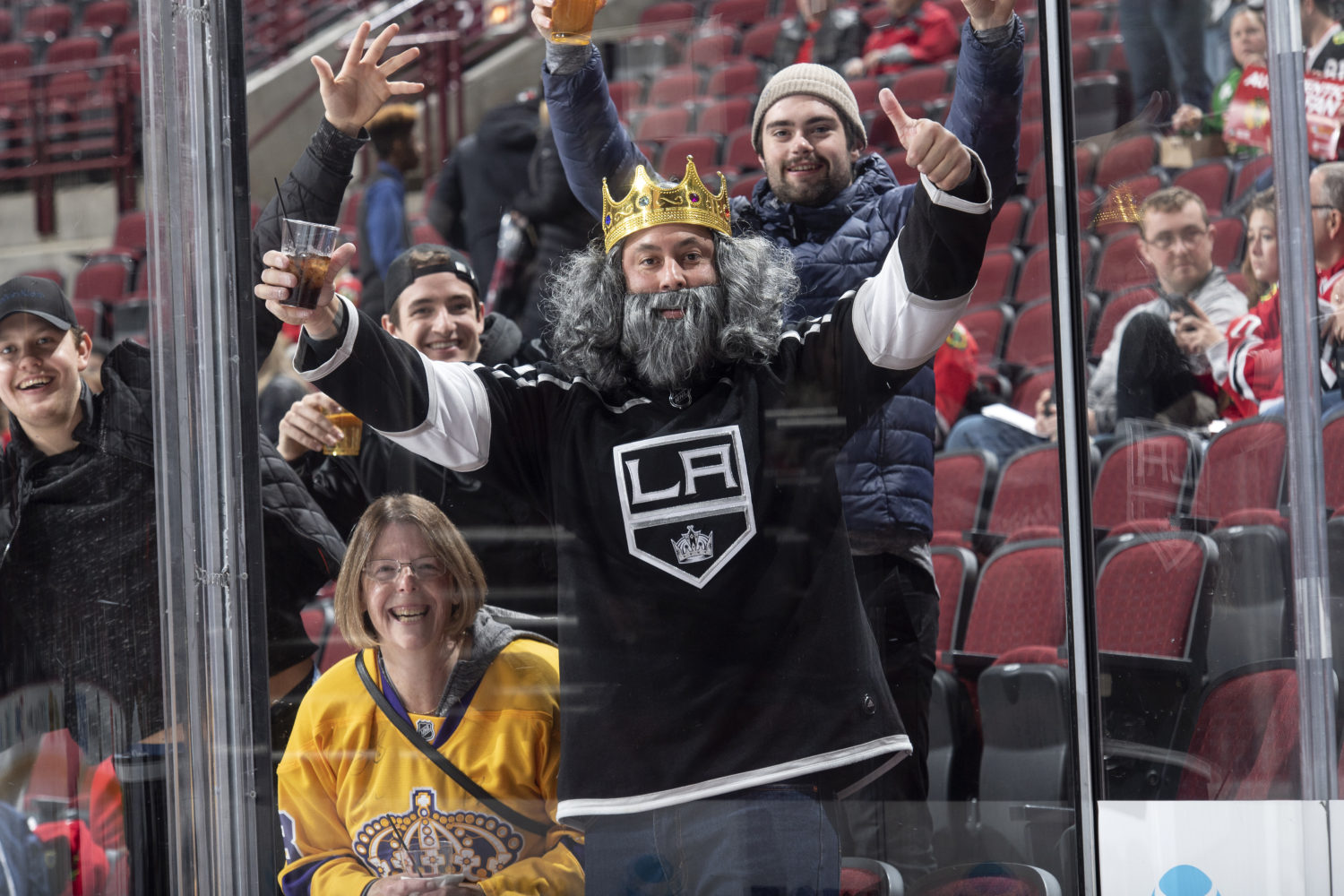 –Cal Petersen was also very, very good. Everything was smooth, square and controlled. I’m not remembering any real moments when he was caught out of position or failed to square up to a shooter. The Kings worked hard to channel a lot of the tough stuff away from him, but Petersen still made excellent saves on Nick Schmaltz (twice), Brent Seabrook and Alex DeBrincat over the second half of the game and was only beaten by a bang-bang play from Jonathan Toews to Brandon Saad. Good players make those plays happen; no real harm there. Everything we’ve seen and heard from Petersen from his first days in the organization was that he’s very poised, intelligent and smooth in the fog of battle. It also didn’t hurt that his first career start came in his adopted hometown of Chicago and in a building he’d played in with Notre Dame. 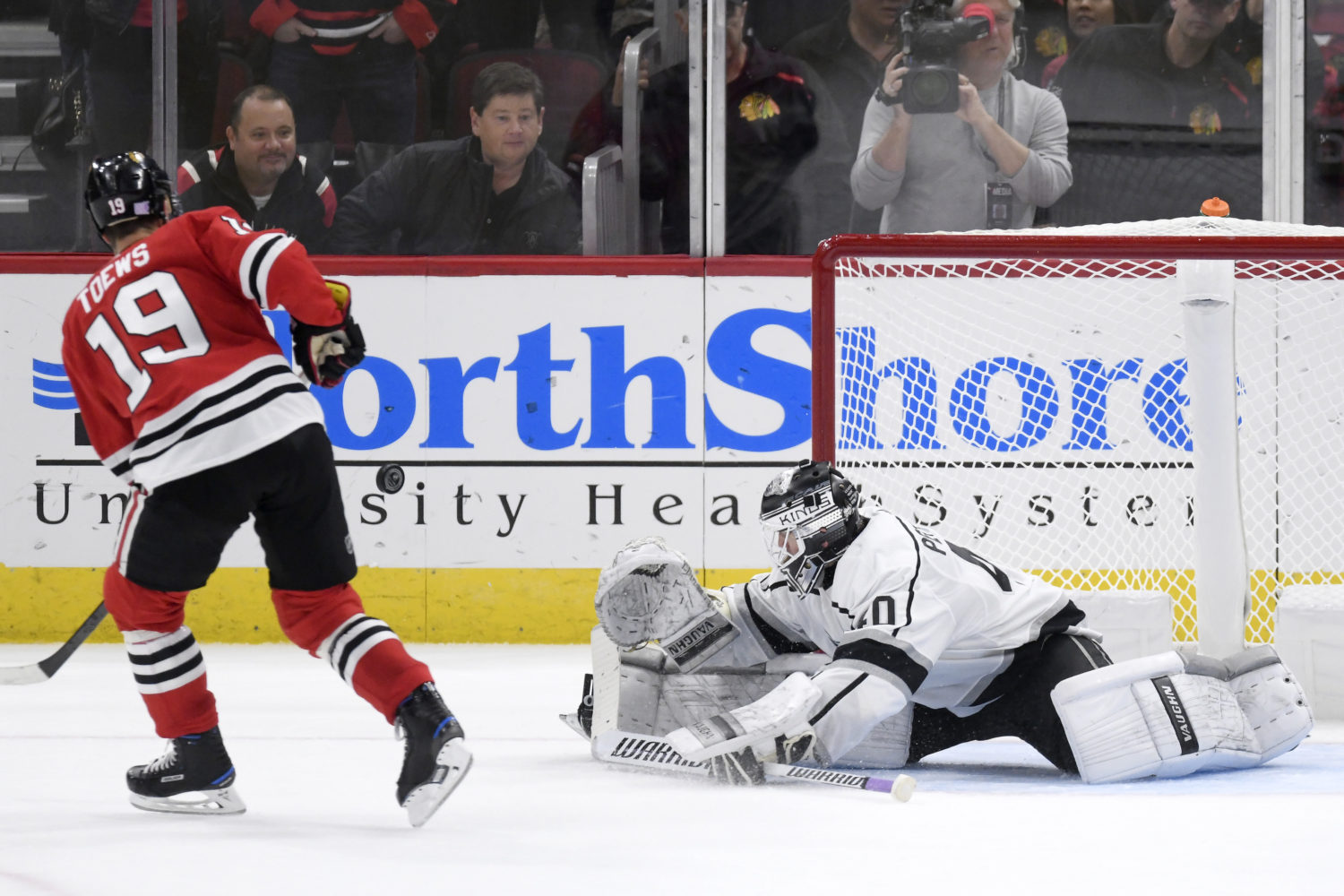 –The Hagelin-Kempe-Luff combination was dy-no-mite, and the Blackhawks are fortunate they didn’t allow a goal to a group that was consistently working deep in the attacking end. Under both John Stevens and Willie Desjardins, the Kings have been looking for one of their young players to really command a spot in the lineup, and while we saw some flashes of that very early from Austin Wagner, neither he, nor Sheldon Rempal, nor Luff have really claimed that spot yet. Luff made the strongest case out of any of the three since opening night. It was interesting to hear Desjardins mention that his temporary reassignment to Ontario was work-related. “Luff, we sent him down because I said ‘you’re not probably working as hard as I want,’ and I said, ‘when you come back, be our hardest working guy and you’ll stay,’” he said after the game. “He worked hard tonight.” He also showed some good speed to keep up with the other two blazers on what was a consistently effective line. 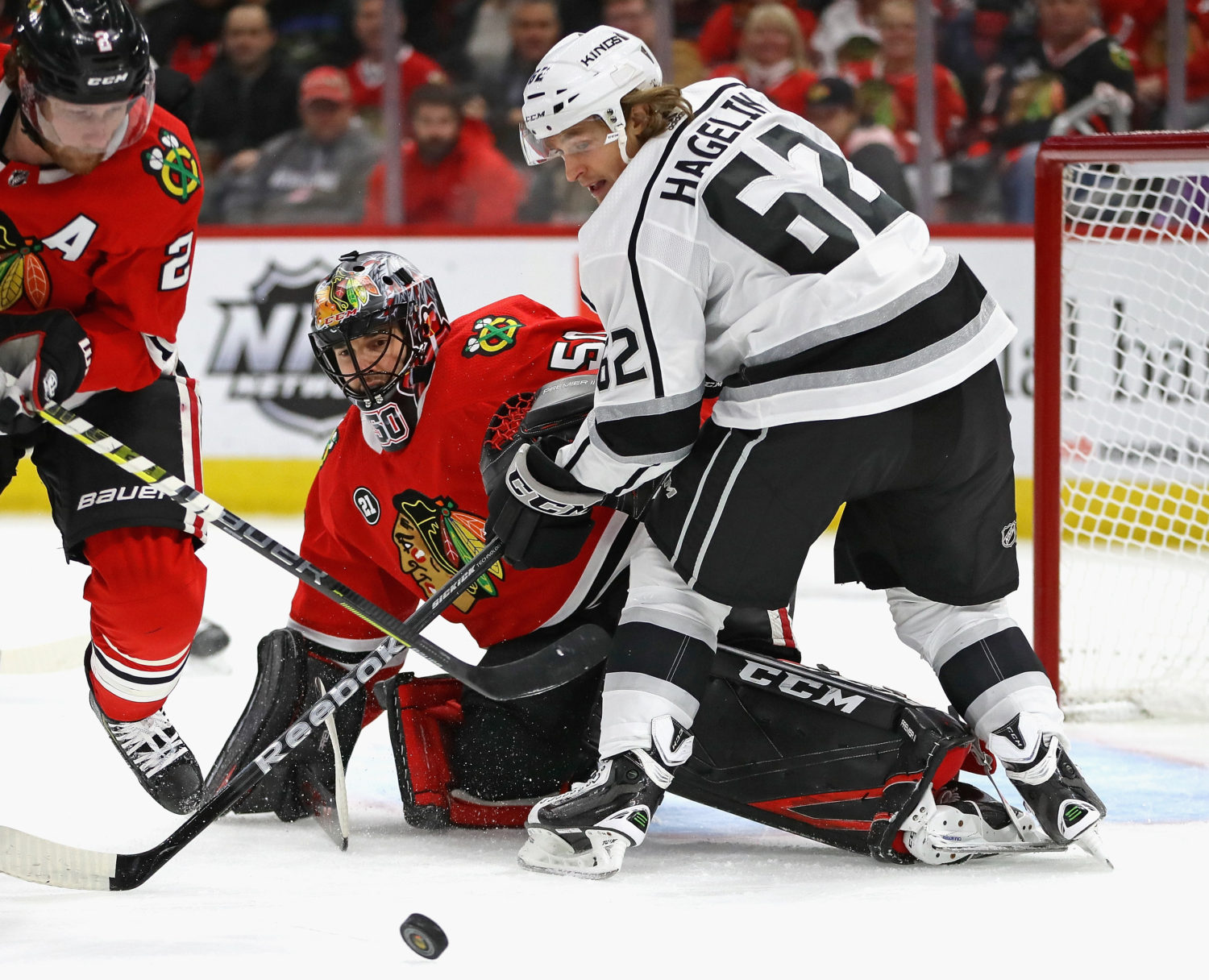 –So, Ilya Kovalchuk started a shootout attempt too early and had to return to center ice. Has anyone ever seen that before? I hadn’t, nor had several others on the media bus after the game. What happens when a player starts too early in a shootout? Is the attempt negated? Does he get arrested? Fortunately for the Kings, Kovalchuk simply had to start over again, and picked up right where he left off in 2013. Kovalchuk’s combined 13 shootout goals from the 2011-12 and 2012-13 seasons led the NHL, and his 65.0% shootout percentage over that time ranked second behind Evgeni Malkin’s 69.2% among players with a minimum 10 attempts. This is a real specialty of his, and one of the first things that came to mind when the Kings were courting him. He made it look pretty easy, too, slinging the puck far post past Corey Crawford. 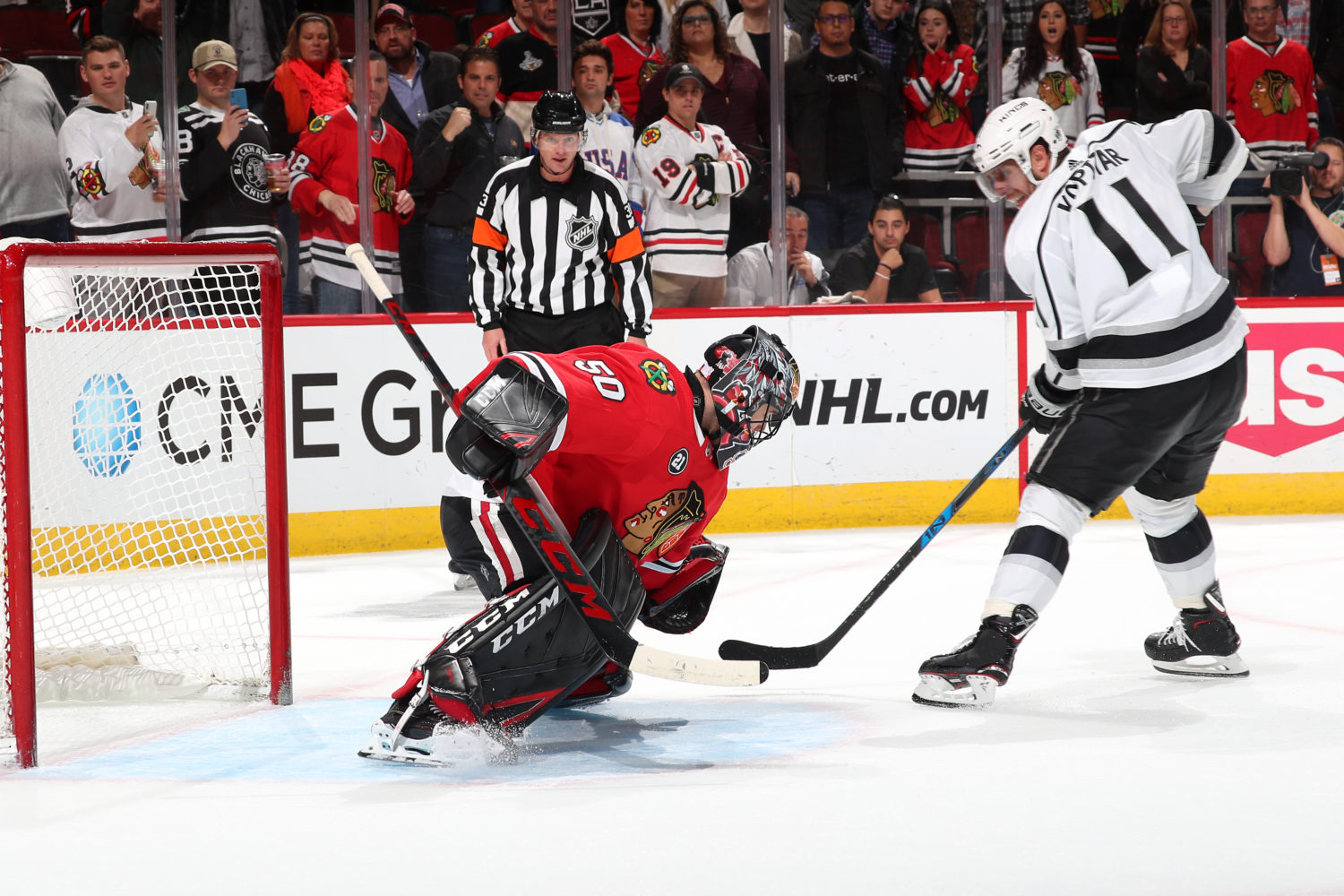 –Goals are goals are goals, and the 31st ranked offensive team can’t be picky about ‘em. But they haven’t beaten a goalie clean over the last 240:18, dating back to Jake Muzzin’s goal against Minnesota. That’s not quite fair, because so many goals right now come from tips, deflections (see: last night), redirections, screens, second opportunities and grease. But it’s also representative of a larger skill issue. Los Angels’ 5×5 shooting percentage ranks 30th at 5.56%, which is considerably lower than their league-low 6.26% rate from the 2016-17 season. It’s still in the wonky sample size part of the year, but their 5.56% and Arizona’s 5.49% are the two lowest five-on-five shooting percentages by any team in any season since 2011-12. 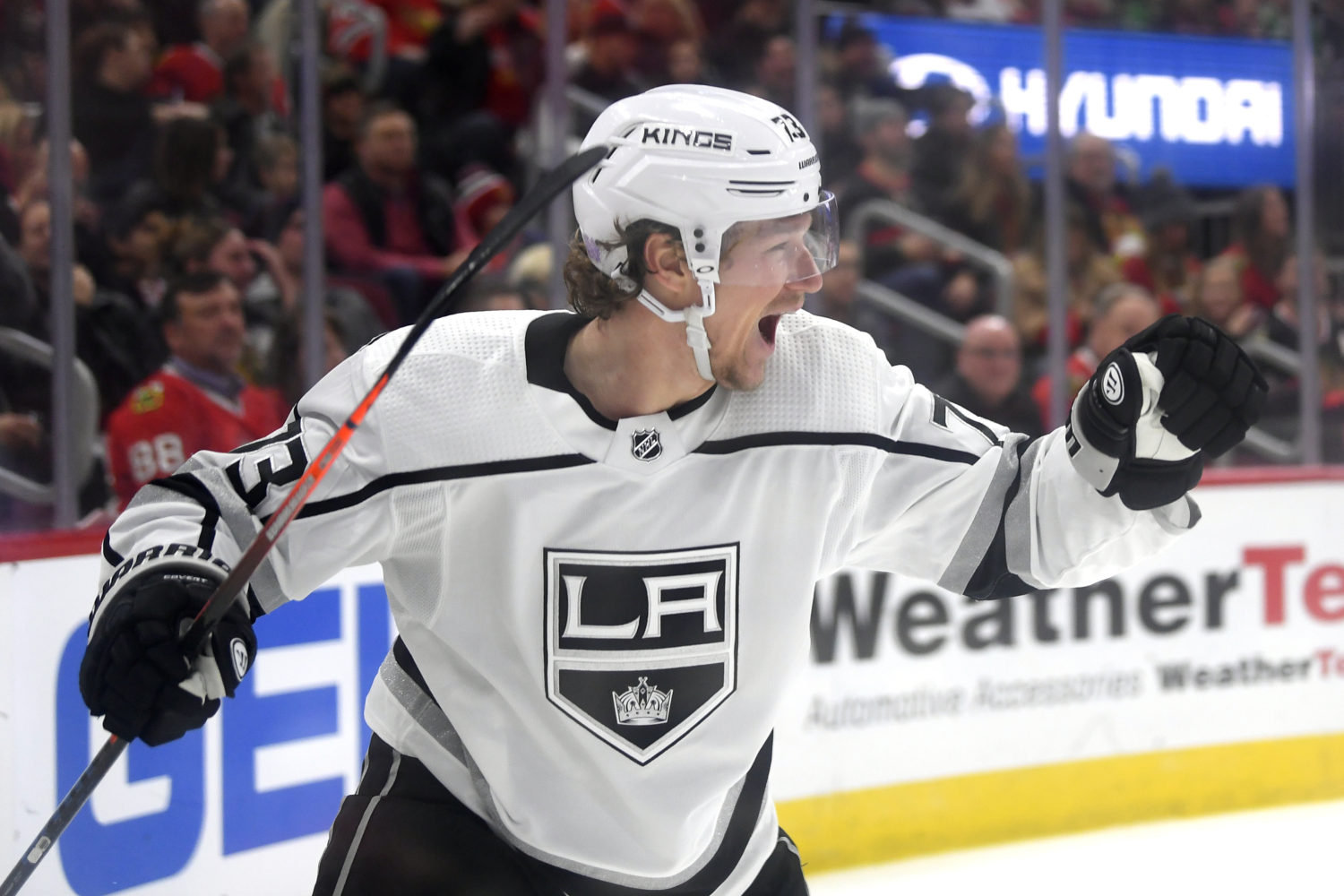