By Zach Dooley For LAKingsInsider.comNovember 8, 20180 CommentsCommunityOntario Reign
via Colorado Eagles

A couple of items from this week in Reign land. The team left today for Stockton, where they begin a home-and-home set this weekend against the Heat tomorrow evening at 7 PM. The two teams will also meet again on Sunday at 3 PM for Ontario in the Reign’s first matinee game of the season.

Roster Moves
The Reign made one roster move this week as defenseman Chaz Reddekopp was reassigned from Ontario to the Manchester Monarchs. Reddekopp was productive when in the lineup, described as “solid” and collected one assist from three games played. Getting into the lineup proved to be difficult at times, however, with Ontario’s glut of blueliners – Reddekopp has skated in just 3 of 10 games with the Reign thus far. A move to the ECHL will allow Reddekopp to log top pairing minutes on a nightly basis and continue to develop his game.

Reign Head Coach Mike Stothers was quick to note that the assignment to the Monarchs is not a knock on Reddekopp’s performance, rather simply a way to get more playing time.

“It’s much the same as when Strand went down. We have 8 D here and our schedule’s not too taxing right now, it’s not overly heavy with games. It’s hard to get a guarantee he’s going to play and then, the next thing you know, it’s gone a week or two and he hasn’t had any game action. He’ll be able to go down, play, get in all situations and then when he returns to us, he’ll be game ready, much the same as what Strander did. It’s a good luxury to have, to be able to do that with our guys. We talked to Chaz – by no means is it a demotion or a punishment because we were unhappy with his play. Far from it, he’s been terrific. He’s been very coachable, he’s been hard-working. You know, he sat out for a while then he got into the lineup and he was real solid for us. We’d be crazy not to take advantage of this situation where he can play and good for him – He’s going down with the right attitude and we don’t for sure know how long it is but he’ll be back.”

Additionally, Stothers deemed Emerson Etem being released from his PTO as a “mutual” decision between the player and team. 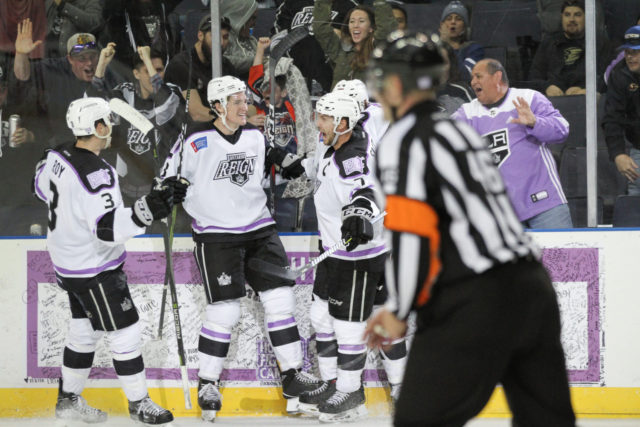 Defenseman Kurtis MacDermid was the highest selling jersey of the evening at $1,300, while forward Brett Sutter and defenseman Sean Walker also reached the $1,000 mark or higher.

“We are proud to have partnered with the AHL on our first ever Hockey Fights Cancer Night in Ontario,” Ontario Reign President Darren Abbott said. “So many people in our organization and throughout our fan base have had family members, friends or loved ones affected by cancer and their generosity during Saturday’s jersey auction enabled us to make a sizable donation to a worthy organization.”

The Reign also sold special warmup-used pucks from the game, donating all proceeds, in addition to money raised from a special ticket offer. American Cancer Society also sold rally towels at the game, with that total added to the overall efforts.

The Reign will next wear specialty sweaters on December 15, an ugly sweater theme, on Teddy Bear Toss Night in Ontario.

Sutter Mic’d Up
A cool piece of content shared by the Reign – the team mic’d up captain Brett Sutter during their preseason game against San Diego. There’s about 3-minutes available here of the best (and perhaps most appropriate) stuff, but a really cool video that fans don’t often see access to at this level.

Some key moments from the video –
– Preseason leads to some heavy breathing
– Brett Sutter is a father of two, and therefore knows the Frozen theme song inside and out
– Philippe Maillet doesn’t like to score with his linemates……..
– Hockey players do swear occasionally, from time to time, ever so often

Look for more videos from the team in this nature throughout the season between players, officials and some other creative concepts to truly appreciate what’s being said at ice level. Just another way to get closer connected to the players with new types of content. 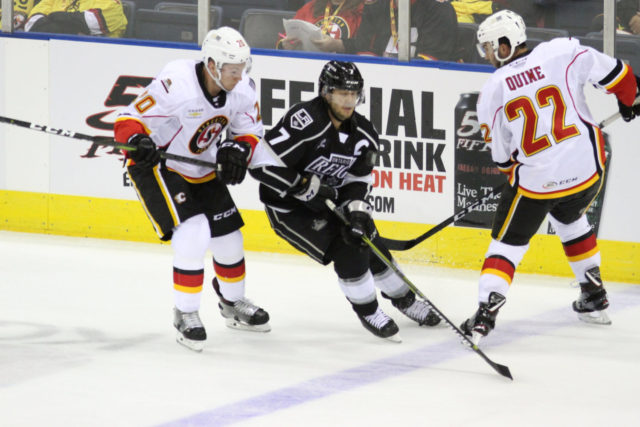