Per the LA Kings official press release earlier today, Head Coach John Stevens and Assistant Coach Don Nachbaur have been relieved of their duties. Willie Desjardins has been named the new Kings interim head coach, while Marco Sturm has been named as an assistant coach.

In his remarks, Blake said that Stevens was notified around 10 AM this morning of the decision and clarified that Desjardins’ interim tag means for the remainder of the season.

“This is a critical time in our season and our results to date have fallen well below our expectations. With that in mind, this was a difficult decision but one we feel was necessary,” said Blake. “We have a great deal of respect and appreciation for John’s time with our organization. He was a key part of our past success, and we have tremendous gratitude for his many contributions.”

Desjardins and Kings players will be available to the media informally tomorrow following the club’s practice at the Toyota Sports Center in El Segundo. The skate is expected to begin at 10 a.m.

Blake will be available today at noon to members of the media via conference call. For the call-in information, please reach out to Mike Kalinowski (mkalinowski@lakings.com) and he will reply with the numbers.

In addition, Don Nachbaur, who joined the Kings as an assistant coach prior to last season, has been relieved of his duties. His replacement behind the Kings bench will be former LA King Marco Sturm, who is currently the Head Coach and General Manager of the German National Team.

“We appreciate everything Don has done as a member of the Kings coaching staff, and wish him the best moving forward,” said Blake.

Desjardins has 20-plus years of coaching experience. In the NHL he served as head coach of the Vancouver Canucks for three seasons (from 2014-17). He also served as associate head coach with the Dallas Stars for two seasons (2010-12).

A native of Climax, Saskatoon, Desjardins is 61 years old. He is officially the 25th different coach in Kings history.

Sturm is a native of Germany who appeared in 938 NHL games during his playing career that spanned over 14 seasons. He registered 487 total points during his career (242-245=487), a career plus-59 rating and 446 penalty minutes.

Rob Blake took questions from the media earlier this afternoon. Below are his quotes from the conference call.

On the process over the last 24 to 48 hours and how he settled on that Willie was the man for the job right now
I think this process isn’t just 24 hours. You know, right from the start of camp, we’ve been keeping an eye on the team and it hasn’t gone the way expected it to and we haven’t played the way we expected to. Fast forward here today, I think what Willie will bring, what we want to bring back is we’ve got to get the compete level up on our players and we’ve got to get the passion back in our game and we expect fully that he can right that and take us in that direction.

On why John Stevens wasn’t able to this season what he was able to do last season with this group
Well, I think that’s probably the question as to why we’re at this situation. We had some of that compete, that life last year. I don’t think we saw it at a consistent level this year going forward. We have some real good players, we need them playing at a higher level. I think you saw a little bit of that last night, when your best players are your best players you will have success. It’s been an issue this season that we haven’t had everyone going in the right direction, on the right page along, so partly the reason for this change.

On why Willie Desjardins is the right guy for this team right now
I was looking to get the compete and the passion back, we need our players emotionally involved. It’s difficult to win when you’re not. We expect Willie to bring that passion and that excitement to this team and that’s why we went in this direction.

On whether there’s any worry that players may not respond to Desjardins, based on how they’ve played this year in general
We’re evaluating these players just as much as we were the staff, you’re correct in that. That evaluation continues from this point on for sure.

On what it was that took place after the Flyers game, if anything, that brought him to this decision
I’m not sure it was just the Flyers game and on. Like I said, I think you look at training camp, you look at the regular season to where we are now, those expectations have not been met. Like I said, we have really good players, we have players that can make plays, we expect them to make plays and we expect them to play with that level of compete. I wouldn’t say it was just from Philly on, there’s an accumulation of a lot of it through the season. We need to get that straightened around immediately.

On the connection between the organization and Willie Desjardins and how he wound up on the radar
I’m not sure there was a single connection. You cross paths with a lot of people in this game, whether it be players and coaches and that. I’ll keep pinning back, we need to be way more emotionally involved and part of that was a change here today and the evaluation going forward continues. We’re going to create a desire for these players to play well here.

On whether Willie Desjardins is a coach with a firmer coach than John Stevens, more of a disciplinarian
I’m not sure I would agree with that.

On the rest of the staff remaining in tact
Marco Sturm will be added as an assistant coach. Marco’s currently with the German national team, he has a commitment for the rest of this week – the Deutschland Cup is going on – and he’s committed to running that until November 11. Dave Lowry and Bill Ranford will be retained.

On Marco Sturm’s hiring and whether that came from the internal group or at Willie Desjardins’ recommendation
That was internal. Part of the reason, you know, new generational coaching style, success at the international stage, success as a player, player relations, tremendous person. A lot of that goes into play, but I’d say that was an internal decision that was made there. 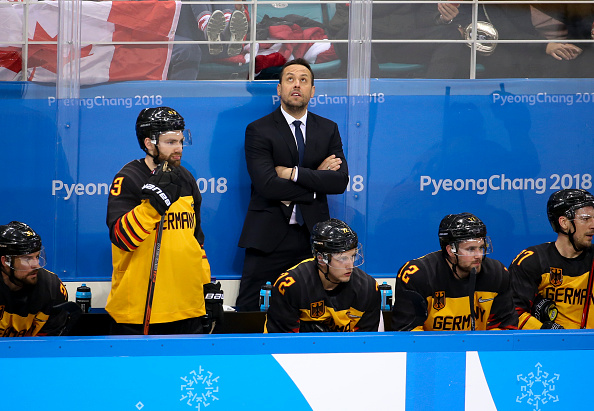