A lighter day as we begin the week but some odds & ends from the Reign world from today.

– The addition of Mike Amadio has shaken up the Ontario lineup a bit, at least on Day 1 at this morning’s practice. Here’s how the Reign lined up –

*At first glance, that’s some serious forward depth. Not that the Reign have had issues scoring goals……but this is the deepest they’ve been all season, especially spread across four lines*

The Reign have signed goaltender Evan Buitenhuis to a PTO to tandem with Cal Petersen. A goalie transaction was inevitable, with Peter Budaj recalled to the Kings over the weekend to replace the injured Jonathan Quick. Buitenhuis comes to Ontario from the ECHL’s Worcester Railers, where he posted a 1-0-0 record, a 2.13 goals against average and a .933 save percentage from two games played. Buitenhuis made his professional debut on October 14 as he played 25 minutes in relief, stopping all nine shots he faced. The Burlington, ONT native made his first pro start three days ago, as he stopped 33 of the 36 shots he faced in a 4-3 Worcester win over the Reign’s ECHL affiliate, the Manchester Monarchs.

Prior to joining the Railers for the 2018-19 season, Buitenhuis attended NHL training camp with the NY Islanders and AHL training camp with Bridgeport, before settling in with Worcester. Buitenhuis played three seasons of collegiate hockey with Hamilton College (Division 3), where he ranks second all-time in games played by a goaltender to none other than former Mighty Duck Guy Hebert (who, like my family, is from Troy, NY!).

With Hamilton, Buitenhuis won the 2017 Sid Watson Award as the NCAA Division 3 Player of the Year, as voted on by the American Hockey Coaches Association. Buitenhuis left Hamilton as the program’s all-time leader in both goals against average (1.67) and save percentage (.944) and led NCAA Division 3 in both categories during the 2017-18 season.

– The Amadio move has also shaken up the Reign’s roster logistically. Amadio will wear #19 with Ontario, the number he’s worn with the Reign over the past 3 seasons and forward Emerson Etem, who previously wore 19, will switch to 15.
– Buitenhuis will wear number 35. 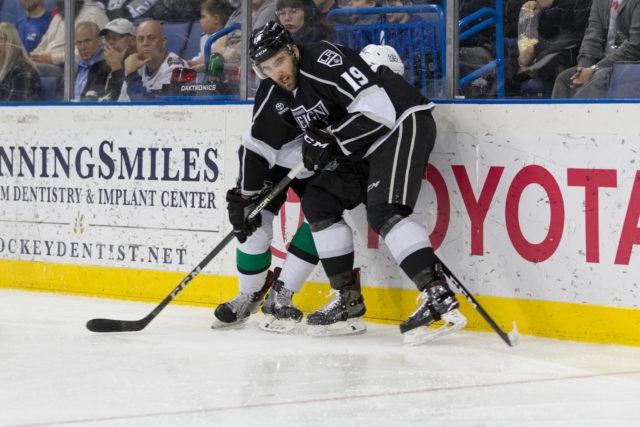 A look at the Los Angeles and Ontario players currently playing in the ECHL with the Manchester Monarchs. Manchester went 1-2-0 last week and, as noted HERE, has a heavy stretch of games in a period when the Reign are light (1 game in an 11 day stretch)

– Spencer Watson – Watson tallied a pair of goals over the three games last week, in addition to a +1 rating. Watson now has 3 goals and 4 points from 5 games played with Manchester.
– Austin Strand – In the week after he tallied his first professional goal, Strand picked up an assist from the three games, which came in Saturday’s win over Maine. Strand now has two points (1-1-2) from five ECHL games this season.
– Stepan Falkovsky – Falkovsky scored on Wednesday for Manchester and now has three points (2-1-3) from seven games played. The hulking defenseman is +4 on the season, the top rating on the Monarchs.
– Cole Kehler – Kehler made his professional debut on Wednesday and made 28 saves on 31 shots in a losing effort.

The Monarchs are back in action on Wednesday, Friday and Saturday this week, all at home.

The Reign released their 2018 Holiday Plan earlier this afternoon, featuring tickets to five selected games. Any Holiday Plans purchased by November 22 will also include a sixth game, complimentary, a Reign supporters scarf and free parking at all six games.

Ontario is back on the ice this tomorrow and Wednesday for practice, before they take on Texas in a rematch of last season’s Calder Cup Playoffs in Ontario on Thursday, the game that was re-scheduled from it’s original date on Friday. After another practice date on Friday, the Reign are home again on Saturday to take on the San Diego Gulls on Hockey Fights Cancer Night. More coming on the team’s HFC initiatives later this week.