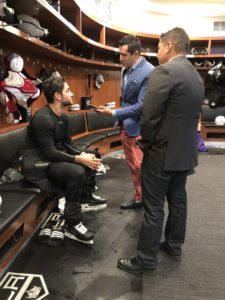 As announced in September, the games will mark the club’s first Spanish radio broadcasts since the 1997-98 campaign. The first broadcast will take place on Thursday, November 1, when the Kings host the Philadelphia Flyers at STAPLES Center during the Kings’ Dia De Los Muertos Night presented by Delta Air Lines.

Rivera has an extensive broadcast resume. For 12 seasons, Rivera has worked with Fox Deportes, serving as a play-by-play announcer and reporters for Major League Baseball games across the United States. In 2012 he became the youngest broadcaster to call a World Series game on Spanish television in the United States.

A long-time soccer commentator and reporter for FOX Sports, Rivera joined the network’s soccer coverage as a sideline reporter in the 2013 Gold Cup, and served as a feature reporter for FOX Soccer Daily on FS1. He covers major international tournaments and Mexico National Team games as a sideline reporter/insider. He has also called international and college soccer matches on FS1, FS2, Prime Ticket and FOX Soccer Plus. In June 2013 he became the first Mexican-born broadcaster on FOX Network.

Rivera has also worked with Fox Deportes, for 12 years, mainly as play-by-play announcer and reporter for Major League Baseball games across the United States. On October 24, 2012, Rivera became the youngest broadcaster to call a World Series game on Spanish television in the United States. He has also served as host and analyst of their NFL coverage, including Super Bowl XLVIII. He is also calls College Football action and hosts UFC events on the network.

Cortés, has a great deal of on-air experience having called NBA, NFL, Boxing, WTA and ATP plus Spanish, English, French and German Soccer league games since 2007.

He has also served as an official color analyst for Thursday Night Football for DirecTV Sports feed in LatinAmerica, and he has worked in a similar capacity calling Clippers games in Spanish for Fox Deportes Los Angeles for three seasons.

Cortés has also provided commentary for the 2012 Olympic Games in London and the 2010 Olympic Games in Vancouver. Moncada has also successfully worked behind the camera, working as a freelance producer with DirecTV Sports, Time Warner Cable Sports/Spectrum Sports and Fox Sports, Fox Deportes.