By Zach Dooley For LAKingsInsider.comOctober 9, 20180 CommentsOntario Reign
via Stockton Heat

The Ontario Reign will open the 2018-19 season with three static captains – Forward Brett Sutter will wear the “C” for the second straight season with forward Matt Moulson and Sam Herr joining him with an “A”. The three captains will also make up half of the Reign’s overall leadership group, according to Head Coach Mike Stothers, which also includes defensemen Kurtis MacDermid and Matt Roy, as well as goaltender Peter Budaj, who is currently up in the NHL on recall with the Kings.

Stothers mentioned that the three letter-wearers will not change game-to-game in any sort of planned basis as was the case last season.

“Last year, we had home and away, this year we’re just going to have the three,” Stothers said. “Of those three, Sutts is the only one that wore a letter last year, Moulson didn’t and Herr didn’t, but it’s not just left at those three, we have a core group of six which includes those three plus Dermy, Buuds and Matty Roy, those six make up our leadership group.”

Brett Sutter returns for his second season as Captain of the Ontario Reign, after he was named to the role in October of last season. As Stothers noted, Sutter comes from a terrific hockey background and brings top-level work ethic, mentality and character to the Ontario locker room.

“First, it’s an outstanding pedigree,” Stothers said. “[The Sutter family] is known throughout the hockey world for a number of brothers, uncles whatever you want to call it playing in the NHL. I was fortunate enough to play with Ron and Rich, really enjoyed playing with them and saw the work ethic and intensity that they brought every day and Brett’s the same. He’s another guy that’s just a wonderful person off the ice. Great family man, great husband and he treats all of his teammates equally and with great respect. The way he conducts himself, I don’t know if there’s a harder working guy on the ice during games, he hates to lose and he’s got a lot of experience both at the NHL level and the American Hockey League level. I’ve been pretty fortunate, I had a real good captain in Vinny LoVerde and then Sutts comes into the mix from a different organization and you just realize how valuable he is to us as a coaching staff.” 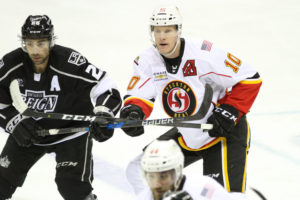 Matt Moulson wore an “A” on his jersey at times with the NHL’s Buffalo Sabres during his time in the NHL. and will now wear a letter this season with the Reign. Stothers has previously praised Moulson’s attitude and leadership qualities and echoed those sentiments when discussing his selection as an alternate captain.

“Moly is the kind of guy that, with his experience, he doesn’t necessarily need a letter but with him coming back this year and being with us for a full year, with the youth that we have on our team, he can be a real good example for those guys. In his situation, with all of the success he’s had in his career as a real, real good NHL player, to have the attitude he has to play here after, two years in a row, Buffalo has basically said you can go play in Ontario, he’s never let it affect anyone or himself. He’s a good example for the young guys that not everything’s going to go your way. Moly, he’s great with the young guys, he’s got Matt Luff living with him. He takes care of the young guys on the road and at home, takes guys out to dinner, has them over to his house, he’s just an awesome example of what you would hope for in a guy that’s kind of helping you to direct the team inside the locker room.”

The final alternate captain this season will be forward Sam Herr. Herr is now entering his third full season as a professional and has spent his entire career to date with the Reign. Herr brings a lot of things to the table that coaches like to see – reliability, work ethic and character – traits that Stothers noted in why he decided to make give Herr a letter this season.

“Sam’s just one of those guys that does everything right. He’s probably not the most well-known guy on the team in terms of statistics, but he’s well respected by his teammates. As a coaching staff, you have guys that you can count on to play in certain situations and know that the job’s going to get done. He never takes a shortcut, never takes a day off, brings the same work ethic and attitude with him every day and always does so with a good demeanor. It was pretty easy, just by the way he conducts himself on and off the ice, to put a letter on Sam’s jersey.”

Herr on wearing the “A” for the first time over the weekend
It was an honor. It means a lot to be trusted by the coaches like that, by the players. I try to work hard, I try to get guys to realize that’s what it takes and it’s nice to be recognized for it. It’s a huge honor to be there with Stutts and Moles.

On being named a captain alongside Sutter and Moulson
They’re the definitions of pros. They’ve been around for a while and they approach everything the right way, whether it’s hanging out with the guys, whether it’s getting better, working out or practicing, everything is done the way it should be. To be associated with those guys, to be put in that category means a lot. Those are two guys that I’ve looked up to as players, phenomenal players, they just do everything how it should be. I’ll try to pick up some things that they do as leaders and they do as players and again, it’s just a huge honor to be wearing an “A”, let alone in that group of people.

On whether or not his game changes in now his third year as a pro
A little bit. The core stays the same, coming in every day and trying to get better, that’s not changing, but trying to be a little bit more vocal. There’s guys out there that have been in my situation that I was in my first year so if they need someone to talk to I’m there for them. There’s going to be a learning curve for guys coming out of juniors or college so I’m just trying to show them the way, whatever they need I’m there for help. 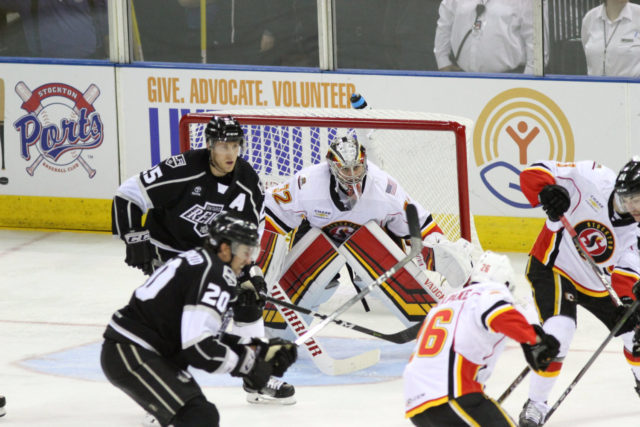