So, while there was a respectable amount of success, it was still an area that received attention over the off-season. Enter Ilya Kovalchuk, who’ll figure prominently into the Kings’ power play efforts. On Thursday, in their first extended power play work since Dustin Brown suffered a broken finger on Saturday that required surgery, per hockey operations, Kovalchuk skated opposite Adrian Kempe on Anze Kopitar’s unit with Jake Muzzin and Drew Doughty manning the back end.

What exactly is his role in this alignment?

“That’s our secret,” Kovalchuk said slyly. “Tomorrow you will see.”

He’ll likely shift between the left half wall, the left point and the left circle while the team is in possession of the puck. It was compared similarly to Alex Ovechkin’s positioning while waiting for feeds on the high-octane Washington power play during off-season correspondence. 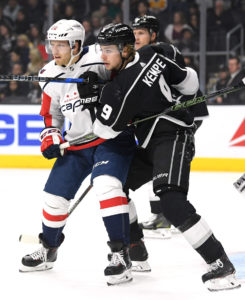 Interestingly, though, the most notable presence on the top unit belonged to Kempe, who skated in the role vacated by Brown. According to John Stevens, Kempe will get a look at a role that incorporates a net-front presence and goes well beyond simply “standing in front of the goalie.”

“I think the one thing you have to understand is that if the puck gets in a situation where that guy is not at net front, somebody else has to fill in and provide that type of support for the power play group, whether it’s puck recovery, puck going in the net,” Stevens said. “I think you’ll see at times you’ll have other guys going there, whether it’s Jeff, whether it’s Kopi, whether it’s Kovalchuk, but when you get in your set-ups, we’re counting on Tanner, who’s done a really good job at it, and Adrian believes he can be and can be a real threat to attack the net from underneath, as well. I don’t think it’s something where you just say you’re going to put a guy there and just go to the front of the net and that’s all there is to it. There’s a lot of detail that goes into that position, which we’ll continue to work at. But we like the fact that he’s a strong guy, he’s got good speed and quickness, he’s really strong on his skates, and he’s got good size that forces the goalie to look over him a little bit. We don’t see any reason why he can’t be good at it.”

Pearson will reprise his net-front role on the second unit, where he skated on Thursday with Jeff Carter, Tyler Toffoli, Dion Phaneuf and Alec Martinez.

And, of course, a clicking power play relies on so much more than elite shooters getting the puck on their stick in prime situations. Kempe should also grade well in advancing the puck up the ice and using his effective boards play to win pucks off the end boards and get them back to his teammates. He displayed an impressive willingness to compete and battle that helped him recover pucks even when he endured a scoring drought over the second half last year.

The numbers show that Kempe wasn’t the most effective power play option over his nearly 90 minutes of time on the man advantage. His production was very good at five-on-five, but on the power play, he ranked last among all Kings who logged at least 80 power play minutes in on-ice shots for per 60 minutes, goals-for per 60 minutes and shot attempts percentage. Alex Iafallo, who was used intermittently on the man advantage last season, will also rotate in when the situation calls for it – although probably not as a net-front option.

But despite the rotation and the middling metrics, there’s still a high degree of skill and tenacious work around the net inherent in Kempe’s play that should allow him to ably keep the seat warm in Brown’s absence.

“Puck recovery, for sure, on your power play is going to be really important, and also his speed coming up the ice and getting established in the zone,” Stevens said. “Jumping off faceoffs coming up with loose puck recovery, so we don’t see any reason why he can’t be successful there.”

Ilya Kovalchuk, on power play success:
On the power play, you’ve got to be ready to play anywhere because right now if you’re just standing still, it’s not going to work, so you’ve got to move around. I think that’s what we were working on the last few days.

Kovalchuk, on whether he’s feeling chemistry developing on the power play:
It’s easy to play with the great players. I just have to be myself, do the best of what I can. That’s why I’m here. I want to do my stuff.

Adrian Kempe, on his power play mentality:
It’s kind of the same thing. You’ve got to have the same mentality as five-on-five to get pucks back and stuff like that, so it’s no different than that. But, obviously we’re going to have more possession on the power play, and I’m going to try to hopefully do a good job in front of the net. It’s hard to take Brownie’s spot in front of there because obviously he’s one of the better players in the league in front of the net, so it’s going to be tough, but I’m going to do my best, and hopefully I can do a good job for us.

Kempe, on whether the coaching staff explicitly compared his net front role to Brown or Pearson’s:
Obviously both of them are really good in front of the net. I’m not as used to playing there as much, but I think I’m pretty big, so I can hopefully do a good job there. It’s hard to take Brownie’s spot there – obviously he’s so good at it. But I’m going to try to do my best and get a lot of pucks back and hopefully I’ll keep playing there, as well.