Etem’s camp; Whalers’ legacy; team “counting on” Campbell to back up Quick

Insiders. A good afternoon to you from El Segundo. The LA Kings took the Toyota Sports Center ice at 11:00 a.m. and aligned similarly to what they showed earlier in the week:

-All defensemen took the ice, with Derek Forbort skating to the left of Drew Doughty. The practice ran for a little over a hour with a good portion of the skate devoted to retrievals and transition in units, both with and without resistance. This was a typical detail-instilling early season session, with John Stevens stopping occasionally to get instruction in.

-The Kings assigned Boko Imama, Sheldon Rempal and Drake Rymsha back to AHL-Ontario, though Matt Luff, whose performance was praised by Stevens after Wednesday’s game, remained up with the club. The Kings have 31 players remaining in camp, 29 of whom are healthy.

-Jack Campbell had an off-night on Wednesday, and his preseason numbers – which should always be referenced with the proverbial grain of salt – aren’t anything to write home about. He’s had tough assignments, having played with a B-type lineup in Arizona and a C-type lineup in Anaheim, book-ended around a strong performance surrounded by a B-lineup in Vancouver, but he’s got a 6.02 preseason goals-against average and an .828 save percentage. Is the back-up goaltending position still settled? “I think that we’re all counting on Jack to be that guy,” Stevens said. “Jack came in last year and played extremely well. Got put in some tough situations. Not only Jack, but there’s others that are capable of playing better than they did last night. He’s a guy that we have a lot of confidence in. He knows he needs to be better, but we need to be better in front of him. But, we’re going to need him to win games. He’s a guy that we’re counting on to play that position right now, and we had the confidence last year when we traded Kuemper that he’s ready to do that.”

-The Kings are in an ongoing process to add skill to their lineup and think and play fast, and there are several roster hopefuls benefiting from speed as a primary asset. One, Austin Wagner, was a center of attention last night after he turned on the jets to create a breakaway and score on Ryan Miller before the veteran goalie was even able to get set. Another player is Emerson Etem, who scored for the second time in three preseason games and is happy with the consistency he’s demonstrated thus far.

“I thought I had a good start to training camp, but for me, I can’t have a bad day,” he said. “On a PTO, I just can’t afford to take a day off, and that’s been my mentality from the start, taking it day by day. That’s why I can feel at the top of my game. I think I’ve still got more. First off, I want to be in a game where we come out with a W.”

That hasn’t happened yet. He’s appeared in lineups that haven’t quite been full, having lost at Arizona, Vancouver (in a shootout) and Anaheim. But Etem has two goals over those three games, providing production and good legs for a team looking for just that.

“Right when I came here, the first thing I saw was ‘play fast,’ ‘think fast.’ It’s awesome to have that mindset, and it just makes it easy on my game. Everything comes after that, so it’s good,” Etem said.

“I think I’ve always known I can score goals, and I think I’m getting to the right areas. Whatever line I’ve been on, we’ve really come together and have been communicating on the same page at that sense. But I think at the same time, we’re giving up too many goals up in the games, and we need to help our goalies out. Our goalies are making tremendous saves, and I think when we’re out there as a group, when it comes to our line, we just need to make sure we’re on the right side of pucks and make sure we’re sound defensively.”

-Today In Triviality: The Carolina Hurricanes will wear Hartford Whalers jerseys on December 23 when they host the Boston Bruins. Might you be in the mood for last-minute Christmas shopping? The whale tail endures as an iconic logo that continues to be appreciated in Connecticut and beyond some 22 years after they departed for North Carolina. Don’t believe me? Ask Justin Williams:

With Stevens, Nelson Emerson and Don Nachbaur, the Kings have their own Whalers alumni chapter. Stevens played 44 of his 53 career NHL games for Hartford and was a key figure for their AHL affiliate in Springfield, captaining the Indians to a Calder Cup in 1991.

“When they came through that era with Ronnie Francis and Kevin Dineen and Dave Tippett and all those guys, they really established themselves as a pretty good hockey team, and they really endeared [themselves to] the people in that area,” he said. “It’s kind of an interesting market, because it is a small market around some big cities there. But the only way it worked there was that the team was extremely involved in the fabric of the community. I think that was the only way it could work there, so I think that might have a lot to do with it. I think we all remember the Whalers being in the league fondly.”

Indeed, there does seem to be an oversized, nostalgic attachment to the Whalers that resonates beyond their own small-market borders, and Stevens anecdotally referenced a Whalers jersey of his that was popular when his sons’ friends would come over and go digging through his old gear, along with seeing a hockey fan this past summer clad in a Whalers hat and jersey.

“When I was there, there was a big push on how involved they wanted to be in the community because it was the only way it was going to work,” he said. “I think everybody does that now – the Kings certainly do here. But in that small community, I think when they were, it really endeared them to the fans, [who] got to know them pretty well.”

The Whalers logo was briefly compared with the enduring Flyers logo, which then channeled the conversation towards Philadelphia’s brand new mascot, Gritty. “Not quite as iconic as the logo,” Stevens joked. 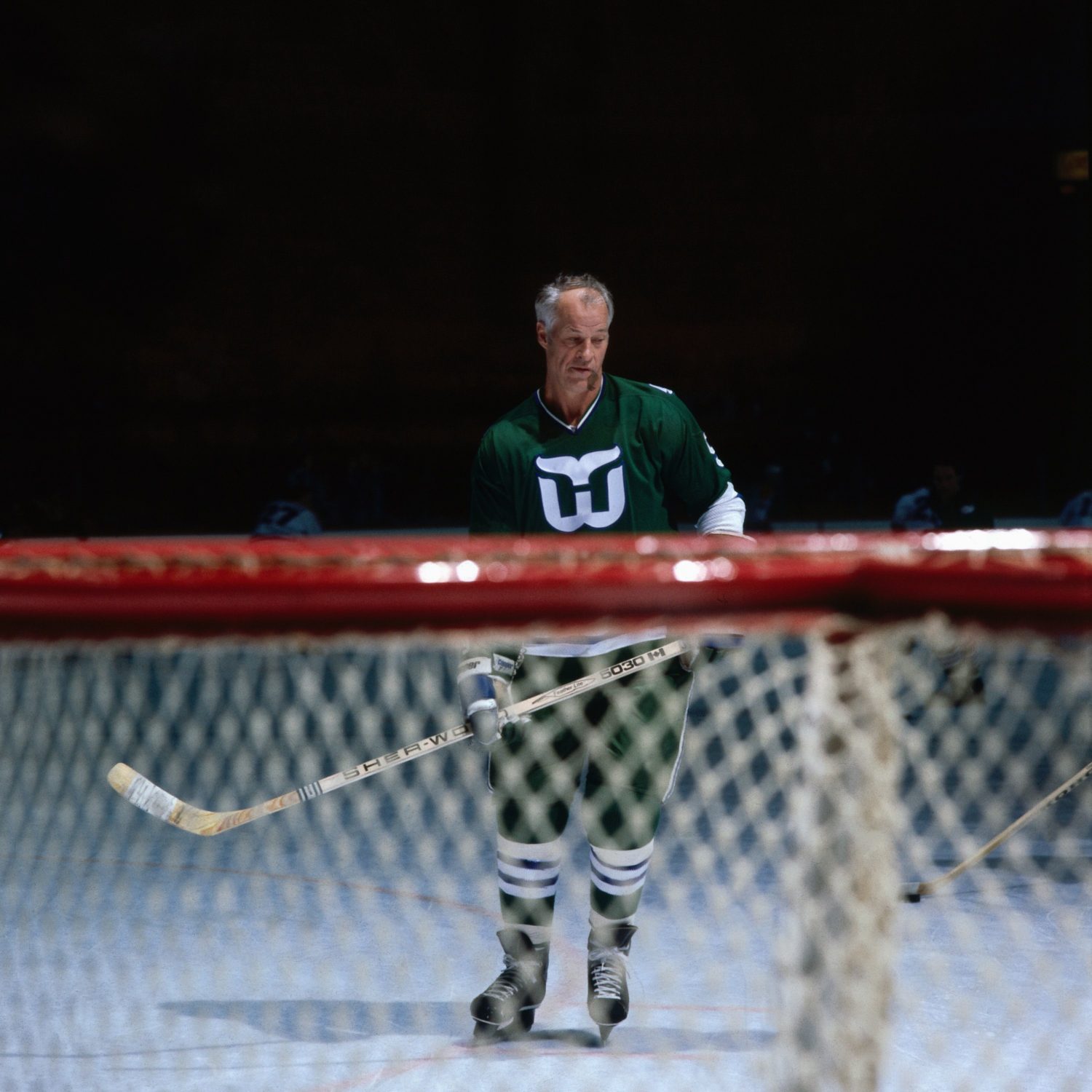