ANDERSON PLAYER OF THE GAME | The United States White Team breezed past a vastly out-Corsi’d and undermanned Finland team on Day 1 of the World Junior Summer Showcase, winning 5-2 on Monday while leading for nearly 58 minutes. 2017 fourth rounder Mikey Anderson, poised to become a two-year World Junior Championships contributor on defense, was named the player of the game after he netted the winner late in the first period when he jumped into the rush and chipped in a feed from 2018 Philadephia first rounder Joel Farabee. This follows his solid development camp showing (on top of his NCAA championship) in which he exhibited poise in making plays, relieving his defensive partner and getting the puck up-ice. Checking around this morning, Anderson has left an impression in his ability to move the pucks out of the zone and in transition. While his goal was the reward for an overall solid performance, Anderson displayed good defensive instincts and cut down on zone time by shutting down plays quickly and moving the puck out of the zone. I’m told Rasmus Kupari was also solid for Finland in the game and narrowly missed out on several chances.

With Anderson, there’s no need to get caught up in a summertime camp game against a Finland team that was without several key players, but he’s a balanced player with a good, competitive streak who has shown good poise in his defensive end and can move the puck. The likelihood that the Kings have someone who’s going to play is trending in the right direction.

KUPA DE ORO | Regarding Kupari: Not that this is any sort of pressing or controversial matter, but don’t expect him to return to Southern California for training camp or the Las Vegas prospect tournament. His Liiga preseason runs through September 9, and his regular season opens when Karpat hosts Kuopio-based KalPa on September 15. (Many European teams opened their preseason schedule last week, including SKA, who welcomed Pavel Datsyuk back for training shortly after he turned 40 years old.)

Generally European players who have already rejoined their clubs – Kupari was officially loaned on July 20 to Karpat, with whom he has one season remaining on his contract – will not be released to return to North America for training camps, and after checking in with hockey operations, it’s likely that will apply to Kupari as well. The team seems completely content with how his development could branch out from his upcoming season with the defending Liiga champions, who invested considerable trust in Kupari in his 17-year-old season. It’s possible Los Angeles requests him, but again, there appears to be a good fit between Kupari and Karpat, with whom he’ll look to continue to widen his role.

On Tuesday, Kupari was right back at it at the summer showcase, centering Finland’s top line against Sweden. He recorded an assist and scored a shootout goal in Finland’s 4-3 shootout win.

The 15 Finns to have ever played for Los Angeles, based on games played with the club, are Juha Widing, Jari Kurri, Aki Berg, Mikko Eloranta, Jere Karalahti, Peter Ahola, Olli Jokinen, Marko Tuomainen, Kai Nurminen, Esa Pirnes, Mikko Makela, Jussi Jokinen, Ilkka Sinisalo, Arto Blomstein and Lauri Tukonen. That list excludes Tomas Sandstrom, who was born in Finland but raised in Sweden and represented the Swedish national team, as well as Kimmo Timonen, who played in 1,108 NHL games but none with the Kings, the team that drafted him in the 10th round in 1993. With 131 goals and 342 points in 502 games from 1969-77, Widing is the highest scoring Finnish L.A. alum.

Not at all related, but since we’re on the subject of alums:

Great to welcome back from Kings netminder Stephane Fiset who visited the team offices today with this family. He also made himself at home in Luc's office! pic.twitter.com/jK5Up2E41s

JAROME | There has been a tremendous amount of respect paid across the hockey world to Jarome Iginla, who, prior to the press conference officially announcing his retirement, shook hands with everyone in attendance.

There are a number of great retrospectives of Iginla’s career, but my favorite has been this one, written by Eric Duhatschek of The Athletic ($) and focusing on a number of anecdotes from former teammate (and former King) Craig Conroy. The best story involves Darryl Sutter, who had chewed out Conroy and Iginla during a meeting of the team’s leadership committee the night before a game in Montreal in the 2002-03 season. That game did not end up going well.

“So obviously, being competitive, you want to prove Darryl 100 per cent wrong. So next day, first shift against Montreal, we go out there and get scored on and now we’re skating back to the bench and Jarome says, ‘that didn’t start well.’ I’m like, ‘you think?’ Darryl’s standing there, making that face, arms crossed, not happy, but he didn’t say anything that time. Next shift, I was coming around the net, in good position, but out of nowhere, Saku Koivu jumps down between us, and picks off a pass, goes in, scores. Now it’s 2-0 and it’s only six minutes into the game.

“This time, we come back to the bench, and Darryl starts in on us. ‘Oooh, it’s scary out there in big, bad Montreal. Look at all those banners.’ You can just imagine Darryl, giving it to us. We were sitting there in the middle of the bench and Darryl says, ‘hey, hey, if you’re going to be sitting here the rest of the game anyway, may as well do some work. Conny, you go down to the D and open the door for them. Jarome, you just run the forward box. You guys need a break tonight – because it’s too scary for you guys. We just sat there, the whole rest of the night.

I was actually looking for several Darryl musings on Iginla from past LAKI pages but didn’t find anything that really captured my eye (though there was a November 15, 2016 quote that hit on several familiar Darrylisms). But for Iginla to end his career in Los Angeles, playing under Darryl Sutter, offered an emotionally serendipitous footnote to an otherwise forgettable season. He didn’t make the playoffs, but he didn’t play out his career with last-place Colorado, either. There were important games down the stretch, battles waged, and though it didn’t offer any happy punctuation, Iginla did his part for the Kings. Such as when his captain was clobbered by an opposing irritant and he had something to say about that — in the Saddledome.

There were other moments that stick out about Iginla’s tenure with Los Angeles, in which he scored six times in 19 games while wearing uniform #88. He always had time to carry on with media and reporters. This has been said about Iginla throughout his career and was certainly true in and around the Kings’ room. He shared his own, private praise for Bob Miller during the team’s celebration of the Hall of Famer’s career. And I’ve shared this before, both on the site and in passing, but the most memorable off-ice moment during Iginla’s tenure took place as the team exited the bus at Rogers Place in Vancouver on March 31, 2016, two days after the ruckus in Calgary. Iginla and Dustin Brown were, along with Marian Gaborik, the most veteran players on the team and sat in the rear of the bus. That made them two players who entered the arena right in front of club media and broadcasters, and on that morning, the two were locked in huge smiles, deep in a conversation that gave the impression they’d been friends for years, and were not, say, two players who’d punched each other in the face the previous pre-season.

Behind all the respect for Iginla as an honest team leader and a captain, as a humanitarian and a family man and a professional, there was also an instant likability that could be much better described by those who’d covered him for longer than some of us in the L.A. media have. (Like Duhatschek, who also wrote this excellent piece.)

There are no concrete plans in Iginla’s future other than to spend additional time with family. He underwent hip surgery before setting in motion his attempt to play in 2017-18, whether for the Canadian Olympic team or elsewhere, but did not advance past practicing and conditioning with the Providence Bruins, just down the road from Boston, where he resides with his family. In 20 seasons and 1,554 NHL games, Iginla totaled 625 goals, 675 assists and 1,300 points. He leads the Calgary franchise in goals (525), points (1,095) and games played (1,219). 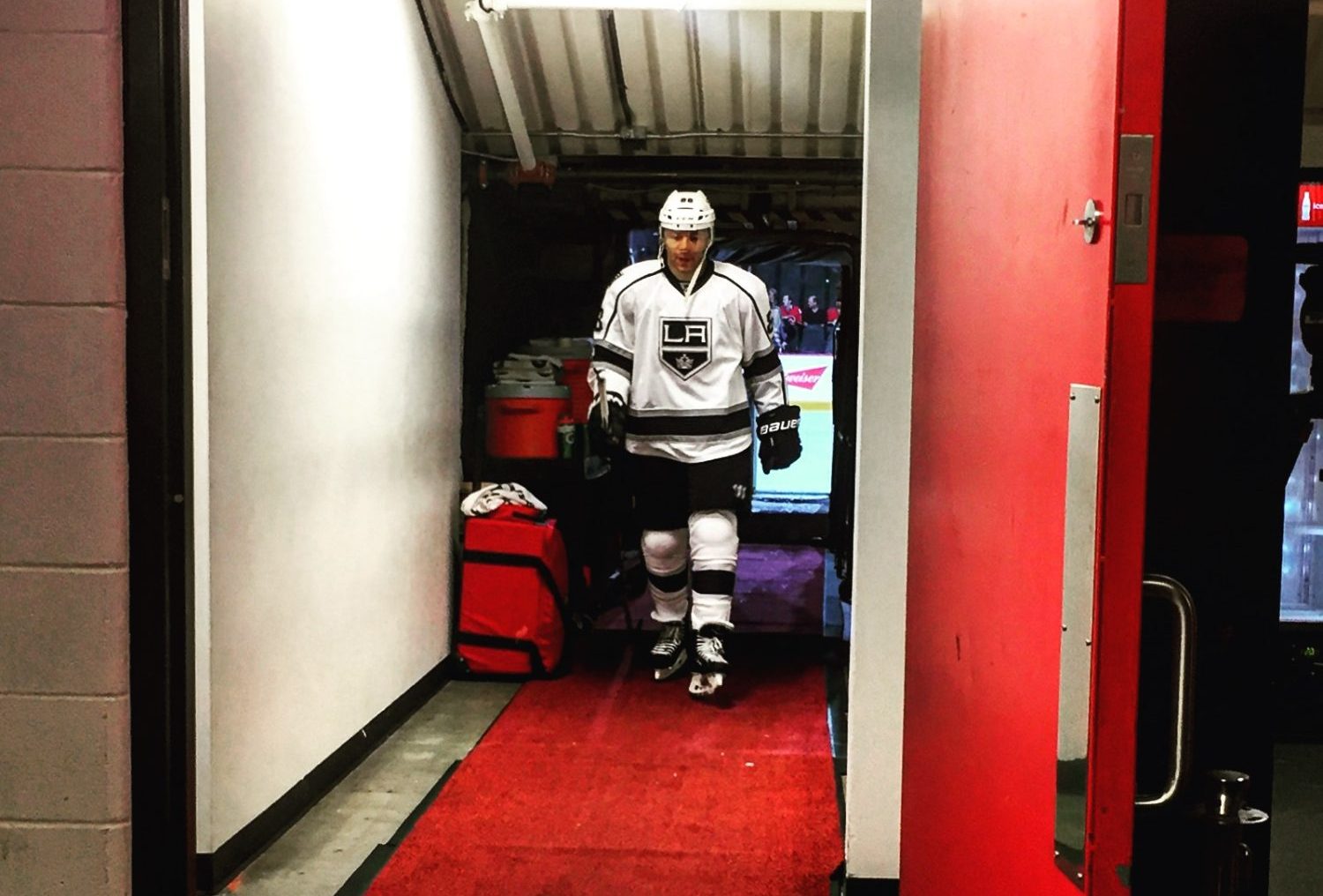 After saluting the crowd in his final game in Calgary. (Jon Rosen/LA Kings Insider)