-The origin of John Stevens’ coaching career came in the midst of a 1998 Calder Cup celebration when Bobby Clarke pulled him aside in the Philadelphia Phantoms’ locker room and encouraged him to attend Roger Neilson’s Coaches Clinic. Over the last 20 years, he’s attended the late Hall of Fame coach’s retreat both as a student and as a presenter.

It’s not exactly on the same scale, but Stevens held his own “coaches summit” in El Segundo during the Kings’ development camp, punctuating a lengthy two-plus months of evaluating the tactical, analytical and communicative processes that guide and drive the club’s performance by sharing his efforts and technique with a group of coaches from inside and outside the organization. “It’s something I’ve wanted to do for a long time,” said Stevens, who used large blocks of time in the afternoons when the prospects weren’t skating to run ideas and approaches through a group of eager minds and hold a number of different meetings.

All Kings coaches were assigned a project. Stevens “went over how we track our offense” and was joined by Don Nachbaur in that thrust. Dave Lowry offered a presentation of the penalty kill. Video Coordinator Samson Lee put together a project on one-timers; also presenting was Brooks Bertsch, the video coordinator the last two seasons, and Bill Ranford, who put together a study on net-front presence. Mike Stothers, a familiar presenter at Neilson’s clinic, offered a presentation on communicating with players from college and junior hockey as it related to player development.

They weren’t only speaking internally; a mix of other coaches from a variety of levels also joined the summit. In attendance was Scott Sandelin, the two-time and defending NCAA champion head coach of the University of Minnesota-Duluth’s men’s team. Sandelin, like Stothers, was a teammate of Stevens’ in the Philadelphia organization and provided a voice on several offensive philosophies. So did Jerry Keefe, the Associate Head Coach of Northeastern’s men’s team, who helps run the Huskies’ elite power play. OHL stalwart and Brampton and North Bay Battalion coach Stan Butler attended, as did Stevens’ nephew, Justin, who completed his first season as an assistant at the University of Guelph in 2017-18. The AEG-affiliated Eisbaren Berlin coaching staff took part; Junior Kings and Junior Reign coaches were also spotted among the coaches during development camp.

“A lot of our development guys, when they had time, came in there,” Stevens said. “It’s just a good opportunity in a casual setting to sit down and go over details and get peoples’ opinions and share ideas. We were trying to share some of the stuff that we do with them that they probably haven’t seen – even our minor league guys – so there’s a little more transparency in what we’re doing. But, for sure, get some ideas from some really smart hockey people at all levels. The college guys do a great job, and they see changes in the game with the young players.”

“Scotty [Sandelin] actually coached Alex Iafallo and he has Mikey Anderson, one of our draft picks. So, it’s just good to interact with those guys, and even when we’re not in the ‘summit’ part of it, there’s all kinds of interaction, sitting down and asking about certain things, ‘what do you think about this?’ I find it an invaluable learning experience. I probably learned more this week than I have in any coaching seminar that I’ve been to in 20 years, just because you have the intimacy of sitting down and spending a lot of time with these guys. I thought the coaches did a great job and really put a lot of time and effort into it, the ones from here, and I thought the guest coaches were terrific. I’m not sure if it’s an annual thing, but it was certainly a really enjoyable thing this year.”

The immersion came at the end of the coaching staff’s comprehensive post-season review. (This, let’s face it, may just be a fancy way to say “the Kings are continually looking at ways to improve scoring” and spent a lot of time since April looking both inward and outward.) But, dating back to the Neilson Clinic that he attended, Stevens has always been receptive to listening, learning and sharing his own background with others in his field.

“Being here, we’re here from six in the morning to six at night every day, and we had a chance to go out for dinner with all those guys last night. I think it’s those opportunities throughout the day where you can sit down at a desk and grab a whiteboard or exchange drills or talk about different situations on things they’ve tried that have worked. We’re not all going to do what everybody else is going to do, but I think just hearing what other coaches have to say that have had success in the game at different levels has been really good for us.”

Several other housekeeping and development camp notes from John Stevens:

-Trevor Lewis (hand) is “doing great,” post-surgery. “Lewie’s 100% moving on,” Stevens said. Dustin Brown (shoulder) is coming along, too, and there’s no grave concern that his rehabilitation is going to mesh too disproportionately into his seasonal preparation, per Stevens. “Brownie’s where we thought he’d be at this point. He’s back east now. I talked to him the other day, he felt things were going well. You don’t like to see a guy in a rehab situation. You want him to be training. But we feel like he can be fully rehabbed, fully trained, ready to go.” 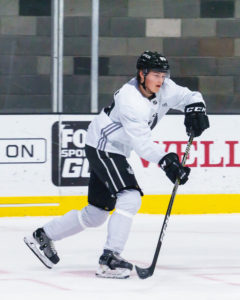 -After meeting the newest prospects and their families at the draft, at development camp Stevens got a first-hand look at both the roster hopefuls, including Gabriel Vilardi, and the newbies, such as top pick Rasmus Kupari. “I was kidding with Jussi [Kari-Koskinen], one of our European scouts,” Stevens said. “I said before the draft, ‘go get us an other Kempe,’ and he laughed. He said, ‘we’ve got another Kempe.’ [Kupari] skates like Adrian. He’s an explosive guy, he’s got great hands, really nice kid.”

Stevens noted the camp’s skill level and the progress shown from players who’d attended previously. “You see Vilardi and [Jaret] Anderson-Dolan and some of those kids that are a kids that are a year older, and then [Kale] Clague and [Chaz] Reddekopp who’ve been around a little bit younger, and then you see these young kids coming in with Rasmus and Akil [Thomas] and those kids.”

-It was too early to get a clear picture of Vilardi’s on-ice readiness. Because he was kept out of development camp and training camp in 2017, last week represented the first appearance at an official Kings camp by the player selected 11th overall last summer. Still, Stevens noted the forward’s size, hands and good vision on the ice. “You can see why he’s a first round draft pick,” he said.

“You look at Iafallo coming in last year, he looked really good, too, in the summer. So, now we’re always [saying], ‘how’s he going to do in the next phase? What’s he going to do in rookie camp? Is he going to be able to maintain that level of play, and then what’s he going to so when he gets to main camp? And in Alex’s case, he just kept getting better and better and better, wasn’t intimidated by the situation. The skill set and the confidence he had in development carried into the rookie camp, carried into the main camp, carried into the season. Some kids can do that, some kids can falter on the next step and need more time. So [Vilardi will] get the opportunity in those situations, and we’ll evaluate him as we go along.”

-Tangentially related to Vilardi: it appears the Kings will be a part of a rookie tournament this coming year. Finishing touches are being laid on a showcase that would include prospects from the Kings, Golden Knights, Sharks, Ducks, Coyotes and Avalanche and would be held the second week of September at the Golden Knights’ practice facility in Summerlin. There’s a possibility that future installations will be held at Toyota Sports Center in El Segundo. More on this topic in the coming weeks.