Waking up with the Kings: April 14 - LA Kings Insider

Waking up with the Kings: April 14

With the type of circumstances as there were in Game 2, there was a bell curve in the probability of winning after the LA Kings had tied the game. That win probability reached its apex while Los Angeles got its game going in the third period and remained relatively high through the first 10 minutes of overtime, which included a glorious Anze Kopitar look from the slot. But as the minutes ticked off, and overtime gave way to second overtime, a team that did not have the services of three of their top four defensemen and was so crucially reliant on Jonathan Quick and an overtaxed group of Alec Martinez and Dion Phaneuf and – wow, Oscar Fantenberg! – simply couldn’t hold on for a great deal longer against a team that had benefited all season long from its depth and simply outlasted an undermanned L.A. group in a remarkably gutsy effort that dropped the team to 0-2 in its first round series. By Erik Haula’s game-winner, the Golden Knights, who had their minutes more evenly spread out, outwaited the Kings, who were forced to allot 41 minutes to a player who appeared in one game over the second half of the season. They battled. They battled in the face of a league verdict they did not agree with, amidst injuries that a team with lesser constitution would succumb to faster in a house so hostile to visitors, against the seemingly arbitrary enforcement of borderline judgement calls (without the benefit of a whistle on Brayden McNabb’s elbow to Anze Kopitar’s face directly in front of the referee in overtime on a non-hockey play) and in front of a goalie who through two games has shown to be as dialed in as he has been during any playoff run. But moral victories mean nothing in the playoffs, and the Kings couldn’t steal a game amidst some openings to do so, and will now turn to their own home ice and rabid support to gain footing in a series they trail two games to none. 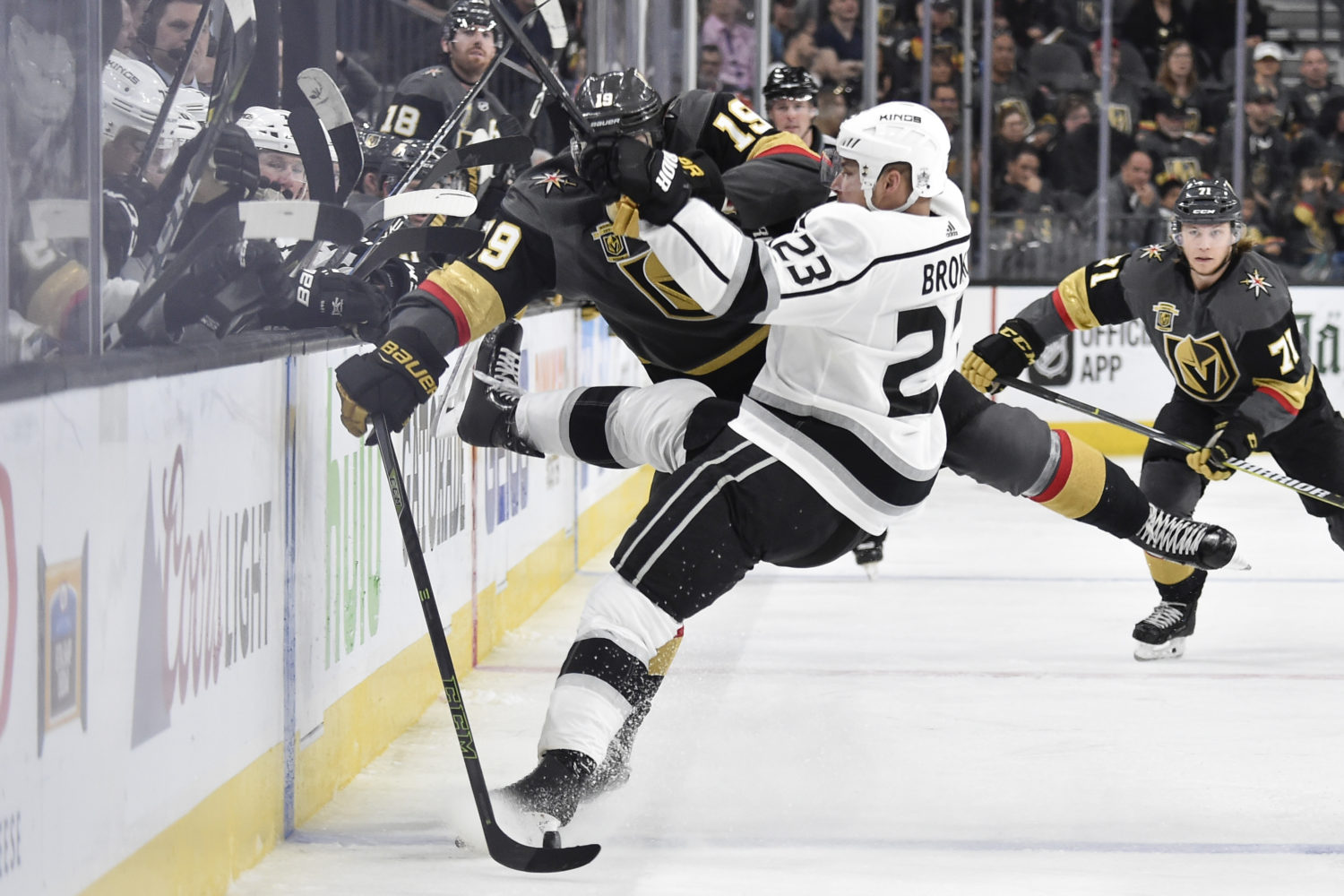 Because they were down three of their top four minute-eaters on defense, which included the league’s ice-time leader and the best defenseman in the world, this was clearly going to be a game that the Kings were going to be out-shot and out-chanced and, importantly, would struggle in exiting their defensive zone, which would put a wet blanket on their prime scoring chance ceiling. Opportunism would have had to be key, as would a win in the special teams battle. Instead, there was a stalemate. Vegas finally broke through against Los Angeles on the power play, using a springy end boards carom to jump ahead in the first period after Alex Tuch had found space behind the defense. The Kings answered on the power play late in the second as Dion Phaneuf found Paul LaDue, who relied on the presence of Tanner Pearson in front of the net, which drew Deryk Engelland into a shooting lane and produced a deflection off the Golden Knights defender. Other than that, and the scattered chances Anze Kopitar’s line continued to generate off the rush, there wasn’t much in the way of anything that would be counted on to beat Marc-Andre Fleury, who is yet to get beat by anything that wasn’t a deflection through the first two games. After Kopitar’s overtime bid sailed wide, and Los Angeles was unable to take advantage of their overtime power play, their bell curve of win probability sharply sloped downward. On the other hand – and again, moral victories are meaningless in the postseason – their penalty killing laid its guts out there, with defensive pairings of Alec Martinez and Christian Folin, and Oscar Fantenberg and Kevin Gravel keeping the puck out of the net in double OT prior to Erik Haula’s game-winner. 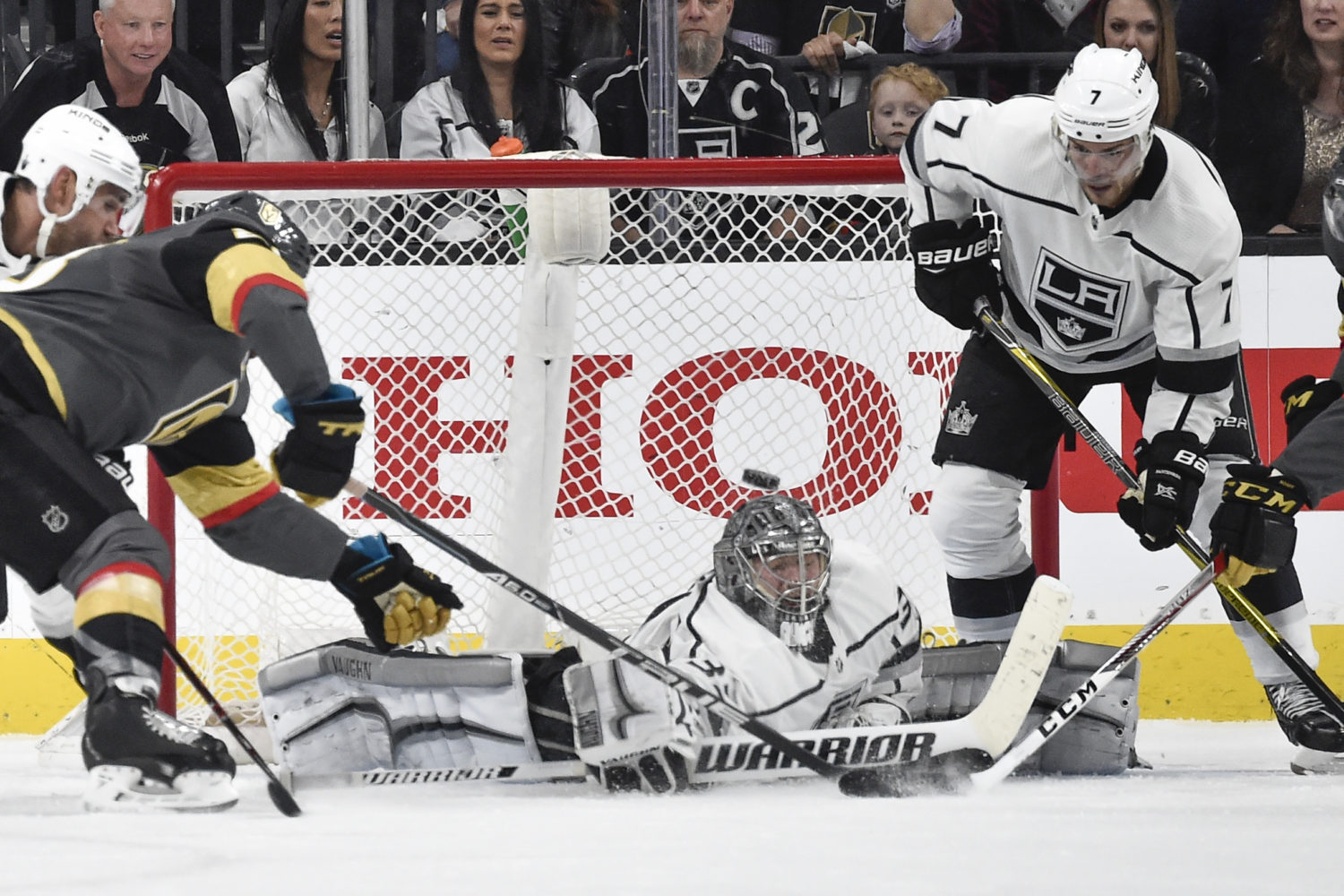 While we can wax poetic about certain players – Fantenberg, one would assume, has played himself comfortably into his next NHL contract with his first two career playoff games, while Martinez, Phaneuf, LaDue and others embodied that next-man-up creed – there are also some that will have to imprint their mark on this series if the Kings are going to advance. We can talk about Tyler Toffoli’s two drawn penalties and six shots on goal in Game 1, or his power move to the front of the net that Fleury denied in overtime, but again, this is a results-based league, and he hasn’t scored an even-strength goal since March 15. In his last seven playoff games, he has one assist and a minus-six rating, an uncharacteristic run for a player with a nose for the net who has shown a battle aptitude and willingness to go where goals are scored. Again, much of the root of the offensive woes starts on the absences to three important defensemen, especially given the team focus in which opportunities come from sturdy, committed checking. But at some point, those paid to provide offense simply have to do so. The cards were stacked against them, and in the end, the gutsy, pulling-the-rope team-wide effort was unable to lend itself to the good fortune and opportunism in the third period and in overtime when the window for a potential victory had been wedged open. 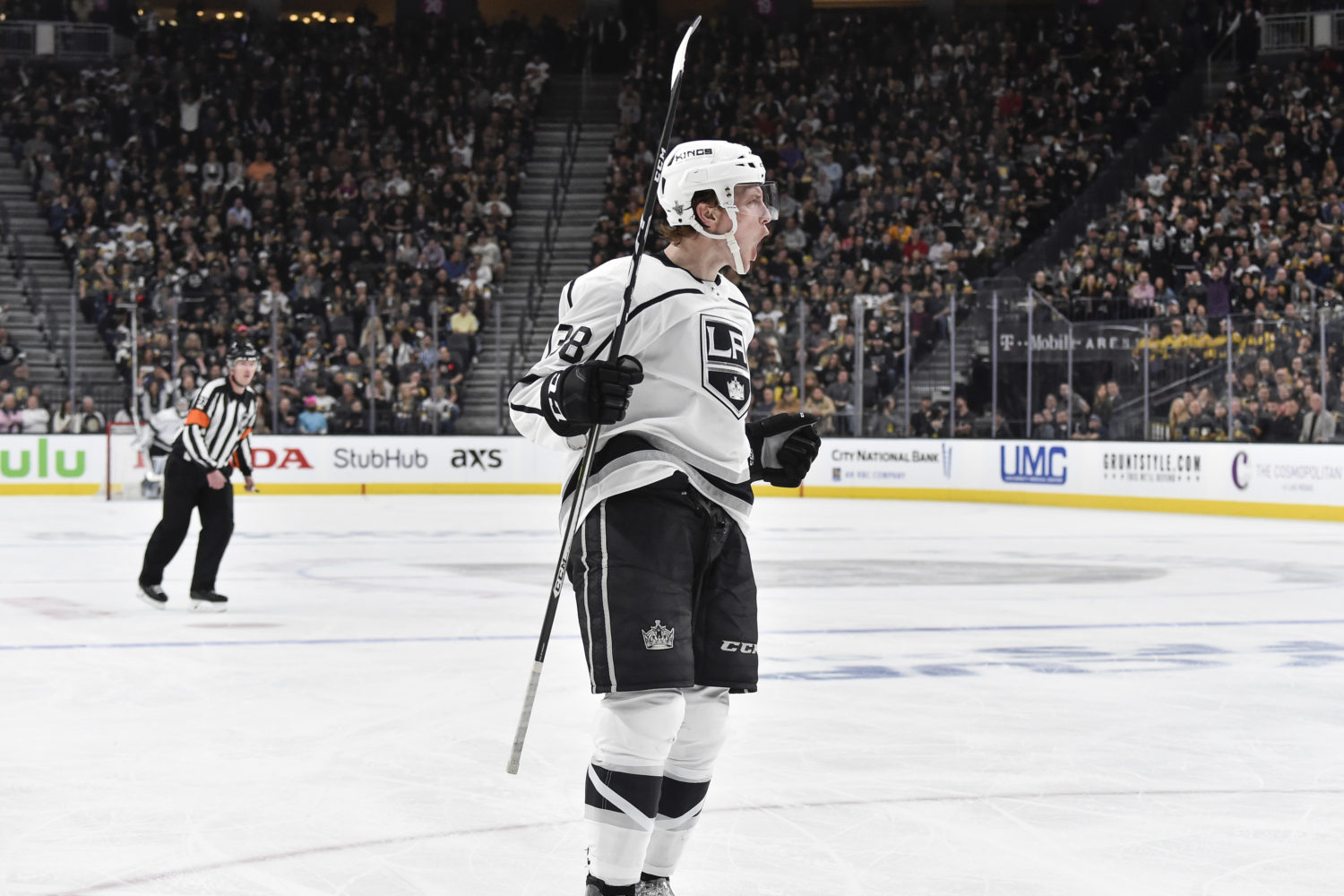